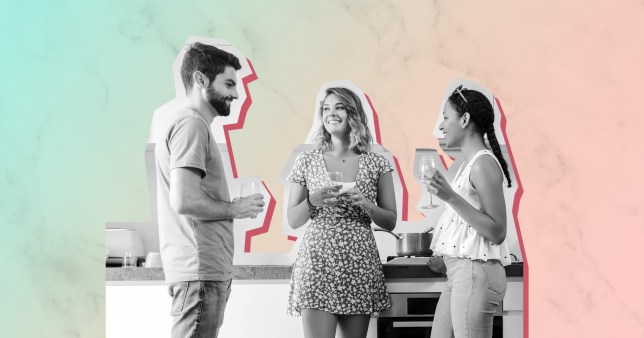 You can sort this (Picture: Getty/Metro.co.uk)

You’re in a houseshare and you’re getting on great. The bins are taken out. You watch the same TV shows. You’ve even got a toilet roll rota.

There’s just one problem: your housemates just keep clogging up the drains.

The kitchen sink takes ages to empty, and it’s starting to smell. The bathroom plugholes are packed with hair.

You know this needs to be sorted. After all, clogged pipes aren’t just annoying on an everyday level, but stuff that shouldn’t be put down drains making its way through our waterways can have a longterm impact, from needing costly repairs to damaging the environment.

How do you tackle this without sounding preachy or nagging?

Don’t stress, we’ve got you covered.

Make sure you’ve got plenty of bins

Look, if you don’t have a little bin in your bathroom, you’re asking for your housemates and their guests to flush things down the loo… which is not a good thing to do.

Make sure your flatmates are actually able to correctly dispose of makeup wipes, tampons, and so on by ensuring there’s a bathroom bin just for that purpose.

In the kitchen, ensure you have a bin that’s big enough to accommodate all the household waste (and take out the bin bags when needed, please), and try getting a little compost bin for any food scraps and so on.

Do your housemates know that you’re actually not supposed to tip oil down the sink? Were they aware that flushing tampons can cause all sorts of issues?

We wouldn’t be surprised if they had no clue. This isn’t something we were taught in school and it doesn’t often come up in conversation.

Sorting out constant blockages might be as easy as popping one of these articles in your house’s group chat and admitting that you didn’t know about these plughole-related rules until now.

If you’ve done the subtle steps above and the problem persists, it’s time to have a direct conversation. Sorry, we know it’s awkward.

Avoid blame and high emotion – remember that it’s pretty unlikely your housemate is deliberately blocking the sinks just to spite you, and you’d all like to live in a space where everything works and the water flows freely.

Therapist Dr Natalie Cawley tells Metro.co.uk: ‘Conflict is always difficult when cohabiting and having standards that don’t align with others.

‘It’s important to try not to “blow things up”- consider that the person doesn’t pay as much attention to detail or uses the shower to prepare mentally for work and simply hasn’t noticed, it’s not a sign of lack of care or disrespect.

Try to take the emotion out of the conversation beforehand, so reflect on your own reaction, has this made me disproportionately angry? Am I using this as a starting point for all or nothing or black and white thinking, such as they always make a mess and disrespect the living space.

‘When telling someone something if they feel attacked, belittled or shamed in any way the automatic human response is to defend.’

The moment things get defensive, the issue’s been blown out of proportion and it’s going to be tricky to fix.

Natalie advises posing the issue ‘from a point of vulnerability’ rather than superiority.

She suggests saying something like: ‘You know when the plug is blocked it really goes through me and I can’t stand to touch it so I’ve bought this unblocking fluid we can use instead, I’ll pop it in the bathroom that should help.’

Psychotherapist Sam Nabil backs this up, saying that ‘avoiding blame is alrways the best solution’ and recommending the use of ‘I feel’ statements.

‘Whether you believe the other person is at fault or not, by taking personal responsibility for your own feelings, this completely disarms the other person and allows you to work together to solve the main problem,’ he explains.

‘When you express your emotion, don’t say “I feel angry or upset when you…” or What I need is for you to do something to make me feel better. The use of the word “you” is accusatory and places blame on the other person.

‘Living with housemates is a group activity and its in everyones best interest to live and co habit as a team.’

Once you’ve explained the problem and made your housemates aware of the effects, it’s time to move forward in a better way.

Agree to never flush wipes and tampons, but to bin them, and come up with a system for disposing of oil and grease that works for you.

Chat these rules through and make sure everyone’s on board, rather than leaving passive-aggressive notes above the sink.

‘Having communication about your lives and routines is always the best scenario to have in a household,’ says Sam.

‘Make the conversation light and funny, but also be sure to address what’s really bothering you. It may be tough, but know you’re also laying the tracks for a healthy co-living relationship.’