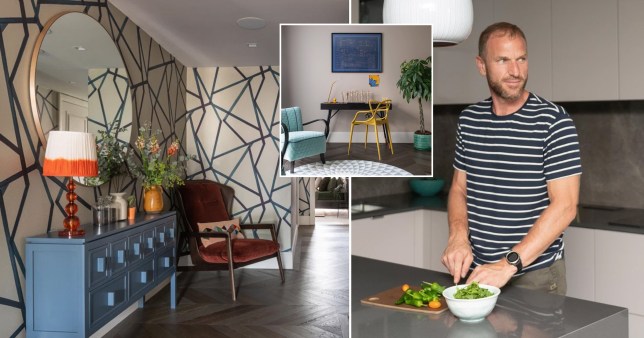 Chris McDonagh moved out of London in his early teens but always promised himself he would one day have his own property in the city he loves.

At 47 years old he has finally realised that dream with an upmarket three-bed apartment in Hampstead that takes visitors through a journey of Chris’s fascination with the UK capital and his love of house music.

Situated on a leafy road minutes from Hampstead Village, the property is a new-build that mingles with Grade II-listed, converted heritage buildings and semi-wild open spaces.

Chris grew up in west London, before moving to Buckinghamshire, and felt the apartment was perfect for mixing the dual aspects of city and country living he had experienced through his life.

‘It feels like being in London but not in London,’ he says. ‘The flat is very contemporary but you don’t hear a lot of cars, or loads of noise – I see a lot of green from my kitchen. You don’t have to feel the intensity of London.’ 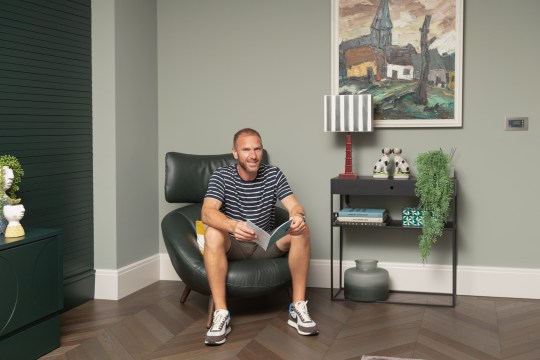 Chris was single when he moved in, but resisted the temptation to create the archetypal bachelor palace of white walls, strategically placed low-maintenance plants and a few dashes of chrome.

Mindful of wanting to have something more unique and characterful, as well as something that reflected his London life, Chris called in Lou Wolfenden of House Of Wolf Interiors.

Chris had recently changed career and left everything he owned either in his old home, or given it to charity – it was quite literally a new start.

‘I wanted to make it feel like it had personality, warmth and character. My last flat was white and bright, I wanted something more unique,’ says Chris.

‘I was single at the time [of moving in] and I wanted Lou to steer me away from that heavy, blokeish look that is dominated by a massive TV. I wanted softness coming in – normal bachelor pads don’t connect, they don’t feel lived in. Guys know what they like and go for it. Lou added a female touch to it.’

While the property has a flowing, open-plan feel, it was fairly nondescript upon first viewing. Chris wanted to create a wow factor to the entrance that would take him back to London’s early 1990s clubbing heyday. 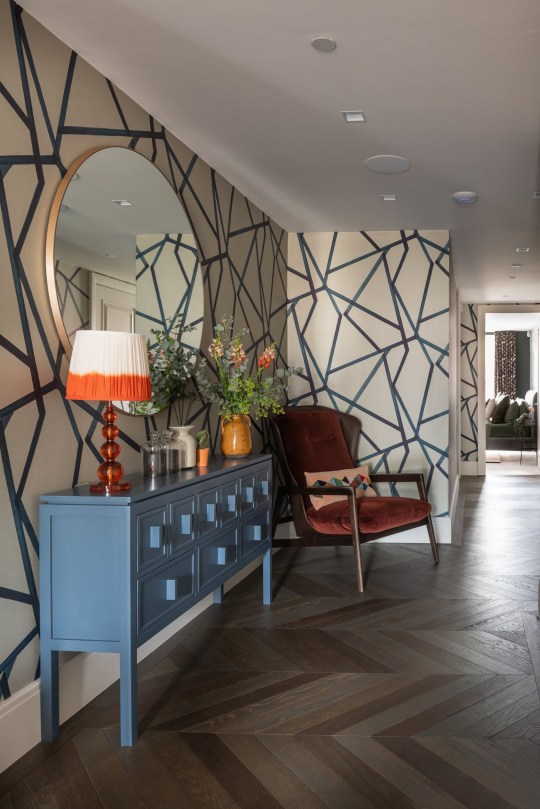 The hallway, normally a more sedate part of any house, is an event, like stepping foot into the Gardening Club or Bagley’s. Sumi wallpaper by Harlequin, with its large-scale, brushed abstract geometric shapes, bamboozles but at the same time leads visitors in.

The burnt orange chair by BoConcept continues the general clubbing theme with some laid-back 1970s disco glam. The main living space has a cosy, warm aesthetic that echoes a private Shoreditch club or a VIP room – the perfect place to get away from the hubbub.

Chris was originally set on white in every room, but settled on darker shades – the living room is Pigeon by Farrow & Ball – while the BoConcept sofas in navy velvet and soft furnishings continue to bring moody hues that nod to the cloudiest of London days.

The green console in the living room is made from an old gas canister and the cushions, perhaps fittingly, are from Ibiza. 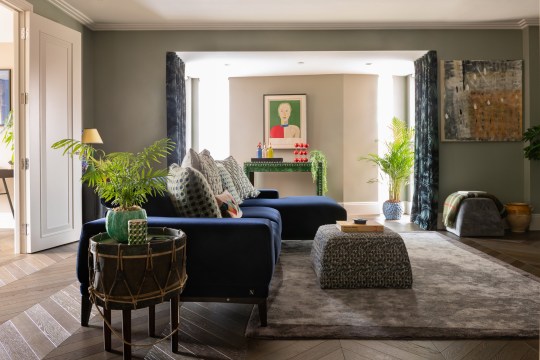 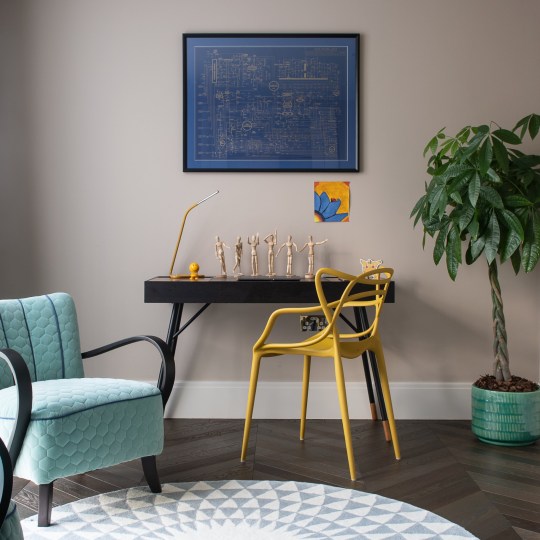 Chris’ music room is a homage to his love of house music (Picture: Sarah Rider) 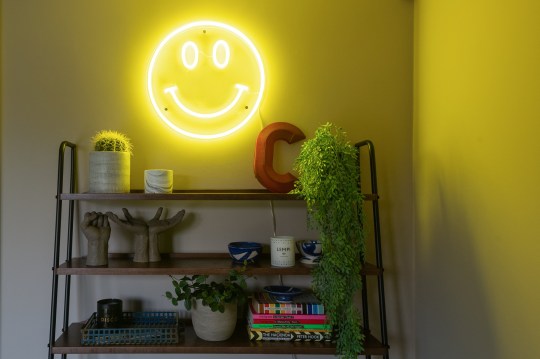 ‘I was tempted to play it safe but realised I was fed up with off-white and a bit of grey – all a bit too sterile,’ he explains. ‘With these darker colours, it has a cosy warm feeling in winter but also feels cool and relaxing in summer.’

What was going to be a formal dining room is now a music room, with books on DJs and clubbing history. Lou found the pair of vintage chairs at Kempton Antiques and had them reupholstered in Kirkby Design fabric, while the smiley face neon is by Bag & Bones.

‘A smiley face for a happy place,’ laughs Chris. ‘We were always into the music scene back in the day. That’s a nod to the years of the good times and not having any responsibility. We tip our hats to our music past.’

The Acid House Love Blueprint shows a history of dance music and rave culture mapped out on the circuit diagram of a 303 bass synthesiser. The paint is Jitney, again by Farrow & Ball.

Lou says: ‘I think the key to new-builds is adding some character or else they can come across as very bland. Texture was really important to me as was the use of materials. There were some shiny new pieces, so I wanted to contrast them with really old vintage and well worn pieces to add some depth to the scheme.’ 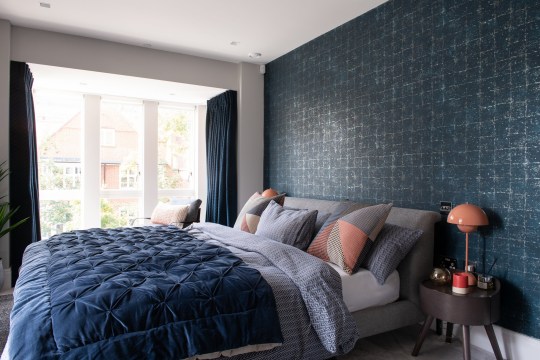 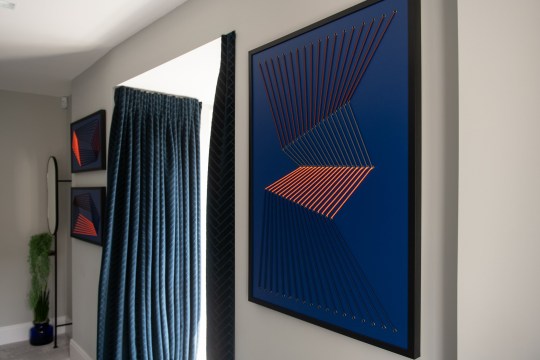 The flat is filled with abstract artwork (Picture: Sarah Rider)

Throughout the apartment, artworks constantly refer back to Chris’s love of the capital. A gold foil artwork of London in the main guest room is by Jayson Lilley. In the kitchen is a Norf/Sarf limited edition art piece by Dave Buonaguidi.

An artesian map of London by mapmaker Stephen Walter for Newmor covers an entire wall of the master suite. ‘I chose to accent the navy and grey of the master with some pops of coral to deliberately move it away from feeling too predictably “bachelor pad” and masculine-cliched,’ says Lou.

The master bedding is by Cox & Cox and cushions by Margo Selby.

Chris continues: ‘This is the first place I have bought in London on my own and I wanted to recognise the city. I moved out of London when I was 13 and missed the buzz.

‘Being in Hampstead you are in London but it doesn’t feel like it; there is greenery but you can be central easily – it’s the best of both worlds. I’m passionate about London, there are so many facets and interesting places, I just love the buzz and the feel of it. It accepts all people and we should be proud of that.’

There is a ridiculously big, bachelor-spec TV but it has been hidden away in a dark green wooden bespoke false wall in the living room, with all the consoles and accessories tucked away out of sight. 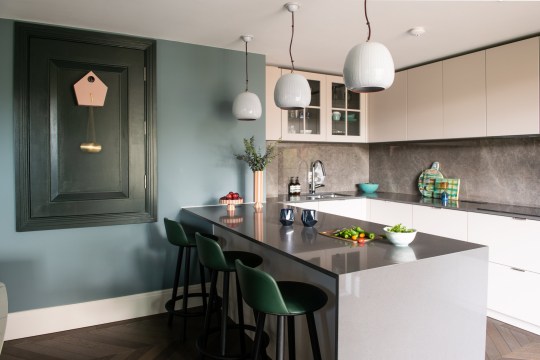 The apartment’s original kitchen was spiced up with quirky accessories (Picture: Sarah Rider)

‘The dark green wood effect adds another texture to the room and it would look fitting in private members’ drinking club uptown,’ adds Chris.

The Brandt kitchen was the only element of the flat fully finished when Chris moved in. It has been injected with character and fun courtesy of a cuckoo clock from Made.com and an I Would Like A Refund artwork by Babak Ganjei.

‘I feel very fortunate,’ says Chris. ‘I appreciate what I have and I have worked hard for it – I didn’t win the lottery. To live in this part of London, I can give myself a pat on the back. It fulfils a dream.’

Find out more at house-of-wolf.com.