‘The garden allows me to feel calm and at peace’ (Picture: Mercury Press)

Sometimes, you want to feel like you’re not in the UK, without actually leaving the UK.

And while driving down to the glistening coasts of Cornwall or Pembrokeshire can leave you feeling like you’ve flown over the channel, it takes a lot of time, effort and money that not everyone can afford.

That’s where Mark Lammin, 52, and his partner, Spencer 50, got the idea to turn their formerly ‘cottagecore’ garden into a tropical jungle inspired by the sunny islands of the Caribbean and South East Asia.

‘For me and Spencer, our garden is somewhere where we [go when] want to be transported somewhere else,’ said Mark.

‘Every other garden in the UK is a typical patio and some grass, they’re pretty bland, whereas each inch of the garden has plants on top of plants in it, I’m running out of space to add more.’ 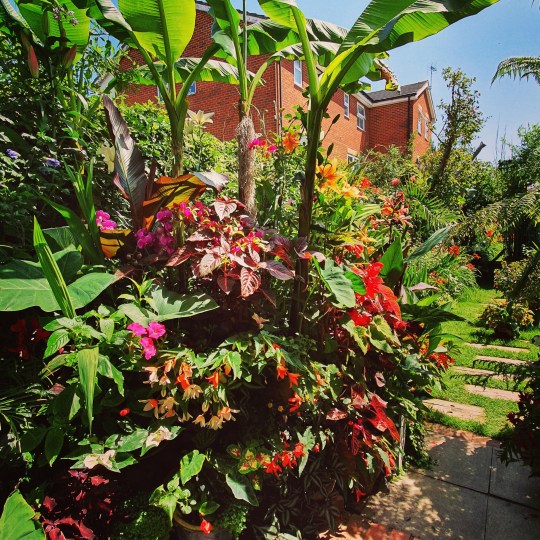 The garden is popular with the neighbours, too (Picture: @hertstinytropicalgarden / Mercury Press)

When the pair bought their cottage in Watford, Herts, five years ago, Mark says the garden was very typical, with lots of sunflowers, lupins, delphiniums and carnations.

‘One day, I’m not sure why, but we just decided on a change and ended up going out to buy some banana trees to add to the garden, and it has kind of spiralled from there,’ he explained.

‘We probably spend around £1,000 a year on the garden, as it’s our hobby to be constantly updating it.’

Now the 12 x4.5 metre garden is flooded with bright colours and more than 1,000 plants from around the globe, including bright pink cannas, leafy alocasias, bright impatiens and tall banana trees – and while a lot of UK gardens have suffered due to the heatwave, this tiny jungle has certainly thrived. 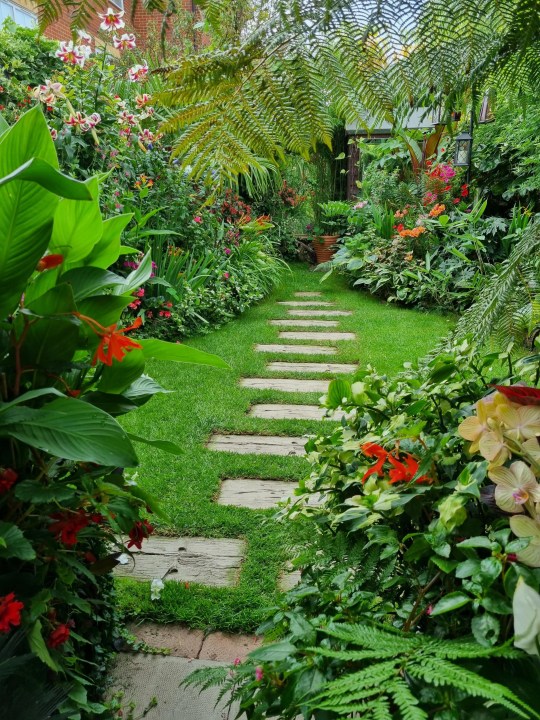 The garden thrived in the heatwave (Picture: @hertstinytropicalgarden / Mercury Press)

‘I’ve found that a lot of tropical gardens I’ve looked at previously often lack colour, so I wanted to make that a key focus point within our garden,’ said Mark.

‘I love bright pinks, oranges and reds, hot colours that are more likely to attract your gaze.

‘It was a matter of trial and error to get the right plants to live that would thrive in the UK climate correctly, but my itchy green thumbs never minded.

‘It’s even better that a lot of the plants have pups, so even if we haven’t planted something new for a while, several new plants actually just sprout up each day.’

For Mark, the garden is somewhat of a safe haven.

‘It is really good for my mental health, and it always gives back more than I give it,’ he added.

‘The garden allows me to feel calm and at peace.

‘Our living room faces out onto it, and one of my favourite pastimes is just looking at it and wondering what I’m going to do next.’ 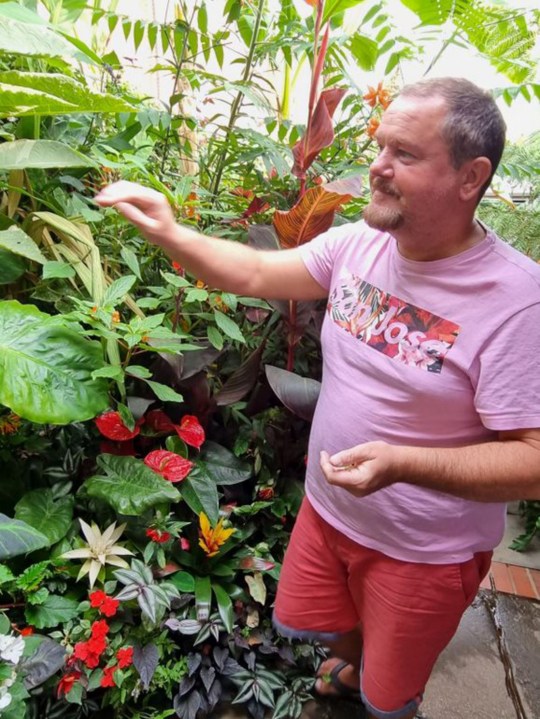 He’s not alone: the unique garden has garnered a lot of interest from neighbours, and the pair often open it up to the public in summer.

‘We’ve always had the best reaction to our garden renovation,’ Mark continued.

‘It basically towers over our garden fence, so our neighbours are always asking what we plan on adding next, and people will always come and peek through the garden gate to have a peek.

‘We love hosting our friends in the garden as it just feels like we’re all in an entirely different world, and it’s a lovely place to relax.

‘When we first opened the garden to the public, it felt like an achievement every time someone took a photo of it.

‘Our mini-Eden project has really paid off, it’s just sad that all the plants have to be stored away during the winter.’