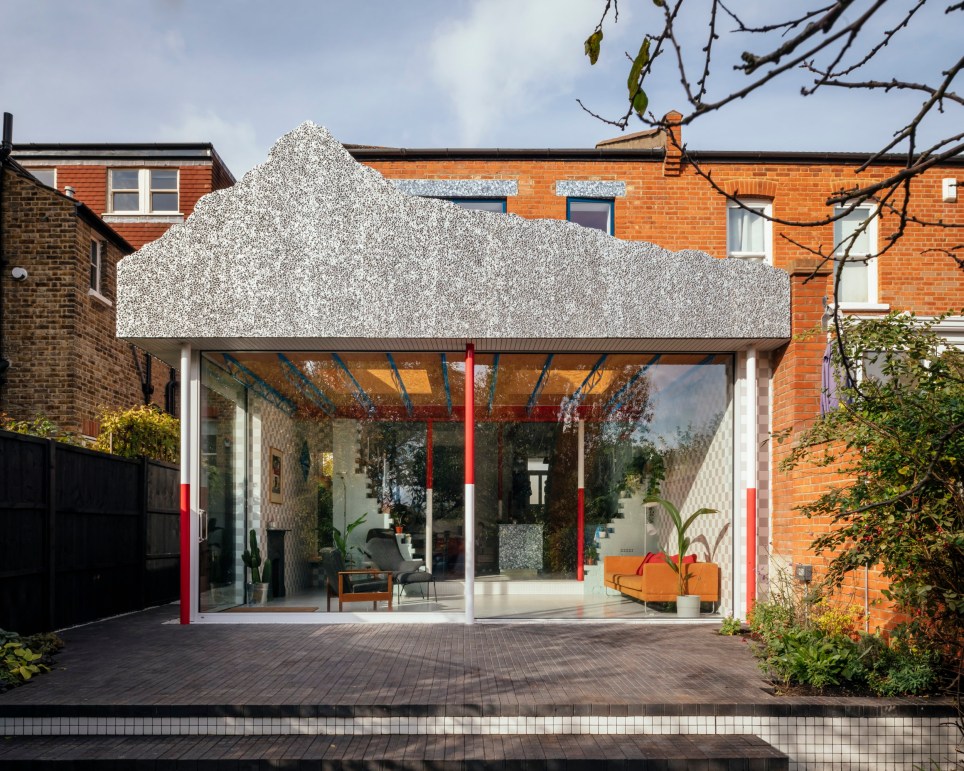 Mat Barnes and his family live in a home that’s anything but ordinary (Picture: Jim Stephenson)

When Mat Barnes’s two-year-old daughter Aurie goes to nursery, she tells her teachers she has a mountain on top of her house.

‘I don’t think they believe her,’ says Mat, the founder of Shoreditch-based architecture firm CAN.

‘But it’s actually true. And because of lockdowns, Aurie hasn’t been to many other kids’ houses.

‘I think she thinks everyone has got one.’

For now, Aurie has no idea quite how unique her home is.

The ‘mountain’ to which she refers is actually the extraordinary roofline of the extension Mat recently added to their four-bedroom Sydenham home — inspired, he says, by the Matterhorn Bobsleds rollercoaster at Disneyland, California, with dramatic peaks crafted from aluminium foam.

‘I loved the idea of elevating something seemingly really heavy atop a skeletal frame, and an American theme park is as good an influence as any,’ says Mat. 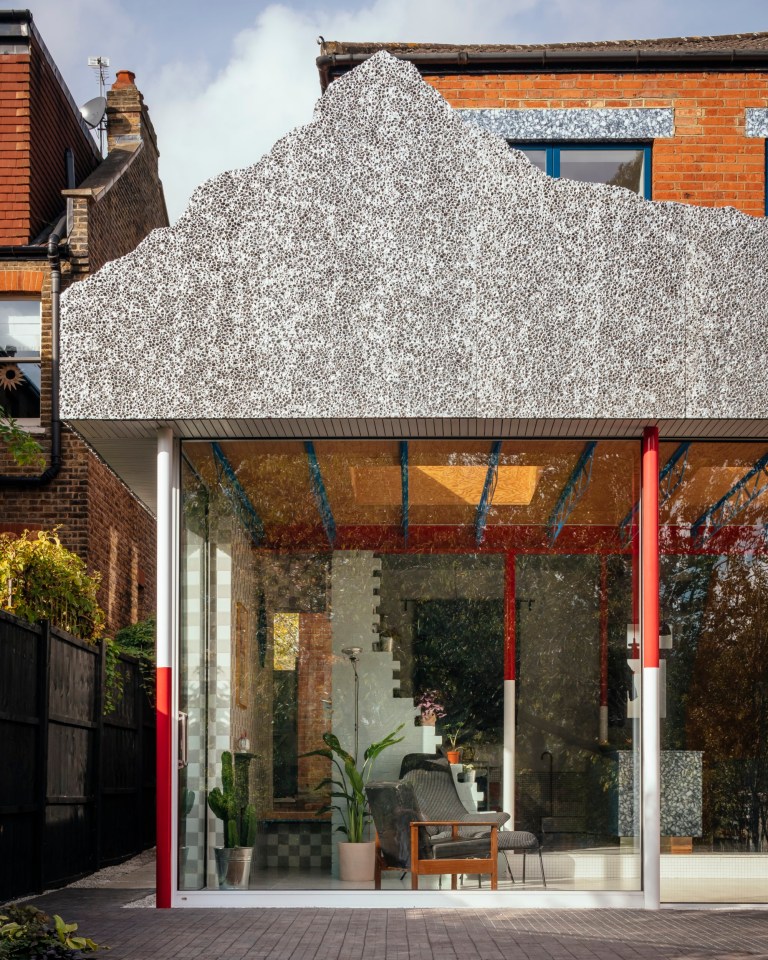 There’s a ‘mountain’ on the roof, just for fun, made of aluminium foam (Picture: Jim Stephenson) 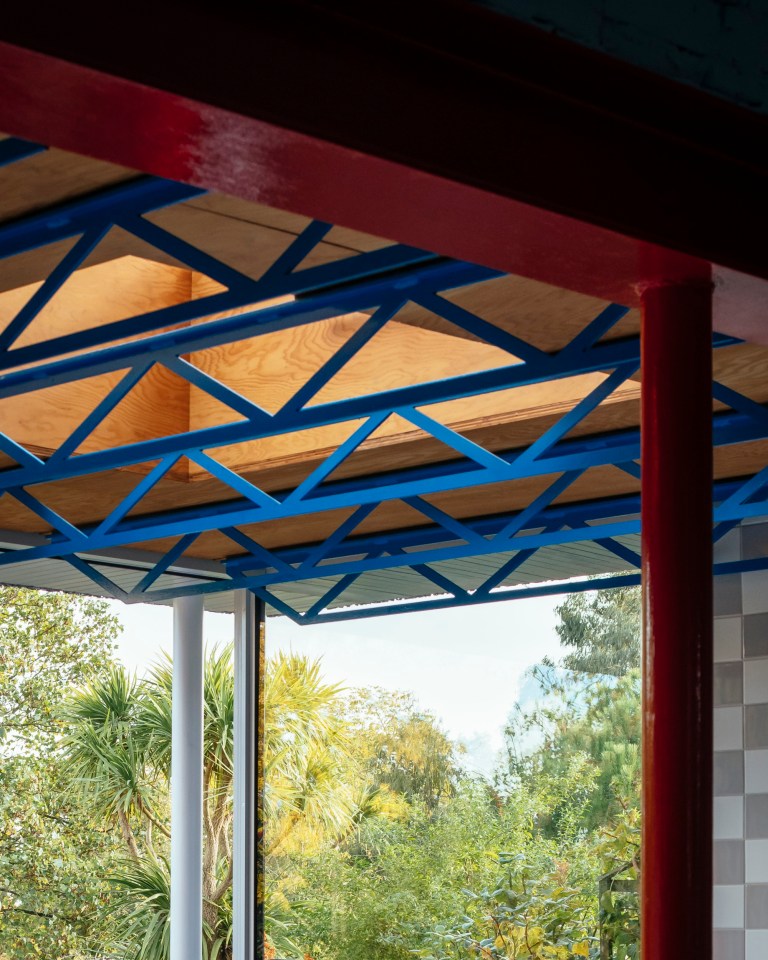 And Mat hasn’t held back when it comes to colour (Picture: Jim Stephenson) 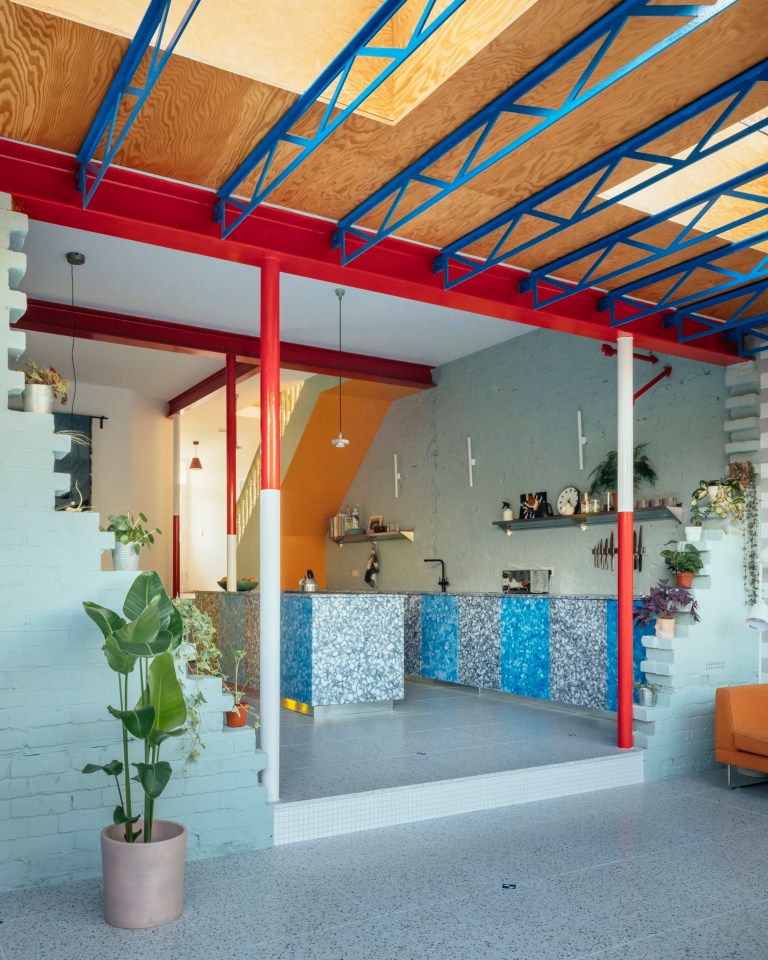 The home takes inspiration from all sorts of pop culture sources, such as Disneyland (Picture: Jim Stephenson)

‘I don’t see why architectural references need to always be high-brow. I like to take them from popular culture, too.’

In fact, over the last two years, Mat has renovated and redesigned the entire Edwardian semi, drawing on an eclectic range of influences.

These include everything from a Victorian bread plate by Pugin, the 1996 film Trainspotting, a Dior show staged in Paris in 2015, high-tech 1970s Hopkins House, in Hampstead, and McDonald’s Golden Arches. 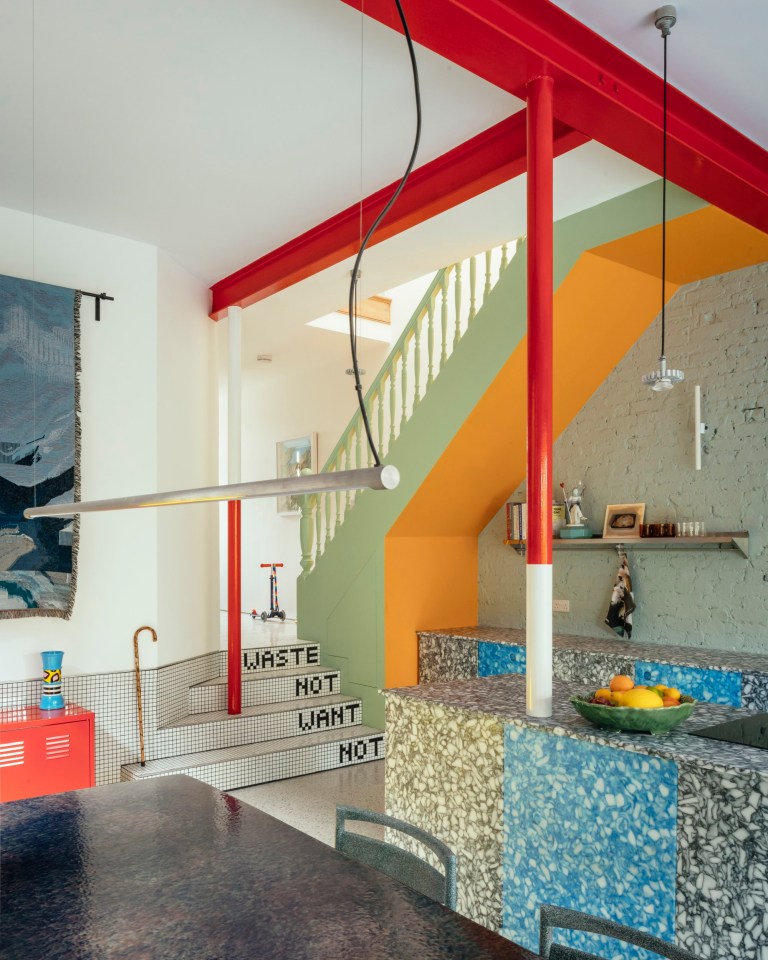 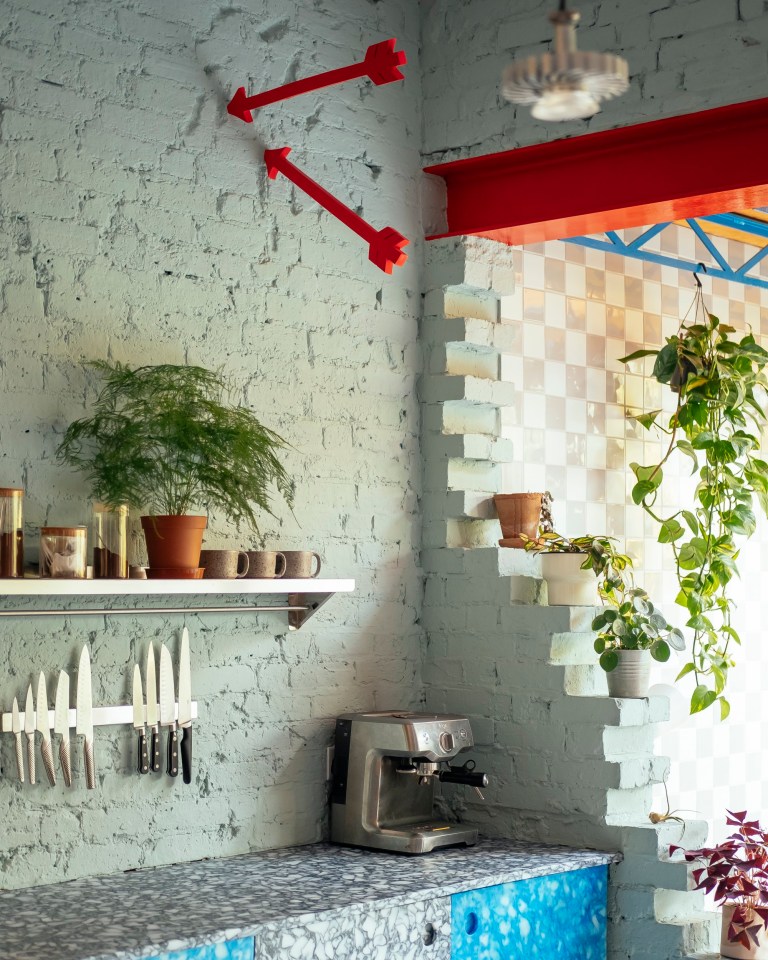 The family has spent the last two years transforming the home, with a £230,000 budget (Picture: Jim Stephenson)

The result is startlingly theatrical, with areas of intense dark and light created throughout the house, a blue-and-black speckled kitchen with worktop and cabinet fronts made from recycled chopping boards and milk bottle tops, and a palette of hypnotically intense colours — with not a lick of Farrow & Ball in sight.

Elsewhere, the staircase sings in a mix of RAL’s dahlia yellow and pastel green, while bright orange, traffic-light red and even a blush pink are added to the mix. 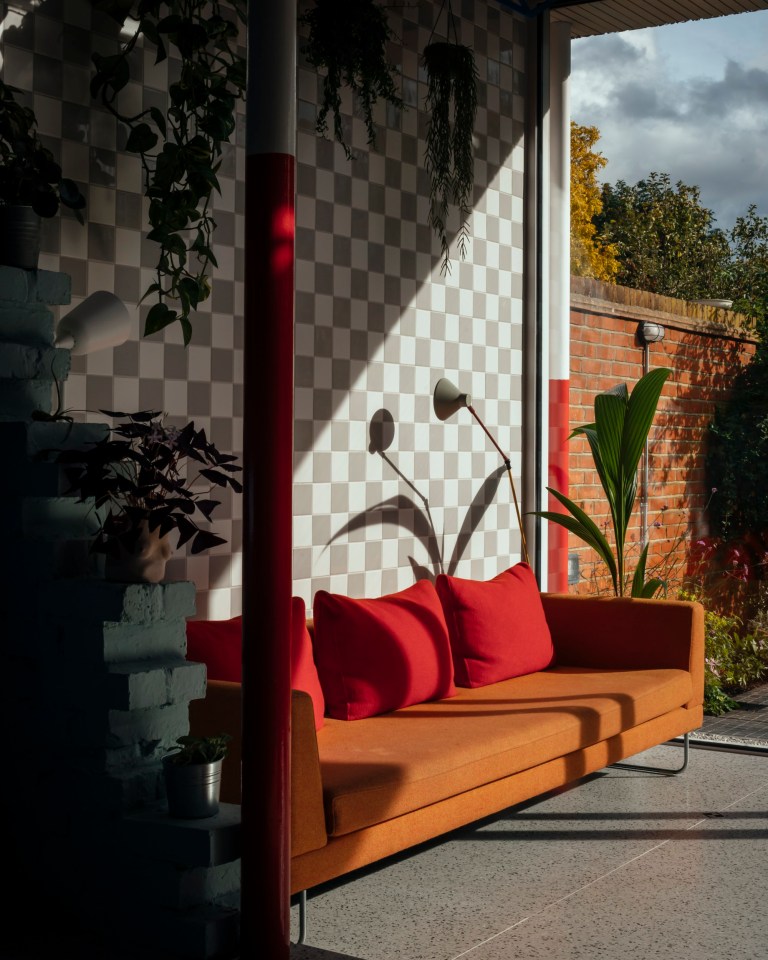 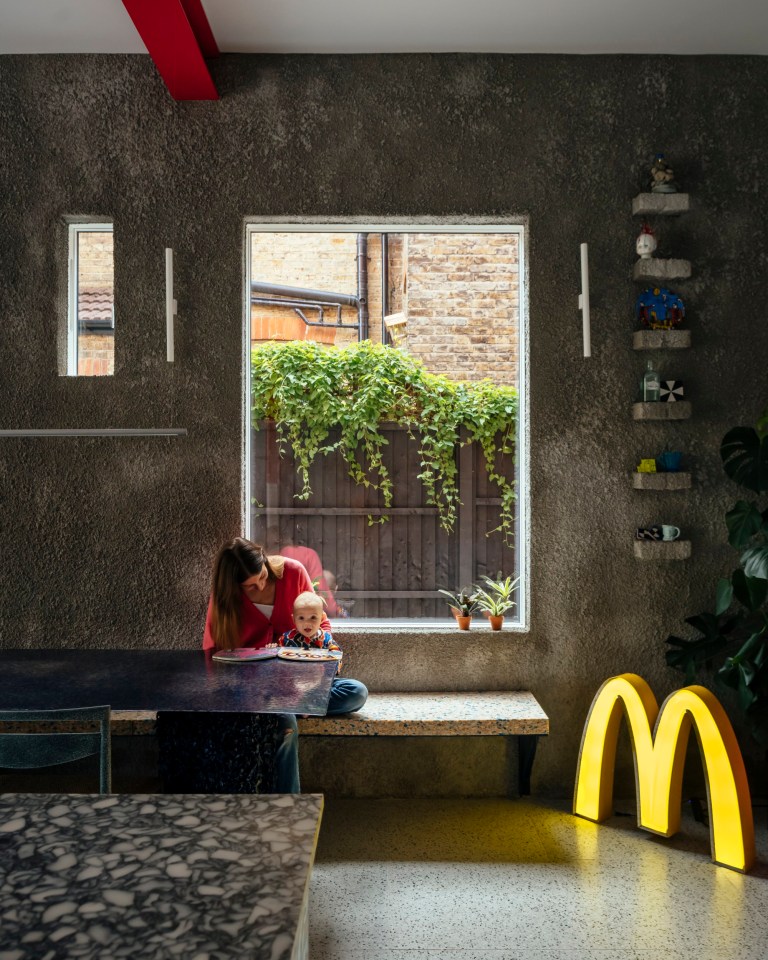 It makes for a rather unexpected family home for Mat, his wife, and their two young children (Picture: Jim Stephenson)

‘Who’s to say which colours clash?’ Mat questions. ‘I think if you love them, you should just go ahead and use them.

‘We’re surrounded by so many colours and textures in the outside world that to me it feels natural to bring them all inside, too.’

It’s all part of his own personal revolt, he says, against the anodyne, beige interiors that have become the hallmark of so many of today’s architect-designed homes. 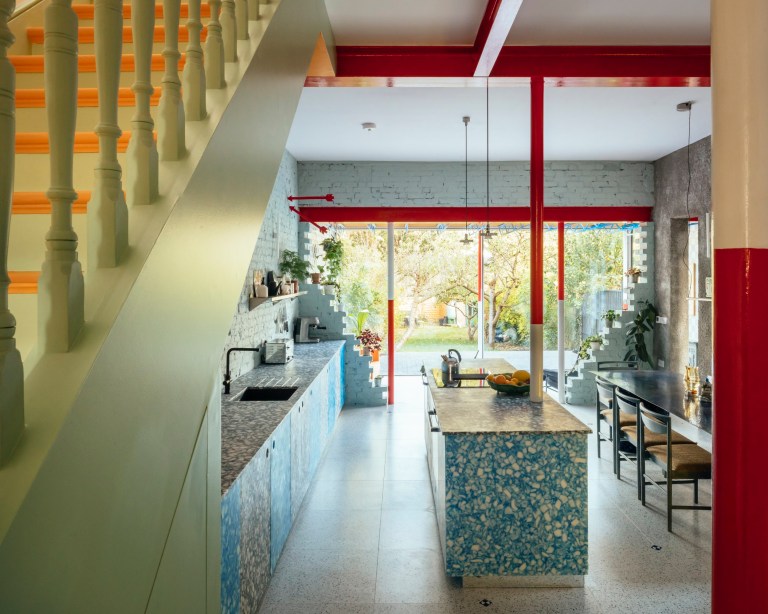 Mat sees the home as a bit of a rebellion to all the greige interiors that have become the norm recently (Picture: Jim Stephenson) 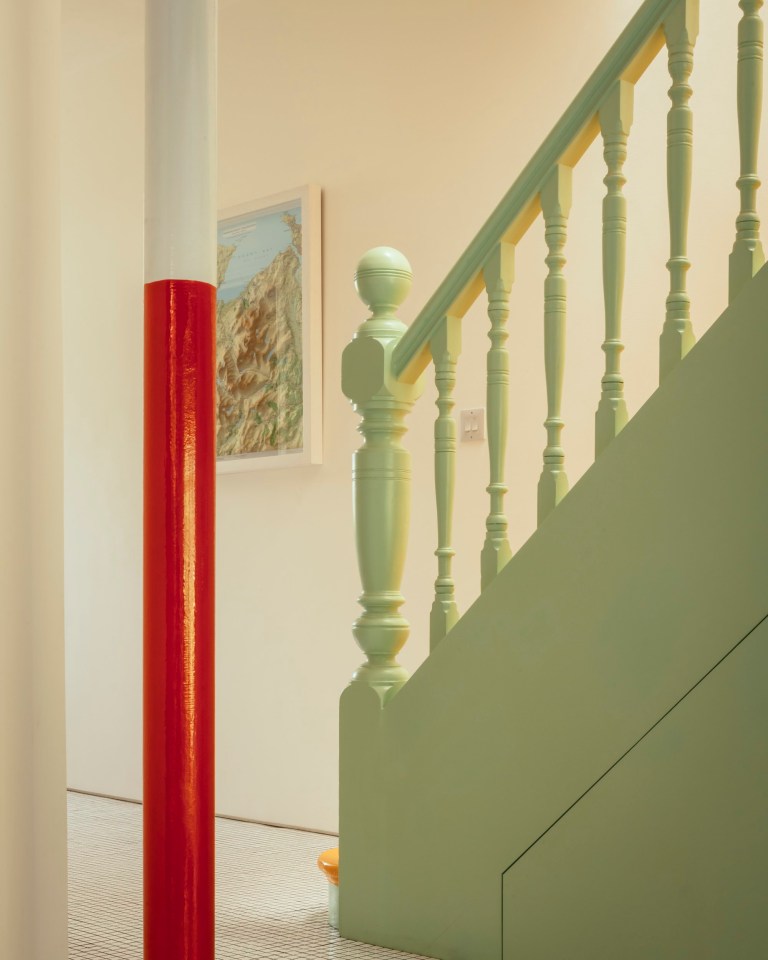 The designer has no concerns about colours clashing (Picture: Jim Stephenson) 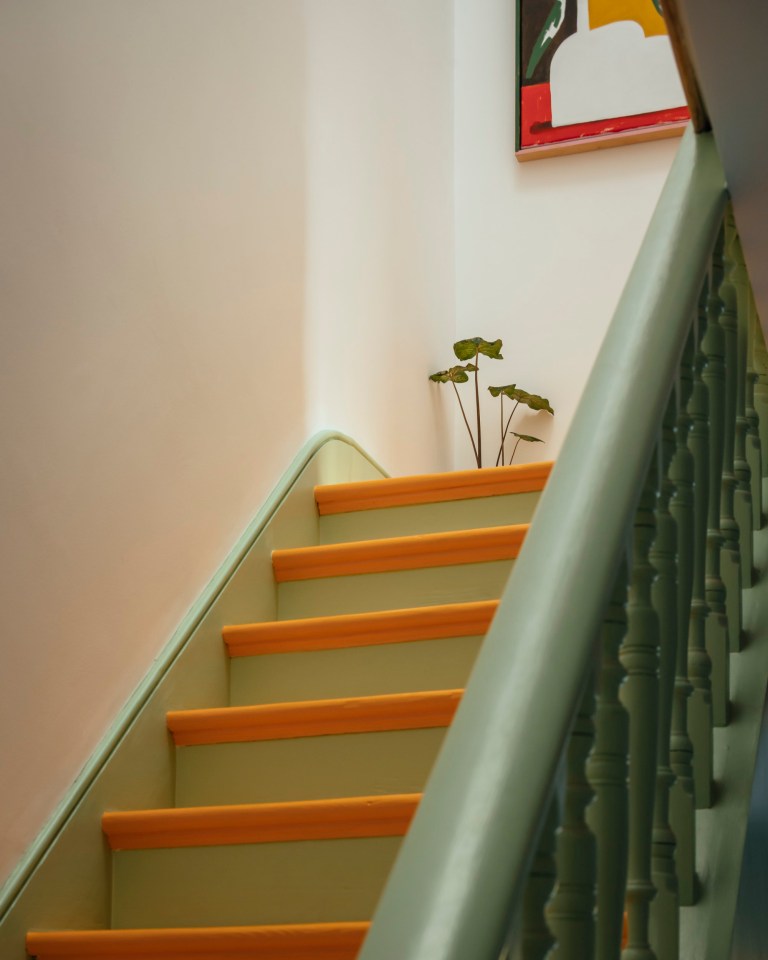 The result is a home that sparks joy (Picture: Jim Stephenson)

But, more prosaically, designing a flexible family home, for himself, Aurie, wife Laura Dubeck, who works for the Greater London Authority, and nine-month- old baby, Sidney, was also top of the agenda.

‘We had been living in Brockley, just a 15-minute drive away, and needed more space,’ Mat says. ‘Laura’s best friend’s parents were living next door to a house that had been left empty, with the owner living in Poland.

The derelict home was in a parlous state, with not just areas of damp and sodden, swirly pub carpets, but real danger zones. 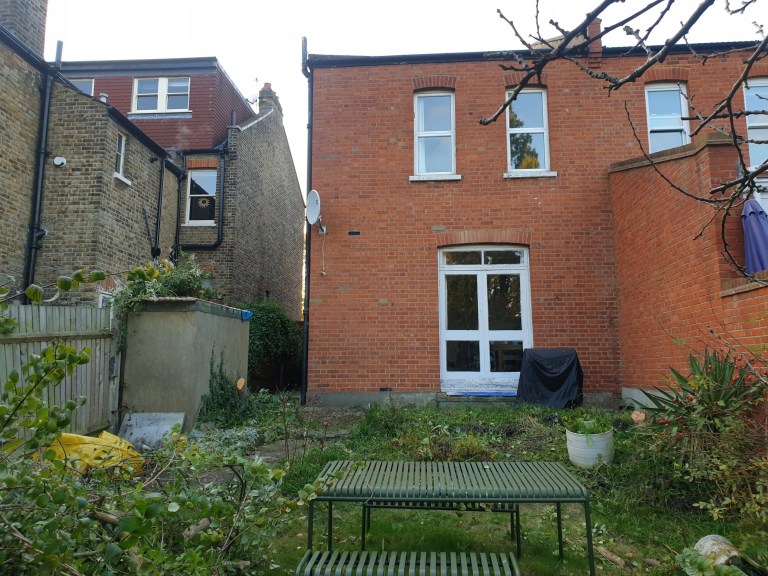 The house before its renovation, in a run-down state 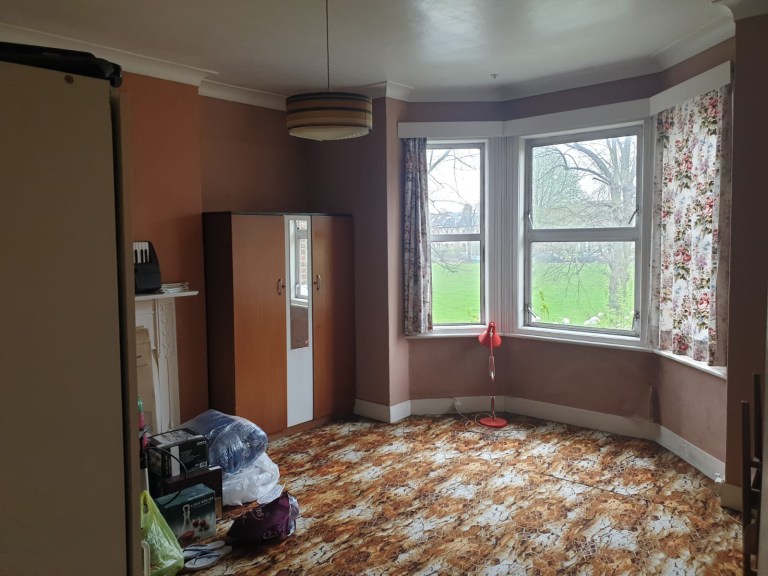 It needed a lot of work

‘We lived in the house for a couple of months,’ recounts Mat, ‘but then the hallway ceiling fell down as I was opening the door to a pizza delivery guy.

‘Luckily, nobody was hurt, but we realised we better move in with family members nearby while the work was being done.’

With a budget of £230,000 to cover both the main house renovation and the building of the extension, they completely transformed the home from abandoned wreck to surreal south-east London retreat.

As the house is not in a conservation area, and the streetside view of the mountain-roofline echoed two neighbouring houses’ dual-pitched roofs, local planners had no objections. 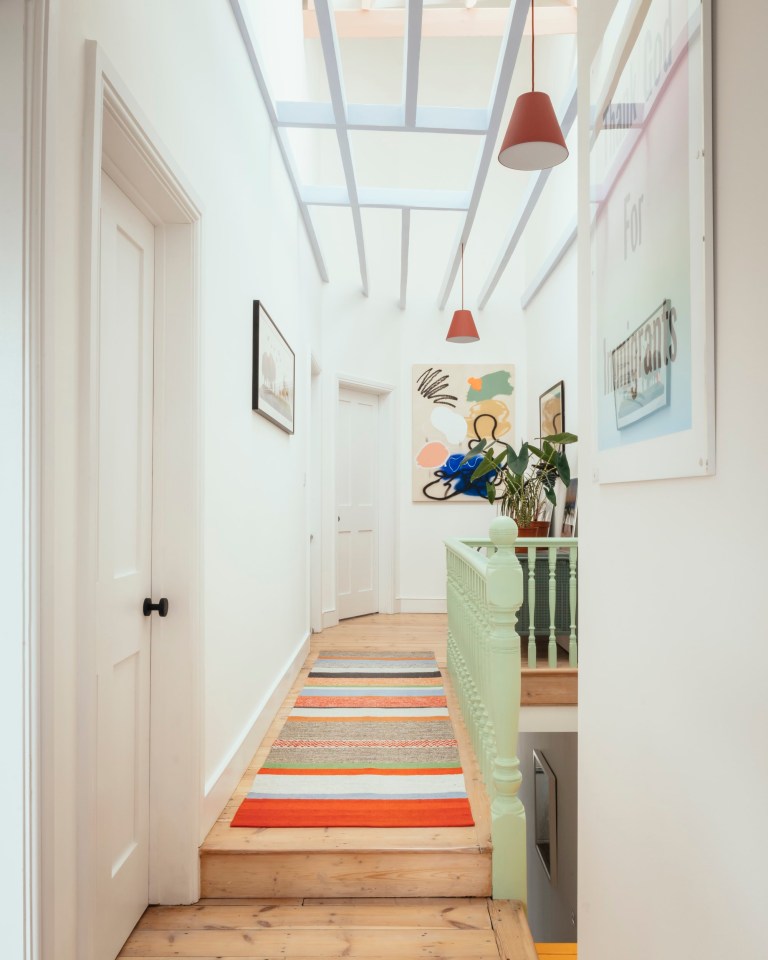 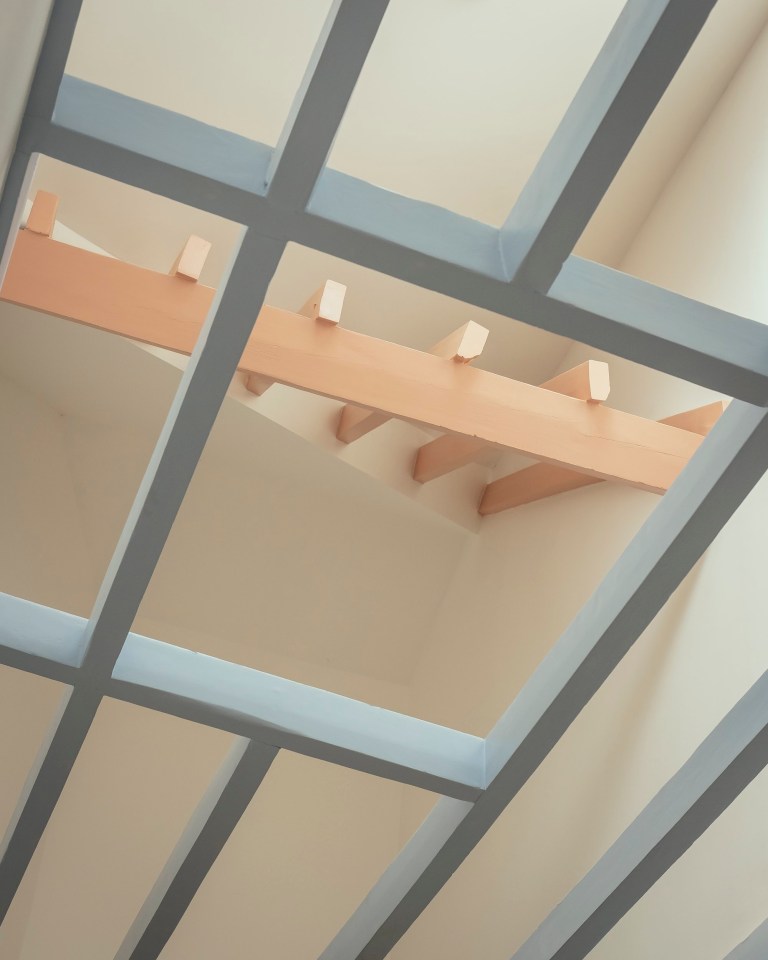 Mat says this isn’t a conscious decision, more the result of running out of money (Picture: Jim Stephenson) 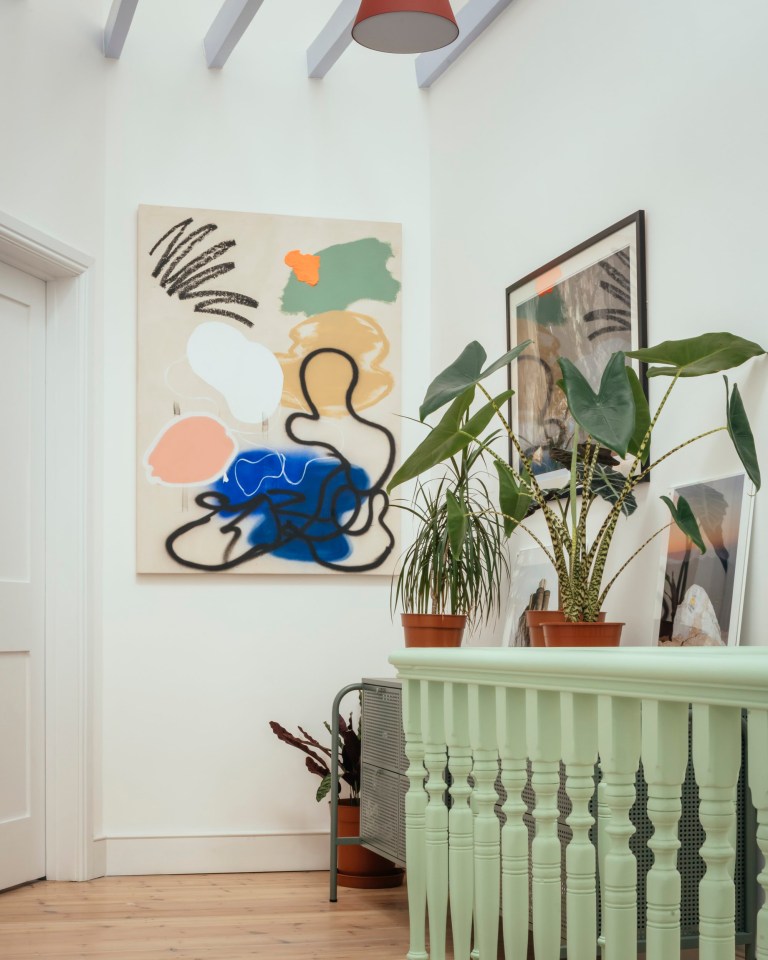 ‘Then again, it’s probably best not to go too hard stylistically up here, as the kids might get bored with it,’ says Mat (Picture: Jim Stephenson)

On the ground floor, a network of tiny, impractical rooms was opened up, and, off the hallway, a dingy lounge transmogrified into a dazzling-blue living space featuring an original fireplace, with sculptural plaster fragments arranged on a wall.

The progressively widening hallway leads onto the multi-coloured and textured kitchen/diner, and then on to the extension itself, its entrance marked by a partially ruined brick wall. 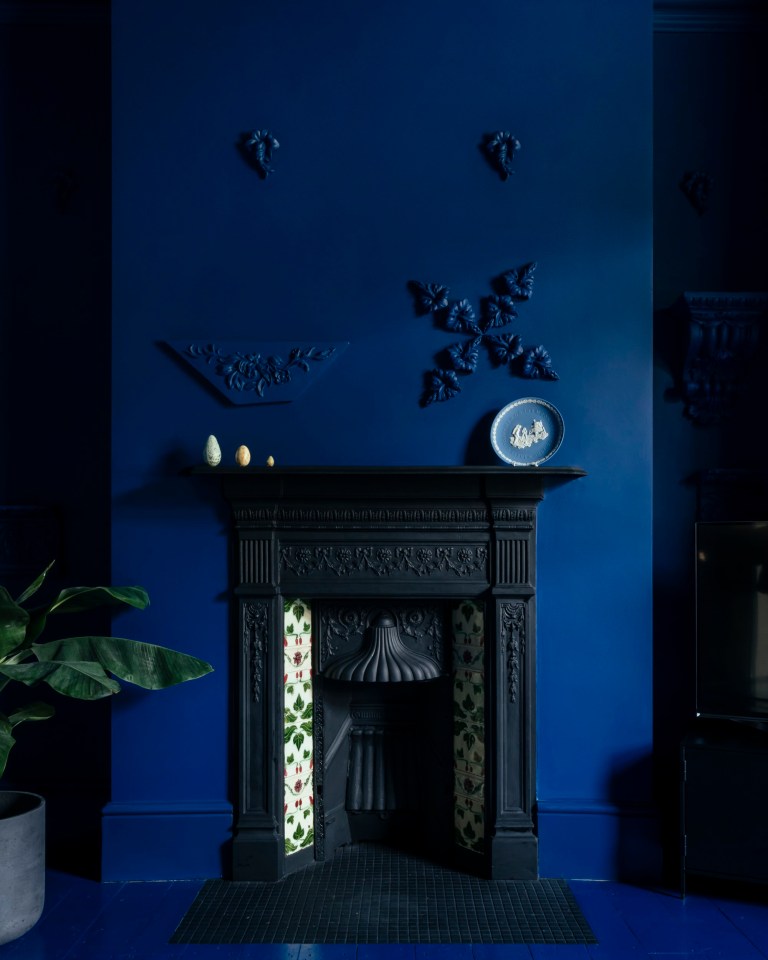 One rather intense area is this living room, with its original fireplace painted a darker shade (Picture: Jim Stephenson) 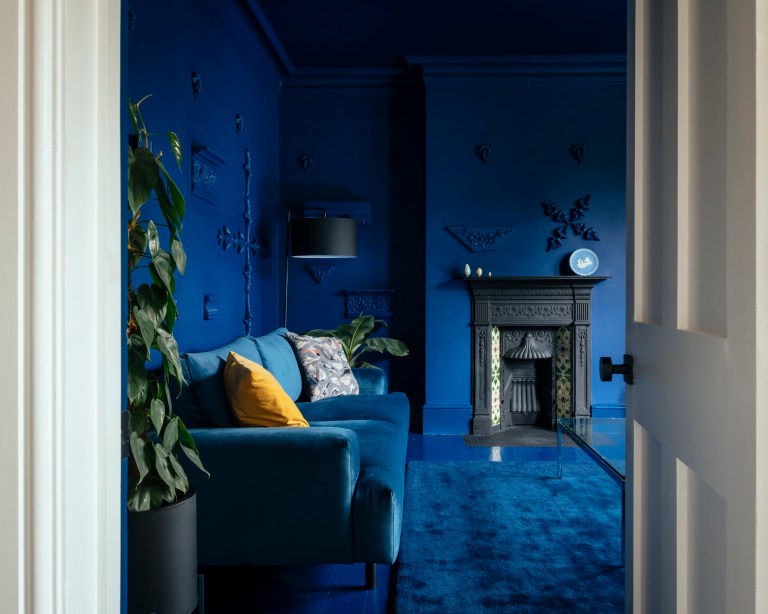 ‘I wanted this to reflect the semi-derelict state that we found the house in,’ says Mat, in direct contrast to what your average homeowner would want to do. ‘It’s also a reference to the abandoned flat in Trainspotting.’

The 25 sq m extension itself features exposed steel and timber, with a huge expanse of floor-to-ceiling glass leading on to the garden.

Upstairs, the lines are calmer, and the palette paler. Was this done deliberately, to keep the sleeping quarters more peaceful? 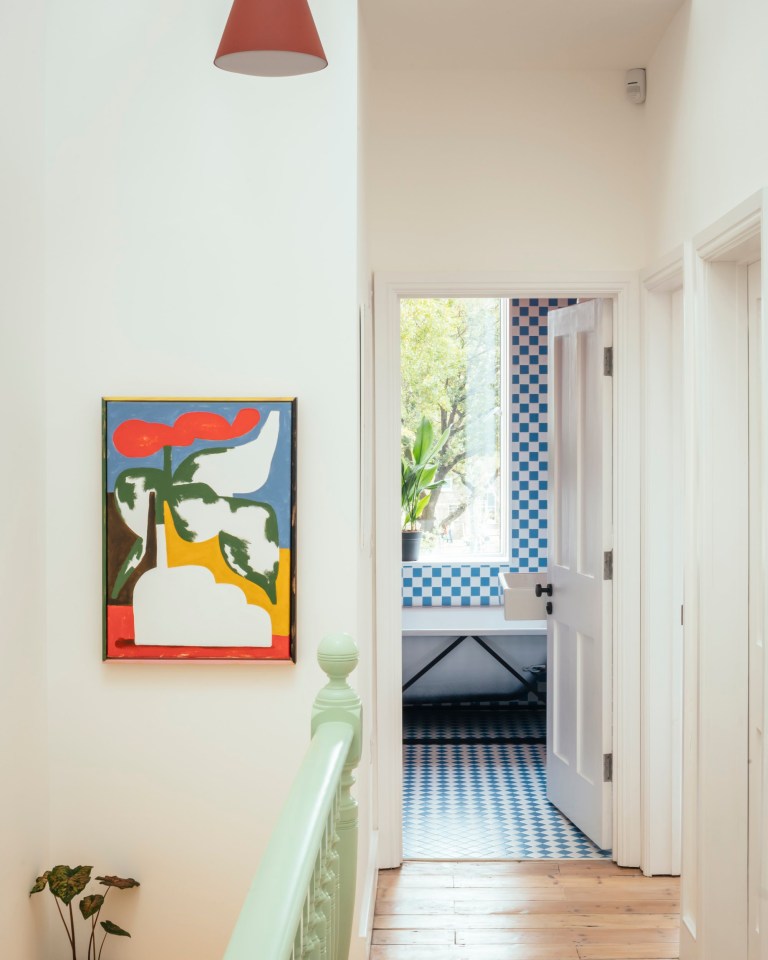 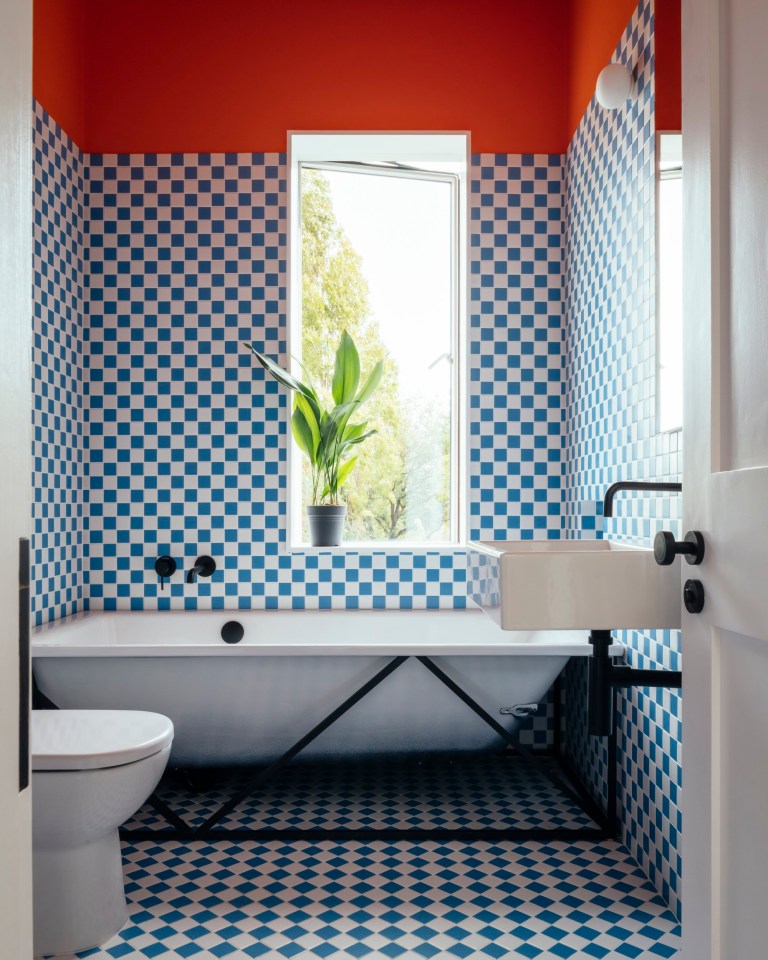 Mat admits that some of his friends say they couldn’t live here (Picture: Jim Stephenson) 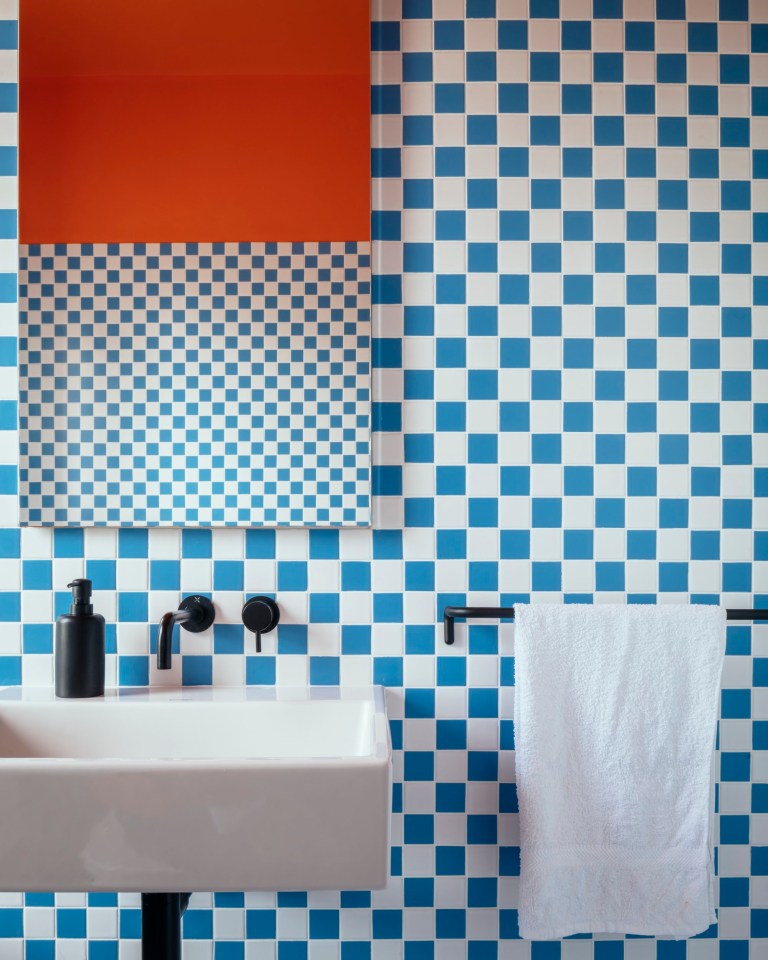 He accepts it’s not to everyone’s tastes… (Picture: Jim Stephenson)

‘To be honest, it’s more that we ran out of money,’ Mat laughs. ‘But then again, it’s probably best not to go too hard stylistically up here, as the kids might get bored with it.’

Family, friends and neighbours, says Mat, tell him they love it — although some have admitted the look would be too ‘busy’ for them to live with every day, and even Laura admits some of his ideas were just too out there.

But Mat is adamant that British homeowners’ obsession with trying to add value stops them from having fun, and letting their home be a true extension of their personality. 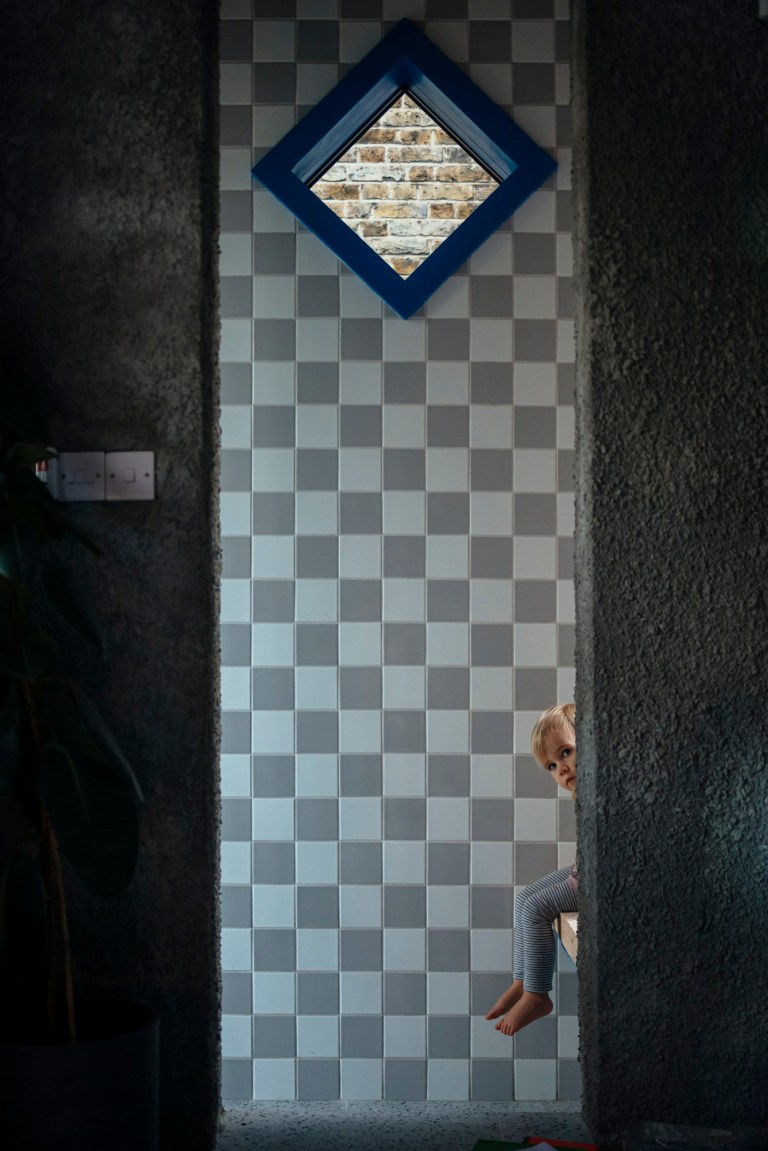 But the family love where they live (Picture: Jim Stephenson) 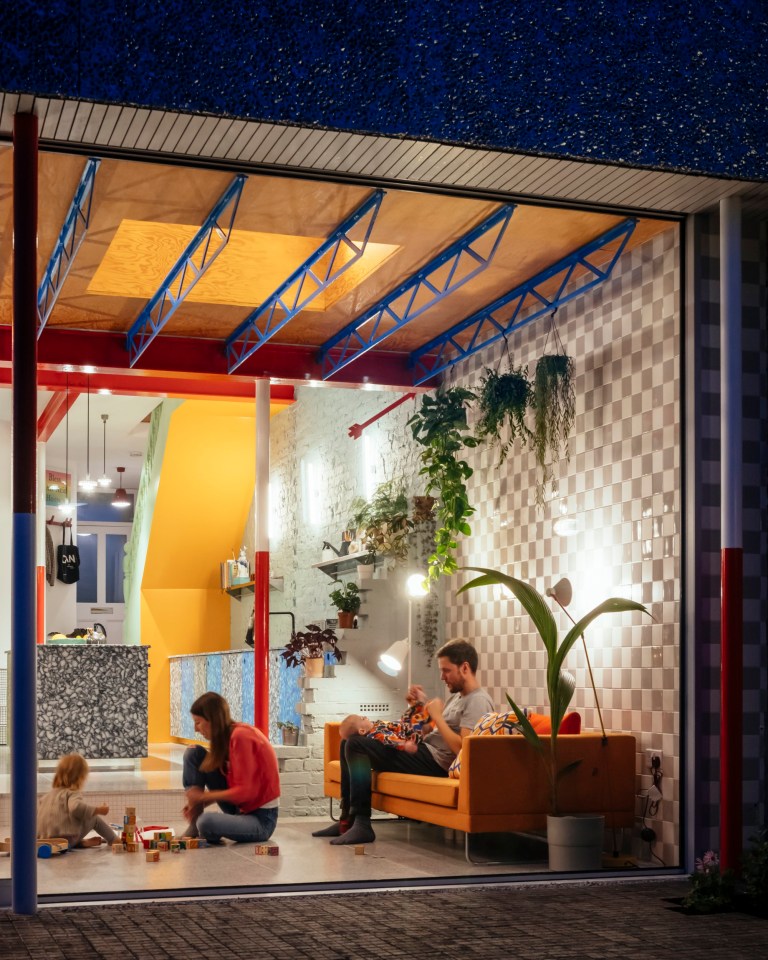 ‘What I love about our house is that it truly feels like it’s ours’ (Picture: Jim Stephenson)

‘Nobody has any control over the housing market, so if you are planning on staying somewhere for a while, just go for it,’ he says. ‘What I love about our house is that it truly feels like it’s ours.’

For those planning a new extension or makeover, Mat says having a sense of humour, and not letting ‘big-egoed architects’ dictate what you want, is key.

Next up at his own home is the garden, which needs a redesign, and the construction of a workshop.

As you’d expect, it won’t be your average garden room.

‘I’m thinking of styling it as a huge fake boulder,’ Mat muses. ‘Whatever it is, it will be something interesting.’

The living space is transformed by Dulux’s deep Marine Waters