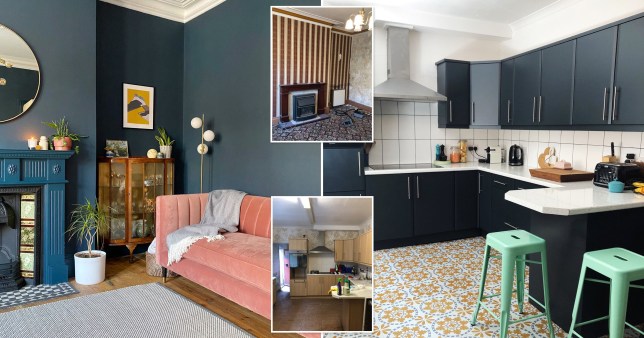 When Kievah Wallace 35, and her husband Jamie Wallace, 34, bought a four-bedroom home in December 2018, the property was in dire need of an update.

The house, in Newcastle-upon-Tyne, had been left untouched for 40 years, and the couple described it as a ‘total wreck’.

Once they had moved in – along with their daughter, Ruby, who’s just 18 months old – the couple set about a dramatic renovation.

Over the course of four months they entirely transformed the house in a major DIY project, tackling damp, knocking down walls, and replastering.

‘When we first bought the house, it had been in the same family since at least the 70s and was in drastic need of refurbishment,’ said Kievah.

‘It wasn’t even in a liveable state so we had to start renovations straight away.

‘It didn’t have central heating, had dampness and needed a full re-wire so we started with those jobs first.

‘The first complete room was the bathroom which we had to complete so that we could move in.’ 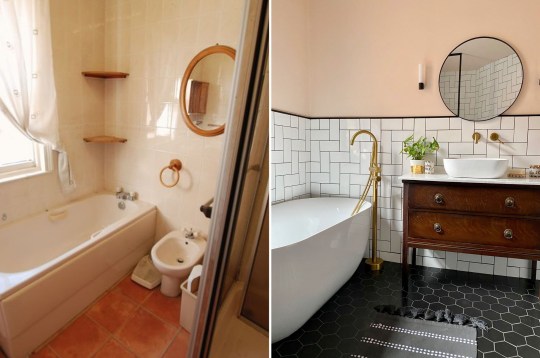 The bathroom was the first room to tackle (Picture: Jam Press) 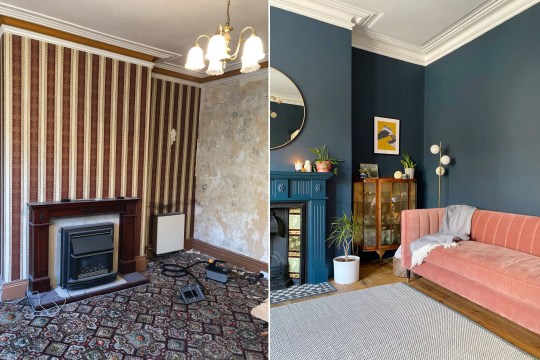 The couple did the bulk of the work themselves to keep costs down, but roped in Kievah’s dad to help, and hired tradespeople for the tricky bits (Picture: Jam Press)

Kievah and Jamie began by stripping the house right back and rebuilding it, which included installing central heating, rewiring, damp-proofing, knocking walls down and then getting the whole house re-plastered.

‘It was a long and messy process but so satisfying to be able to have a blank canvas to work with,’ said Kievah.

‘I used the Roomle app to plan layouts and schemes throughout and that was so helpful, especially in being able to provide a visual representation of what crazy thoughts were in my head.’

The pair got tradesmen in to do the serious stuff; like damp-proofing, electrics, and plumbing, but kept costs down by doing the bulk of the rest by themselves – with a little help from Kievah’s dad. 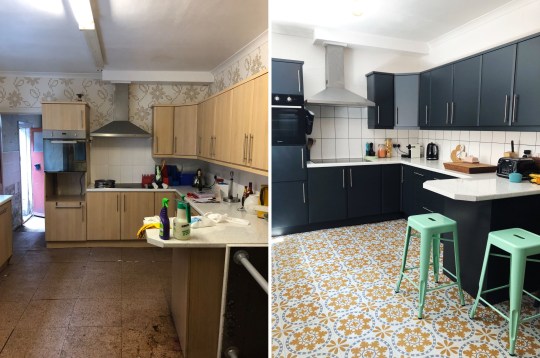 The house wasn’t in great shape when the couple bought it (Picture: Jam Press) 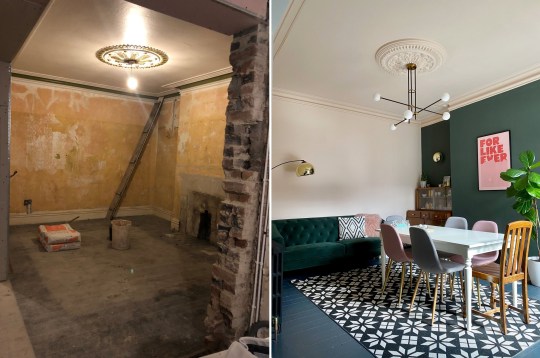 It had been left untouched for 40 years (Picture: Jam Press)

The family were finally able to move into their home in Easter 2019, but used lockdown to keep working on the interiors.

There’s more work to come, but Kievah and Jamie are looking forward to when lockdown lifts and they can finally show off their abode to friends and family. 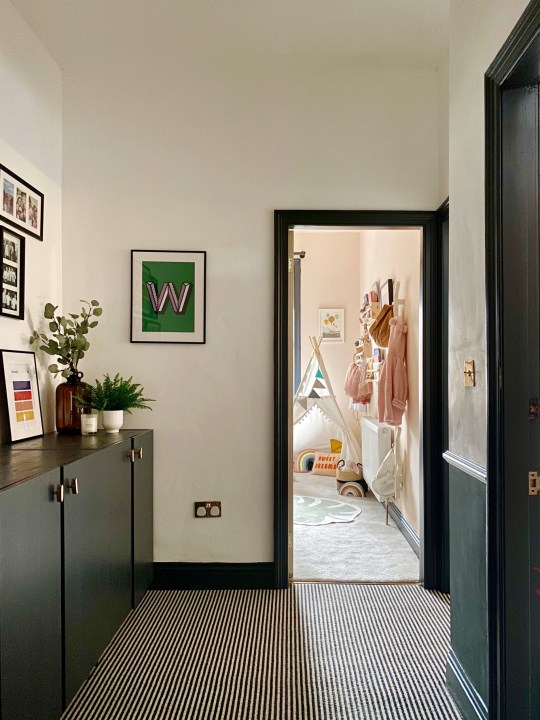 Kievah said: ‘I would say the hardest part of the renovation, apart from the initial mess, has been having projects halted through lockdown.

‘Not being able to have friends and family in the house has meant that we haven’t been able to get the help to tackle big projects, especially with a toddler in tow.

‘My favourite part of the house is the bathroom.

‘It was the first room we completely finished and it’s my sanctuary. 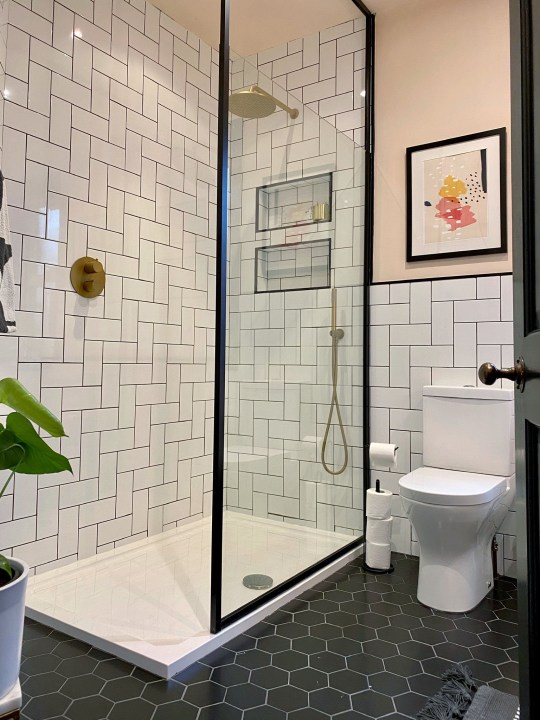 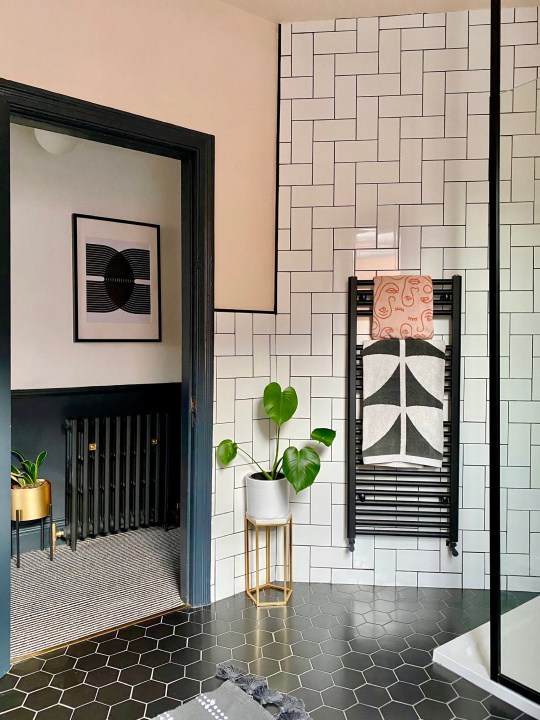 ‘Having a peaceful and clean place to retire to in the midst of renovation chaos was so important and it’s a room I still wouldn’t change a thing in.

‘Next on the list is the utility room and downstairs toilet and then the front door and entryway.

‘Once the majority of our inside jobs are complete, we need to tackle the outside of the house, front garden and backyard.’

For other people who are planning their own renovation, Kievah has one important bit of advice: be prepared to spend more money than planned. 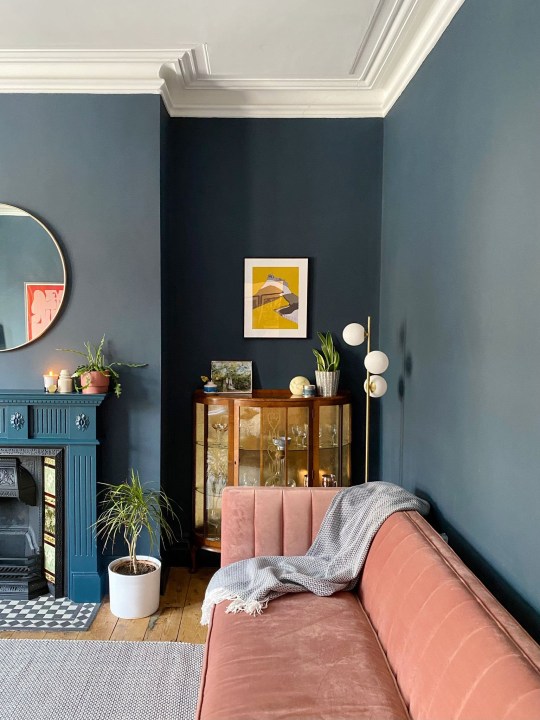 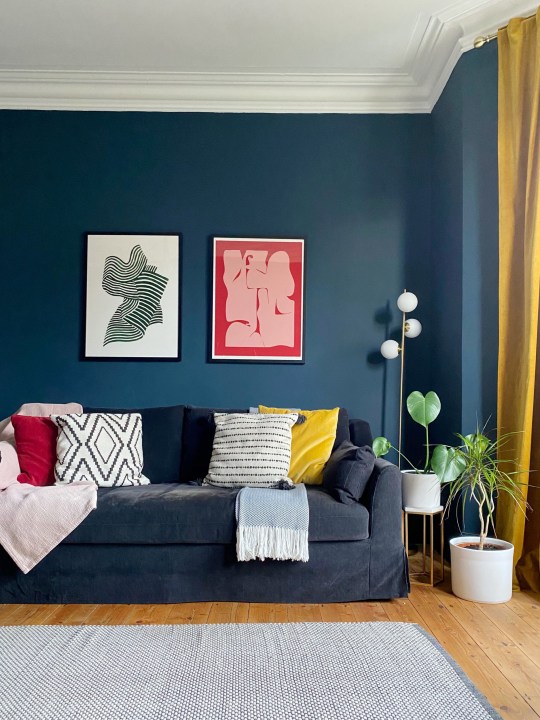 But Kievah and James are so proud of how far they’ve come (Picture: Jam Press)

‘Things can always cost more than you think they’re going to,’ she said.

‘We were able to get our house to a certain point with our initial budget and then we’ve just been tackling the smaller projects as we’ve gone along.

‘It can be really overwhelming and quite draining when you first take on a project, especially if you’re having to get multiple things tackled at once but it’s so worth it when you get each job ticked off your list and look at how far you’ve come.’

Have you completed an amazing DIY project you fancy showing off?

Get in touch to tell us more by emailing [email protected].