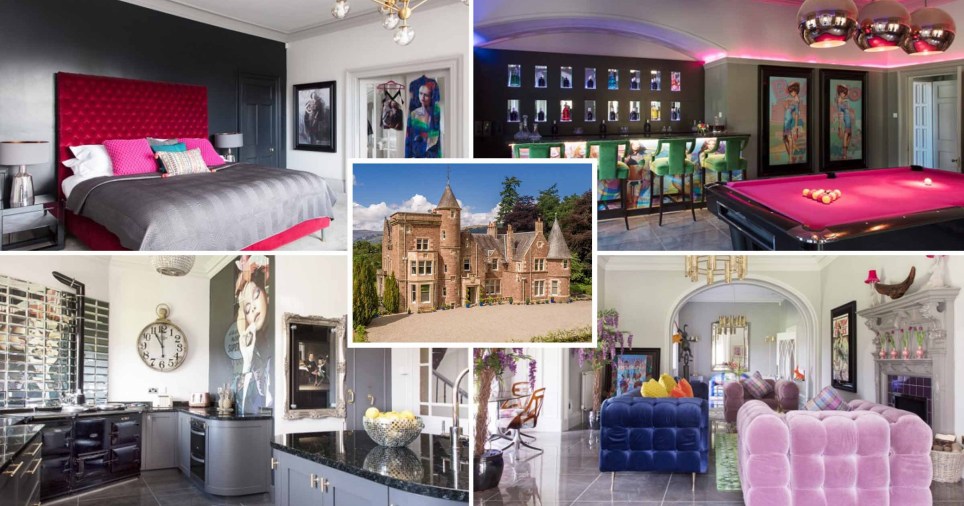 This home delivers on that – it’s a castle that’s been renovated into a glorious pop art paradise that’s perfect for parties.

The Gart, in Callander, Scotland, was built in 1835, then renovated by current owners Nikki and Stuart McAlpine Miller (an artist in residence at The Savoy Hotel in London) in 2016.

Nikki and Stuart put a spectacular stamp on the mansion’s interiors, with Stuart’s art dotted throughout, impressively luxurious features, and plenty of colour.

So, what would you get for that cash? 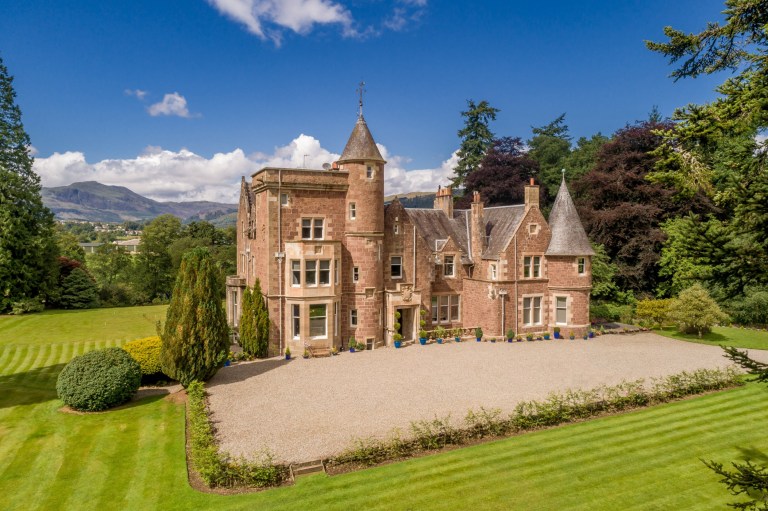 The castle was built in 1835 (Picture: Mediadrumimages / Savills) 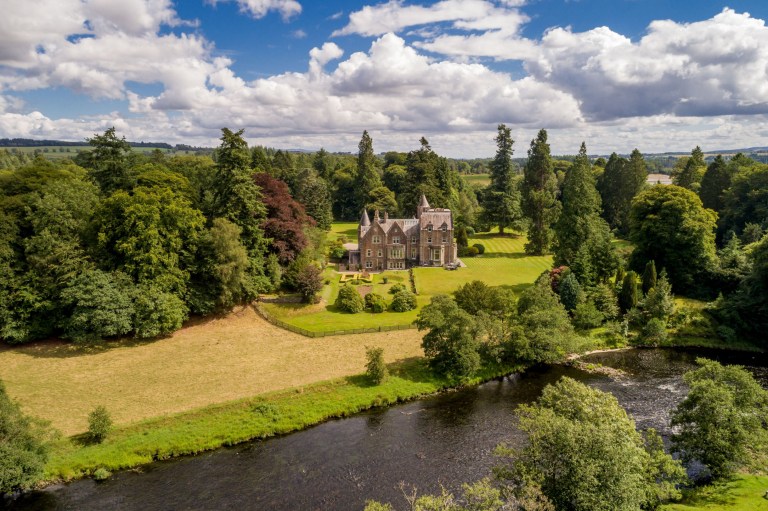 It has 12 acres of gardens (Picture: Mediadrumimages / Savills)

The castle is made up of 13 bedrooms, five bathrooms, a kitchen, a dining room, office, gym, morning room, billiards room, library, cinema, and garage. Whew.

That means it could easily sleep up to 26 people, and has been designed for parties – the home is available to hire out for special occassions.

Many original period features have been maintained, such as the panelling and high ceilings, but the design has been brought bang up to date with modern elements, such as a 100ft long drawing room, a home cinema, and a gin and whiskey bar. 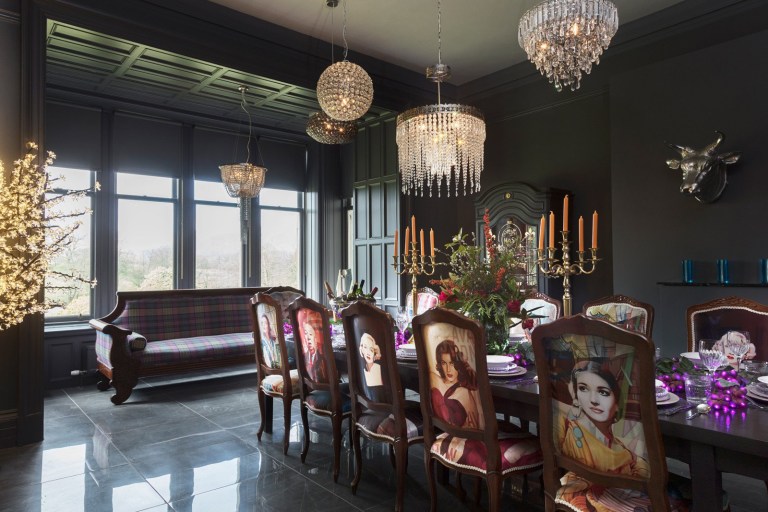 Couple Nikki and Stuart McAlpine Miller bought the property in 2016 and set about its dramatic renovation (Picture: Mediadrumimages / Savills) 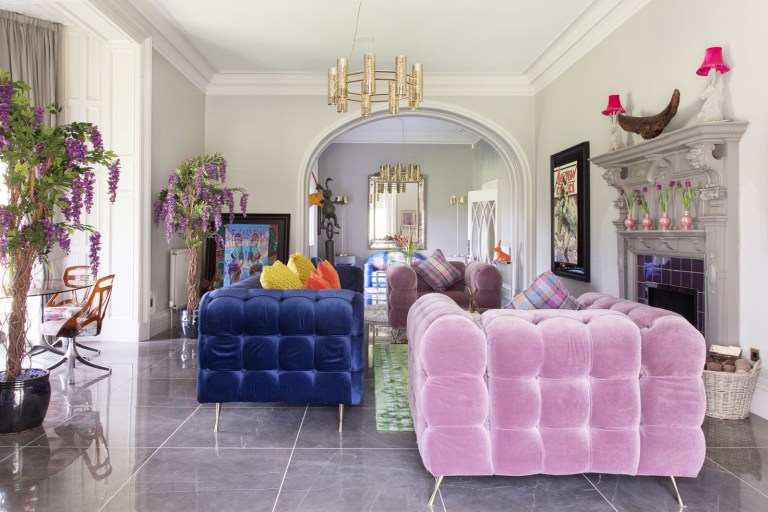 They wanted the home to be like a massive art gallery (Picture: Mediadrumimages / Savills) 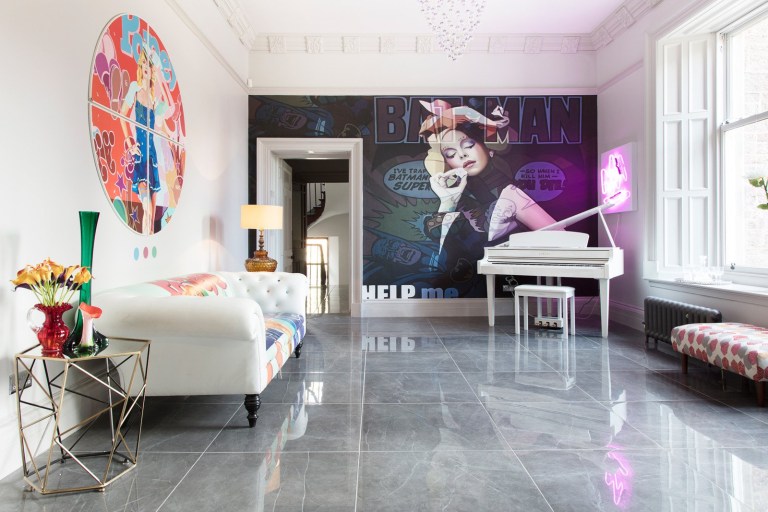 Much of Stuart’s own pop art is dotted around the building (Picture: Mediadrumimages / Savills) 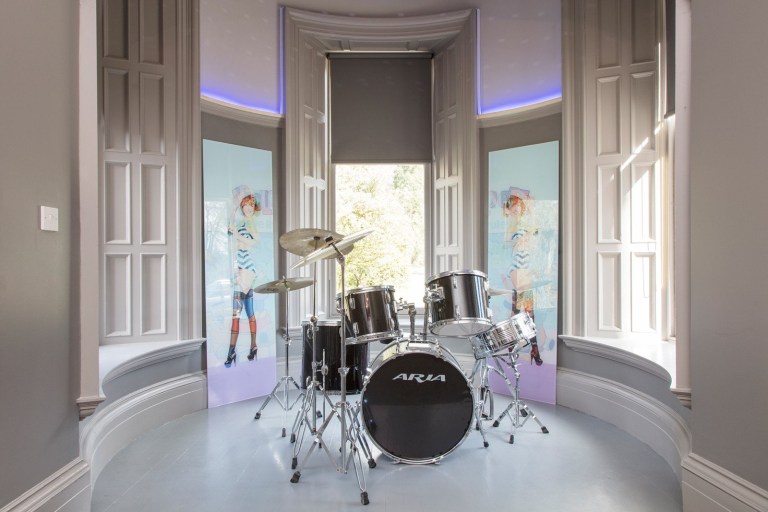 A dedicated nook for a drumkit (Picture: Mediadrumimages / Savills)

There’s also a pepper pot turret, plus a second tower with a spired roof, and 12 acres of gardens.

The Savills listing reads: ‘The Gart is a handsome stone-built Scots baronial country house which dates from 1835.

‘An original, smaller house was designed on the site by William Burn. It was substantially rebuilt and enlarged after a fire in 1901.

‘The house can sleep up to 26. It is ideal for entertaining with a one-hundred-foot long reception room with its roaring fire for winter evenings. 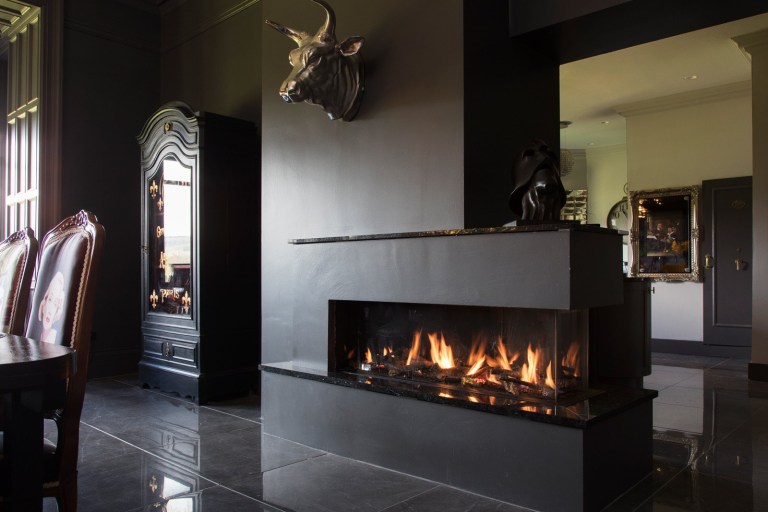 The Gart is often booked out for extravagant parties (Picture: Mediadrumimages / Savills) 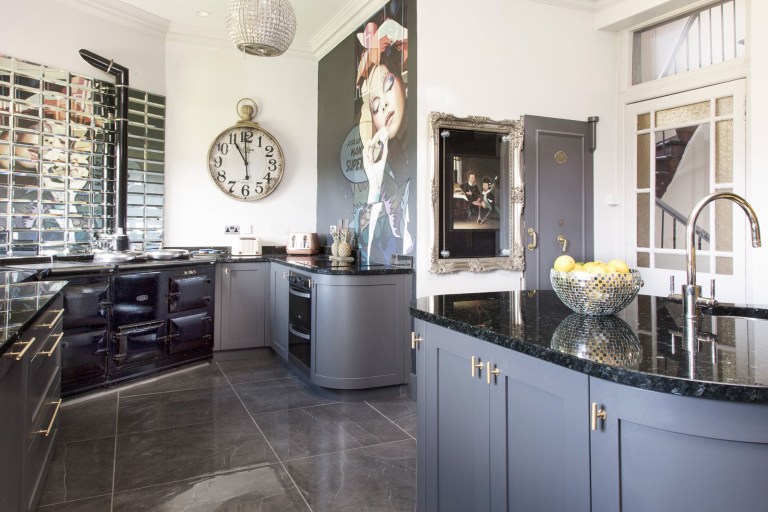 It’s now up for sale for £2.1million, through Savills (Picture: Mediadrumimages / Savills) 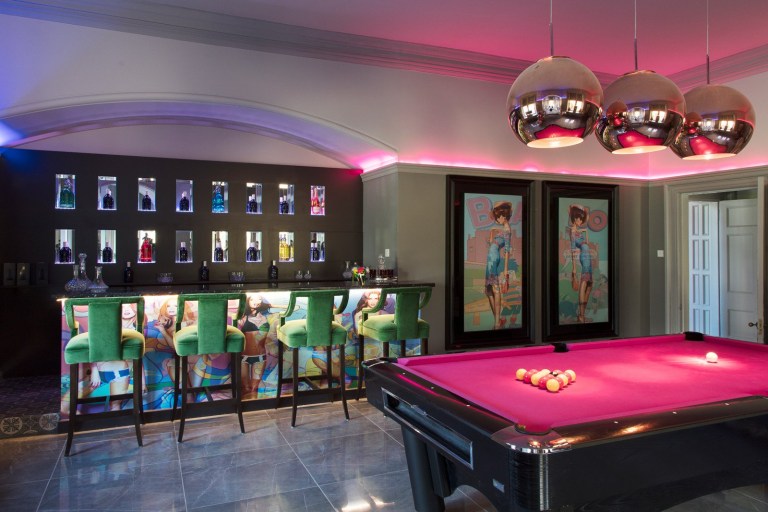 While some period features have been maintained, there are some very modern upgrades (Picture: Mediadrumimages / Savills)

‘The Gart is a remarkable property in a truly spectacular location.

‘The McAlpine Millers have created a home for themselves, and an incredible space for guests, that feels both personal and very unique.’

Nikki added: ‘Here the work was more to do with the interior than anything structural.

‘We’ve taken on a lot of exhibition spaces in London so we’re not afraid of large spaces. 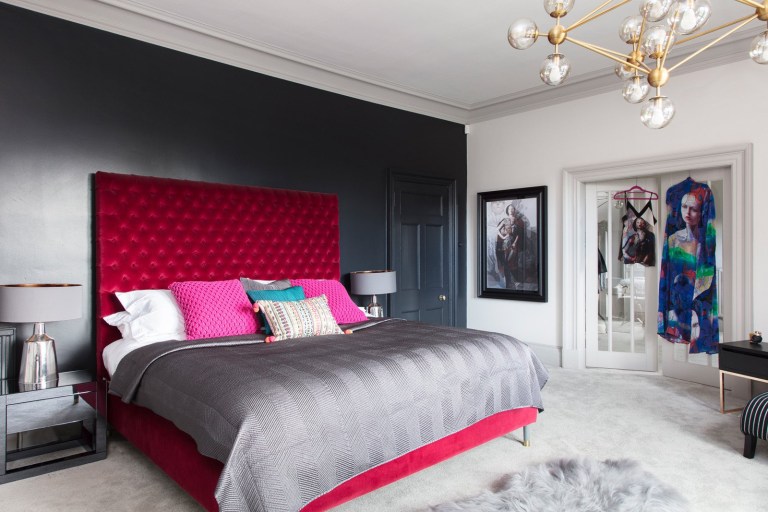 There are 13 bedrooms (Picture: Mediadrumimages / Savills) 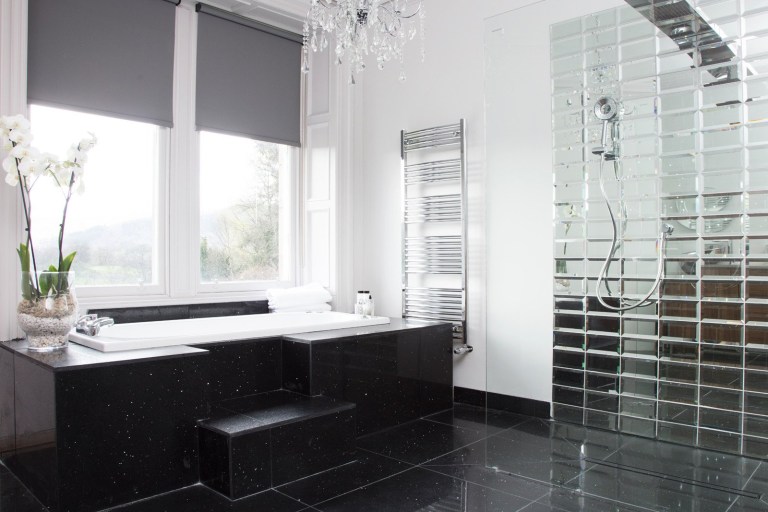 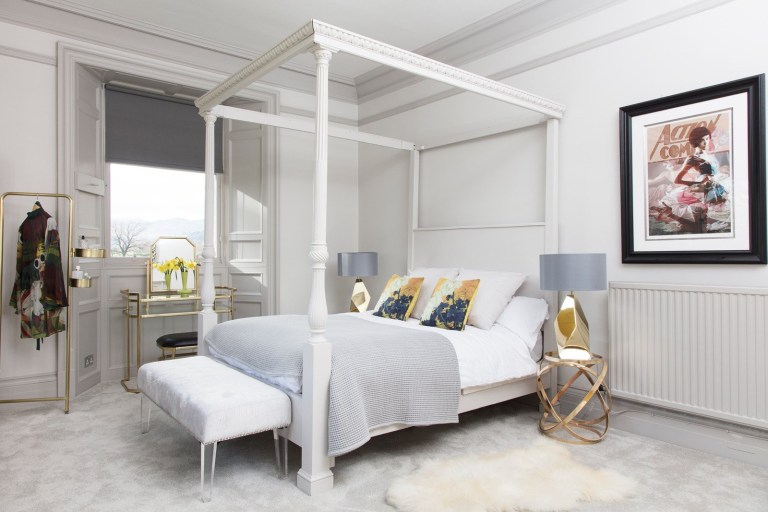 ‘I love original features, and I like the mix of contemporary and traditional.

‘We were definitely looking for a place with large open spaces. We wanted to create an art gallery within the house, so we wanted to have a lot of wall space and be considerate throughout with colour.

‘It was a blank canvas at the time, but the view from every window was like a painting.

‘The house looks very pretty with its turrets, and looking out of the windows and seeing the mountains is very humbling.’

If you’re keen to find out more, you can take a look at the Savills listing.