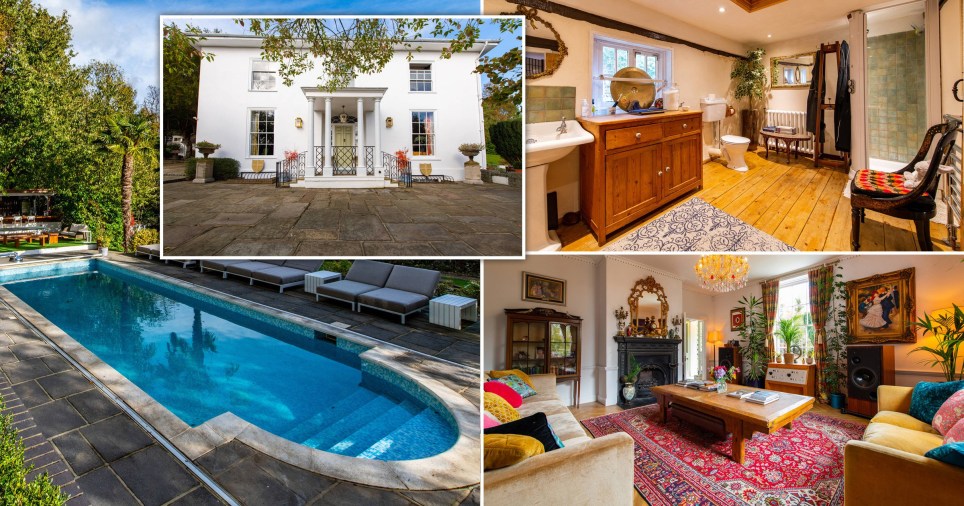 This Grade-II listed property, Addington House, was once the summer residence of the Archbishop of Canterbury.

The home boasts six bedrooms, three bathrooms, a kitchen and breakfast room, a utility room, five reception rooms, a sauna, a cinema, a classroom, a wine cellar, an old bakery and a garage.

At the rear of the property there’s a large swimming pool and terrace overlooking the garden.

The house is believed to date back to the 12th century, if not even before then.

It’s the only ancient house of the manor of Addington that remains standing after being sold in separate lots in 1803. 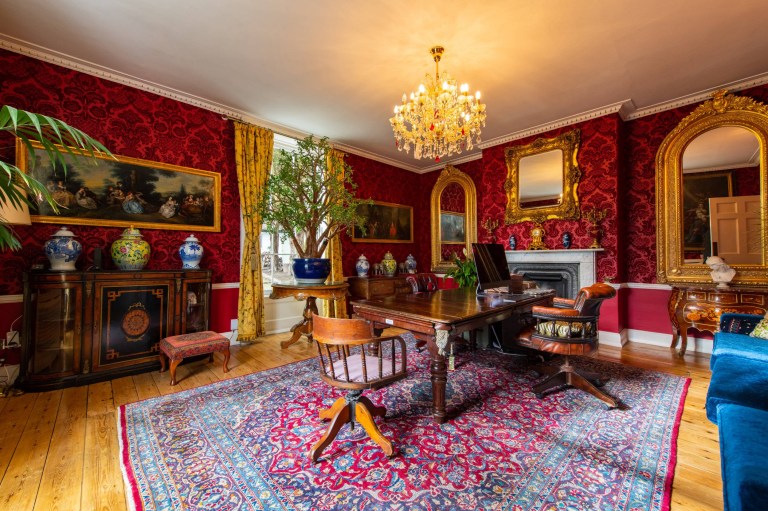 Some of the property has been standing since the 1450s (Picture: MediaDrumWorld/Sotheby’s Intern) 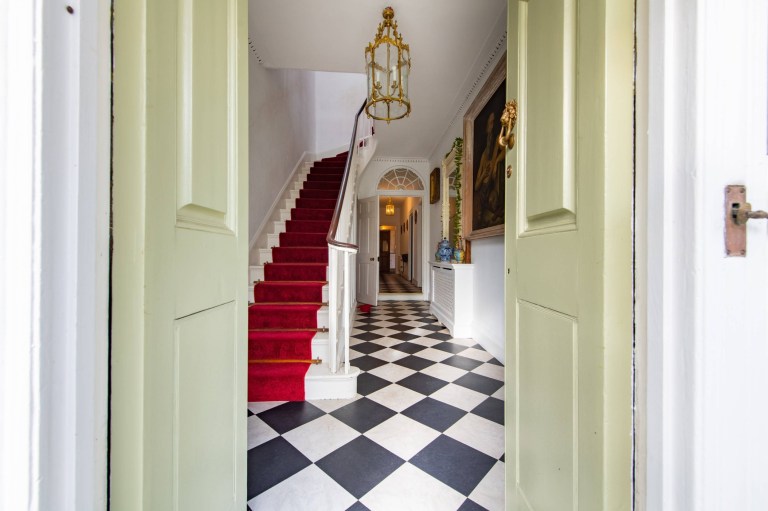 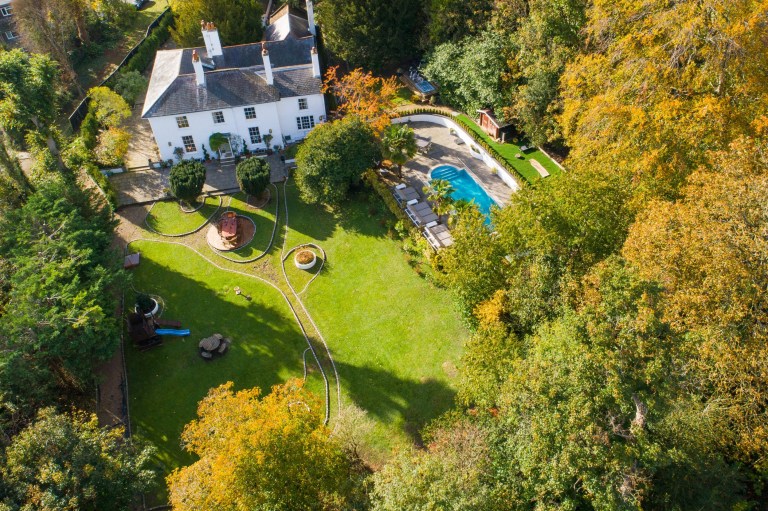 A birds-eye view of Addington House and its grounds (Picture: MediaDrumWorld/Sotheby’s Intern)

Addington House holds plenty of medieval history. Historically speaking, it was the site of a strange and forgotten tradition of the monarchy.

The holder of the manor had to serve a dish of dillegrout – a spiced chicken porridge – to every new sovereign at their coronation.

The tradition began with Henry II’s coronation in 1154 and ended with the coronation of Edward VII in 1901.

Other links to the monarchy include Henry VIII using the manor as part of his hunting ground while he would reside in a nearby property.

It’s believed that subterranean tunnels run from Addington Manor to Wickham Court and that Henry VIII used them to reach Anne Boleyn while she was living with her family at Wickham Court.

Though it’s not been explored to confirm the theory, owners of the manor think there is a bricked-up tunnel in the second basement. 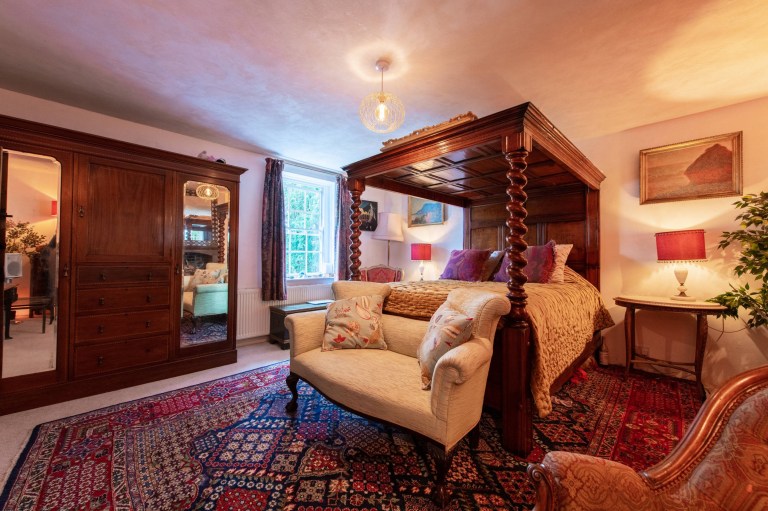 There are six rooms in the residence, which is believed to be the only ancient house of the manor (Picture: MediaDrumWorld/Sotheby’s Intern) 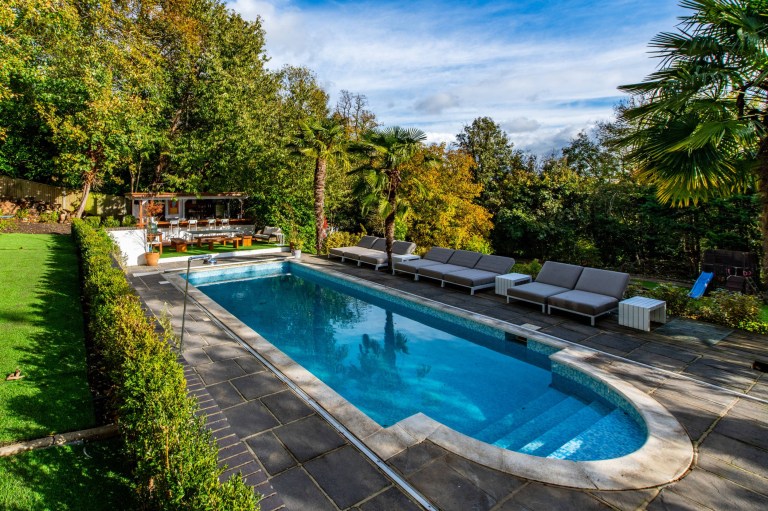 It has a large swimming pool (Picture: MediaDrumWorld/Sotheby’s Intern) 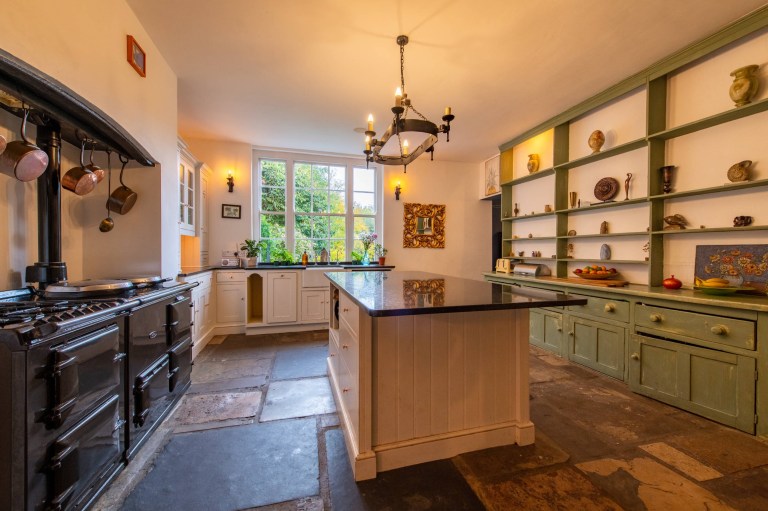 There is a spacious kitchen area (Picture: MediaDrumWorld/Sotheby’s Intern)

In 1953 the manor was leased to the Royal School of Church Music to house choirboys who sang at at the Coronation of Queen Elizabeth II.

Jason Corbett, Director of UK Country Office at Sotheby’s International Realty, says: ‘The house may be in the London area, but it feels much more rural – our gardens here are still visited by deer, pipistrelle bats and our resident owls, whom still have their homes in the surrounding ancient woodlands. It’s a very charming place.

‘At just over 7,008 sq. ft (651 sq m), this superb Grade II listed house from the seventeenth century with later additions, has all the contemporary and modern touches creating the perfect blend for today’s family living.

‘With five reception rooms and a kitchen/breakfast room on the ground floor, there really is a room for everyone.

‘Outside, the gardens are extensive with a picturesque blend of lawn, woodland, hedging with a heated swimming pool and entertaining area. The house is approached through electric privacy gates to garaging and additional parking.’

Addington House is currently up for sale with Sotheby’s International Realty for £3.5million.

How this couple transformed their London penthouse into a family home