After refusing to eat meat for 33 years, Nicolette Hahn Niman bit tentatively into a beefburger two years ago. She had become a vegetarian because she was concerned about animal welfare and the environmental cost of meat. Unlike most vegetarians, she had experience of the dire conditions on factory farms during her career as an environmental lawyer campaigning against pollution caused by industrial meat production in the US. Then she married a farmer.

Hahn Niman’s journey from vegetarian activist to cattle rancher to writing a book called Defending Beef may be driven by love, but it is also informed by a lawyerly desire to stick up for small farmers besieged by the growing ethical and environmental clamour against meat. The burger turned out to be an unexpectedly delicious brief pleasure, but it was the 18 years working on the ranch alongside the man who grilled it – and raised the cow – her husband, Bill Niman, that inspired her.

Hahn Niman was raised in semi-rural Michigan and was working in New York as an environmental lawyer for Robert F Kennedy Jr when she fell in love with a farmer. Kennedy Jr’s charity, Waterkeeper Alliance, was seeking to stop livestock farmers from polluting water bodies with slurry, and Hahn Niman began working with farmers who were doing the right thing, including her future husband. When the couple met for coffee in Central Park, “I just realised, wow, this is a really handsome man, in addition to his work that I admire,” she says, on a video call from her farm kitchen. When she moved from New York to the Pacific coast to be with Niman on the rough, arid terrain of his 1,000-acre ranch, she planned to continue as a lawyer.

“I began doing small tasks around the ranch and I discovered I loved it,” she says. “I said to Bill: ‘I’d like to work on the ranch.’ And he was shocked. I was still vegetarian at the time, and he was like: ‘Oh, wow, I didn’t think you’d want to be a rancher.’

“I wanted to be capable of doing whatever needed to be done here at the ranch. I didn’t want to be a helpless female.”

For seven years, she worked full-time on the farm, where they refuse to use chemicals on the land or animals, before raising their two sons. She says she and Bill are constantly learning. “The most important thing I learned was that in the two years I’d been working on agricultural issues as an environmental lawyer, I just scratched the surface in terms of understanding the real daily issues of agriculture.”

Many environmentally aware people believe that if they are still eating beef they probably shouldn’t be. Fuelled by the popular Netflix film, Cowspiracy: The Sustainability Secret, there has been a backlash against the meat. Rainforests are razed for cattle grazing, and the industrial farming of cows causes soil erosion and water and air pollution. Meanwhile, people who gorge on burgers, butter and ice-cream seem beset by chronic diet-related diseases and ballooning obesity rates. Worst of all, livestock farming is driving the climate crisis, causing around 14% of annual greenhouse gas emissions.

Hahn Niman’s time rebutting the claims made in Cowspiracy includes debating with one of the film’s directors in San Francisco. “It was really shocking because I’ve never sat next to someone who knew less about agriculture in my life,” she says. “Yet here is someone telling everyone how we need to eat and what we need to farm. I feel like I need to bring facts and reason in and say, ‘OK, you’ve heard this inflammatory statement. Where’s the truth? How do we get to solutions? We want to eat healthily and ethically – what choices should we make?’”

All the cattle on the 1,000-acre ranch are grass-fed. Photograph: Courtesy of Nicolette Hahn Niman

Hahn Niman’s argument is summarised by a slogan T-shirt she likes to wear: “It’s not the cow, it’s the how.” A cow is not an innate eco-devil, but how they are farmed is often fiendishly damaging. She does not defend grazing on obliterated rainforests, but joins other influential farmer-writers such as Gabe Brown, Charles Massy, Simon Fairlie, and the controversial, iconoclastic ecologist-grazier Allan Savory, in proposing a better kind of cattle farming. If cows are freed from barns and feedlots – the cramped dirt pens in the US where they are fed grain – and allowed to roam and eat diverse natural grasses and shrubs as their wild ancestors did, they can restore soils, enhance natural diversity and help capture carbon. Cows, she believes, can engineer healthier ecosystems, and healthy grass-fed animals provide meat with measurable health benefits over factory-farmed stuff.

This sounds reasonable, but the carbon cost of cattle is what troubles most environmentalists today. In her book Defending Beef, Hahn Niman explains how naturalistic cattle grazing adds manure and organic matter to the soil and encourages plants that help draw down carbon. Unlike crops, which are traditionally cultivated by ploughing the soil and releasing carbon, there is a wealth of evidence showing that carefully grazed grasslands sequester carbon.

But evidence also shows that grasslands’ rates of carbon sequestration tail off after 20 years. A scientific study in 2017 concluded that, at best, careful cattle grazing could offset 20-60% of its annual emissions. The same study calculated that, globally, 1g of protein per person per day comes from grass-fed animals, whereas 32g of protein per person per day comes from all animal sources including fish, with 49g from plant sources. Ruminants already collectively take up about a quarter of the planet’s useable surface; it would not be possible to move to grass-fed meat and keep eating it at current levels without devastating environmental consequences, turning forests into vast prairies.

These kinds of big global studies frustrate Hahn Niman because, she argues, they fail to account for the complexity and diversity of land. “In that report, they say, ‘This is crazy, you have this huge amount of land used for grazing and it’s only producing this tiny percentage of nutrition.’ But if you ignore what those lands could actually be used for in agriculture, then that statistic means nothing.” For instance, her own ranch has rough, dry ground and Mediterranean-style weather; they cannot grow crops there. So the Nimans are converting arid grassland into sustenance where no other human food could be produced.

Many environmentalists argue in response that if diets were to become much less meaty, all such grazing land could be rewilded, sequestering even more carbon, while cropland is farmed more intensively to feed the world. This, responds Hahn Niman, fails to acknowledge the soil erosion and carbon emissions caused by intensive, plough-based farming. As the innovative Australian farmer Charles Massy puts it, says Hahn Niman, “Natural landscapes have a way of functioning. And in modern agriculture and modern human life we tend to ignore what that functionality looks like – where there should be watercourses, grasslands, forests.” We need to “create agricultural systems that work with the natural land function, rather than just ploughing it and doing whatever we want,” she argues. Where grasslands occur naturally and have been grazed by wild herbivores for millennia, farming with nature is grazing cattle.

The current consensus is that livestock cause 14% of global emissions; Hahn Niman calculates that cattle make up 8%, but she writes of cattle farmers who claim to sequester so much carbon in their grasslands that their cows are carbon neutral. What is her best estimate of how much those emissions would fall if we only raised grass-fed beef? “As a lawyer, I understand the desire to create statistics that we can use as evidence, but coming up with a global figure is probably nonsense,” she says. Modelling of the emissions of natural grazing systems doesn’t account for how they positively benefit hydrology or water retention in the soil. “I’ve learned from living here for 18 years that even one part of our ranch is incredibly different from another. What you should do on the land is radically specific to that place. I am convinced that grazing, when done well, is probably beneficial everywhere. But to legitimately quantify how much [carbon] benefit you’re going to get globally – I actually don’t think that can be done.”

If the world switched to eating only grass-fed beef, people would have to eat much less and pay much more. Hahn Niman points out that naturalistic grazing does not mean meat would be only for the rich because many poor people graze livestock this way already. “We need to have food bear its full cost,” she says. “Cheap food is not the answer – we need to make good food available for everyone.”

The true cost of cheap food includes all “these downstream effects”: water and air pollution, soil erosion, animal cruelty – and the poor human health they cause. 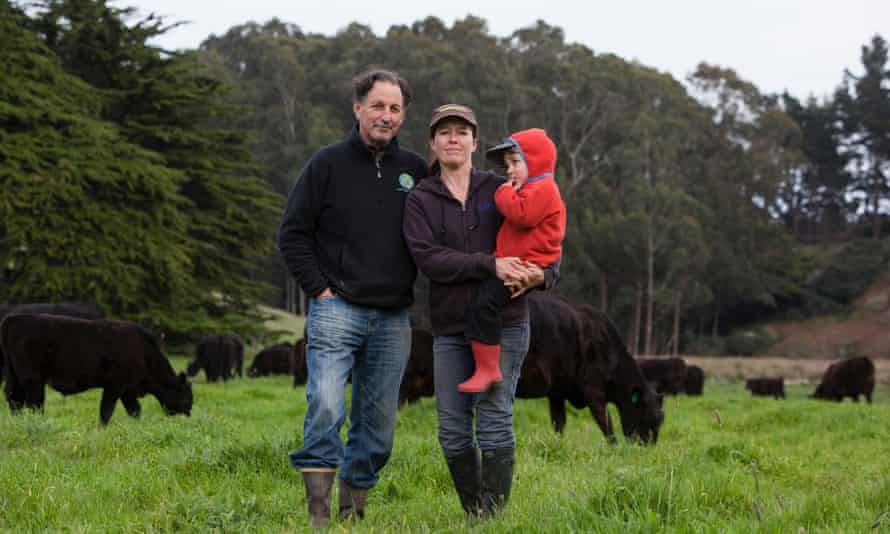 Proselytising the health benefits of grass-fed beef comes easily to Hahn Niman. She makes a good case for America’s obesity problem being caused not by grass-fed burgers, but by ultra-processed foods. Two-thirds of calories eaten by US children come from ultra-processed foods. These include the new generation of lab-made meats. She points out that a “confinement pork” producer (you can guess how the pigs are reared) she once fought as an environmental lawyer recently started a vegan food range. We need “real” food, not factory food, she argues.

Her own return to meat-eating was driven by health concerns as she turned 50, including a diagnosis of osteopenia, the precursor to osteoporosis. She cites research showing how livestock will deliberately graze plants to address specific health issues (another reason to allow animals to graze naturally) and believes that humans have the same kind of innate “nutritional wisdom,” as Fred Provenza argues in his book, Nourishment.

Hahn Niman accepts that moving to a healthier, low-carbon food system, when global capitalism is still pushing production in the opposite direction, is a challenge that can seem as overwhelming as the climate crisis. She believes it requires government legislation as well as consumers choosing to eat locally produced food. And eating locally requires more food production close to people’s homes and a demographic shift to the countryside: fewer than 20% of Americans live in rural areas; less than 1% work in farming. Post-Covid, there are signs of a move from city to country in many nations. Hahn Niman hopes such shifts will deliver a healthier outdoor life for many children. She observes the benefits of farm life for her sons, who are 12 and eight. “We forage for mushrooms and blackberries, we have our own orchard, so there’s a lot going on that involves their bodies and food – physical activity of meaning, not just going into the playground, which is fun too.”

Hahn Niman may have remained a vegetarian for many years after she became a cattle rancher, but after returning to meat she now eats it daily. “When I started eating meat again, I was reconnecting with my whole upbringing, my culture and the foods that I’ve grown up with,” she says. “I’ve felt physically and emotionally good. It’s been surprising how much joy that has brought me.”

Defending Beef by Nicolette Hahn Niman is published by Chelsea Green Publishing, £14.99. To order a copy for £13.04, go to the guardianbookshop.com. Delivery charges may apply