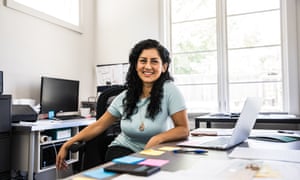 Getting the right funding is key to taking your business to the next stage.
Photograph: MoMo Productions/Getty Images

Securing the right financing at the right time can seem like a minefield for a small business owner. The list of options is long and the terminology can be confusing, covering everything from organising a bank loan, peer-to-peer lending or a hire-purchase deal, to talking to angel and private equity investors or starting a crowdfunding campaign.

But done right, an injection of cash can unlock growth and propel an established business to the next stage. We asked four entrepreneurs about their experiences of seeking financing, and what they’d do differently next time.

View it like a sales process
Flexible working wasn’t all the rage when Molly Johnson-Jones and Maurice O’Brien co-founded the recruitment platform Flexa in 2019. Johnson-Jones’s experience with an autoimmune disease and being told she couldn’t work from home led her to question why flexibility wasn’t used to attract talent. After the pandemic hit, she and O’Brien were able to raise £250,000 from a mix of angel and venture capital investors, signing the deal in October 2020.

“We had about 50 conversations over four or five months,” says Johnson-Jones. “And it was quite frustrating at times because everyone said to us: ‘Why don’t you just get the first £50,000 from friends and family?’ I think the demographics can be quite skewed towards wealthy backgrounds.”

The pair approached potential investors by presenting detailed financials up front but, looking back, Johnson-Jones wishes they’d seen it as a sales process. “We had all these models and projections, but it’s about telling your story,” she says. Keeping potential investors warm was made easier after they started a newsletter halfway through the process. The venture capital firm that backed them actually said no at first. “Three months later, I went back and said: ‘Your reasons are no longer valid. Talk to us.’ You have to be really ballsy about it.”

Johnson-Jones and O’Brien are planning to raise more investment this year, and this time Johnson-Jones says she’ll feel more confident about sticking to her guns. “We ended up with 35 versions of a pitch because everyone had an opinion. We listened to too many people’s advice.”

Research funding options
Christian Townsley, one of the co-founders of North Brewing in Leeds, says the business has used bank loans for beer vessels, asset finance for its canning lines, and even sold a small amount of equity to help fund a new £2.5m flagship site. “We’ve doubled our output at the brewery every year since launching in 2015,” he says. “There’s no way we could have done that entirely out of cash.” 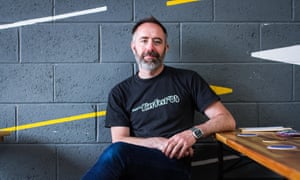 Christian Townsley, co-founder of North Brewing: ‘I think there’s great benefit in selling equity to people who are emotionally invested in your brand’

Looking back, he wishes he’d been more aware of the many funding possibilities out there, and willing to borrow more, earlier. “We grew relatively organically. We were pretty cautious about taking on debt until recently,” he says of the brewery and associated bar group business that he co-founded in 1997. Bringing in an experienced finance manager has also helped open up funding options, he says. “This manager’s understanding and ability to implement really strict financial controls helped us improve our cashflow and credit rating.”

Townsley is still protective of the company’s equity and won’t “give it away too cheaply”, but would like to try crowdfunding in the future: “I think there’s great benefit in selling equity to people who are emotionally invested in your brand and product. That’s a wonderful relationship to have with your investors.”

Find the right investment
In September last year, Sarah Fatchett raised £3m to grow her technology platform 365 Response, which provides critical transport software to the NHS and local government organisations. Fatchett launched the business in 2012 after a career with the Yorkshire ambulance service, but until last year had reinvested either her own money or sought funding through grants rather than looking for investment. “Just as the pandemic hit, we started getting really busy,” Fatchett says. “I needed to scale up fast and I didn’t want to do it on my own any more.”

She spoke to a number of private equity firms but struggled to find the right fit initially. “We learned that it wasn’t just about a high valuation,” she says. “It was about finding a respectable partner that would enable us to keep ownership and control.” Fatchett found the five-month process – all done remotely – really helpful when it came to honing her plans.

“There’s a set of due diligence questions, which cover everything: governance, legal safety, product, platform, people, history, trading,” she says. “Raising finance is a really positive thing to do as a business owner because it helps you to think differently. [You need to] be really clear about what you want to do, what you want to spend the money on, and why you want to spend it.”

Don’t be afraid to take risks
When Vicky Matthews and Caroline Gowing launched their virtual PA service Pink Spaghetti in 2009 in Cheshire, they did so on a shoestring. “We didn’t need a huge amount of capital to launch the business,” Matthews says. “And I think because we’ve managed to grow the business organically over the years, we were both reluctant to get any funding in. We’re both quite risk-averse and didn’t want to be in debt to somebody else.”

That changed after the pair franchised the business and were talking to a business coach about the need to invest in marketing support. Their chosen agency quoted £10,000, which was way above their budget. “Our coach suggested we look at a small bank loan. He said: ‘It’s not as scary as you think,’” Matthews says. “We only needed to borrow a small amount of money but it enabled us to work with this amazing agency, and accelerate the growth of the business.”

Pink Spaghetti now has more than 50 franchisees around the UK, and Matthews and Gowing even paid off the loan early. “I’m really glad we took the plunge,” Matthews says. “I think sometimes it’s easy to see having to borrow money as a negative thing. But, for us, it was an enabler – it helped us get to where we wanted to be more quickly.”