For Lynton, a small village perched on a picturesque hill overlooking the north Devon coast, this year’s summer tourist season has been exceptional. Holidaymakers from all over the UK have descended in huge numbers, arriving by coach, by car and on foot.

The scenes are perhaps unsurprising, given how many households have decided against international travel this year when faced with the expense and uncertainty of Covid rules. In July, the Resolution Foundation thinktank estimated that an extra £30.5bn and 300,000 jobs would be injected into British travel and hospitality sectors if tourists across Europe switched foreign holidays for domestic ones – with Devon one of the biggest recipients of this shift.

The experience of Ronnie Noughton, who runs a small Middle Eastern restaurant and coffee shop in Lynton with his wife, Daria, matches that prediction. He says it has been the busiest season in their 15 years of running the business. “Every day this summer, we’ve had to turn people away – some of them yearly return visitors, sadly.”

But there has been a catch – finding the staff to meet such soaring demand. A shortage of available labour has meant their 40-seater restaurant is now running at half capacity. “European workers who have permission to work in the UK are not coming because of the lengthy paperwork after Brexit. They’re also watching how the Covid situation evolves in England,” Noughton says.

These days, the couple’s friends often joke about them being “visibly stressed” by having to do everything themselves. Yet, they regard themselves as lucky after Noughton finally managed to hire a chef from Romania with pre-settled status, using an agency.

He paid for the recruit’s requisite PCR test on the second day of quarantine, but it took 72 hours for the result to eventually arrive. Noughton adds: “I don’t even know what to blame: Brexit or Covid – what is worse?”

Ronnie Noughton and his wife Daria say it’s been the busiest summer in their 15 years of running the business.

There are about 200,000 vacancies in the sector, a vacancy rate of about 10%, according to the trade association UKHospitality. After being on furlough for months last year, many of these workers moved to other industries that have remained open and busy.

“This is just more evidence of how hospitality has been uniquely hit by the pandemic as well as Brexit,” the association said. “There’s crucial need for the government to continue its support of the sector.”

The problem is not unique to Britain, with France and other European countries facing similar issues. But Covid-related labour shortages are being exacerbated in the UK by Brexit, analysts say.

Down the hill from Lynton, the harbour village of Lynmouth is also having a bumper summer. Queues line up for ice-cream every afternoon and fish and chips every evening, while visitors often struggle to find a table for dinner without reserving well in advance.

Jessica Floyd, 26, was born and bred in Devon and this summer has been working three days a week at the Ancient Mariner pub, run by the Bath hotel, one of the largest in town. Next week, she is switching to working full-time “because they are really struggling to get people to help”.

She adds: “Because of the labour shortage, they pay me well. At the same time, I am worried about Covid. I’ve only got one dose of vaccine.” 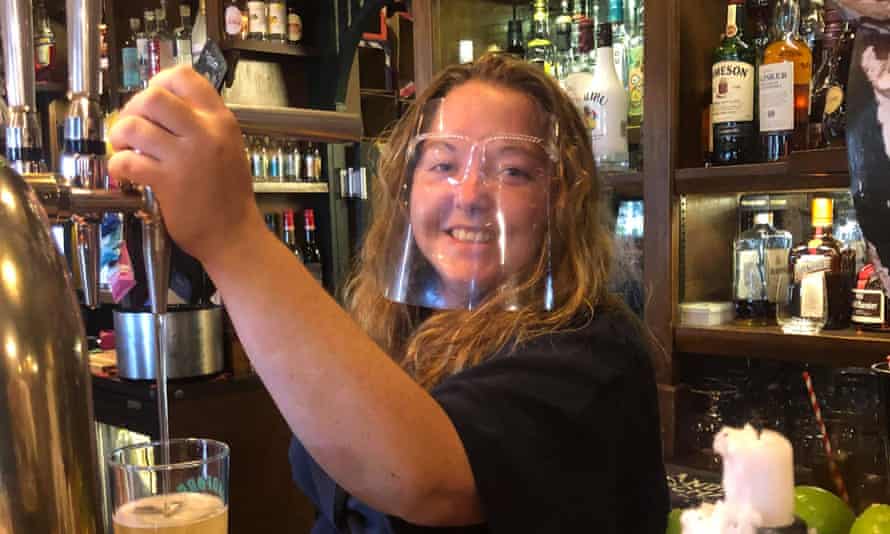 Jessica Floyd has been working part-time in a Lynmouth pub this summer and is now going full-time.

Her general manager, Samantha Chalkley, is grateful for the help. Brexit has made it a struggle to find enough EU workers to work in the kitchen and she is offering Christmas bonuses to try to get people to stay longer. “These days, new recruits are asking for 30% or more than existing wages. Without massive price increases, this is simply unsustainable,” she said.

Yet, it’s not just about wages, Chalkley said. “It’s a completely toxic mix – Brexit, Covid as well as health. Some of our people were pinged by the NHS Covid app and had to self isolate. I’ve also got staff calling in sick, including some with mental health issues.” She adds: “You kind of reach the top of the peak. I don’t even know what next week will throw us. I cannot plan ahead any more.”

With the scramble for temporary workers to help out, another problem has emerged: where to accommodate them?

“Our small town is overwhelmed. Some homeowners are now understandably reluctant to share their houses with strangers, due to Covid concerns. Others see the staycation booming and put their rooms up on Airbnb,” Chalkley said, adding that her hotel owner recently has had to acquire a house nearby, so that they can provide accommodation for extra staff from outside town.

In both Lynton and Lynmouth, businesses of all sizes share the same complaint about staffing. One of the larger hotels in Lynton was said to have bussed in workers from Liverpool to help with cleaning and running the hotel.

“It’s not surprising,” says Dan James, the rural enterprise manager at Exmoor national park authority. “Two-thirds of our employment in this area comes from tourism, even more so in Lynton and Lynmouth. There’s not enough working-age young population in this town to begin with, then you have a foreign labour shortage as a result of Brexit. And on top of that, there’s Covid. It’s really a perfect storm.” 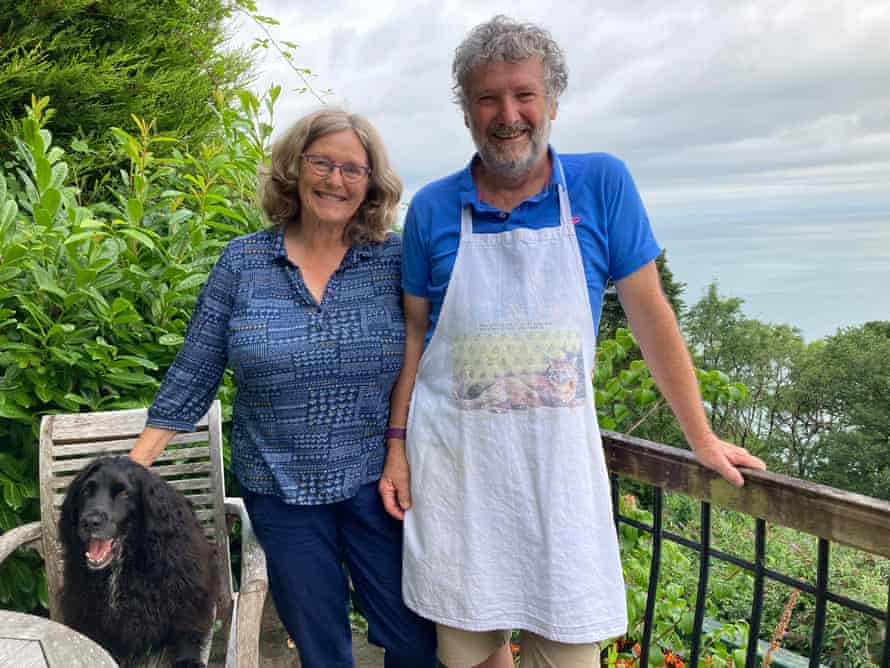 Sarah and her husband, Ian, moved to Lynton to run a bed and breakfast and two holiday flats 11 years ago. Photograph: Vincent Ni

Sarah Downing, 64, has mixed feelings about the situation. She runs a small bed and breakfast in Lynton with her husband Ian, 68. “Last year, we worried about when the business would return, but this year we’re struggling to cope with the influx of requests,” she says.

After leaving Cambridge 11 years ago, the couple moved to Lynton to run the small B&B and two holiday flats. “If you are the investor in a business, of course you’d feel delighted about the staycation boom,” says Ian. “But if you are the one operating it, it’s just exhausting. We also have to be extra careful with the virus.”

The couple said after nearly a year-long hiatus, their business began to receive bookings non-stop from this February and they have spent little time with their children and grandchildren since. But the long break during lockdown made them rethink the balance of their lives, so from this autumn they will permanently close the B&B and only run two holiday rental flats.

Sarah adds: “Family and health are the most important things in life. We are delighted that our business is booming, but it’s time for us not to be dominated by it.”

Uber to pay pensions to all its UK drivers, backdated to 2017 | Uber

If the UK’s energy suppliers were publicly owned, would we be having this crisis? | David Hall