South Australia is home to some of the best known wineries in the world, such as Jacobs Creek, Wolf Blass and Penfolds.

These are located in the Barossa Valley, the state’s most visited wine region, just outside Adelaide.

It’s a few hours north, however, where you’ll find some of the lesser known, smaller boutique wineries, in one of the state’s oldest and loveliest wine regions; the Clare Valley.

This area has more than 35 cellar doors, located between the towns of Auburn and Clare and is known for making excellent riesling among other delicious wines.

There is even a dedicated Riesling Trail; an old railway line that has been transformed into a beautiful 33km walk and cycleway that passes by many of the region’s cellar doors. 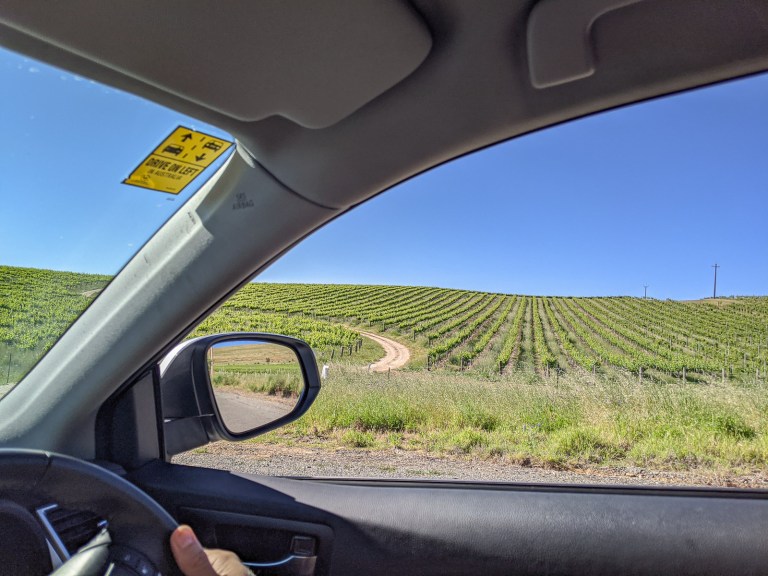 Driving through the Clare Valley

Landing in Adelaide on a Friday evening, we spent the night in the city, getting up early the following morning to drive the two hours to Clare.

The journey takes you through some beautiful scenery, big open green fields that gradually turned to vines as we approached the town of Clare. 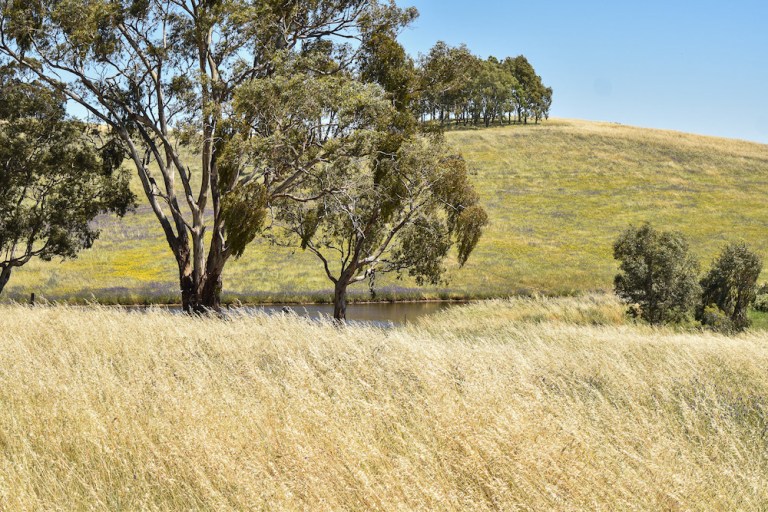 Beautiful scenery in the Clare Valley

We didn’t waste any time and our first stop was the bicycle hire shop. There are a number of places you can hire bikes around Clare, including many of the hotels. This gives you lots of options, depending on where you are staying or which wineries you want to visit.

It’s fairly flat for most of the route, but for those who aren’t especially fit (like me), there is also the option of hiring e-bikes, allowing you to work much less and travel faster.

This was my first experience on an e-bike and I have to say I loved it. Once you get used to the feel of the bike speeding up on its own, it’s a fantastic way to get around. You can also try out tandem bikes too. 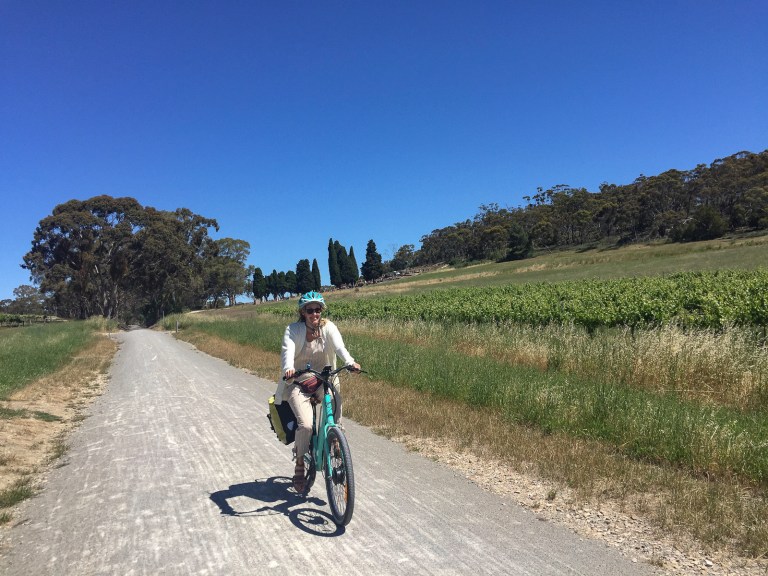 Riding the e-bike along the Clare Valley Riesling Trail

Once we had our bikes and helmets, it was straight onto the Clare Valley Riesling Trail.

It takes a minimum two hours to cycle the full trail at reasonable speed, longer when stopping for a tasting,so you may wish to cycle only part of the trail, or tackle it over two days.

Barinia is the where the path begins and we joined just south of this point. We passed fields of vines, native plants and trees and even the occasional kangaroo relaxing in the grass. 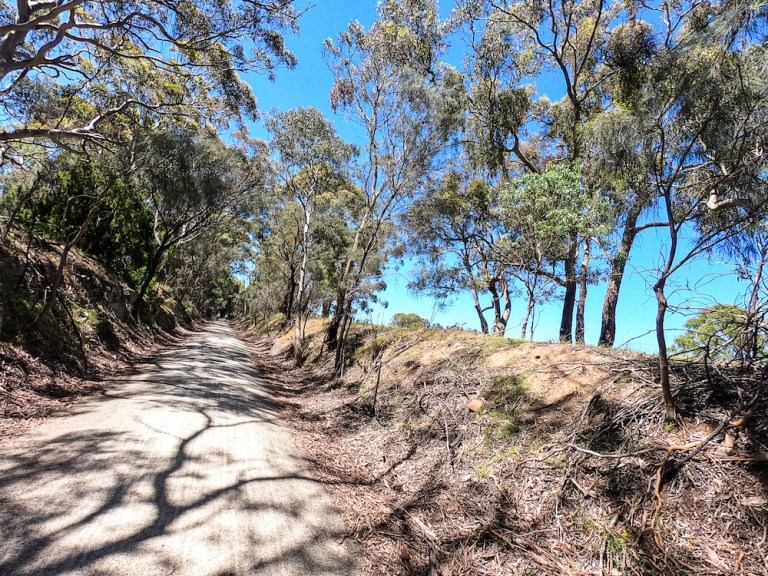 A shady section of the trail

The Clare Valley and surrounding areas are the traditional lands of the indigenous Ngadjuri people, who have inhabited the region for thousands of years. Along the Riesling Trail you will find a number of storyboards depicting their stories and history.

With over 35 cellar doors to choose from, you may wish to plan in advance and work out which ones to visit. Many take (and sometimes require) bookings, so it’s worthwhile being organised. Most wineries open between 10 and 11 and closed around 4 or 5.

We cycled past the cellar doors of Tim Adams Wines and Shut the Gate Wines before arriving at Sevenhill Cellars.

This is the oldest winery in Clare, and one of the oldest in Australia. Established in 1851 by two Jesuit priests, who had travelled to Australia from Europe. Upon arrival, they purchased 100 acres of land where the winery now sits and begin building, naming the property Sevenhill in honour of the seven hills of Rome. 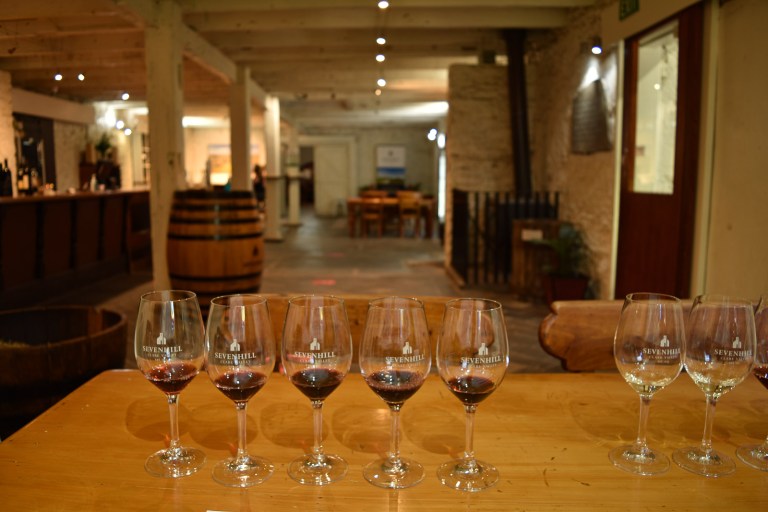 Sevenhill Cellars is the oldest winery in the area

The first wines were produced in 1858 and Sevenhill has continued to produce wines ever since.

The winery produces 90% of the sacramental wine used in Australia.

Once you’ve had a tasting, it’s well worth taking some time to explore the grounds, where you’ll find a number of buildings and shrines including a beautiful church that was completed in 1975. 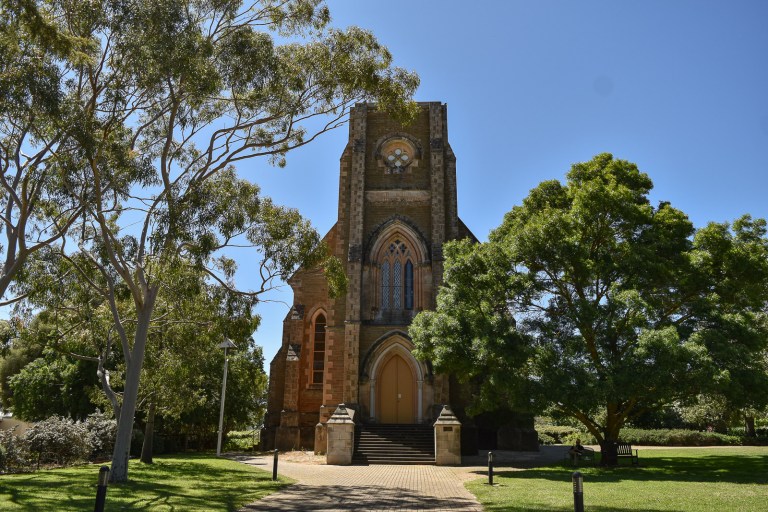 St Aloysius’ Church is a must-visit

Back on the bikes we continued south to Kilikanoon Wine.

This family run winery makes beautiful wines from a range of terroir.

One of the unique characteristics of the Clare Valley is that it has three parallel valleys, each varying in altitude, rainfall and soil sub structure.

This means that each neighbouring terroir can produce a wildly different and distinctive wine.

Kilikanoon has vines all over the Clare Valley and creates a beautiful variety of wines including riesling, shiraz, cabernet and grenache. 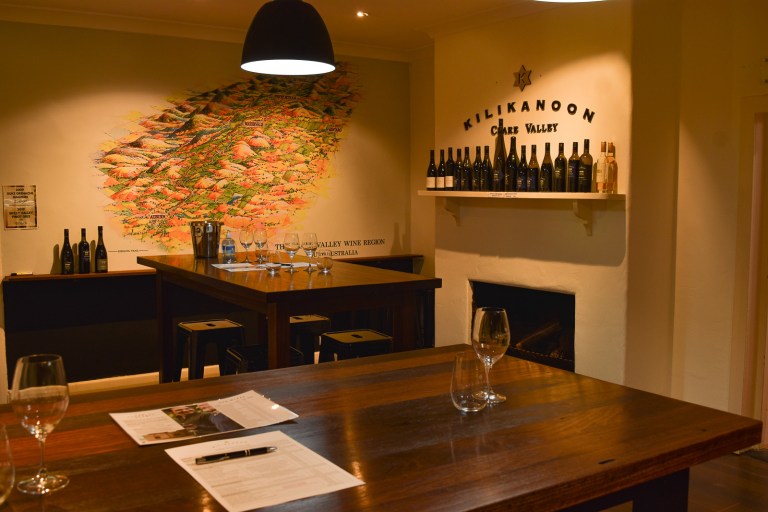 Here we were treated to a private tasting with a wine expert, who talked us through the different wines, explaining where they were grown and how the hot days and cool nights of the Clare Valley are the key to creating powerful and elegant wines.

Kilikanoon also has a lovely garden area, where you could easily spend a few hours enjoying the various wines on offer. 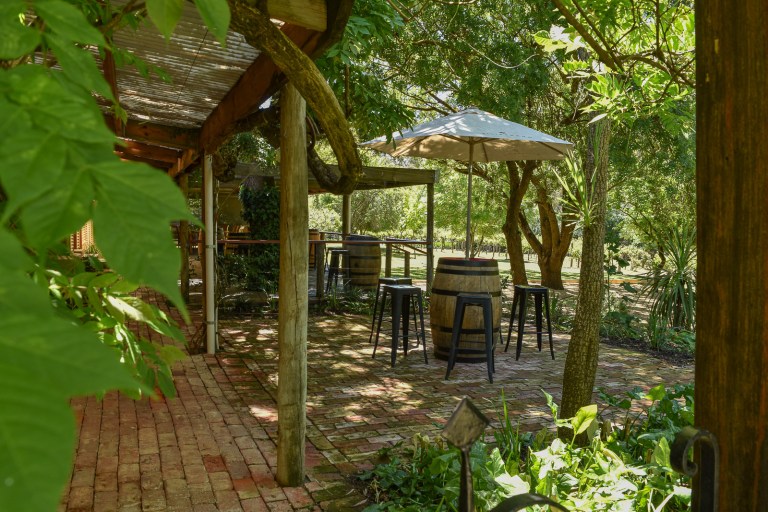 Next it was back on the bike for a short cycle to nearby Mitchell Wines.

Mitchell is another family run winery, with three generations of the family producing wines since 1949.

The vines are hand-picked and over the years, they have developed sustainable practices such as eliminating the use of artificial pesticides and dry-grown vineyards for water conservation. 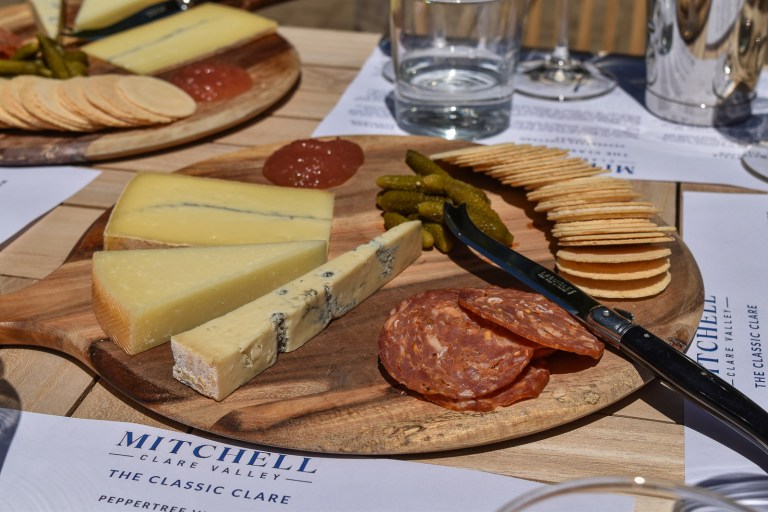 Go for a cheeseboard at Mitchell Wines

Here we indulged in a tasting platter featuring international and local cheese and charcuterie including Mont Priscilla Cheese from the nearby Adelaide Hills.

Edwina Mitchells, the Cellar Door and Marketing Manager, and granddaughter of the founding Mitchells, took us though a tasting, which included riesling, grenache, shiraz and cabernet sauvignon. 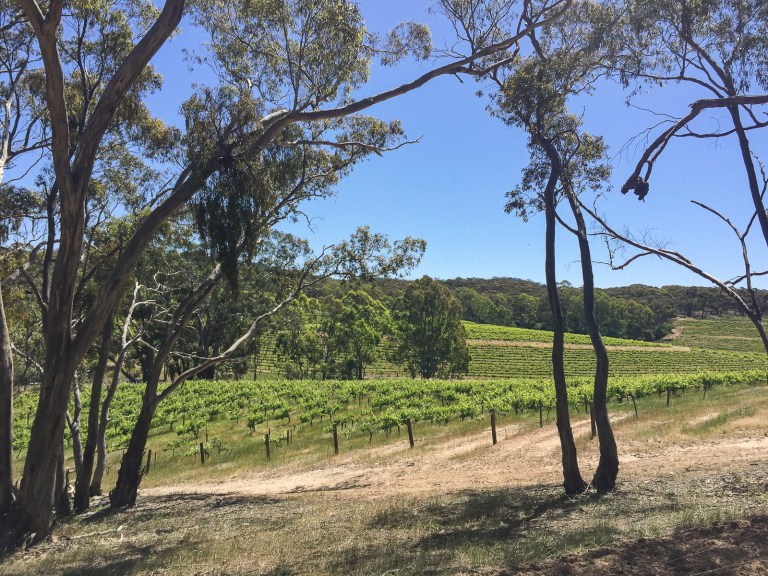 If you want to make purchases from cellar doors along the way, many wineries offer free shipping to your hotel so you don’t need to worry about carrying bottles on the bike. Some ship to the UK for an additional fee.

There are three loop trails that feed into the main track and allow you to return to your starting point via a different route.

At this point we took one of these loops and began heading back north, enjoying different scenery as we reflected on a fantastic experience in our now favourite Australian wine region, and began thinking about our next meal. 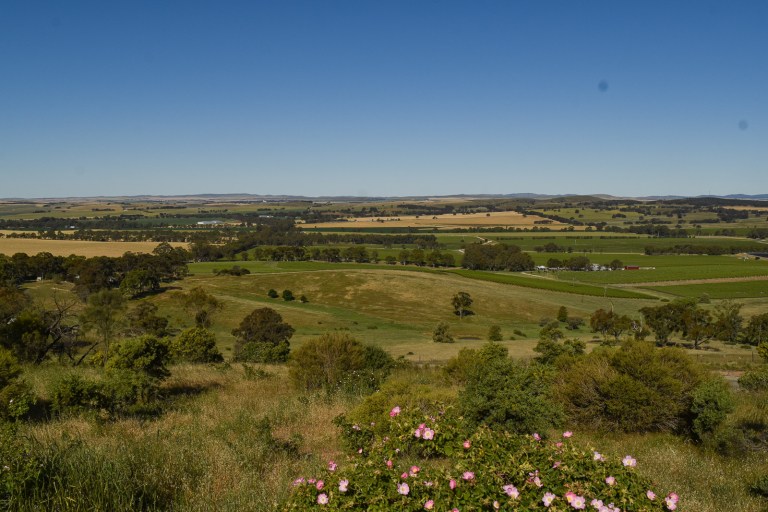 Make sure to stop and take in the views

Eating in the Clare Valley

There are lots of great food options in and around Clare, including many wineries with restaurants.

Skillogalee has a fantastic restaurant, as does Pikes Wines; our choice for lunch.

Slate Restaurant, located next to the Pikes Cellar Door, is named after the 650 million-year-old slate stone found in the soil of the wineries vineyards. 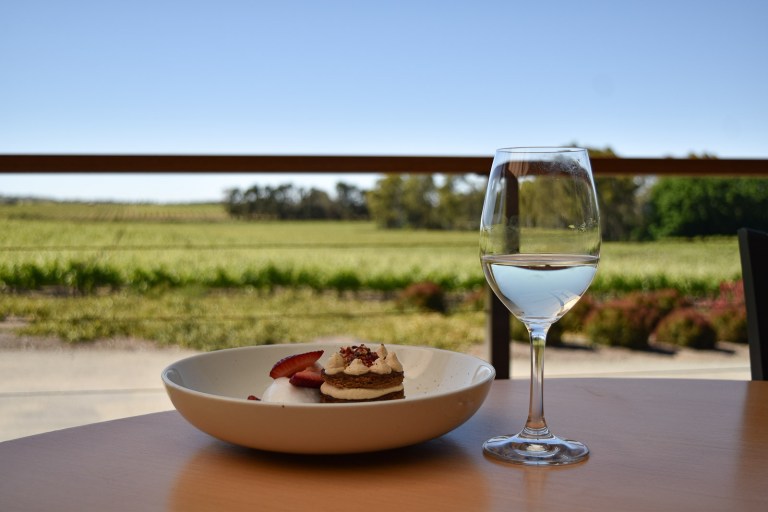 As well as making wine, Pikes also brews craft beer. The Pike family, who originated from Dorset, began making soft drinks and beer in 1886, and continued for the next 90 years, with sixth generation family member Alister Pike overseeing the existing brewery, built in 2014.

Beer tasting is available or you can enjoy a glass or two in the lovely gardens at Pikes Wines. 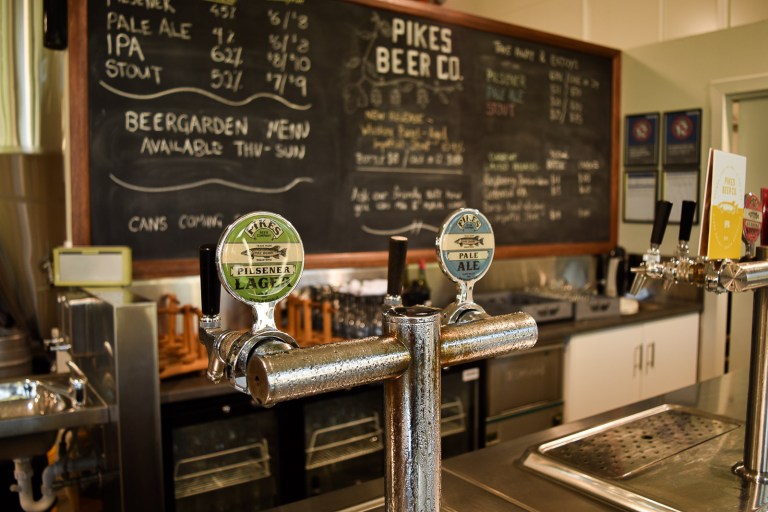 For dinner, Watervale Hotel is a fantastic choice.

The historic pub has been serving beers since 1847, run predominantly by female publicans over the years, including Esther Greenslade.

Esther built a jail at the back of the pub in 1863, where drunk and disorderly patrons were locked up until the police arrived. You can still visit the jail today, but fortunately it’s not needed to for its original purpose and is now used as a function room. 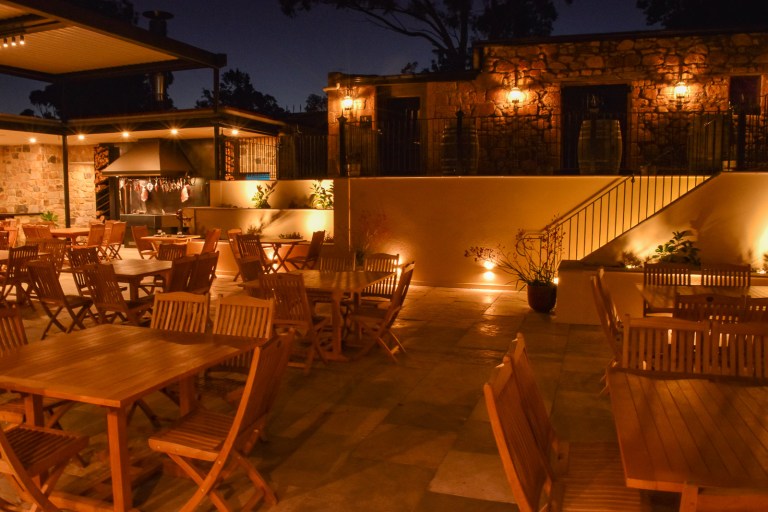 Watervale Hotel (the jail is at the top of the stairs)

The hotel has been lovingly renovated with beautiful interiors and a huge courtyard out the back.

The menu features organic produce grown on the hotel owners farm, as well as lots of local meats and regional seafood.

There is an extensive wine list featuring wines from all over the Clare Valley, and it’s a great place to go to try some of the smaller winemaker’s wines. 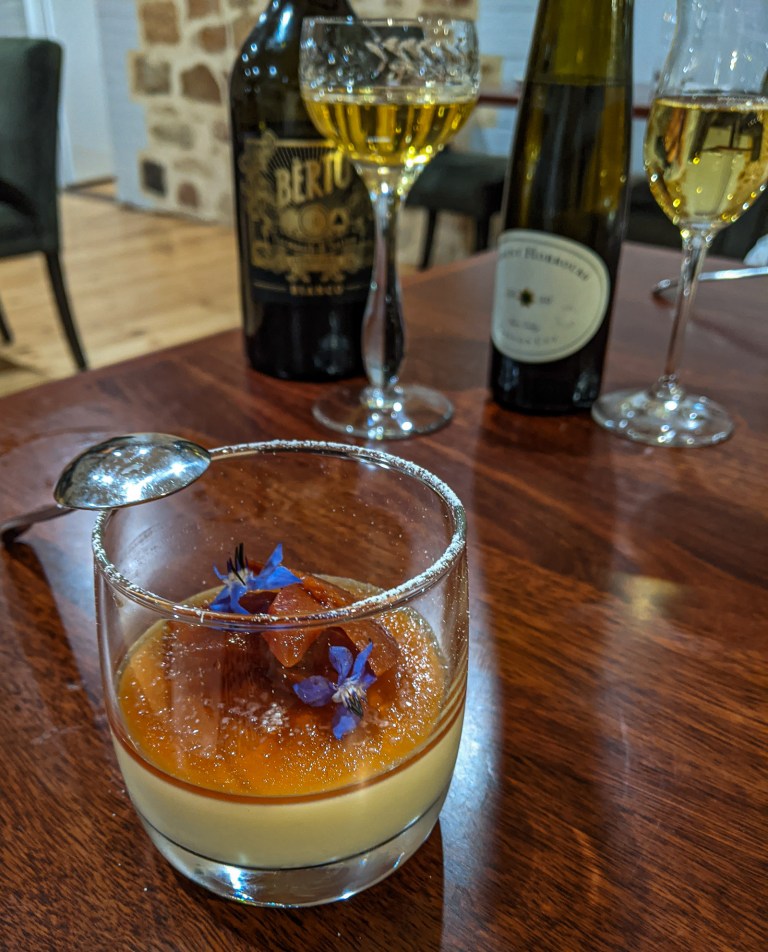 Dessert and wines at Watervale Hotel

Where to stay in the Clare Valley

The Clare Country Club is a 4-star resort with an outdoor pool, golf course, tennis courts spa and sauna. The restaurant serves breakfast and dinner overlooking the gardens and Lake Inchiquin. Rooms start from £78 ($137 AUD) per night.