A pristine copy of Sergeant Pepper’s Lonely Hearts Club Band lay on the turntable, next to a free bar stocked high with bottles of whisky, rum, vodka and gin.

That was my first sight as I stepped into what’s called a Gorgeous Mega RockStar suite on Sir Richard Branson’s first cruise ship, Scarlet Lady.

My ‘roadie’ – other lines would call him a butler – showed me how I could operate the curtains and mood lighting with a bedside tablet and pointed out the open-air shower on the extended balcony, along with two loungers and a red hammock.

Thankfully for any other passing seafarers, I also had a huge inside shower, with a window out to the bedroom, plus a dressing gown with Rock Star written in gold on the back.

All this might seem a tad unusual but then, compared to other cruise lines, just about everything about Virgin Voyages is different.

For a start, during my four-day round trip from Portsmouth there seemed a genuinely young clientele – many people were in their thirties and forties – as well as some much older, traditional cruisers who were wandering around as if they’d booked the wrong ship. 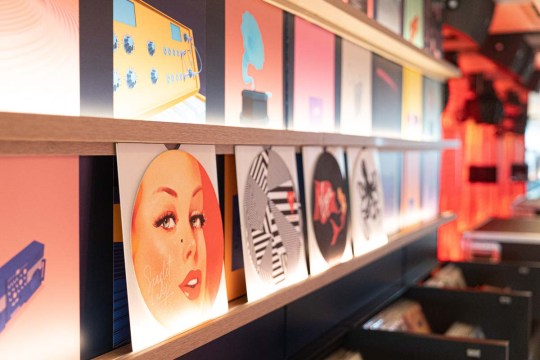 This cruise has a rock and roll feel (Picture: Virgin Voyages) 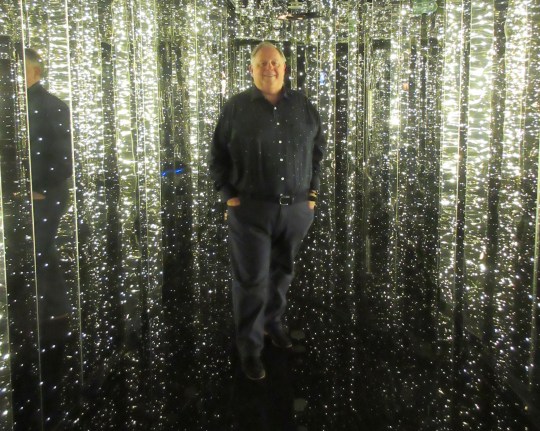 You’ll spot this in the boat’s interiors and entertainment offering (Picture: Dave Monk)

At midnight, when most cruise passengers are normally tucked up in bed, a talented band was just starting their set in The Manor nightclub – one of the best such venues at sea – which hosts DJs into the early hours. 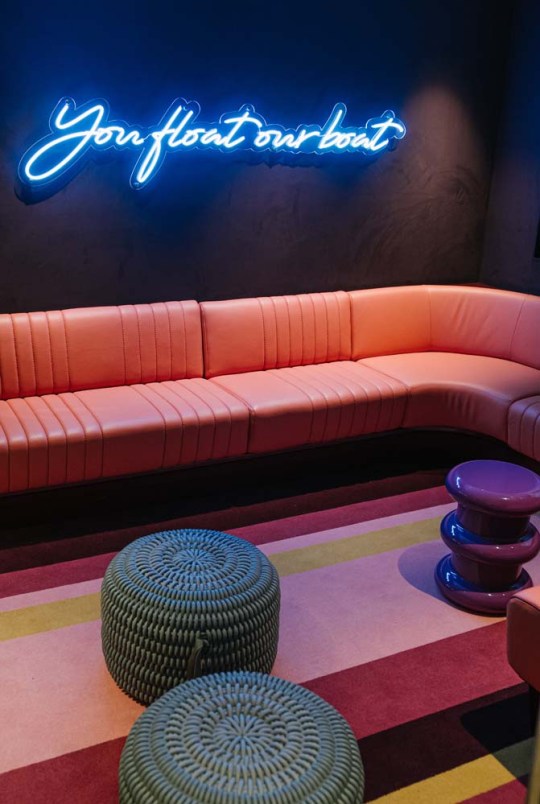 Instead of a conventional theatre there is The Red Room, whose stage transforms into different configurations to present acrobatics performances such as Duel Reality – a finely choreographed and breath-takingly athletic take on Romeo and Juliet – stage shows, or interactive entertainment such as dance parties.

On the food front, offerings include steaks in The Wake chophouse, vegetarian dishes in Razzle Dazzle, Mexican fare in Pink Agave, Korean sharing plates in Gunbae, Italian favourites in Extra Virgin and experimental cookery in The Test Kitchen. 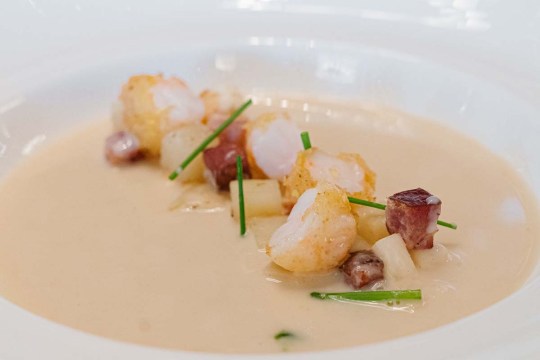 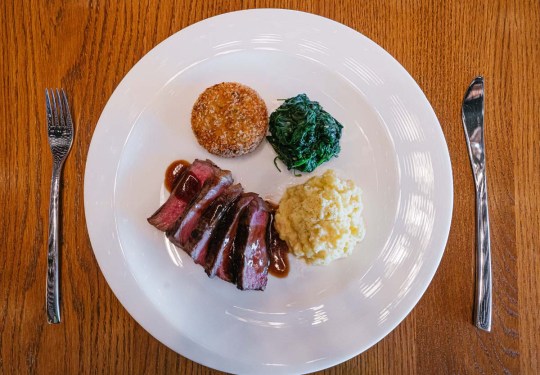 Virgin Voyages decided at its inception to shun buffets in favour of a food court filled with snack choices including a panini kiosk, burger grill, taco shack, sushi bar, soup and salad stand, and 24-hour American diner. On another deck is a pizza parlour.

Lounges include The Dock outdoor bar, Draught Haus beer venue and Athletic Club sports club. Tucked away is a lovely little pub called The Loose Cannon decked out like the inside of an old wooden ship.

All food is included in the fare, with occasional optional extras – and alcohol – priced separately. Tips are also covered and the wifi is free.

For fitness, sailors – as Virgin likes to call its passengers – have outdoor training zones with a boxing ring, running tracks and wellbeing pools, while the spa, barber shop, beauty bar and nail salon help them prepare for those special nights on board. 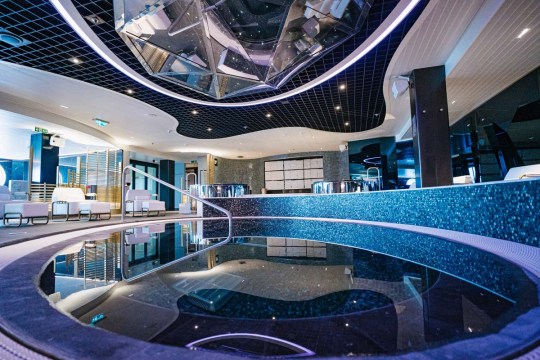 Take a dip in the wellbeing pools (Picture: Virgin Voyages) 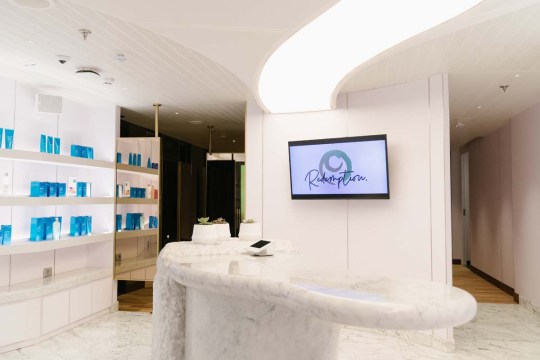 As for Covid measures, masks were optional for passengers and rarely worn, social distancing was requested but not enforced and people were actually allowed to dance (all cruisers have to be double vaccinated and produce a negative test on boarding).

My £1,000-a-night suite was one of the top 15 cabins on the normally 2,800-passenger ship, though the most lavish even include a separate electric guitar room. 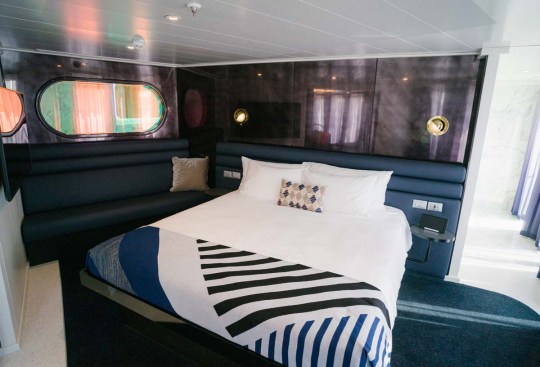 The most lavish suites have an electric guitar room, but the rooms at every level are pretty brilliant (Picture: Virgin Voyages) 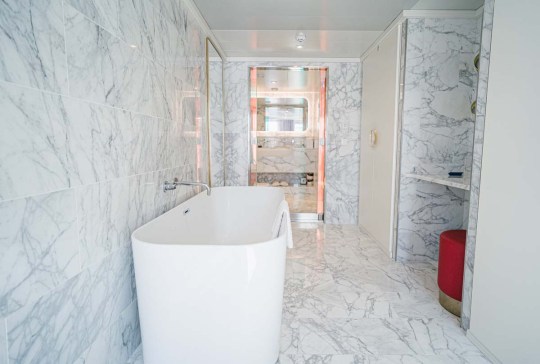 But what are the normal cabins like? Even the smallest ’sea terrace’ balconies have a bed that can partly swing round to become a sofa if you want to invite friends round before dinner. Storage is tight, so don’t overpack.

As a cruise writer, I have followed the story of Virgin Voyages since Sir Richard first announced his plans in 2015. I’ve seen Scarlet Lady grow from a steel shell in an Italian shipyard to a lively collection of lounges and bars.

When I first visited the finished ship on a rainy weekend in Dover last year, I wrote that the main pool was small, Virgin occasionally tried too hard to be hip, and regular cruisers would miss things like a large observation lounge or solarium at the front of the ship.

Those things still ring true and little things like signage need to be improved. 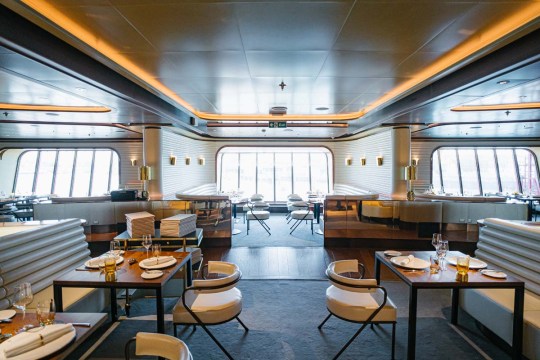 The ship could do with better signage (Picture: Virgin Voyages)

Early publicity about the line was about how innovative it would be, with its onboard tattoo studio and drag queen brunches.

After a year of pandemic, when the plans to sail Scarlet Lady from Miami to the Caribbean had to be delayed, the message has since evolved to concentrate on its more conventional features such as the top-rate restaurants, each with their own executive chef and galley.

The tattoo parlour, which caused a stir of controversy and confusion, is seen by the company not so much as a draw in itself but a signal that inked people are welcome on board – indeed, many of the smart, but casually dressed, crew sport impressive artwork on their arms. 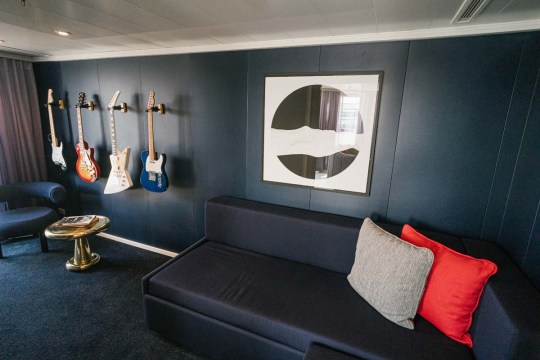 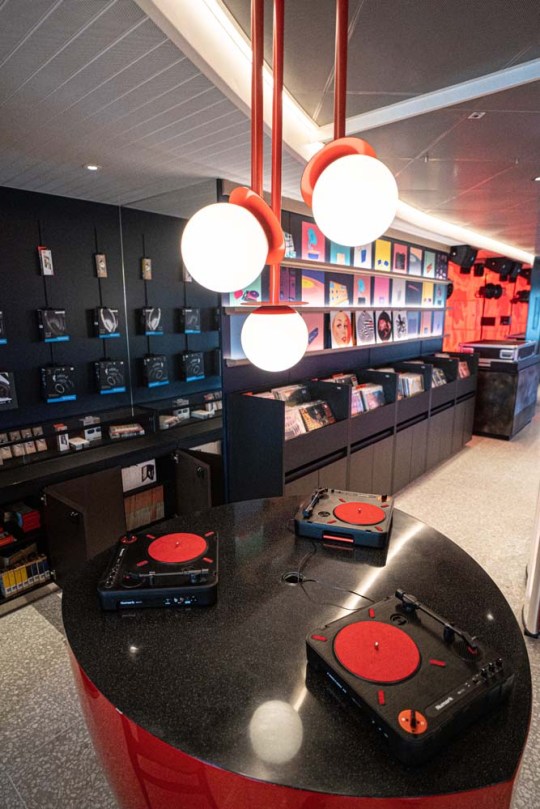 I fall firmly in the ‘love’ camp (Picture: Virgin Voyages)

After my visit in February 2020, I wondered if Branson would find the rebels to fill not only this ship, but a sister, Valiant Lady – launching from Portsmouth next year – and two more in the pipeline.

Well, on the evidence of my short stay on board with around 1,200 other passengers, the answer appears to be yes.

‘It’s like Marmite, you’ll love it or hate it,’ a crew member cautioned as he first escorted me on the ship.

My dial is firmly towards the ‘love’ sector – not everything and definitely not for everyone, but as a welcome addition to the range of ocean ships around.

If you’ve avoided cruising so far because you think it’s old and stuffy, this could be the line for you. Long live rock’n’roll.

Dave also writes about cruising on his blog, shipmonk.co.uk

Dad terrified after daughter, 3, describes family from her ‘past life’ & says she joined new parents after her ‘death’

‘The path was alive with army ants!’ – readers’ holiday encounters with nature | Life and style

Curated trips, photography, and experiences to satisfy your wanderlust

Monica Vinader reveals the cities that inspired her jewellery designs