They call the Azores the Hawaii of Europe (you can see why, the island is a tropical utopia – rainforests, lakes, waterfalls, black sand beaches, the lot), but my tour guide retorts, ‘Hawaii is the Azores of the Pacific’.

Located in the middle of the Atlantic Ocean, the Azores is an archipelago that boasts 9 islands in total – I stayed in the largest, Sao Miguel, but the others are a mere 50-minute plane ride away.

The Azores is an autonomous part of Portugal that often gets less hype than its mainland counterpart: you’ve probably partied in Lisbon or tanned under the Albufeira sun. But these Azorean islands are also worthy of a serene yet exciting adventure-filled holiday.

You can expect dramatic landscapes, pristine lakes, hedgerows of colourful hydrangeas, tea plantations, fishing villages, and if you stay in the centre, bustling nightlife.

One of the USPs of Sao Miguel, though, is the whale and dolphin watching tour. Sao Miguel has resident dolphins that are not ones to shy away from speed boats and camera-yielding tourists. Whales, too, will come up to breach, and some lucky tourists have even witnessed the mammals giving birth.

Sadly, when I went on this tour there were no whales spotted, but I was blown away by four different types of dolphins that greeted us – some of which came super close to the boat – they really love the attention.

Pro-tip – if you get seasick, sit towards the back of the boat which is less rocky than the front. Also ask for a raincoat as it can get very wet and cold.

Sao Miguel is a small island – you can drive its length in two hours – so when you stay in tourist-heavy places such as Ponta Delgada (where the airport is, and where I stayed), you’ll see a few excursion purveyors. 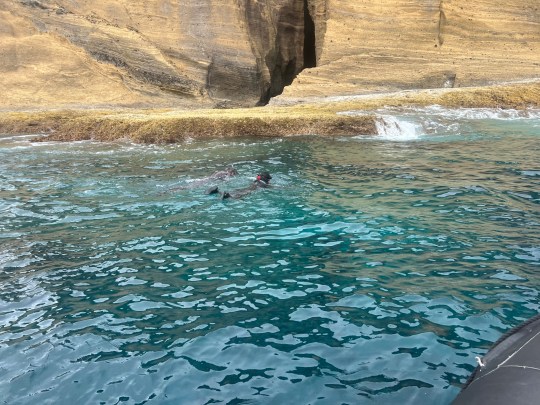 However, not every location has the best visibility and chances of seeing cetaceans (or even optimal waters for swimming) so my tour guide drove me to Villa France, which has calmer waters and very high visibility – ideal for snorkelers.

The island is also famous for its lakes, so you’ll want to book a jeep tour. 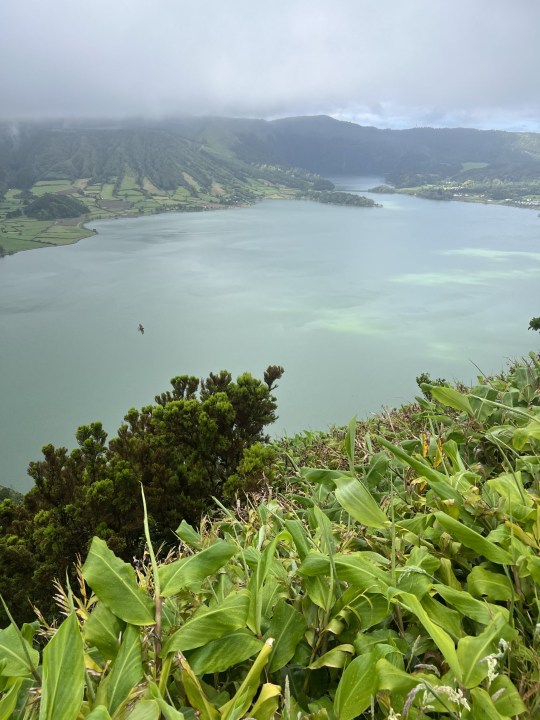 It’s cold when you’re on top of the sete cidades so bring a jumper (Picture: Faima Bakar)

Futurismo is a good company that has fun and knowledgeable English-speaking guides – I did the full-day jeep tour to Sete Cidades, one of the seven natural wonders of Portugal (it also included lunch and afternoon activities including kayaking on the lake and bike-riding).

Top tip – bring a hoodie and thick clothes for the morning, as it gets really cold and windy (with chances of rain) at the top of the lakes. On the bottom though, when it’s afternoon, it can get really hot, so take a swimsuit and light summer clothes too. 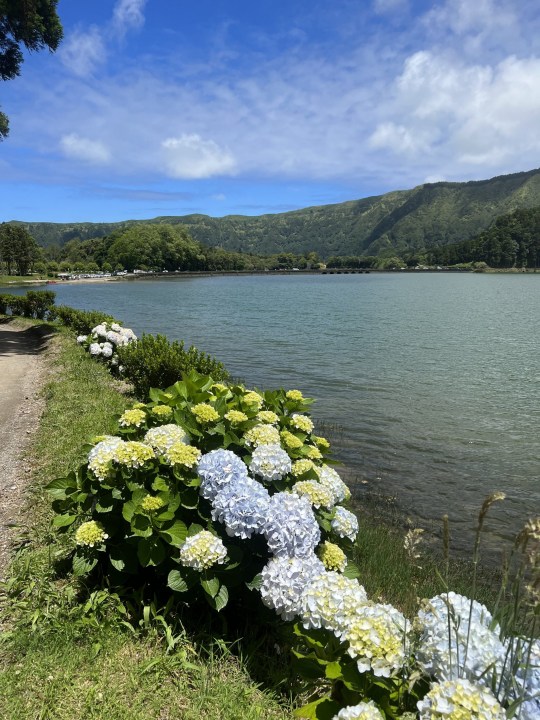 Azoreans will often say ‘you get four seasons in one day here’. Pack accordingly.

While I had a tour guide drive me around on most days – I would recommend hiring a car or booking taxis. If you are hiring then do it well in advance, as during peak times it can go up to €300. 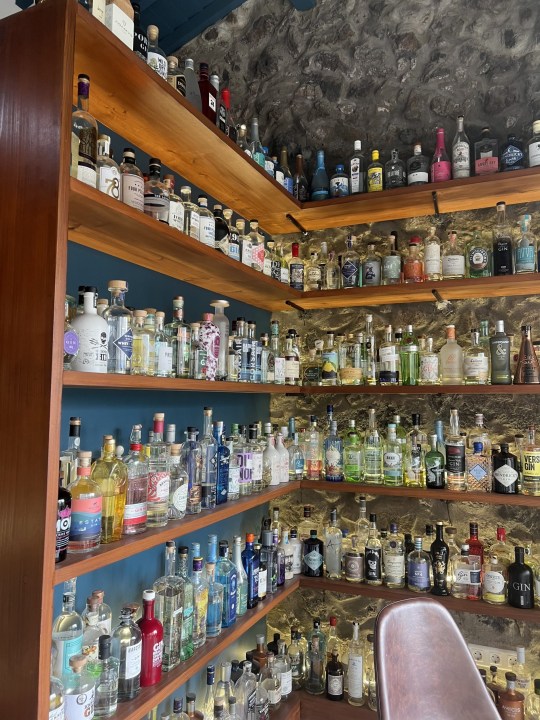 While it’s still in construction at the moment, an eco-estate and boutique hotel in Ponta Delgada, called Solar Branco, has a super extensive gin farm – boasting a library of 600 brands. You can walk in or book an appointment with them where you’ll be given a tour and be able to make your own signature drink.

Sao Miguel is also famous for its traditional dish, Cozido de Furnas – a meal cooked by a volcano. 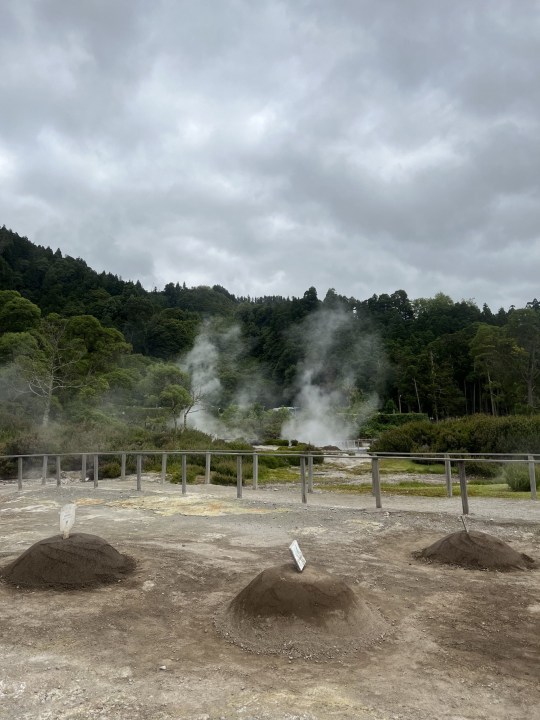 The heat of the ground is harnessed to cook meals (Picture: Faima Bakar)

Furnas, the village where you get this meal, sits on a volcanic warren of geothermal springs (so yes, you get loads of hot springs to swim in, more on that later) meaning you can use the heated ground to cook.

In the morning, restaurant owners drive up by the lakeside to leave their metal pots to cook for a few hours, returning at lunchtime to pick it up. 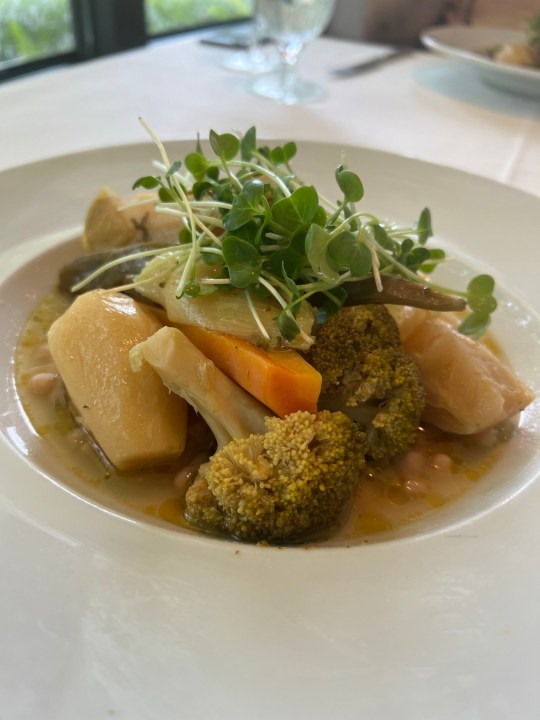 By then, crowds will come to see the meals – cooked with meats, carrots, sweet potatoes, taro roots and more – as they’re taken out, and it’s become a bit of a ceremonious affair.

Loads of restaurants in the town will also advertise that they’re offering the dish and you can see the logo on their vans as they pick it up. 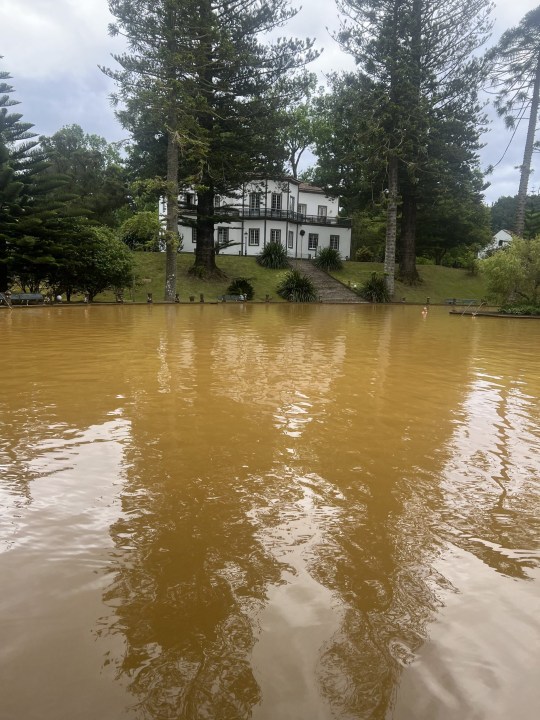 It’s not dirt, this hot sprint has just got this colour from the rusted iron (Picture: Faima Bakar)

I had mine at Terra Nostra Park, a huge garden with hot springs and jacuzzis, boasting more than 2,000 trees.

This is also a hotel (no, I didn’t stay here either) but for just five euros, you can get admission into the garden and swim around the hot waters for ages. 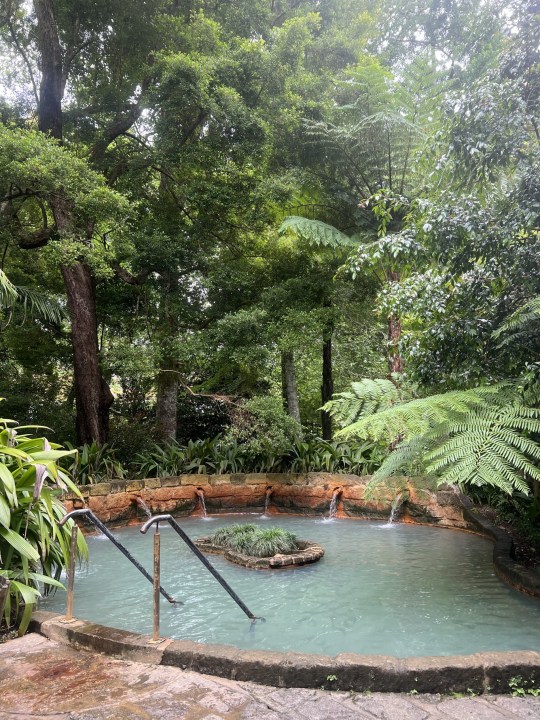 Just around the corner there are jacuzzi springs (Picture: Faima Bakar)

Bear in mind, the main pool is discoloured because of iron. I know it’s not the most inviting look, but it’s not dirty or unsafe for swimming in.

Other thermal baths include Caldeira Velha (which you can book or buy at the door, tickets are available). Here, you’ll find a thermal water cascade and pools so bring a bathing suit. They also have showers to wash off but bring your own toiletries and note that the water is super cold. 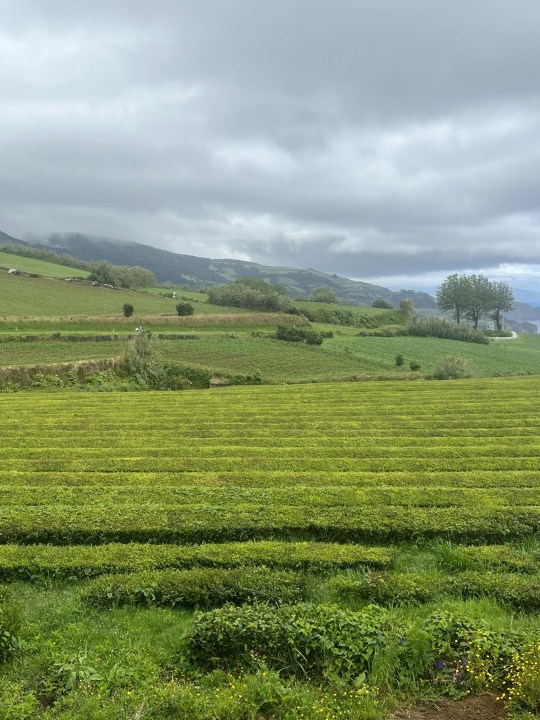 There’s also the Gorreana tea factory run by three generations of women (who still live together) that’s worth seeing, where you get to taste the delicious tea as well.

Then there’s a pineapple plantation inside greenhouses (as the Azores doesn’t have a tropical climate to grow these) of which you can get a tour and taste the delicious liquor made with it (they are also experimenting with rum). 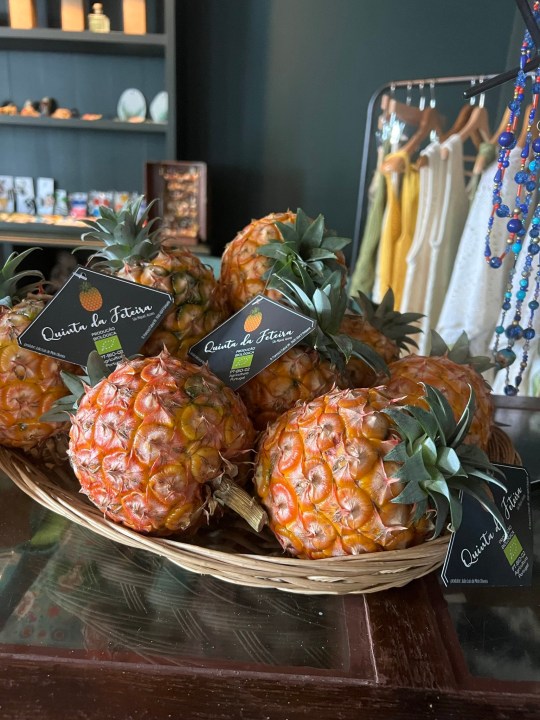 You’ll notice that flights to the Azorean islands are not so frequent, so it’s good that British Airways is now offering flights to the destination (I was on its inaugural journey) alongside Ryanair which also runs flights.

As for where to stay, there are plenty of hotels, with varying prices, as well as a few hostels dotted around the island. I stayed at hotel NEAT, which was located near what felt like the city centre as it had plenty of restaurants, bars, supermarkets and a beach nearby.

Next time you’re considering yet another trip to Lisbon, or a European getaway, why not venture to Sao Miguel, the Azoreans are all there to welcome you?

Do Casino Better Than Seth Godin

Use Casino To Make Somebody Fall In Love With You

Nature Calls: Farewell to the swallow ahead of epic flight to Africa

What to do, see, and eat in Basel, Switzerland