They call the Soča the emerald river. To my eyes it’s turquoise, or sometimes a shocking shade of sapphire. Or like crushed crystal, coaxed into flow. Either way, it’s irresistible. Our trail runs by it and, step after step, our heads are made motionless by those blue-green waters.

I’m in Slovenia but I’m not anywhere easily found on a map. Here, at the far east of the Julian Alps, is a land of water and woods. Half the country is forested, but the part we’re walking through is especially remote. Triglav national park is one of Europe’s oldest. In the middle sits the eponymous Triglav, Slovenia’s tallest mountain, spiritual summit of the nation’s fables and myths.

However, this ancient woodland has had a contemporary twist. As tourists poured into Slovenia over the past decade, encouraged by word-of-mouth news about its uncommon beauty, it was to Triglav they flowed. So, in 2019, the Slovenians designed the Juliana Trail, a route covering 270km, split into 16 stages on a circuit around Triglav.

That was all pre-Covid. After the country won a series of awards – Hottest Destination in the World 2019, National Geographic’s gong for most sustainable tourism in 2017 – managing the tourists attracted by such publicity became paramount. The pandemic paused the tourism, but only temporarily. And given that Covid has only further roused the appetite for immersive experiences in unspoiled forests and pristine lakes, Slovenia’s plan to protect its natural riches is proving invaluable.

“We asked ourselves, ‘How can we host our guests sustainably?’’’ says Grega Šilc, my guide. “The Juliana Trail spreads tourists more evenly, showing them paths they never see. And it takes them to villages that rarely get visitors, which helps the locals.” Born and raised in the park, Grega has that unfailing cheerfulness you often see in people who spend their days immersed in nature.

It’s 7am on our first day, and Goreljek meadow, the starting point of stage six, is submerged in mist. Ahead lies 22km through valley and woodland. Grega leads me and my photographer through pine-fresh forest, past fairytale-like chalets with gables as broad as summer hats and piles of firewood beneath their rims, each hut bearing a name and insignia like a boy scout. Mushroom hunters drift between the trees, backs stooped to gather them in.

My calves are tight, my bare arms sore from sunlight, but my mind is clear and bright and free

Soon we break free of the forest and into a valley. The mist lifts, and in the folds of the meadow we see cows chewing the glistening alpine grass.

“Only one has a cowbell,” Grega says, “and it’s the cow who knows the area best.”

Ancestral wisdom runs through Triglav like a river. As we descend into the Bohinj valley, we witness villagers engaged in autumnal rituals. An old man pours apples into a barrel, ready for homemade schnapps. A woman drapes hay on to a traditional hayrack barn called a kozolek. “Dober dan,” they call, good day.

After we break for lunch. Grega takes us atop a steep promontory where we feast like eagles in a nest, gulping spring water until it trickles down our chins. Then we take our fill of the view: mountains look like houses and houses like pebbles. 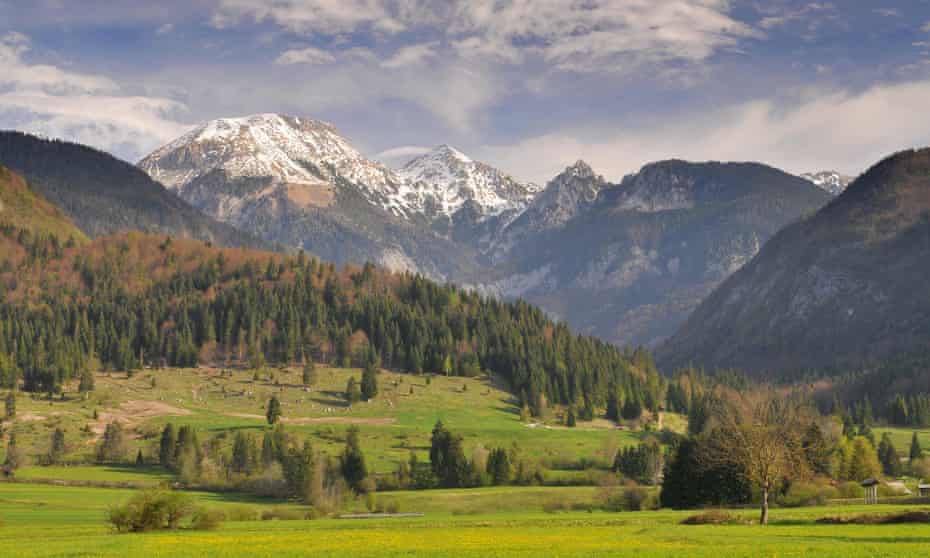 Now we’re descending, tumbling down steep slopes with the uncertain tread of foals, following Grega’s chestnut locks through sunshine and shadow. The talk stops and starts, then stops for what must be two hours. They say that to walk is to heal. One foot goes in front of the other, and the motion carries you out of the ceaseless, self-centred thoughts and into your body. Your only mission is to keep walking until you reach your bed. As the afternoon light grows dense and syrupy, sleepy Stara Fužina rises before us. My calves are tight, my bare arms sore from sunlight, but my mind is clear and bright and free.

Great rows of pine and spruce shield us from the sun, and we make light work of the mountainside

We stay at Majerca, a family-run hotel in the hamlet with an alpine-facing terrace. My phone says I’ve walked 30,000 steps, which is corroborated by my appetite at dinner. Our meal is an edible simile of the valley we’ve spent the day walking: truffles, mushrooms, juice from neighbouring farms, pork in cider sauce, and wines from vineyards within walking distance (well, for hikers at least). Our waitress pours us Bovec schnapps, reciting the recipe: gather armfuls of pine needles that are not quite green, not yet dead, and stick them in a jar for 40 days and 40 nights. I tumble into bed, my body, mind and soul sated.

“First stop, the village of Ribčev Laz,” Grega announces in the morning, bright-eyed and loose-limbed, “on the shores of Lake Bohinj.”

At either side of the lake, two peaks shed their garlands of mist revealing rugged shoulders and perilous contours, ribbons of vapour trailing around them. Within minutes, the valley lights up, and whatever breath I have left from the early-morning trot is taken from me. A bone-white medieval church overlooks a statue of the Four Brave Men, dedicated to the team who first summited Triglav. The lawns of the hamlet are bursting with the crimson and tangerine of late-summer blooms. 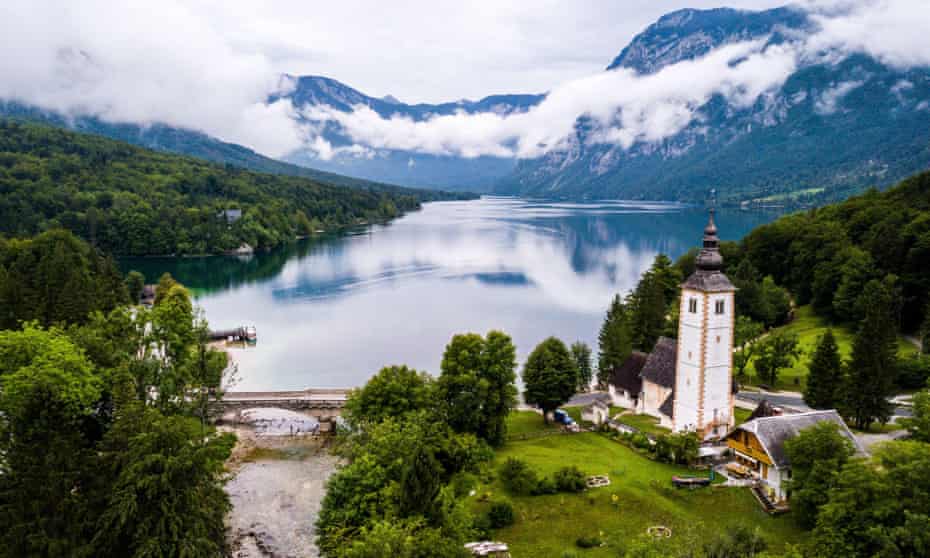 Saint John the Baptist’s church, near the village of Ribčev Laz, on the shores of Lake Bohinj. Photograph: Alamy

A coffee in the square, then we’re climbing more than 1,000 vertical metres, out of the Bohinj valley. My legs soon shake off their hiking hangover. Great rows of pine and spruce shield us from the sun, and we make light work of the mountainside.

Halfway up, we pause on a ridgeback to gaze on the valley, our achievement laid bare.

There’s another frontier, too. We pass a rock demarcating the boundary between Italy and Yugoslavia. The year 1920 is carved in stone which has outlasted both kingdoms and now sits unobserved and forgotten. We’re travelling westward to the Soča valley, by the cusp of the Italian border. Kobarid – better known as Caporetto – is our home for the night. I peer into the windows of the town’s award-winning war museum, vowing to return.

And then, on our final morning, there it is: the Soča River, a clear and singular epiphany. Grega sneaks us off the beaten track to Kozjak waterfall, whose roar fills the silence with awesome noise. The rest of the morning is spent clambering up and down the wooded slopes bracketing the Soča. Here it’s emerald, there it’s sapphire, and everywhere it glistens. 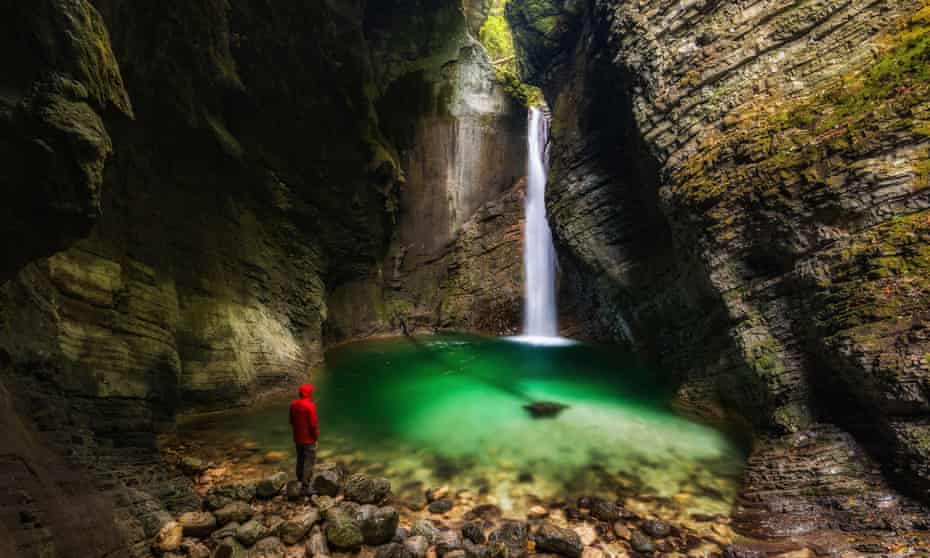 We’re greeted by other hikers with a friendly dober dan – only the third group we’ve seen. So is the Juliana Trail working? “Two hundred and sixty kilometres,” Grega puffs out his cheeks. “It’s a lot. So yes, our tourists are now deeper within the landscape, and less likely to get stuck in masses.”

Tomorrow we’re leaving, and the walking now feels somber and vital. As we enter the final village, exhausted into silence, we pass a sign for motorists. I ask Grega what Nasvidenje means.

“We use it to mean goodbye, but it translates as ‘until we meet again’.” I look back at the path, the patchwork of old routes now known as the Juliana Trail, at the beautifully preserved heirlooms of yesterday nestled in the valley, and I say it aloud: “Nasvidenje. Until we meet again.”

Grega laughs. “You see, that’s why we needed the Juliana Trail. People visit, and then they always want to come back!”

The trip was provided by the Slovenian Tourist Board. Hike & Bike, a specialist tour operator based in Triglav national park, offers single and multi-day tours of the Juliana Trail. A three-day tour of the Bohinj valley, including accommodation in a mountain hut, licensed local guide and all meals, is €405pp

Only most vulnerable may need Covid booster jab in UK, expert says | Coronavirus

Cosy hotels and Airbnbs to book for a Christmastime getaway

“Sweetie, I’ve Been On Hundreds Of Flights”: Woman Cusses At Teen Who Doesn’t Want To Let Her Have The Exit Row Seat She Was Already Settled In

Check out huge savings on package holidays to Spain, Antigua and Dubai

Travel: Why winter is the best time to visit Ibiza

12 houseboats where you can book a stay, in London and around UK