At the age of 23, Tashi and Nungshi Malik from North India became the youngest people in the world – and the first twins – to complete the Explorers Grand Slam, climbing the seven highest peaks on each continent including Everest and Kilimanjaro and skiing to the North and South Poles.

Six years on, they are now planning to ‘embark on a few expeditions with the express purpose of inspiring girls and women everywhere, especially in our home country’.

Talking from their current base, the picturesque city of Dehradun nestled below the Indian Himalayas, the two adventurers tell Metro.co.uk that the pandemic has been a ‘blessing in disguise’ as it has given them the ‘opportunity to reflect upon our journey so far and to crystal gaze at our road map for coming years’.

‘We have been able to do some real out of the box thinking on how we see ourselves pursuing bigger and bolder adventures as well as contributing to the impending global challenges especially around climate change and gender equality,’ they tell us.

Along with plotting new initiatives, the sisters been hosting motivational talks online for businesses and institutions to spread their message of perseverance and self-belief. 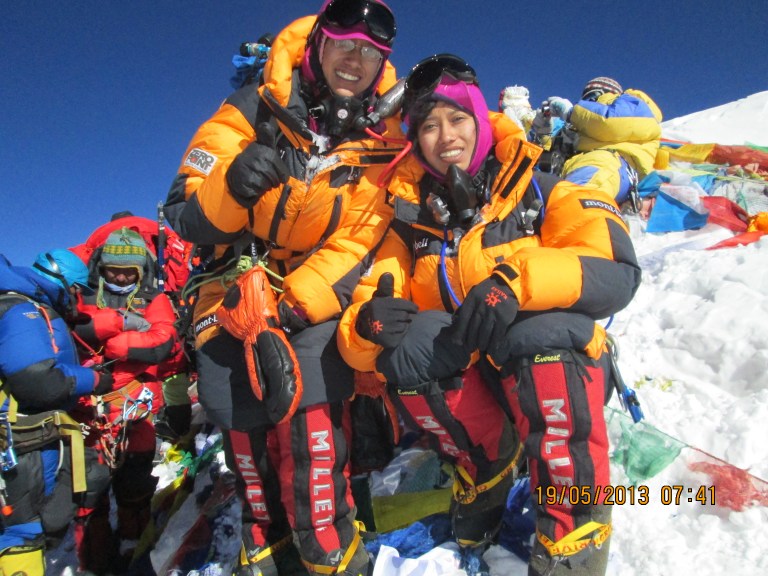 At the age of 23, Tashi (left) and Nungshi Malik from North India became the youngest people in the world and the first twins to complete the Explorers Grand Slam. Pictured, on the summit of Everest

Usually they would travel around the world and take to the stage, but the pandemic has forced them to be inventive.

Currently, giving talks over the internet is one of their main revenue streams as their adventuring careers have been put on hold.

Offering an insight into what they preach, the duo starts with the subject of mental strength which they say is ‘more important than physical fitness by far’.

Before taking on challenges big or small, they ‘train the mind to rule the body’ as they ‘strongly believe that when the body is saying ‘give up’, the mind can command it to ‘get up’’. 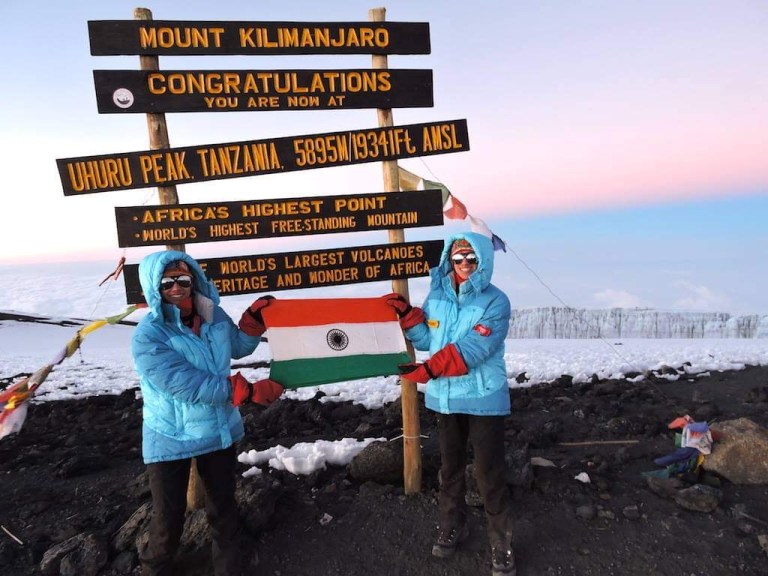 Six years on, the girls are now planning to ‘embark on a few expeditions with the express purpose of inspiring girls and women everywhere’, especially in their home country

Offering some encouragement, they continue: ‘Developing mental strength is a process that anyone can learn, we were taught this by our father who was a leader in the military.

‘It’s important to remember it’s not a one time, standalone exercise and it gets better with experience.

‘Each time you set higher benchmarks of risk and suffering, you will see an improvement to your mental wellbeing. It could just be running a little further each day, for instance, or challenging yourself to do 20 push-ups instead of 10.’

But the twins highlight that it is important to assess risk depending on your situation, as with extreme mountaineering, for instance, ‘there’s a thin line between life and death and it’s important not to overestimate yourself and push yourself to the summit’.

Secondly, on the subject of successful adventuring, the twins say that it is always important to remember why you are doing something and have a strong goal.

This way, you will remain motivated to keep going ‘despite feeling tired, hungry or uncomfortable’. 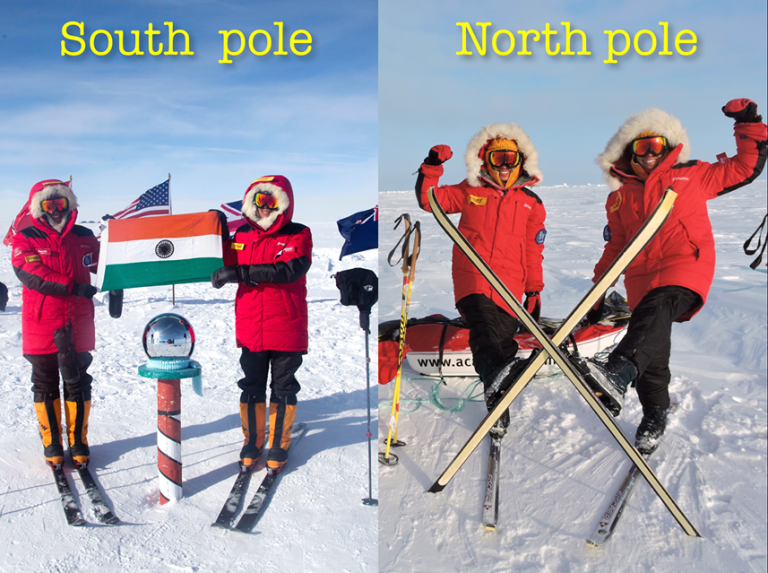 When it comes to expeditions, the twins say that mental strength is ‘more important than physical fitness by far’

Their key motivator has always been to demonstrate how women can be strong and pursue these dreams as ‘this is not typical in India where sons are hugely preferred over daughters’.

‘With all of the expeditions we know that we carry the aspirations and pride of millions of girls in India,’ they say, adding: ‘Our success is every girl’s success and that keeps up motivated.’

When it came to the Explorers Grand Slam, a key driver was the amount of money the girls’ parents and sponsors had invested in their record-breaking adventure.

Quitting was never an option, ‘except in case of direct and certain danger to life or limb’, as they knew another attempt to get to the top would cost tens of thousands of pounds.

With that in mind, they kept going but they were very close to turning around when they were climbing Denali, the highest mountain in North America at 20,310 feet.

When they reached a camp at 14,000 feet, they were caught up in a very long and severe snow storm with temperatures dipping to minus 40 degrees Celsius. 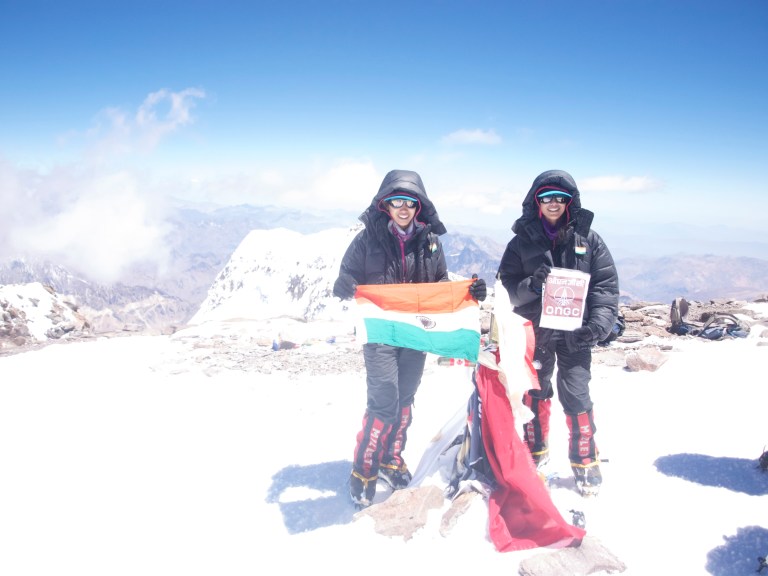 The sisters seen on the top of Aconcagua, South America’s highest peak at 22,841 feet

Recalling the scene, they say: ‘We were holed up in a tent the size of a double bed with absolutely no way to move about.

‘One week was like hell, yet our biggest worry was the increasing possibility that we would have to abort our attempt. Our rations and fuel were meant to last only a week extra, and were almost over.’

By the end of the week, the girls had reached the point where they had to make a decision, either to descend or ascend.

Most of the climbers from fellow teams had already descended but aware that this would make a big hole in their budget, they hoped for an improvement in the weather and took a ‘huge gamble’.

Thankfully, the weather cleared and by the time they reached the summit, there were blue skies and rolling views to greet them.

They said of their nerve-wracking climb: ‘The perseverance in the face of extreme odds gave us immense self-confidence. We cannot describe the feeling when we finally stood on top of North America! 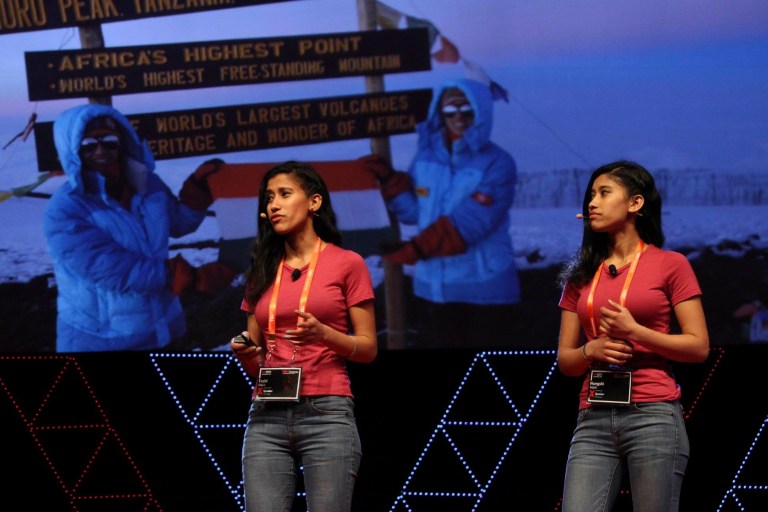 Usually the twins would travel around the world and take to the stage, but the pandemic has forced them to be inventive. They have been hosting motivational talks online in a bid to make money

‘Only one Indian woman had earlier climbed this peak, and even she succeeded only in her second attempt.

‘We had done it in the first attempt and under conditions that had scared most climbers to abort their attempts.’

Tashi and Nunshi say that they have used many tools they have learned from expeditions during the Covid-19 lockdowns.

‘From our extreme adventures, we believe that every problem has a solution. We know that the lockdown is a temporary condition and the opportunities therein should be used optimally.

‘We have been inspired to see how people have been dealing with the pandemic in so many innovative ways and there has been lots of humour amid the heartache.’

Armed with an infectious sense of positivity and forward-thinking, the twins conclude before heading off for a spot of yoga: ‘We constantly remind ourselves that we are more resilient than we think and our best version is only shaping up.

‘We stay focused on our life’s vision, our purpose and to quote from our favourite poem ‘If’ by Rudyard Kipling, we try ‘filling each unforgiving minute with 60 seconds worth of distance run!’’

Call Of Duty: Scump discusses his parternship with Oakley

This hotel chain is launching a 11:59pm checkout option

The best holidays in Scotland 2021: From hotels to the Harry Potter train