There is a rightness about sailing a Norfolk wherry that leaves you feeling in harmony with the world. As a sustainable form of transport, a wooden boat being propelled across the water by the wind is about as low-carbon as you can get.

I must confess, though, I had never heard of a wherry before setting off on an overnight trip from Wroxham on the Norfolk Broads. Little wonder, as there are only eight of these traditional boats still sailing from a fleet of hundreds that once earned their living delivering goods around Britain’s waterways. Later, some of these trading vessels were converted into elegant cruisers such as the Ardea (Latin for heron), where I am to spend the night.

I descend the narrow staircase and am transported back to the elegance of the 1920s. The teak-lined cabins are a statement of style and true class. For a moment I have returned to an era when the Norfolk Broads were a destination for the wealthy and famous, a time when adventure and glamour were something to be sought amid the beauty of your own country, not by leaping on a plane to elsewhere. 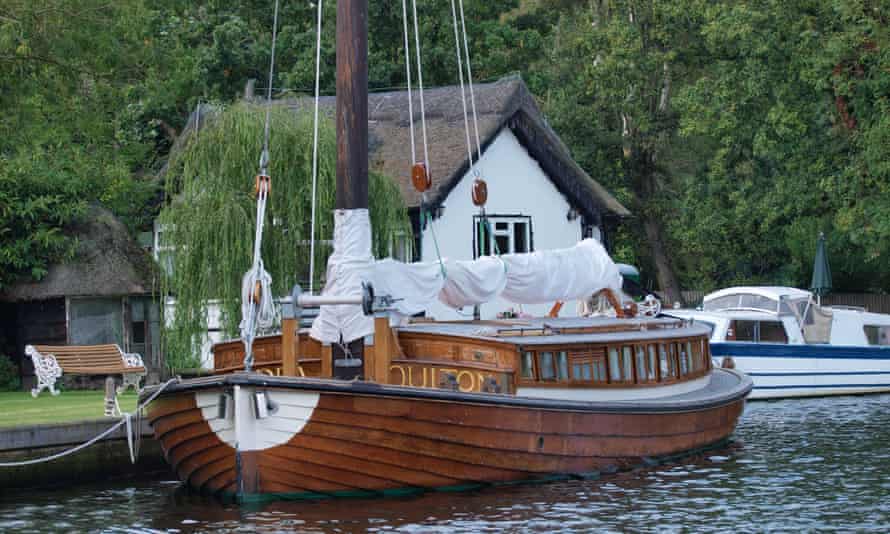 The Ardea moored up in the Broads. Photograph: Alamy

A tiny piano occupies one corner and comfy armchairs are dotted around the saloon. I long for a period costume in which to sashay around sipping champagne from crystal glasses while listening to a tuxedoed pianist. The Ardea is a piece of living history and I wish to live it to the full.

I lie back under a dark sky, watching shooting stars burn trails across the nigh

Instead, I join the rest of my party up on deck and drink Norfolk gin and tonic as motor launches chug past, their temporary captains wrestling with the steering as they try to avoid the larger pleasure cruisers coming the opposite way.

We head out to dinner at the Fur and Feather in nearby Woodbastwick, where I enjoy a fine steak and an English whisky. It is night when we return. The Perseid meteor shower is reaching its peak. I lie back under a dark sky, watching shooting stars burn trails across the night. I sing Billy Bragg’s A New England, wishing on “space hardware” as a flotilla of swans sail by and bats flit above the water. 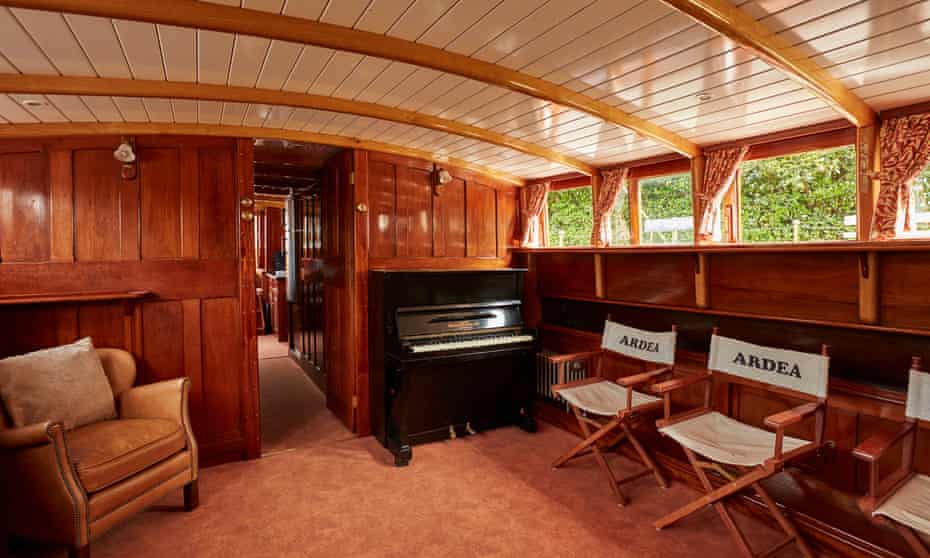 The next morning, as I doze in my comfortable cabin below the waterline, the swans are locked in battle up above. I can hear their feet paddling past as the water slaps against the hull of the boat. I think about the people who may have dozed here before me. It is rumoured that 1950s film star and ukulele player George Formby, who owned a riverside mansion close by, came to parties on board. Later on, the boat was owned by a Parisian madame who used it as a place of rest and recuperation for the women who worked in her brothel. I picture one of these girls lying with her stockinged feet against the cabin wall while she takes a break from a long shift.

After breakfast we transfer to another wherry, the 10-metre White Moth, built in 1915. Like all the wherries she has a chequered past, moving from luxury charter yacht to houseboat before being sunk in a dyke. 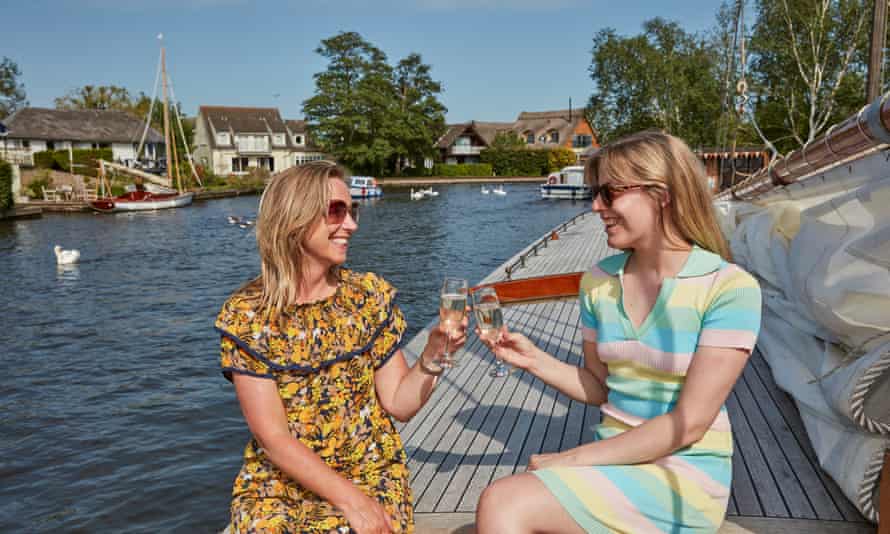 The wherries can be chartered for special occasions

White Moth is one of five (of those remaining eight) vessels rescued by the Wherry Yacht Charter charitable trust, which restored the boats with the help of National Lottery Heritage Funding and now uses them for education and day trips as well as event and weekend charters. A team of enthusiastic volunteers help maintain and skipper the vessels.

The boat tilts into the wind and we sway on deck in time to her decisions. It is as if the boat and the elements are communicating

Our skipper for the day on White Moth is Dean Howard, who began as one of several apprentices the trust recruited, recognising the need to enthuse and train younger people in sailing the boats if they were to survive.

We head out along the River Bure. Although some of the boats have electric engines, the trust prefers to travel by sail where possible. It makes a world of difference. As we leave the day trippers behind, there is only the creak of the ropes and the clink of brass cleats to be heard as we slip past banks tufted with the candyfloss flowers of hemp-agrimony. Dragonflies keep pace alongside and a heron takes off from a dead tree.

We head across Wroxham Broad in full sail, sending children in dinghies giddying around us like whirligig beetles. Tourists on paddle steamers snap photos of us. We wave back regally. We know we look magnificent.

The boat tilts into the wind and we sway on deck in time to her decisions. It is as if the boat and the elements are communicating, and we humans are mere passengers. The moth wing of the sail, white as an oyster shell, bends to take the wind. Dean leans against the tiller, ropes running through both hands. I get the feeling he is in conversation with the boat, a constant dialogue of question and reply.

“Does each boat have its own personality?” I ask.

“They are all different to sail,” he says. “Would you like to try?”

I would. I climb down into the skipper’s well, and attempt to guide the tiller, while Dean operates the sails. He has made it look like light work but it is not. It takes weight to move the tiller, which is better operated with the hip or the back, leaving the hands free for the ropes. At 5ft 2in I can barely see over the deck, and stay alert to Dean’s instructions. 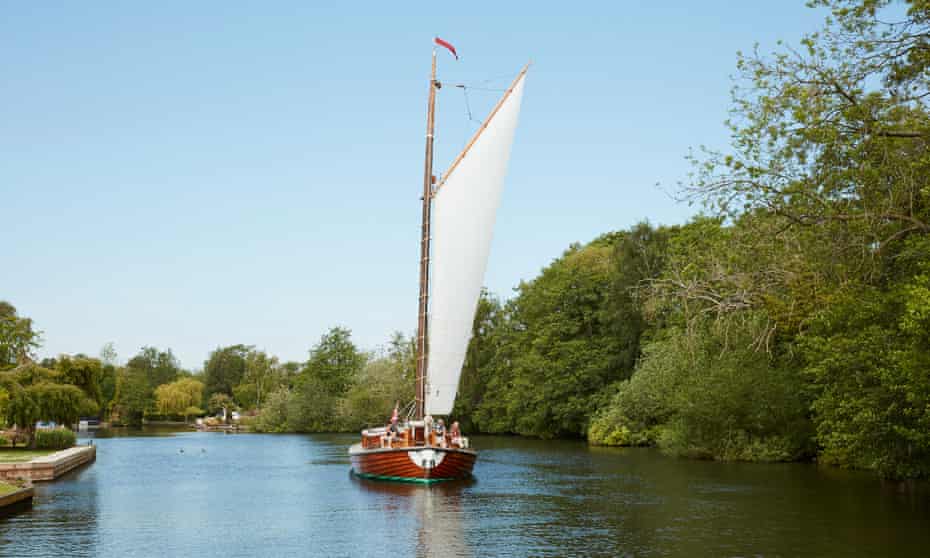 The Ardea in sail

I look up into the rigging: the single mast is over 15 metres tall. Sun shines on mast hoops made from ash, and our red banner flies in the wind.

This boat belongs here, is built from this landscape by men who knew it intimately

We stop for lunch in a secluded bay, a place of dark water and fallen trees. All is quiet as we eat, locked in the peace of this spot, and then a cry goes up: “Otter!”

I scramble across the deck, binoculars in hand, in time to see the curve of a back and a line of bubbles as the otter disappears. We chart its progress beneath the surface, fish leaping from the water in fear, a swan arching its wings and guiding its cygnet away. I wait, wishing, having never seen an otter. Beneath the black water, the otter eludes me again.

Later, as we slip past Wroxham Island and head back towards the Bure, Dean pulls open a little door in the well and produces a brass horn. He pipes to let boats in the main channel know we are coming.

As the super cruisers give way I feel a swell of pride to be on board. This boat belongs here, is built from this landscape by men who knew it intimately. It is part of the woods and water in a way the churning vessels bellowing clouds of diesel can never be. It is a privilege, for a short while at least, to spend time in its company.

The trip was provided by Natural Britain, who work in partnership with Wherry Yacht Charter charitable trust and offers two ways of experiencing Norfolk wherries: scheduled day sailings are available most weekends (and some weekdays) between May and September for £49pp. Private skippered charters, cost £420 a day or £950 for a weekend. The wherries vary in size and have a variety of cabins, saloons, toilets and simple showers. Most have a small piano. For details visit natural-britain.com/sail-on-a-wherry-norfolk-broads

More ways to explore on water 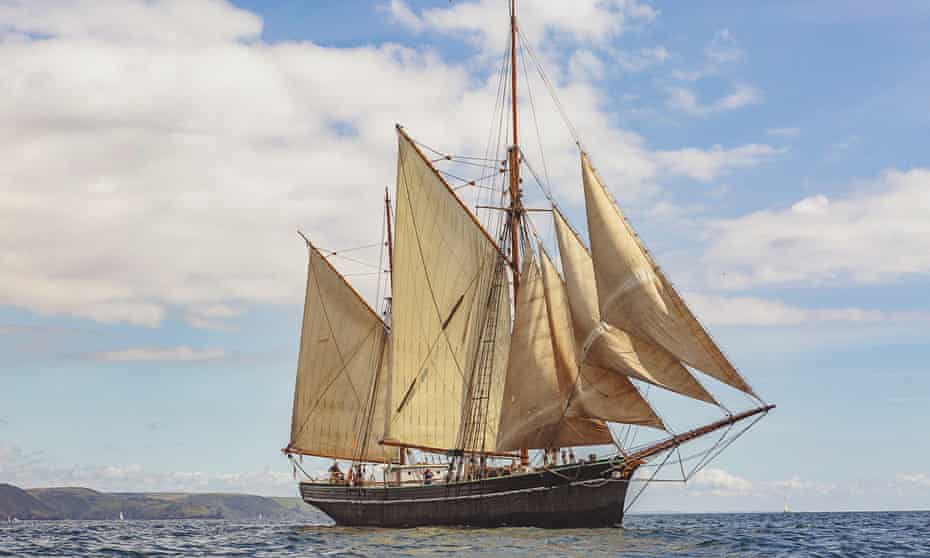 Tall ship sailing, Scotland & Cornwall
Bessie Ellen, built in 1904, is one of the UK’s last wooden ketches (two-masted sailing ships) still under sail. It is now used for sailing holidays in Scotland (10-day voyages in search of orcas around Skye and the Outer Hebrides) and Cornwall (three-day breaks in Helford, Fowey and Falmouth).
From £495 for three nights, bessie-ellen.com 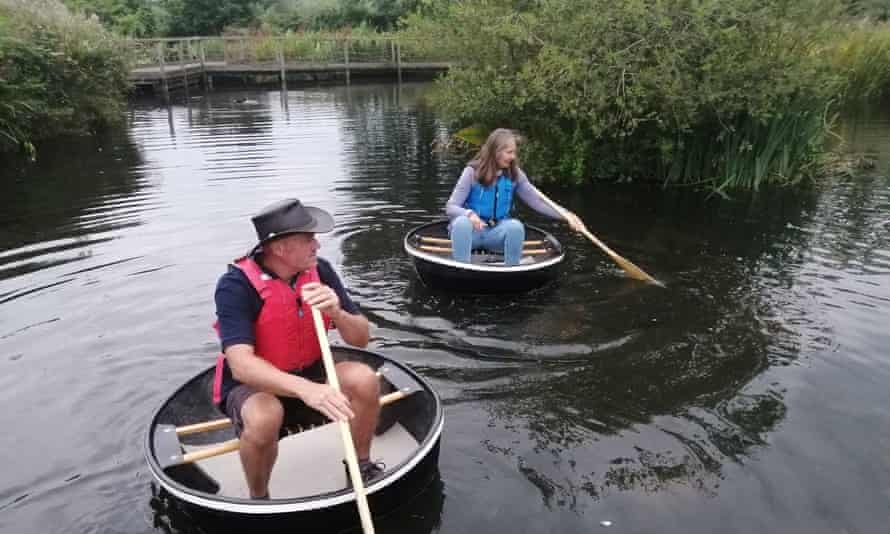 Coracles – light, round, wooden one-person craft (pictured below) – were once a common sight on British rivers. Today, WWT Slimbridge offers short coracle safaris. The boats are notoriously unstable, but once mastered, paddlers can expect to see water voles, warblers and waterfowl.
£10 a boat, wwt.org.uk

Electric narrowboats, Monmouthshire
Castle Narrowboats has two eco-friendly electric boats to explore the 33-mile Monmouthshire and Brecon Canal. Boats can cover 18 miles on a single charge, so don’t need a boost every day.
From £1,145 for seven nights, sleeps four, castlenarrowboats.co.uk