When George and Al’s Mercedes camper van was parked in a quiet corner of their property, deep in the picturesque Wye Valley, it looked like it was on its way to rust heaven.

Having navigated all over Europe and turned up at more festivals than Jo Whiley, the van, nicknamed Cosmo, had been quietly put out to pasture.

It went into retirement when George went off to buy a fridge off eBay.

‘Cosmo was a lovely van, but I went out one day to buy a new fridge and the seller also sold old horse boxes so I ended up coming back with a Bedford lorry horse box instead of a fridge. We turned that into a camper and the Mercedes just ended up sitting on the drive for quite a few years.’

George and Al live in a disused quarry – a slice of green land that took them
two years to find and nine months to persuade the owners to sell.

Surrounded by oak trees, ferns, sycamores and lime trees, with the gentle aroma of wild garlic, their home is an original worker’s cottage.

Trying to escape the burnout that came from being director of a national charity, George was looking for ways to pay the mortgage so she could set up as a freelancer. 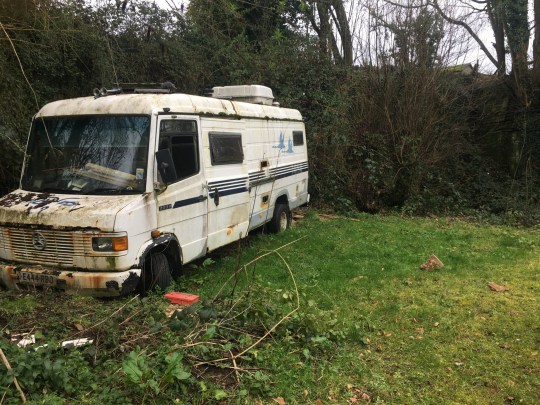 Cosmo was in a seriously bad state before its makeover

By this point, poor Cosmo was gently decaying in the corner of the quarry.

‘It had started first time after years of sitting on the drive and we managed to move it to the edge of the quarry. But it went from being this place where we would spend family holidays to a really rundown van with the door falling off. To be honest, it was quite embarrassing.’

That was when a friend of a friend said the BBC were scouting for potential projects that could be turned into a staycation destination.

After a chat with the producers, it was decided that Cosmo would be the perfect candidate for the ultimate makeover. There was just one catch: it all had to be done in three weeks.

Master craftsman and the show’s presenter Simon Parfett arrived to give the George and Al, as well as a team of friends they had assembled, a vision for the van.

‘It was awful,’ says George. ‘The door fell off in the programme. We had stripped it out to have a go but it was in a poor state. It needed a gargantuan effort to get the project going.’

The first job was to paint over the faded white and 1980s-striped paintwork with a specialist paint – Rust-Oleum CombiColor Original in Water Blue – which made it really stand out among the green, rather than rusting into obscurity.

‘The biggest challenge was the time – three weeks to turn round a complete wreck into something to be lived in. My friend Lucy attempted to jet-wash our quarry walls. We did a side-by-side of her and [Sylvester Stallone] Rambo and you couldn’t tell the difference.’

Almost all the surfaces are covered in pallet wood, but these weren’t the only sustainable touches.

‘We reused loads of stuff and tried to repurpose anything we could,’ explains George. ‘From the van in the bathroom we have got the steering wheel as the towel rail. We made the bathroom light itself out of the rear light. The shaving mirror is one of the old wing mirrors. Oh, and the gearstick is a coat hanger.’

The van’s interior has lots of funky touches, like this fern leaf design

Interior designer Catriona Archer worked on the look of the van, creating a custom table with fern stencil and a similar motif for the exterior. A cedar wood decking creates an outdoor space complete with zingy orange Acapulco Chairs.

This space is fenced off by more reimagined pallets, this time as planters filled with indigenous ferns.

‘I would describe him now as a funky Mercedes,’ says George. ‘It’s quite edgy but also designed to fit into its environment.

‘The colours are amazing. I would have merged it into the garden more but it whacks you in the face now. Then there are a lot of nods to the quarry, a lot of green in there that is natural. It’s eco chic.’ 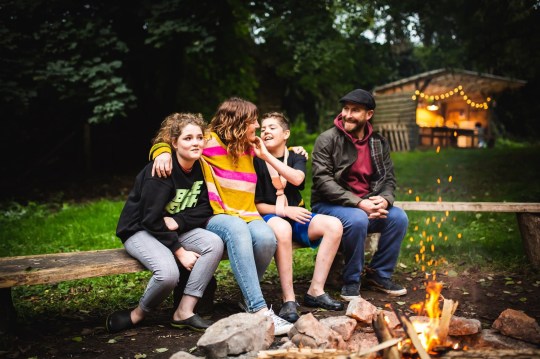 Now that the van is a popular addition to Airbnb, George can realise her dream of being a freelance sustainability consultant. She also uses it as a calming retreat during lockdown if family life gets too hectic.

‘This van helped me change my life. I used to drive three hours a day to Bristol and I got pretty burnt out. It got to the point when I wondered if there must be more to life. Doing Cosmo meant I could be at home more without huge amounts of work.

‘Airbnb suits me, it’s really straightforward. It provides a steady stream of income that pays the mortgage – I now have chickens and I’m at home every day. I now have a balance in my life and part of it is down to Cosmo.’

Have you completed an amazing DIY project?

Get in touch to tell us all about it by emailing [email protected].

What is sickle cell disease and what are the symptoms?

These UK locations that share names with global destinations