Having a dog go missing is one of the most miserable feelings in the world. Whether the doggo ran away, or just got super distracted and inevitably lost along the way, it needless to say causes a lot of distress for both the owner and the dog.

This one woman lost her dog too, until she, plot twist, did some investigative work and found out her beloved bork was not lost, did not run away, but was simply taken from her own yard by a neighbor who assumed he was a stray.

You can guess how furious she was. Enough to share her story on Reddit. And go viral.

So, a 21-year-old woman and proud owner of Mickey, a 12-year-old Akita that she has had for all these twelve years went to Reddit to share a bizarre experience she had.

The woman and her beloved doggie companion live in a gated-off residential neighborhood. Mickey was usually allowed to spend time inside the yard area. Everyone knew about Mickey and who the owner was. 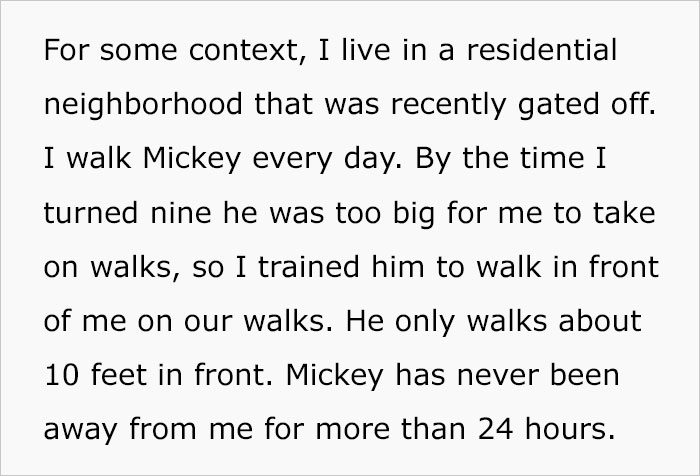 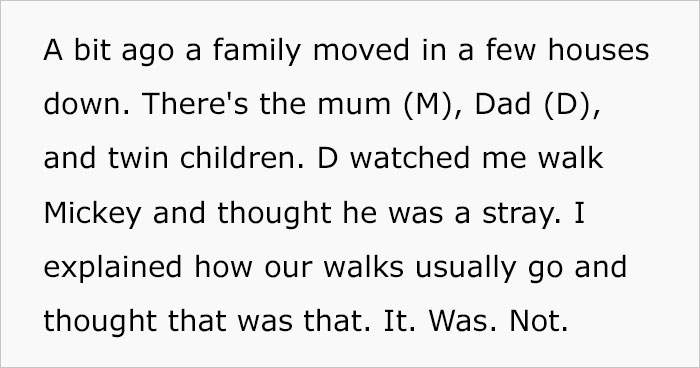 One day, new neighbors moved in and it wasn’t long until the dad saw Mickey and the woman on one of their walks. Because of the way Mickey was trained, he’d walk a bit further away from OP, off a leash, but never run away and would not show any aggression towards anyone.

The dad thought he looked like a stray, but the woman explained that Mickey is in fact her companion and is trained that way. And that was that. 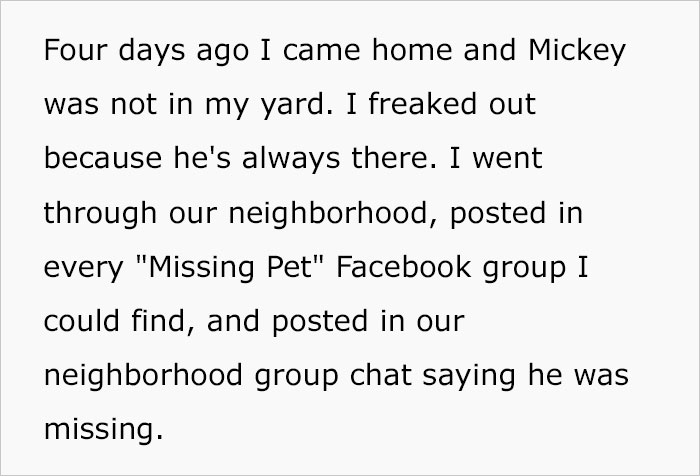 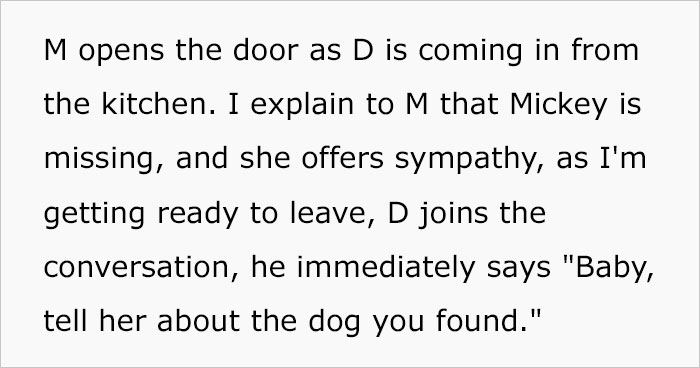 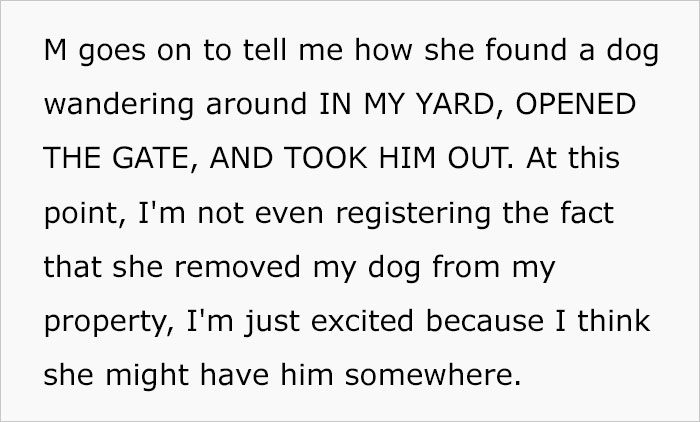 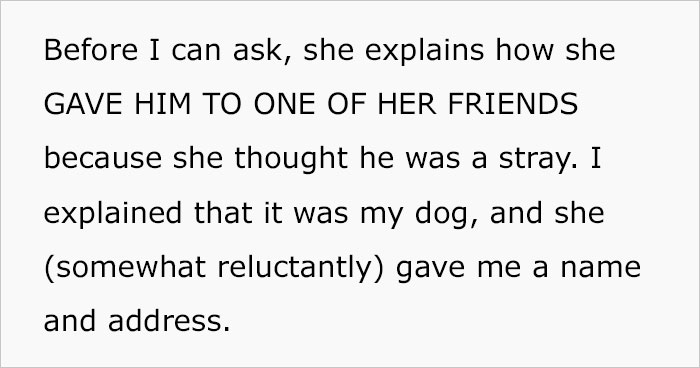 She soon found herself at the doorstep of the new neighbors. The mom opened up the door. OP explained the situation, and the mom expressed her sympathies, when the dad was passing by behind her and said “baby, tell her about the dog you found.”

So, turns out, the mom did in fact see the dog in OP’s backyard, but instead of thinking it was nothing and that it was someone’s dog doing dog things and minding its own business, she decided to open up the gate into somebody else’s yard, entered, and took the dog because it looked like a stray that needed a home.

Through reluctantly, she also said that she had given the dog to a friend of hers. OP was too excited to care about what was effectively theft and she simply dashed down to the friend to collect Mickey. She got there, explained the situation, and without any problems got her dog back. 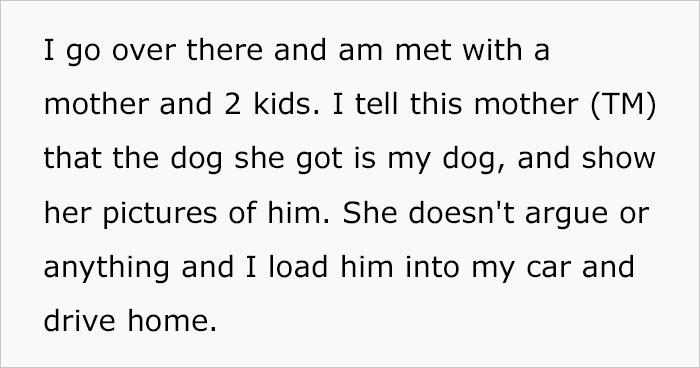 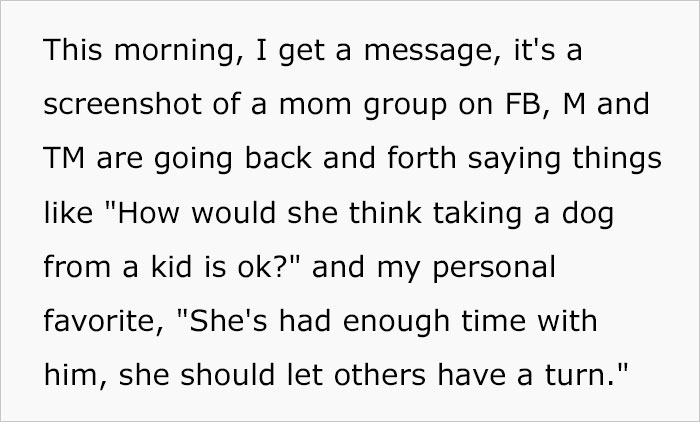 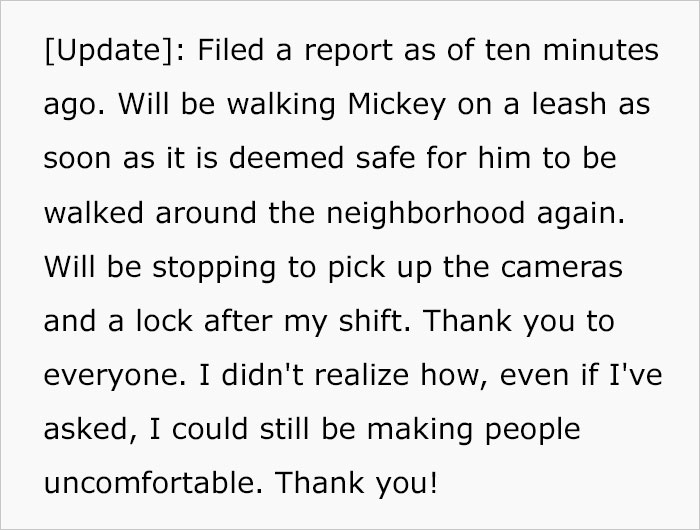 Fast forward to later, OP gets screenshots from the two moms ranting about her, how she dared to take away a dog from a kid and was not willing to let someone else have a turn with the dog. In other words, the women manipulated to story to no end.

Furious, she rushed to the new neighbor and gave her a piece of her mind, explaining how Mickey is not a toy of some sorts and pointing out how they took someone’s dog from someone else’s property. In the end, she was called ‘the bad guy’ for cursing the woman out in front of her kids and causing her emotional stress she’s not fit to deal with.

The woman’s original post prompted a lot of questions from folks, leading to another huge update post 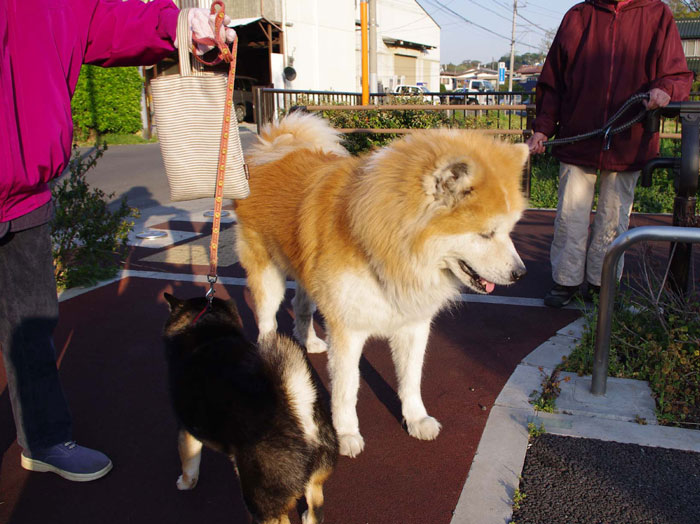 And the AITA audience was torn about this one. On one side, we had everyone siding with the dog owner, saying that what the neighbor did was openly steal her dog and give it to someone. This alone is reason for a police report, but there were those who view this sort of behavior as simply insane.

However, on the other side, where were those who claimed everyone is at fault here. The reasons are more or less the same for the thief, but OP was also blamed for not having chipped the pooch, as well as not having it on a leash as Akitas may be very defensive of their owners and could attack someone. 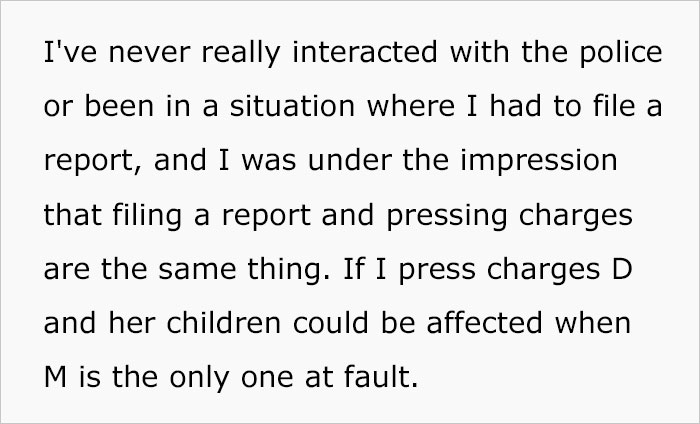 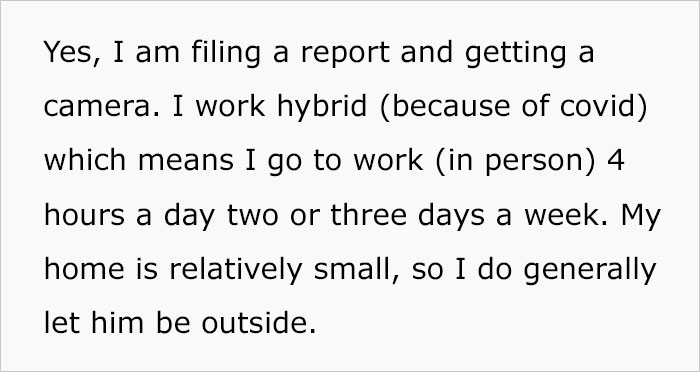 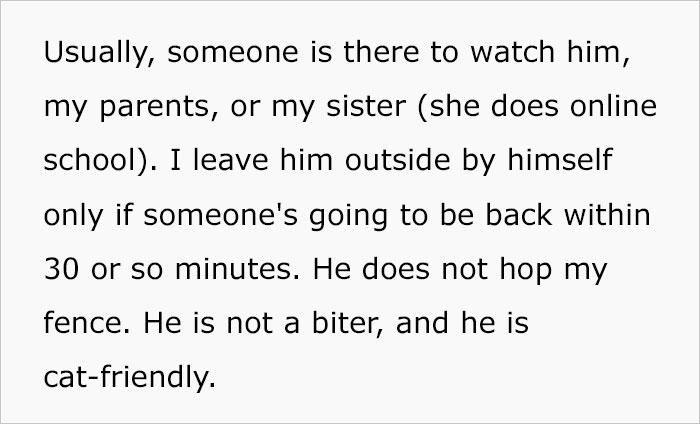 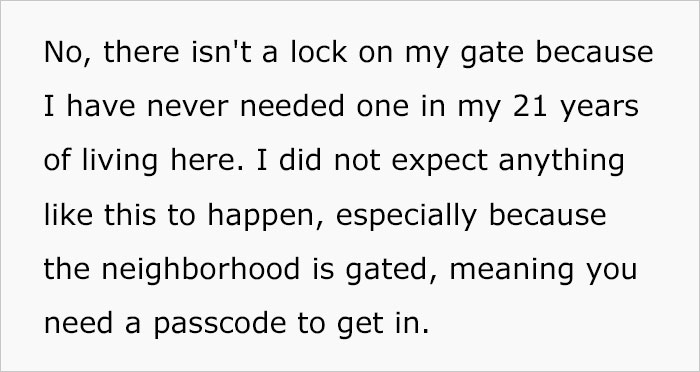 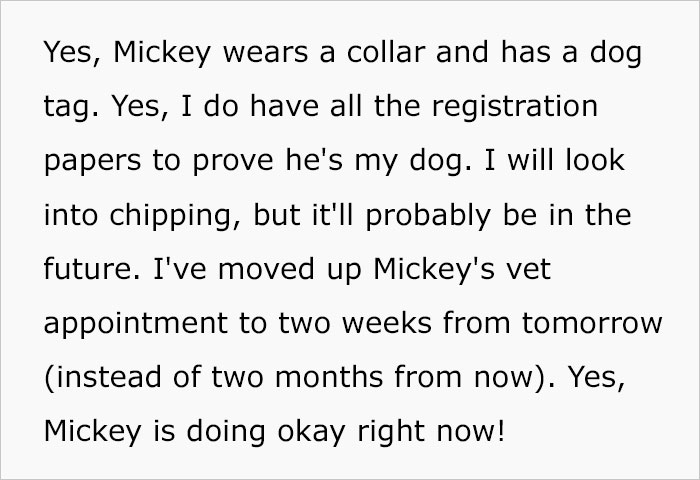 Regardless, it all turned out for the best as OP gave a huge update, clarifying the situation even further and the community seemed to help her make the decision to go with a police report on her neighbor. This is besides deciding to get Mickey chipped, getting a leash and listening to other recommendations.

The community had mixed feelings, with one side supporting her, and the other—thinking everyone’s at fault here 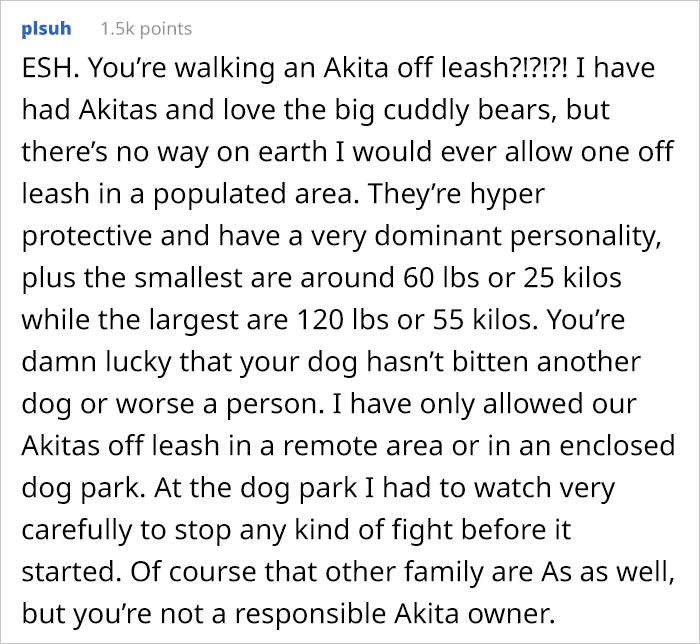 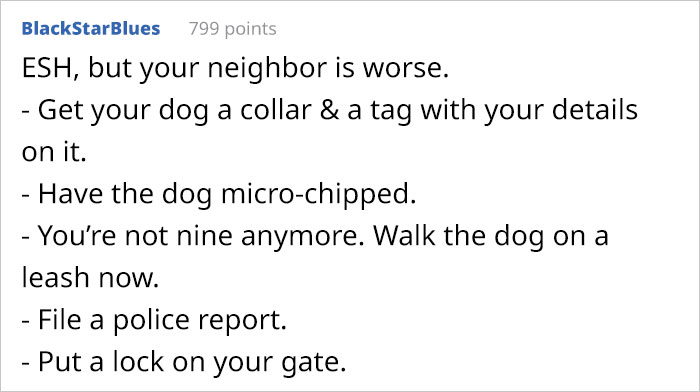 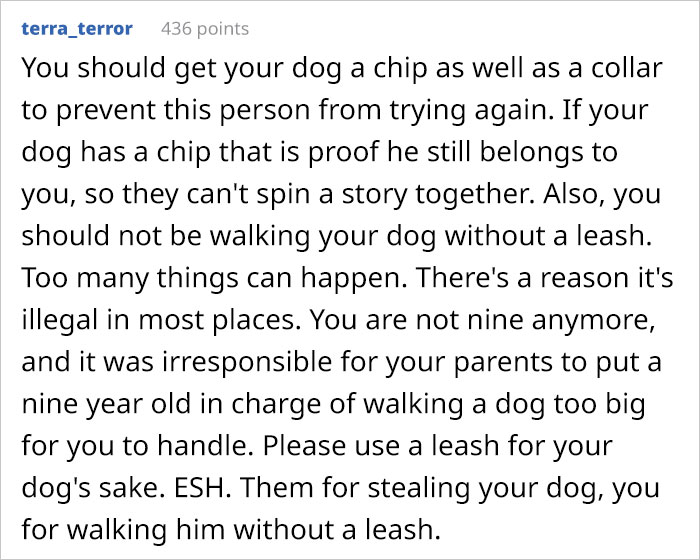 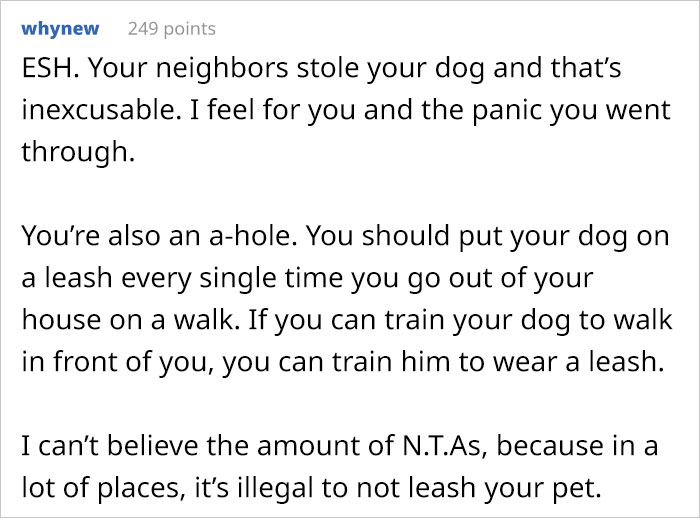 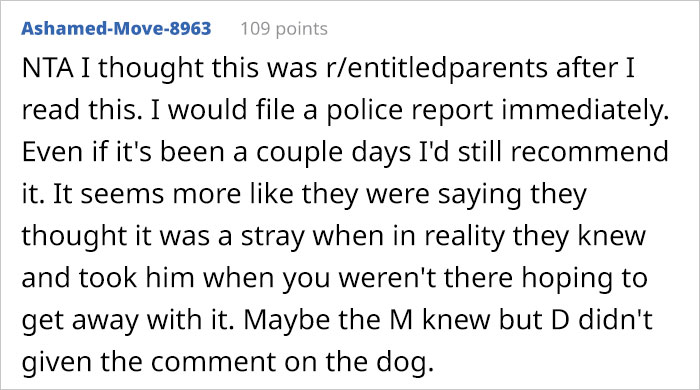 The post, which you can check out in its entirety here and here, garnered over 11,000 upvotes collectively and gained 30 Reddit awards, generating over 1,300 comments of discussions and verdicts. But we’d like to hear your thoughts on this in the comment section below!

If you’ve made it this far into the article, here’s a doggo tax, courtesy of E L 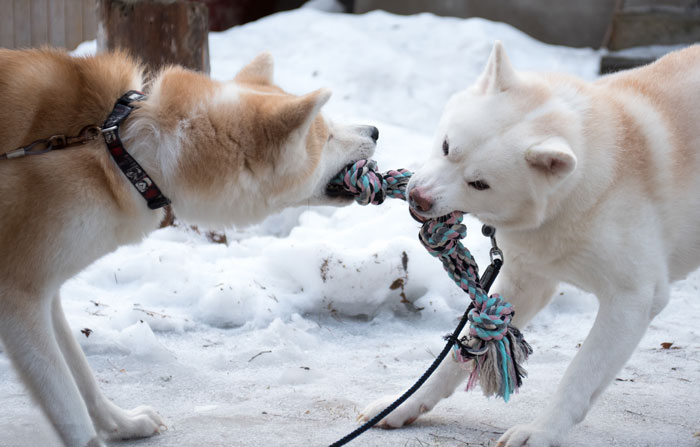 What is The Bay on ITV about?