When the country first went into lockdown, I – reluctantly – reloaded my dating app. With the world on pause and friends navigating the choppy waters of home schooling, I needed something to pass the time. I had never had much luck with the apps but, this time, I connected with Bart, a Dutch PR manager who lived in Windsor. To begin with, I assumed our conversation would follow the same pattern as most of my chats on the apps – last a few days, then fizzle out. To my surprise, this time was different. Instead of ending in the great bin-fire of Hinge matches lost, a friendship grew. We began to have regular Zoom cinema nights – watching the same film online and chatting about it afterwards. As we got to know each other, I began to notice how kind and thoughtful he was, and I appreciated his interest in my life. Slowly I found myself opening up, something that had not happened for years.

Before the world turned upside down, I was happy with my single life. I have never wanted children, and spent my time with friends, occasionally dipping my toes into the murky pool of online dating. The process was always the same. Dates lasted an hour or two, before I would slink off home to catch up on Love Island. Every few years I would find that elusive spark but it was always with a charismatic, gym-honed banker who would allude to a string of heartbroken ex-girlfriends and send me aubergine emojis at 3am. I knew this penchant for unavailable men was unhealthy, but despite my efforts, I somehow never managed – or bothered – to break the cycle.

At 35, I had been single most of my adult life and come to accept that love probably wasn’t for me. Yet suddenly I had time on my hands and few distractions – except for the apocalyptic headlines. That may be why, for the first time, I did not write off this “match” when he didn’t tick the arbitrary list of “boyfriend check boxes” mapped out in my head.

In June, Bart went back to his home town of Helmond, in the Netherlands, for the summer, but two months later, we agreed to finally meet for a long weekend in a beach town near Rotterdam. I arrived drenched in pesto I had spilled on the journey, but instead of being judgmental, he laughed. It has been 18 months and we are still going strong. He’s the first man who makes me feel comfortable to be myself – which I hadn’t noticed was missing in previous relationships. Lockdown made me realise I had been searching for a unicorn instead of seeing what a real relationship could bring.

I am not the only one. So many people have found their priorities shifting since the pandemic began and changed their lives dramatically: from quitting unsatisfying jobs to swapping the city for the country. With bars, parties and social distractions of single life off limits, it has also prompted a desire for deeper connections in many of us. Another dating app, eHarmony, which helps users to find lasting love, saw a staggering 85% year-on-year increase in registrations from January to June 2020. And according to Hinge, a third of users discovered more about themselves and what they want from a relationship during the pandemic.

Lynn Anderton, 60, a life coach from Wirral, had been single for nine years. The end of her marriage, followed by the breakdown of a subsequent three-year relationship dented her confidence, and it took time to rebuild her self-esteem. Despite a few attempts to date online, she found the apps frustrating and had given up on the idea they would lead to love. Instead, she built a life she enjoyed, and grew comfortable in her own company.

Then came lockdown and suddenly Anderton longed for physical contact and intimacy. “The loneliness really kicked in,” she says. “I quite liked my own space but it was too much during the pandemic. I was able to continue my work with homeless people, which was a blessing. But it was still a lonely time. I missed hugging.”

In the summer she downloaded Tinder and was quickly matched with her current partner. “He had the same outlook on life as I did. It was very important for me to be with someone I could be myself with,” she says. They took things slowly, and fell in love during the winter lockdown. “It has developed over time. When we’re together it’s very comfortable and fun. We just laugh all the time.”

Many people assume that young people find it easier to date and find love, but that is not always the case. Chad Teixeira, 25, a marketing entrepreneur, who lives between London and Portugal, had never had a serious, long-term relationship before the pandemic. He admits he is afraid of dating. “I was cynical about love. It’s so easy to go on Grindr and have one-night stands, I never thought I would need anything more. When people tried to connect, I shut down.”

He had been hurt by a relationship when he was younger and felt that had closed him off to the possibility of love. But in the first lockdown, when casual hook-ups became impossible, he turned to other dating apps to pass the time. Without no-strings sex to distract him, he found himself starting a real conversation with a man for the first time in years. Like me, Teixeira realised he wanted more. “There was a moment where something clicked. Without all the parties and friends and hook-ups, I didn’t really have anything. Suddenly I was craving love.”

As the country opened up, he stayed in touch with his new love interest, but they never managed to meet up. “We both had very busy schedules. I think, deep down, I was still scared too,” he admits. Nevertheless, the two finally met in May 2021, after a year of online romance. “We’ve been inseparable ever since. We built a friendship before we even met and it has blossomed into so much more. I never used to believe in love and now I know it’s real,” Teixeira says.

While online dating continued through the pandemic, people looking to meet someone in real life have found it harder. For frontline worker Dave Williams, 57, from Hertfordshire, finding love seemed impossible. After retraining as a mental health nurse in his 40s, he regularly moved around the country for different jobs, so dating was difficult. He had had several relationships, but none lasted. “I’d always wanted to meet someone but nothing ever worked out. It wasn’t worth the heartache,” he says. “I’d been single for five years and had given up the ghost.” When the UK was in lockdown, he didn’t see anyone except patients and colleagues for months. But in January his work moved him to Hitchin, and when Louise, 51, joined his team as a receptionist, his luck changed.

Williams found excuses to say hello every day, and they bonded over a shared love of Thunderbirds – and tinned sausages with beans. “We had so many random things in common,” he says. “One day in March I clumsily asked her if she’d like to go out. I cooked her a meal – hotdogs and beans – and we’ve never spent a day apart since.”

It was a whirlwind romance. Just a few days after this first date, Louise proposed and they married last week, surrounded by friends, family and colleagues. “At our age, I think you just know when something feels right,” says Louise. “It’s the first time in my life that a relationship has really clicked. It’s an intimacy and connection neither of us have had before. We’re 100% comfortable being ourselves with each other.”

The couple have spent the past few days on their honeymoon, travelling around the north of the UK. Williams loves the way they laugh all the time, and each puts the other first. “It took me a long time to get to this point and I’m so happy we’ve found each other.”

Nyasha Daley, 44, a marketing and creative specialist from Coventry, had also experienced years of heartache before she found love last year. Through counselling and training as a life coach, she learned to focus her energies on her own wellbeing and find happiness within. When her last relationship ended 18 months before the pandemic, she felt she had settled into single life. She dated casually, but wasn’t looking for anything more serious. 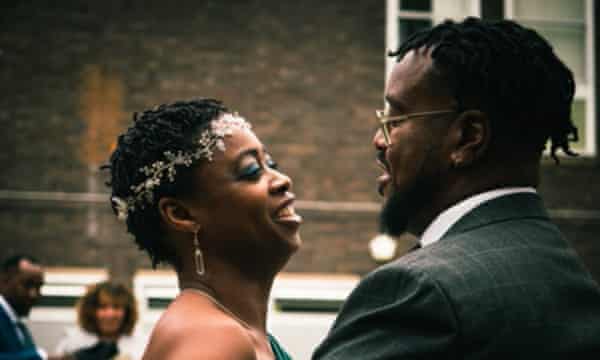 But again something changed when the coronavirus threw everything into sharp relief. As well as the loneliness of lockdown, Daley found the debate around racism sparked by the Black Lives Matter protests challenging to cope with on her own. “It was a hard time to be a Black person,” she says. “It made me realise that although I’d built a happy single life, I didn’t want to be alone for ever.”

She downloaded Bumble in the hope of finding a more serious relationship. But at the same time, she started to re-evaluate what she wanted from a partner. “The BLM protests raised a lot of awareness about Black self-image. I knew that I wanted to meet a partner who would find me attractive in my natural state.” That summer, a friend suggested she look into astrology to help her find a match. “I’ve always been religious but I was very sceptical,” she laughs. “But by that point I was willing to try anything.”

She began to do more research into her own heritage too, and learned about African spirituality. It struck a chord and became an important part of her life. “I realised that some of the things I’d been looking for in a relationship – like money and status – were very superficial,” she says. “Instead I meditated and did daily manifestations to find what I really needed in a partner – someone warm, honest, with a shared sense of spirituality.”

In mid-July she exchanged numbers with Dwain and they chatted on Zoom. “On the first call it was as if I had known him for ever,” says Daley. “He is very spiritual, too, and we talked about star charts, life paths and manifestations on that first call. It turns out he had been looking for me too. Anyone else might have thought I was mental, but he really got me.”

When they met in person they were just as smitten. After getting engaged in December, they married in March in the first wedding after the winter lockdown at Coventry register office. “We had both been on our own journeys of self-discovery. Dwain is kind, funny, talented and strong-willed. He’s everything I asked for and more.”

For Teixeira, Daley and Anderton, difficult lockdowns provided an unexpected opportunity to reflect on what they had been missing, while Williams and Louise believe luck and timing also played a big role in finding love. Before meeting this year, they blamed themselves for their unsuccessful relationships. “There had been so much heartbreak, I just thought it was my fault. I was bad at relationships and wasn’t destined to find love,” says Louise. “Meeting Dave made me realise that it wasn’t me and there is someone out there – some people just wait a bit longer to find the right person.”

My toyboy man might be 15 years younger but he struggles to keep up with ME, says Denise Welch

‘Projectionship’ – a dating habit you might not even realise you have

Do you think with your heart or your head? New optical illusion reveals key personality trait

How I Do It: ‘I’m in a long-distance relationship – here’s how we make sex work’

I was jilted at the altar but decided to carry on with my £12,000 wedding anyway – I had the best time