A WOMAN’S decided to take matters in her own hands after a Tinder match sends her an extremely rude message.

According to Yazmin, who shared the video on TikTok, the 30-year-old man texted her with a ”Hi” – but it’s what followed afterwards that left her speechless.

”Bit larger than I would normally go for,” the message read.

”But fancy meeting for a drink?” the man then had the audacity to ask.

Too stunned by what she had just received, Yazmin decided to resort to drastic measures – after some digging around, the woman managed to successfully track down her Tinder match’s mum on Facebook, where she then sent a screenshot of the short interaction.

”He won’t find anyone this way,” she added.

To her surprise, it wasn’t long until his mum got back to her, claiming his profile had been hacked.

”Having spoken to my son, he seems to have no information about you on his phone and would never be so rude as to send a message like that to anyone!!!

The shocked mum also described him as ”too well brought up to do that”.

She also wasn’t too sure why Yazmin hadn’t solved the issue with him on Tinder.

”I hope you will trust that he would not do this!” the mum tried to insist.

Viewers of the video were left just as speechless as Yazmin, with one writing: ”Red flag 🚩 mummies boy.”

Another person pointed out that something didn’t add up: ”verified but hacked.”

”He really tried negging and then panicked when his mummy found out,” read a comment.

Someone thought: ”the mum is also the problem, not her angel…”

Meanwhile, woman exposes her Tinder match for having a double life from innocent gym selfie – can YOU spot what gave it away?

Plus, this woman has shared the horror story of her Tinder date, after he became rather excited about her attempt at a British accent.

Also, don’t forget to test your relationship with our ‘Divorce Day’ quiz as expert reveals 8 signs your marriage is hitting the rocks. 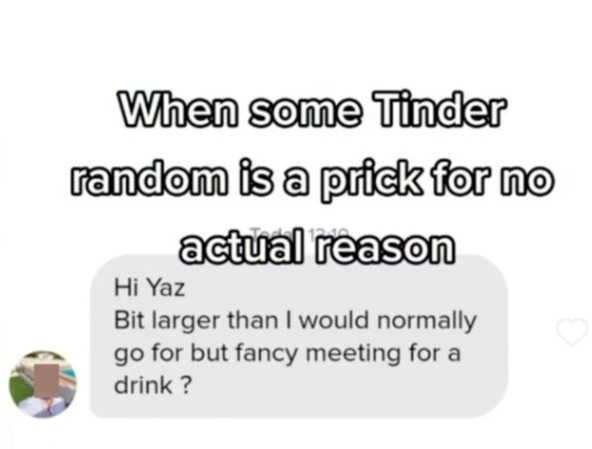 Some of the viewers demanded se exposed the manCredit: @yazminjane/Tiktok 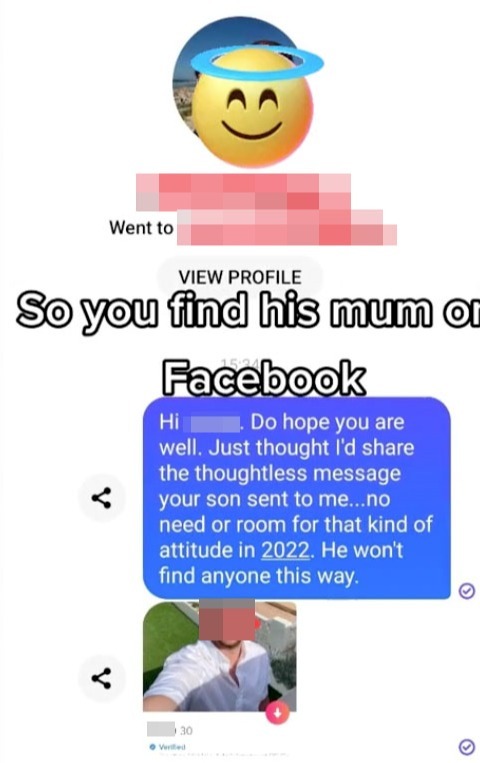 Instead of replying to the rude message, she decided to share it with his mumCredit: @yazminjane/Tiktok