A BRIDE was left fuming after her sister-in-law copied her wedding dress after she shared photos of her “dream” gown.

Taking to the Facebook group That’s It I’m Wedding Shaming (non ban-happy edition), she shared photos of the two dresses she had showed her brother’s fiancee. 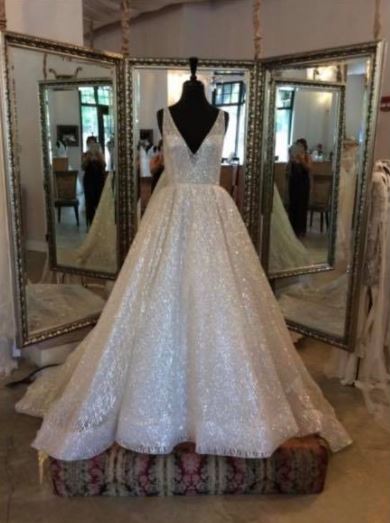 The bride had wanted to wear this dress for her wedding ceremonyCredit: Facebook/That’s It I’m Wedding Shaming 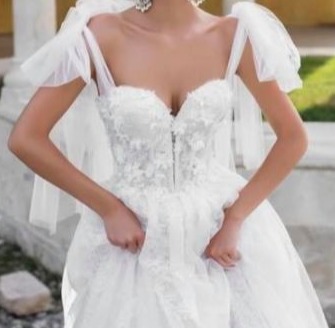 And this as her evening dress Credit: Facebook/That’s It I’m Wedding Shaming

The disgruntled woman then shared a third snap of her sister-in-law’s dress, which was a combination of the two.

She goes on to explain that she and her brother are getting married within the same year, with her brother’s wedding a few months before.

She asked her sister-in-law not to pick a similar dress as she didn’t want to look like she had “copied” her. 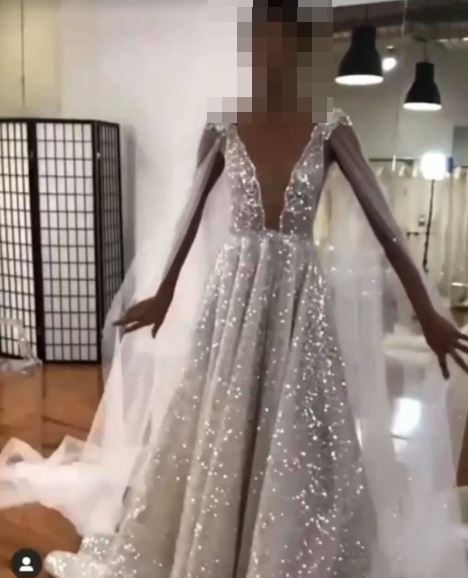 But she was horrified when her sister-in-law “copied” her with a combination of the two gownsCredit: Facebook/That’s It I’m Wedding Shaming

“I sent her a photo of my dresses so she knew exactly what to avoid”, she continues, “I have one for the evening, one for the day.

“She went and asked a designer to make her dream dress. IT’S BOTH OF MY DRESSES COMBINED.”

She adds: “She sent me a photo before of the dress she said she wanted and it’s nothing at all like this dress so she’s had a convenient change of mind.

“I have experienced a new rage today that I did not know existed.”

But while the bride was hoping for sympathy from fellow group members, many agreed that she should “calm down.” 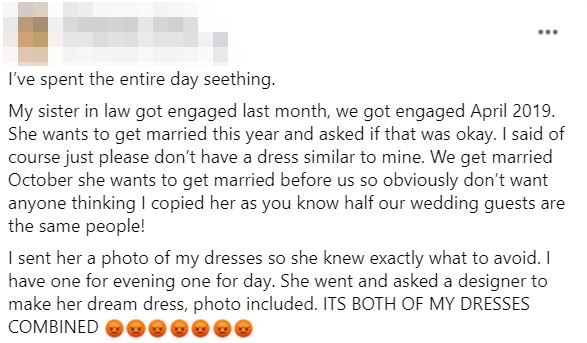 She was left “seething” by the incident Credit: Facebook/That’s It I’m Wedding Shaming

Commenting on the post, one wrote: “Nah. Do not worry I don’t think they look anything alike.

“I mean there’s a similarity in all wedding dresses in a way.”

Agreeing a second added: “In my experience yes people notice a dress for a second but they focus on the bride.”

“Imagine thinking you own a wedding dress style” another bluntly wrote.

In other wedding news, this couple is hunting for the guest who pooed on the floor at their wedding.

And this bride was mocked for glaring error in her wedding pic, but can YOU spot what’s wrong?

Elsewhere, a ‘bride’ brutally mocked for booking her wedding DJ TEN YEARS in advance… and before she even has a bloke.