IT’S no secret that impressing the in-laws can be a difficult task – but that task gets a whole lot harder when your boyfriend’s mum happens to have a list of rules for anyone dating her son.

One woman discovered that her boyfriend’s mum had been making “scary” indirect comments about her on social media. 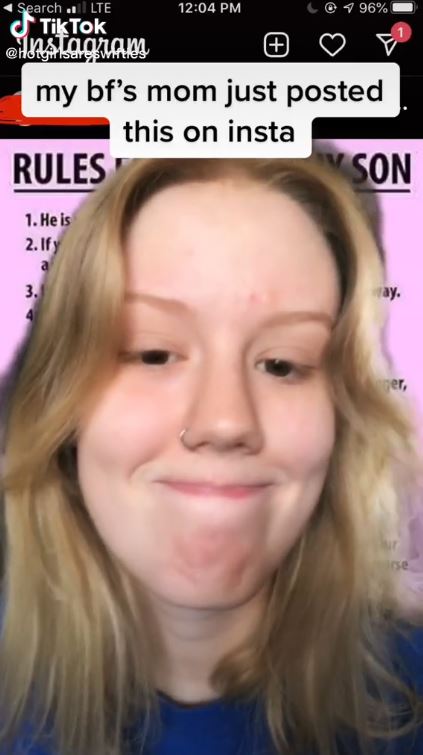 The mum said that the rules apply to anyone “dating my son”.

If anyone dating her son breaks these rules, this protective mum says she could make them “go away”.

“He’s a mama’s boy. Unless you have a ring on your finger, your opinion does not matter”, reads one rule, while a second states: “If you show up at my house looking like a stripper, I will make you go away.” 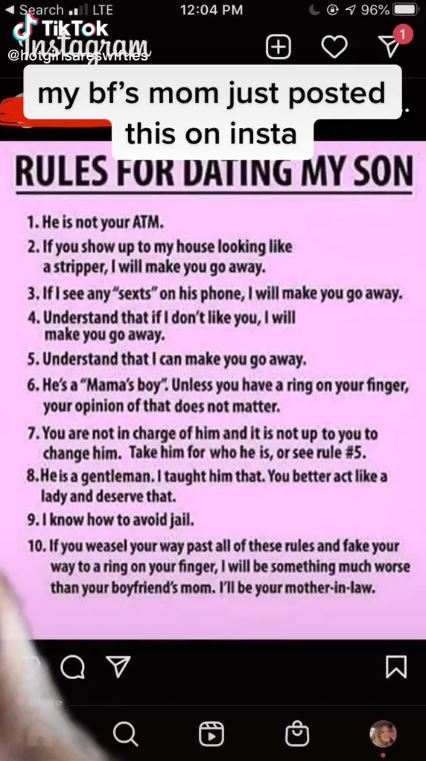 The mum also has strict rules about flirty texting – she says that if she finds any “sexts” on her son’s phone, she won’t stand for it.

The list also includes the statement: “You are not in charge of him and it is not up to you to change him.”

The list goes on: “He is a gentleman, I taught him that. You better act like a lady and deserve that.”

The list also includes the ominous line: “I know how to avoid jail.”

The clip has gone viral, and commenters can’t believe this mum’s attitude to her son’s love life.

“I’m so sorry you have to put up with that, sis”, wrote one sympathetic commenter.

Another said: “Girl, she is definitely going to wear white to your wedding,”

“It only gets worse from here”, wrote one viewer, who urged Emma to end her relationship.

One simply said: “This is so scary girl.”

For more viral stories, this woman was convinced her man was cheating from the contents of his bin… he was mortified when he realised his awkward blunder.

And this woman revealed she’s dating her step-brother after being with his best mate for 7 years – they don’t care if people think it’s weird.

Plus this woman issued a terrifying warning after trendy neon sign set whole flat on fire in just NINE minutes.

Best sex tips and positions for winter: bring the heat when it’s cold out

My mother in law called my baby girl a b***h after babysitting her, I’m furious but my husband isn’t bothered

How I Do It: ‘The lockdowns left me scared to have sex’