ALTHOUGH all eyes are on the bride and groom for their special day, it makes sense that the mothers of the happy couple would want to shine too.

But while most either opt for a statement fascinator or a brightly coloured frock, one mother-in-law has been slammed online after she turned up to her son’s wedding in an almost IDENTICAL bridal dress. 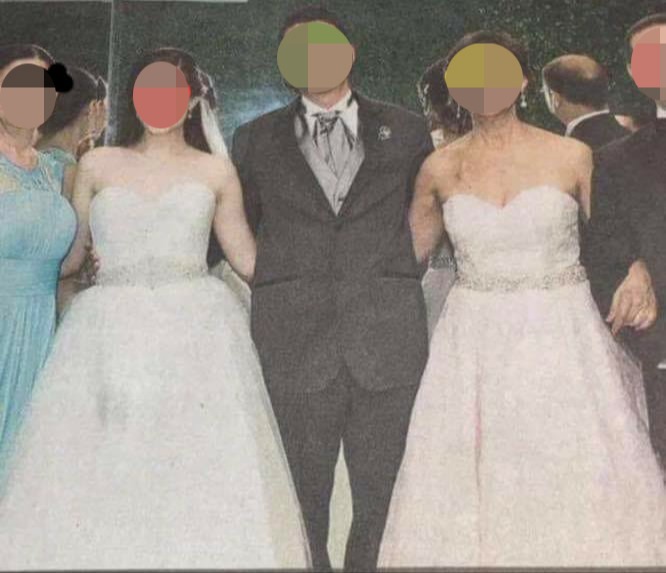 The mother-of-the-groom wore an almost identical dress to the brideCredit: Facebook

The viral photo reportedly first appeared in a local Mexican newspaper and was then shared on the Facebook group That’s It, I’m Wedding Shaming.

In the picture, the groom has his arms around his new bride -who looks sensational in a strapless white lace gown with silver sparkly belt.

On his right side, the groom’s mother is pictured wearing what looks like a carbon copy of the floor-length white lace gown – which even has silver rhinestones on the bodice too.

But on the plus side, at least she wasn’t wearing a veil…

This tells you everything you need to know about his family. Girl, run.

After spotting the picture in the section of the paper “where the rich like to brag about their expensive parties”, the Facebook user jokingly captioned the photo: “When your mother-in-law hates you.”

One wrote: “To get an exact copy of the dress though? Big yikes.”

Another added: “Why do mother-in-laws want to look like the bride so bad? It’s really creepy.”

Meanwhile, a third replied: “I thought it was a double wedding. Horrified!”

For more wedding fails, this bride-to-be was stunned by guest’s ‘rude’ RSVP – but some think he was in the right.

Who are Travis Barkers ex-wives?

“This is pop girl shit but I’m not pop”