WHEN Kim met her bloke on a dating app three years ago, she had no idea he’d end up being “the one” – or that she’d have to fight his mum for some alone time with her man.

Appearing on the season premiere of I Love A Mama’s Boy, Kim, 26, admits her soon-to-be husband Matt, 29, is extremely close with his mum, Kelly, but it’s putting a massive strain on their relationship. 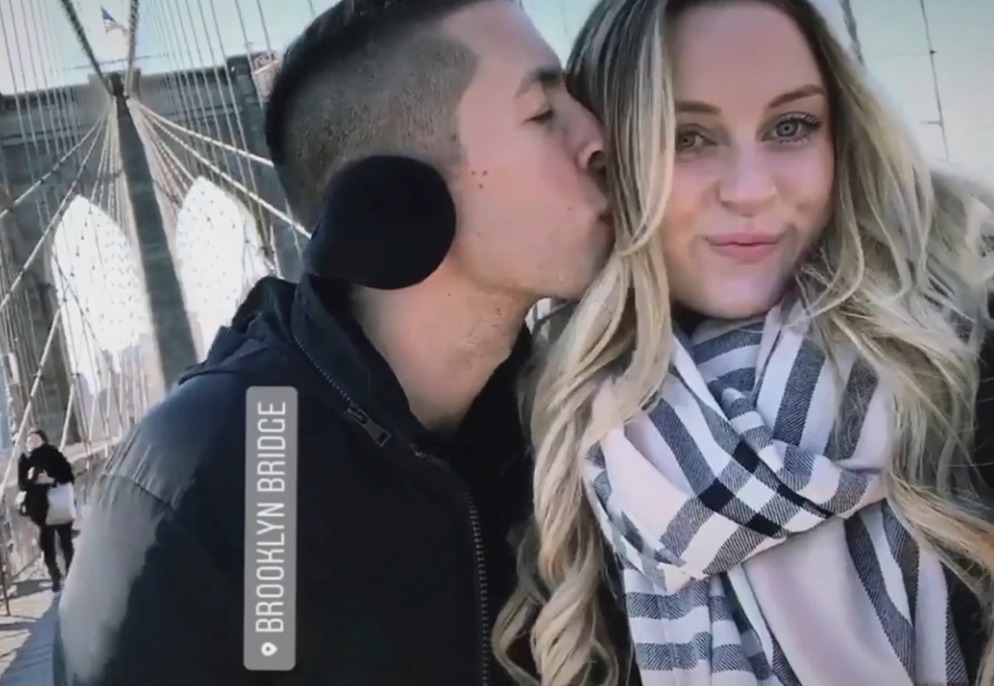 Kim, 26, says Matt, 29 is too much of a mummy’s boy and has been trying to prise him away from his coddling mum

It all started when the couple moved in with Kelly a year ago, after a fire broke out in their apartment building – leaving them with no place to live.

Realising how much of a “mummy’s boy” he was, Kim has been trying to prise Matt away from his coddling mother ever since – and it hasn’t been an easy task.

Speaking on the show, she says: “I don’t want his mum to be his number one. It’s just a lot more challenging than I initially thought it would be.

“It’s not an ideal living situation because Matt is a total mama’s boy.”

She explains: “Kelly and Matt are always planning something, whether it’s pedicures or their next vacation; I’m totally the third wheel with them! 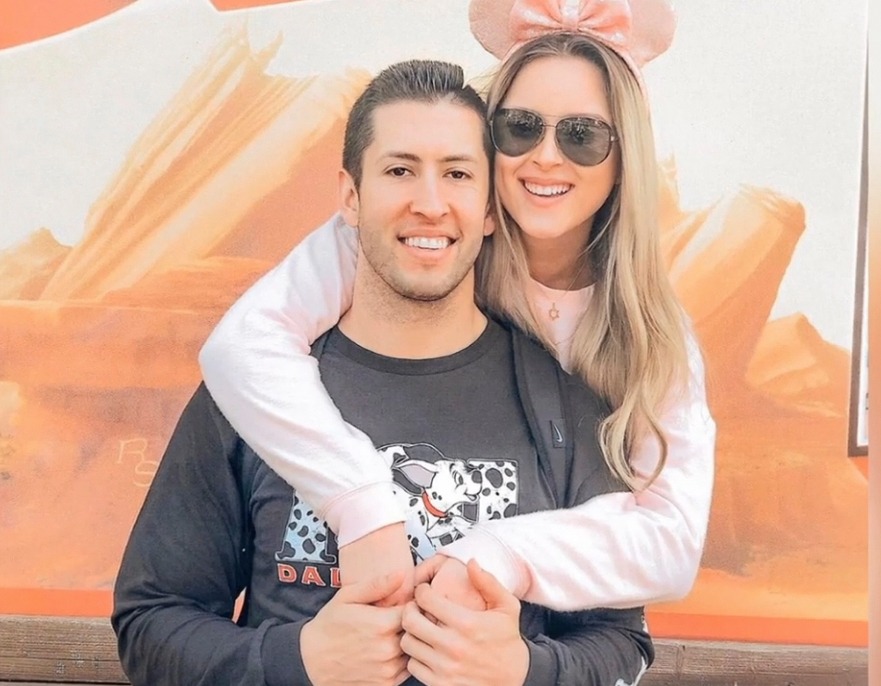 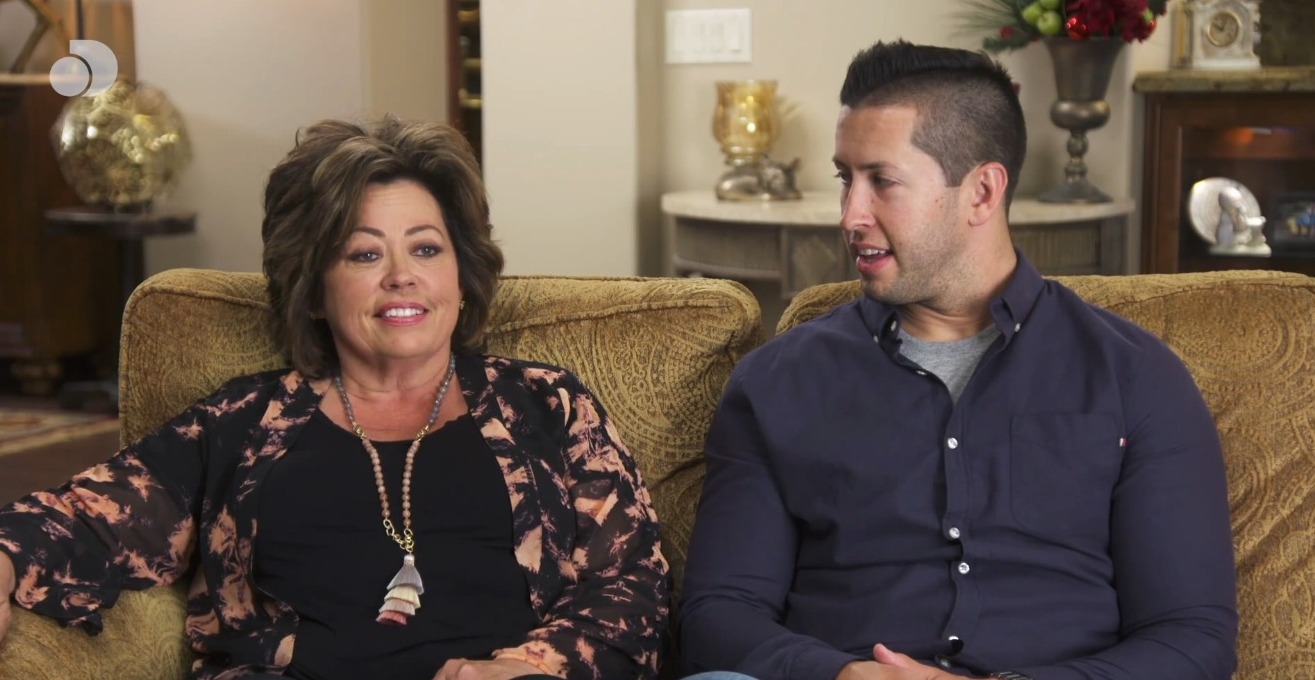 Matt’s mum Kelly says she like Kim but insists she should remain number one – even once they’re marriedCredit: Discovery

“Instead of us going out for a date night, he’d rather hang out on the couch drinking his sleepy time tea with his mum.”

The closeness of the pair has even caused issues in the bedroom, with Kim and Matt barely having time alone to have sex.

With talk about marriage and taking their relationship to the next level, Matt knows he has to spice things up a little in the bedroom, and heads out to buy Kim some sexy lingerie.

However, what would normally be a bloke’s worst night mare is Matt’s saving grace when he asks his mum to help pick out the perfect garment for his soon-to-be fiance. 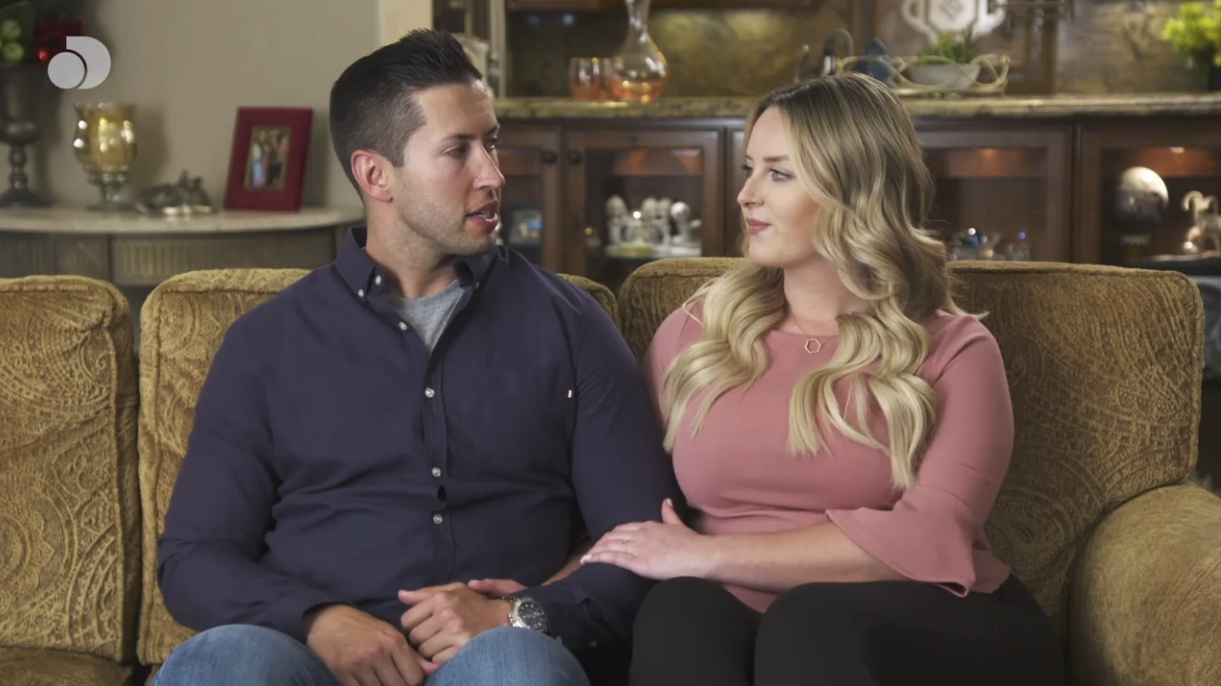 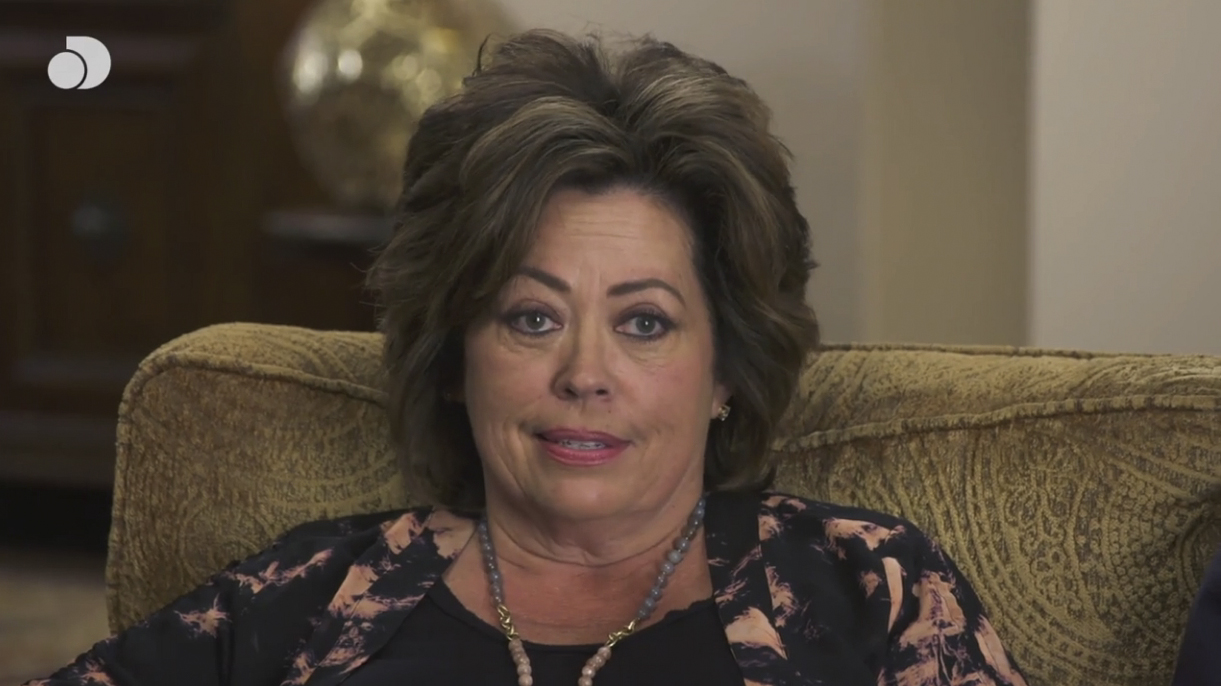 Speaking on the show, Matt says: “For Valentine’s Day this year, mum said she would go and help me get Kim a gift. I want to put a little bit of spark back into my and Kim’s relationship.

“There is some intimacy that has fallen short because we do live with my mum and she [Kim] thinks that my mum sometimes around a little bit too much.

“If I ask my mum her opinion, I’m going to get a for sure guarantee of a good response!”

Kelly’s help proved to be useful, too useful in fact, as Matt ended up buying his mum the EXACT same thing – much to the dismay of the very confused shop owner.

Filing through the lingerie shop’s hangers, Matt picks out a selection of underwear for his mum to comment on, gauging what she thinks Kim will like. 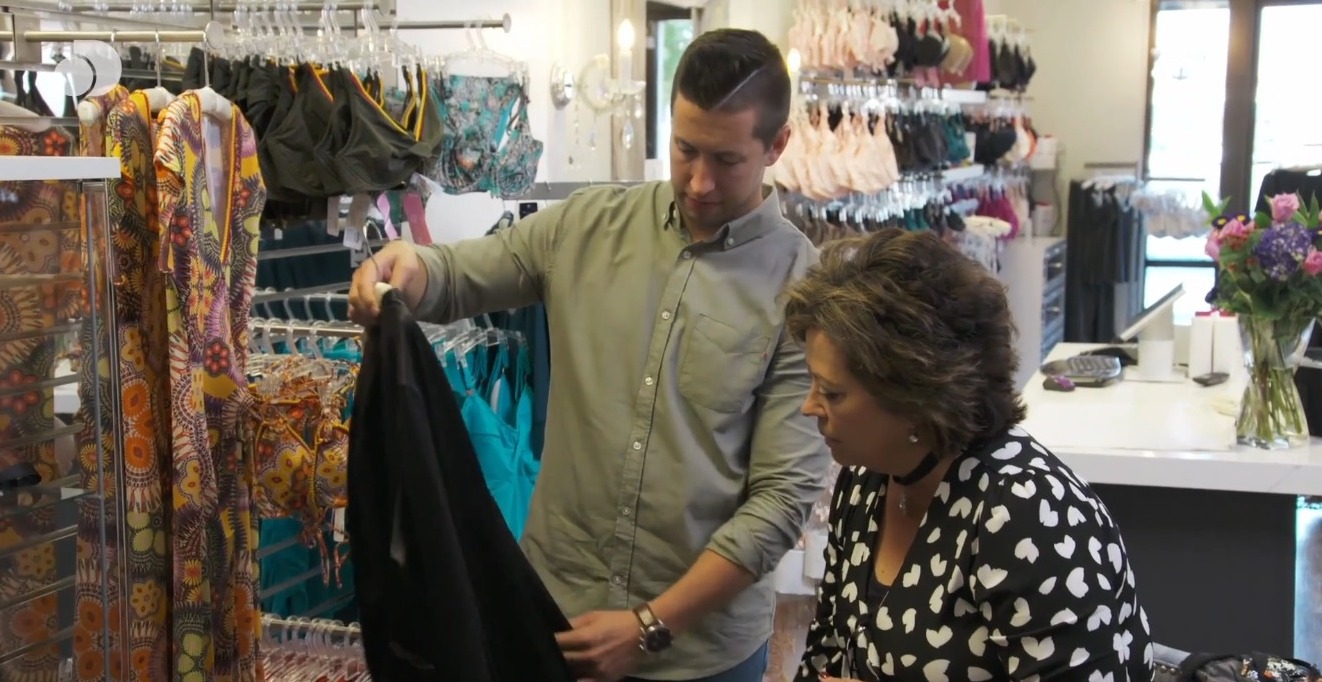 Matt takes his mum shopping to buy lingerie for Kim, in a bid to spice things up in the bedroomCredit: Discovery 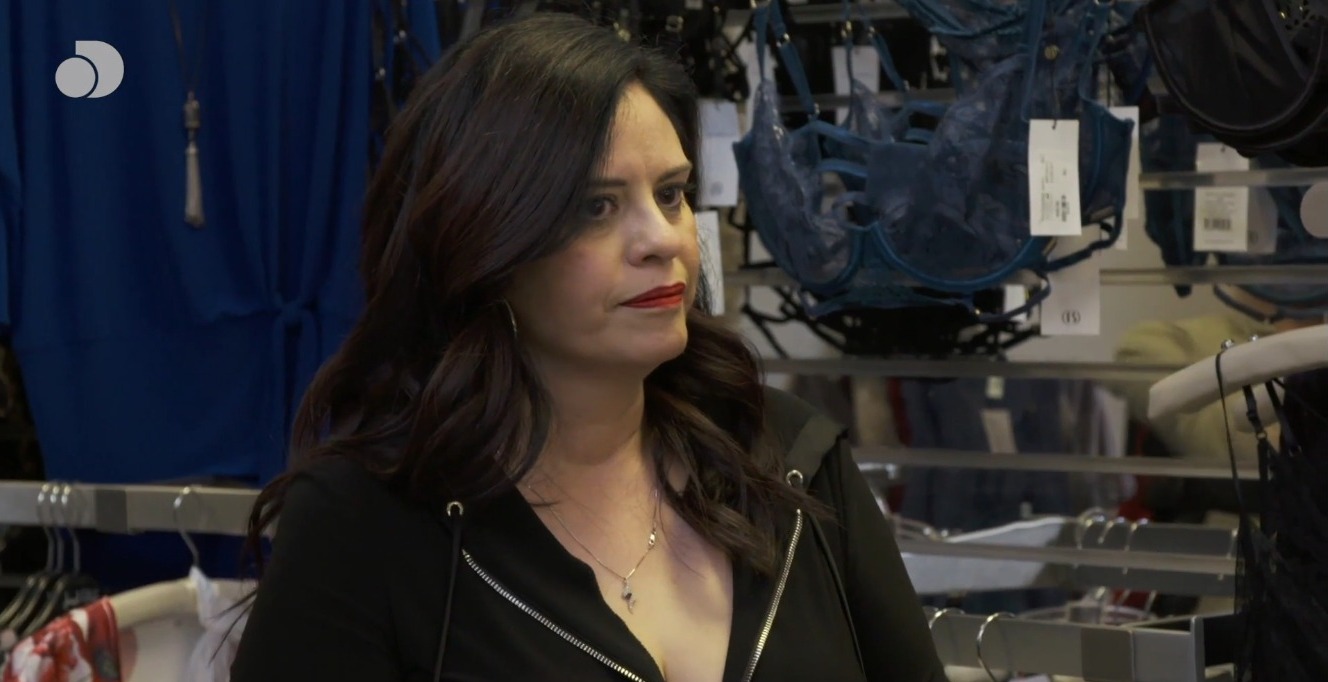 Shop owner Yve is shocked Matt brought is mother along, and tries to help find the perfect garmentCredit: Discovery

Remarking on one skimpy one-piece, Kelly says: “That is certainly spicy.”

Yve, the store’s owner approached the pair when Kelly confidently explains what they are looking for – leaving Yve cringing in horror.

“My son wants to get something beautiful for his girlfriend with a little bit of razzle dazzle for Valentine’s Day,” she says.

Ever the professional, Yve pushes past the palpable awkwardness of the situation and helps the pair pick out of a few options – a saucy leopard print number and a revealing ribbon two-piece.

I would love that. I’m kind of her size, I can see me wearing that too

Having found one she likes, Kelly says: “I do like the cheetah, I think it’s beautiful. It’s spicy, elegant, so I don’t think we’ll have any problems.”

Trying to keep a straight face, Yve admits  “I’ve been in business for 13 years, and I do not have a lot of mothers and sons shopping for lingerie in my store. That’s really weird to me.”

Matt’s attention is soon drawn to a sexy, silky bathrobe completing the look for Kim, and comments: “Oh that’s nice, she would love that.”

Without missing a beat, Kelly chimes in, saying “I would love that. I’m kind of her size, I can see me wearing that too.” 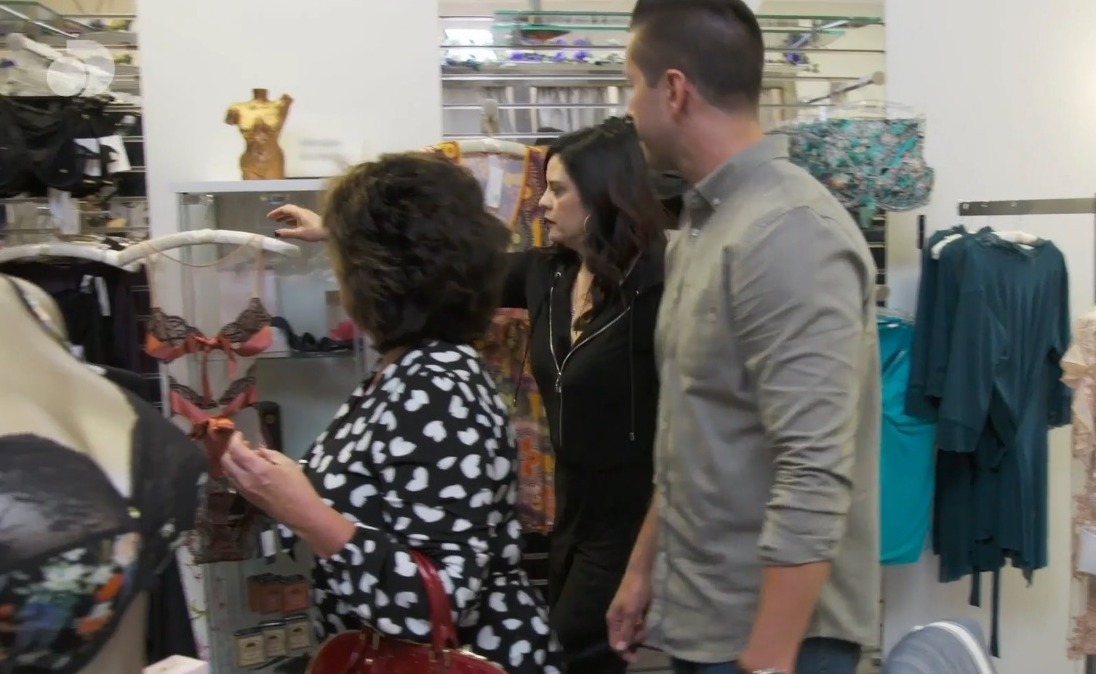 Kelly compliments some of the choices, even saying she’d like some too – to Matt buy the item for Kim and his mum Credit: Discovery

Shockingly, Matt decides to buy two of the same bathrobe – one for his girlfriend Kim, and one for his mum Kelly.

And if Kim thought there were issues before, she’s in for a shock – even Yve reckons it’ll cause some problems.

While waiting for his three purchases to be gift wrapped, Matt takes the opportunity to express his commitment to Kelly to his mum, admitting he’s thinking of popping the question.

Assuming she has a say in the matter, she asks: “I think we can think about it. When’s it going to happen?” 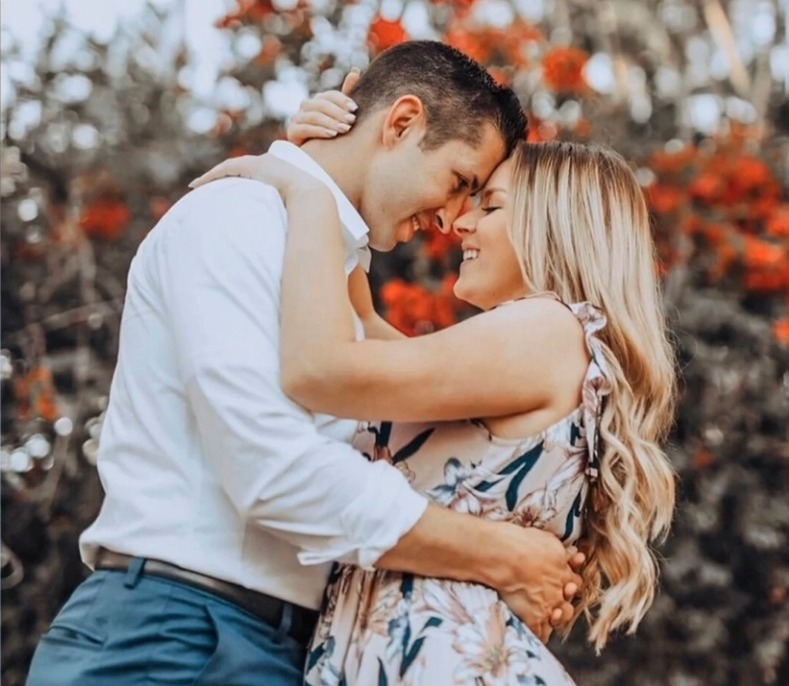 To which Matt responds: “I mean, fairly soon. I’ve been thinking of looking at rings. Kim found a ring at Tiffany’s that she likes,”

While she admits she thinks Matt and Kim are perfect for each other, Kelly is quick to reiterate that she is his number one priority, and that she plans to keep it that way.

“I think they make a great couple, and I like Kim and I want my son to be happy,” she says. “But in life there is a hierarchy, and I’m right at the top.”

Meanwhile, a woman shares epic Tinder fail after date made her sit through meal with his MUM & was questioned about her ‘intentions’.

For more dating horror stories, this lad ‘tired of being single’ was called ‘evil’ for revealing plan to split up his loved-up mates and their girlfriends.