A WOMAN has made the promise to never give out her number again, after a bizarre dating fail leaves her phone with rude messages.

Amelia Jackie, from New York, shared the story time on TikTok, where the three minute video has racked up almost 315 thousand views.

Looking back at it now, Amelia said she should’ve blocked him after he attempted to FaceTime herCredit: @itsameliyaaas/Tiktok

According to the make-up artist, this took place around two months ago when Amelia wasn’t familiar with creating TikTok videos.

”But now I’m here and I must share it.

”Basically, I met this guy at this taco truck, I gave him my number because he left his card.”

After swapping with numbers – the two seemed to hit if off quite well – they agreed to meet up for a date.

However, she told, things didn’t quite go as planned: ”It was bizarre, he was just like super weird and not it for me.

”He tried to FaceTime me randomly and I was like ‘I don’t want to do that’.”

After ghosting the guy for two days in hopes that he would leave her alone, Amelia then received a text message one morning.

”Dang I didn’t hear from u at all last two days I’m guessing thought our date sucked? Lol,” the newly-acquired beau had sent.

A few moments later, Amelie then responded explaining she had been busy but also added that she didn’t feel it was a good match between the two.

”I hope you understand and take care,” the make-up artist added.

The following screenshots, which have been liked by over 28 thousand people on TikTok, then revealed the man asking for a more detailed explanation, claiming the feedback would be valuable for his future dates.

”Just out of curiosity what did I do wrong was I too weird or was it my age?”

However, within moments, the tone suddenly changed – Amelia, who couldn’t reply immediately due to work commitments, suddenly came back to her phone bombarded with rude messages.

”Sigh…u know what it’s ok ur the one giving out your f*****g number anyway (no girl does that!) I accepted ur number to give u a chance because u seemed nice.

”but I didn’t do anything wrong to u plus u do freelancing w no direction…” the infuriated man had written.

”Ten minutes I didn’t respond and this man’s ego is so hurt,” Amelia said.

”My intuition picked up on this side of you,” she responded, adding she hoped he would heal.

It appeared that the bloke couldn’t quite digest rejection, as he proceeded to say that Amelia had wasted his time, explaining ”that s**t is annoying”.

”U the one that came up to me f**k out here I was minding my business didn’t say s**t to you.

”No girl asks for a guys number any motherf****r will tell u that.”

After a string of what she called ”psycho messages”, Amelia went on to block the number.

”Tinder nightmares? This is crazy.”

One viewer thought: ”Any guy who thinks women ‘don’t give out their numbers’ as a grown adult is a red flag.”

Another was confused about his outburst: ”Lmao the point of the date is to find out if you’re compatible?? What did he expect.”

”do men not understand the concept of a first date?” someone else agreed.

”its to see if you two are a good match/vibe &want to see eachother more. we are allowed to change.”

One of the users joked and said: ”there’s a 90% chance he is gonna send you a “hey” text like a month later.”

In other relationship news, a woman was left stunned after a very odd dating experience in which things went from bad to worse in a matter of hours.

Meanwhile, this woman shuts down her Tinder match in seconds by replying with the WRONG voice note by mistake.

Also, a woman shares her extensive list of rules for ‘first dates’ that men need to follow, including height minimum & who pays. 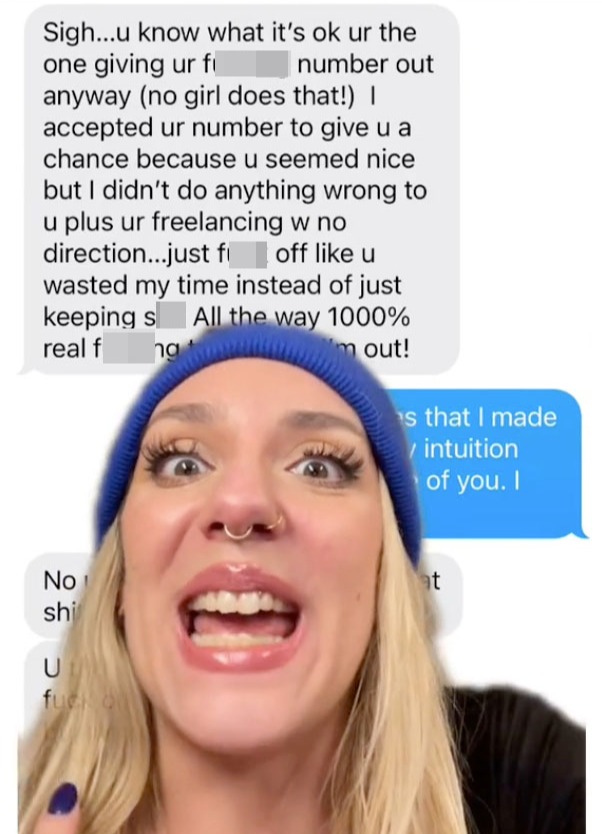 The text message she received after not being able to reply within ten minutesCredit: @itsameliyaaas/Tiktok 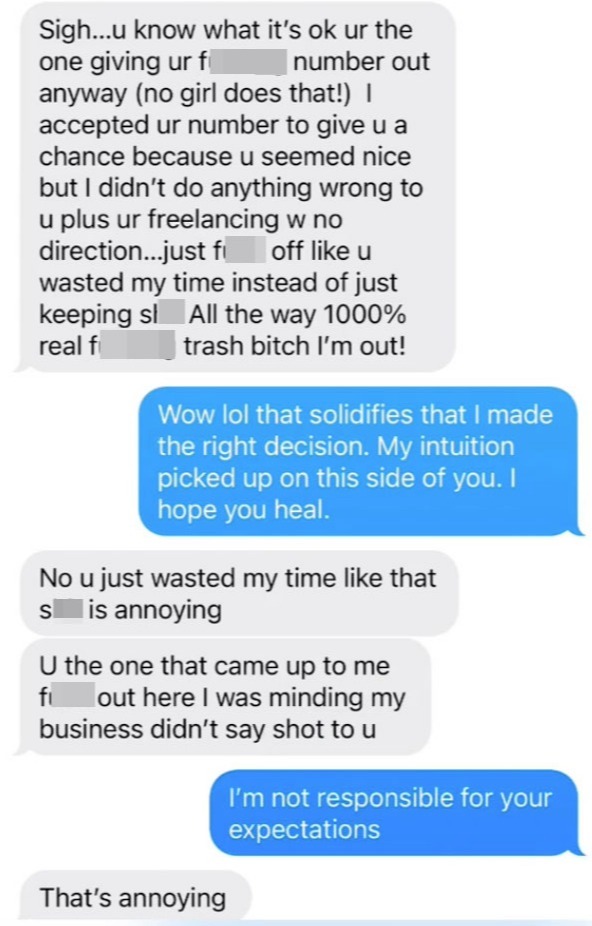 The make-up artist believed the man’s ego had been hurtCredit: @itsameliyaaas/Tiktok