I went on a date

FIRST dates are all about leaving a good impression – from head to toe, we will sometimes even spend hours trying to put together the perfect outfit.

This is exactly what happened to this TikTok user – but little did she know the clothes would start to disintegrate a couple of hours in the date.

The mortified woman added that she had been wearing the trousers for yearsCredit: @try_fourplay/Tiktok

The fashion mishap, shared by @try_fourplay, is so hilarious that it’s racked up almost two million views on the social media giant.

After returning home from a date, this woman was horrified when she realised the leather trousers she had been wearing all along had began to shred.

Although the front part wasn’t so bad, the back of them had long leather straps hanging from almost everywhere.

”What’s happening?” the mortified date-goer was wondering, as she was grabbing the pieces and demonstrating the destroyed trousers to the audience.

Although many viewers insisted she revealed where she had purchased them from, the woman, a small business owner herself, said she’d ”pass on that one”, not wanting to ruin the reputation of the brand.

She also revealed that, shockingly, her date didn’t notice the shedding.

”But he might still deserve jail time because after I ended it, he said it’s a shame because he would’ve invested in my business.

”My taste in men is worse than my taste in leather.”

”I thought we all learned from Ross not to wear leather pants on a date,’ a person joked.

Another mortified user commented: ”My aunt went on a job interview and her shoes started disintegrating as she’s walking in.”

”I had a duffel bag like this and it disintegrated mid travel- shed all over the airport and plane, so embarrassing,” was another TikToker’s experience.

”the way i would have immediately passed away when i noticed 😳,” added someone.

”New fear ✨ unlocked ✨,” is how a user felt after watching the video, whilst another added: ”Me immediately removing every pair of leather pants from every cart I have.”

Meanwhile,  this shopper was left in hysterics after ordering a fluffy rug from Shein.

In other fashion news, a woman’s been left mortified after a hilarious fashion mishap leaves her with humongous shoulders.

Plus, a style expert has revealed how you only need nine items of clothes in your wardrobe to always look well-dressed. 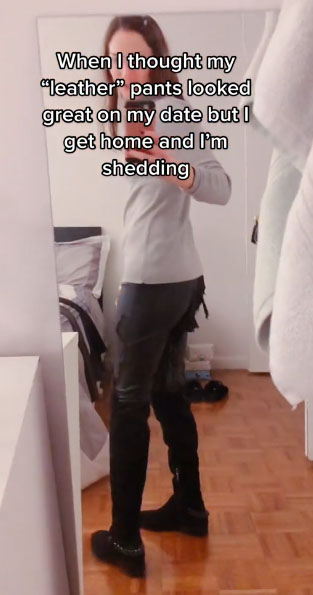 Someone said they would never leave the house again if this had happened to themCredit: @try_fourplay/Tiktok 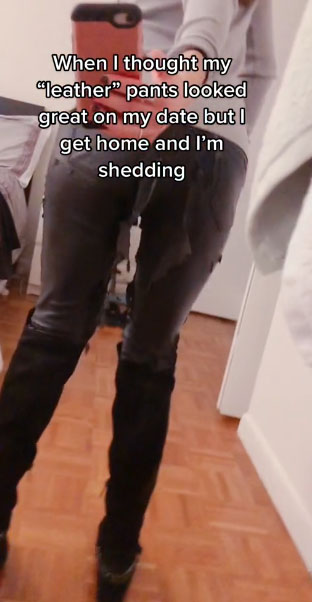 Despite the many requests, she insisted she wouldn’t reveal the brandCredit: @try_fourplay/Tiktok