A WOMAN who started writing to a prisoner during lockdown never thought it would result in the pair of them getting married.

Naomi, 27, from Manchester, signed up for a prisoner pen pal service when her counselling course was cut short during the pandemic, and in June 2020, she started writing to a man in Michigan.

Naomi has opened up about her relationship with a prison inmate, sharing updates on her TikTok accountCredit: @naomiellaoquendo/Tiktok

The man in question is Victor Oquendo, a 31-year-old inmate who is 11 years into a 24-year sentence for double homicide.

After just over a year of correspondence, the pair are now married, and Naomi shares updates about their relationship to her TikTok account naomiellaoquendo.

These updates include snippets of their phone calls and screenshots of their messages.

While Naomi hasn’t yet shared how the pair of them were able to get legally married, she’s opened up about other aspects of the relationship.

The 27-year-old also revealed that she is now planning to move to America to be closer to her husband in prison.

Naomi is regularly asked what Victor did to wind up in prison, so shared a breakdown of his charges.

“Victor was taken into care shortly after being born. he was abused by many foster families and spent the majority of his childhood sleeping on park benches or in abandoned houses,” she said.

“He was a kid that faced adversity in life and didn’t have the social capital and social network resources to absorb the trauma or overcome it.

“He was adopted by his birth mother at seven years old and became her crack dealer.”

She went on to explain that he was ‘exposed to a variety of factors that increase his likelihood of joining a gang’, such as lack of supervision, poverty and being from a gang-affiliated family.

“At the age of 18 years old, he was making an exchange when the other party of five grown men open fire at him. He shot back, resulting in a double homicide and illegal firearms charge,” Naomi went on to say.

“He was afraid and scared so took shelter in someone else’s home. When found in someone’s home it resulted in a home invasion charge added to his sentence.

“American gang-affiliated children are more likely to be imprisoned no matter the circumstances when they’re victims of the system. The US juvenile justice system imposes unfair sentencing on youth who are in the most need of protection.”

Naomi explained that Michigan does not currently have a good behaviour act for prisons but it is going to go ahead and be voted for in 2022. If successful, it means Victor will be home in 2027.

“If the good behaviour act does not get approved year after year it’s voted for, we have other avenues we’re going to go down which will probably reduce his sentence down to 2027. But with all of that being said, his full sentence is 2034,” she said.

Now Naomi is sharing a petition in hopes to grant Victor clemency, which is a government decision to allow a person to be relieved of some or all of the legal consequences resulting from a criminal conviction.

“I believe Victor should be granted clemency, not only because his case was unjust but he’s also a 30-year-old man now who has learnt from his mistakes and wants to be given a second chance at life,” she said.

“He is extremely remorseful for that act he committed, he has already served 11 years in prison. If the good behaviour act is approved he will serve an extra six or seven on top of that.

Naomi has grown a large following online of almost 100k people in TikTok alone, with many people being supportive of the relationship.

Many followers have also proven to be curious, regularly asking her questions about the relationship.

“Do you not worry that he’s telling you what you want to hear? No hate, just curious! I love watching your videos and wish you all the best,” one person asked.

Naomi responded: “No, but it used to be a worry! He’s shown with his actions he’s being real! And as far as trust goes he would print out any messages women sent him along with his replies turning them away.

“[He would] send me his phone records, his commissary receipts. I’m in contact with his family, his son, son’s mother. So I’m around a lot of his life and want to be involved in everything so a lie would be hard to maintain!” 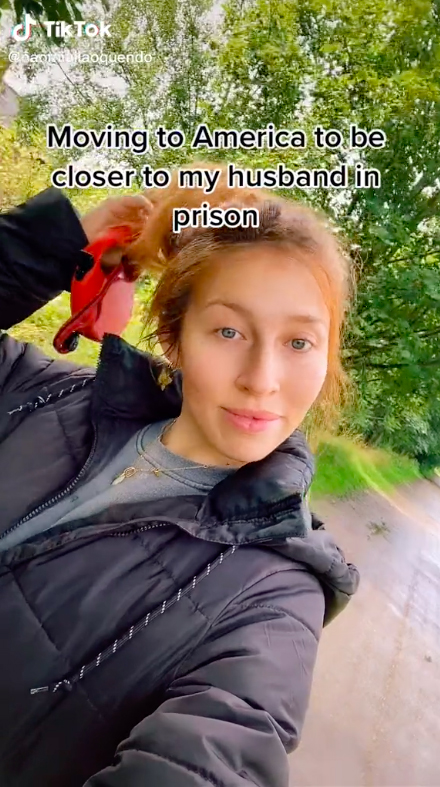 Naomi now plans to move to America to be closer to her husbandCredit: @naomiellaoquendo/Tiktok

Elsewhere in relationships, I’m the world’s cheapest mum, I refuse to spend thousands on my daughter’s wedding – she can wear second hand lingerie.

Plus woman reveals worst Tinder date ever as match’s ‘dead ex’ turns up to the same restaurant.

And I’m scared my family won’t approve of my relationship with my prison pen pal.

The Sex Column: ‘Should I stop being Mr Nice Guy?’