BEFORE going on a first date, a million questions always run through our mind: will the conversation flow? Will they like me? And most scary of all, will they take one look at me and run the other way?!

When TikTok user Ashleigh finally met up with a guy she’d been chatting to online, she worried that this fear was actually becoming a reality.

Ashleigh thought she was being stood up when her date went to ‘look for his wallet’Credit: tiktok

But what happened next was much, MUCH worse.

Last week, the singleton went viral when she shared her dating horror story from 2016.

In a series of videos, Ashleigh gave her old Tinder match the fake name Paul and said he seemed like a “very nice guy”.

Due to their conflicting schedules, the couple didn’t meet up for the few first months.

But when Ashleigh mentioned that she was hanging out with a friend at a mall near where he lived, Paul jumped at the chance to see her.

Initially, Ashleigh turned down his offer of dinner because she was with her friend – but he insisted on taking them both out as his treat.

She explained: “We met him at a LongHorn steakhouse – he shakes her hand and hugs me.

“Once we get to the door [of the restaurant], he starts patting his pants and goes ‘oh my god, I left my wallet [in the car]. Go ahead and put our name on the waitlist.”

Fifteen minutes then go by and Paul hasn’t come back from his car yet – so Ashleigh and her friend naturally assume she’s been stood up.

She continued: “So I was sitting there, almost in tears, because I really liked this guy.

“And me and my friend just decide to leave and go grab some McDonald’s because I wasn’t really in the mood to get a steak dinner at that point.” 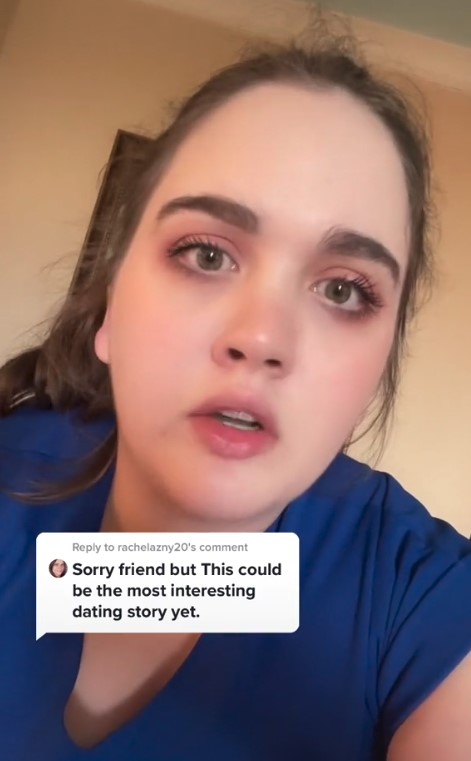 She claimed she found him completely naked in his carCredit: tiktok

As they left the restaurant, the friends noticed that Paul’s car was still parked nearby – and Ashleigh’s mate decided to go up to it first to confront him.

Describing how she was still trying to call him, Ashleigh explained: “My friend went up to the car and let out a scream.”

She then tried to warn Ashleigh not to look in the car – which naturally made her think something terrible had happened.

Ashleigh’s videos have racked up over four MILLION views – and needless to say, viewers were equally as horrified.

“I think I would have rather been stood up,” one replied.

Another joked: “He was just looking for his wallet!!”

“What a twist,” a third wrote.

For more relationship horror stories, this woman proudly showed off the engagement ring that was ‘bigger than she wanted’ & everyone is saying the same thing.

And this ‘bride’ was praised for her stunning lace wedding dress… until people realised she isn’t the one getting married.

Plus this man shames his date for paying for their meal with coins and gets absolutely savaged.

I invited a guy I met on Tinder round for sex – he pooed himself mid-way through in my bed, it smelt so bad and I was the one who had to clean it up