LOOKING back on it, the sex education we were taught in school consisted of putting a condom on a banana and not much else.

So if were late on our period at the age of 17, we probably would have panicked and assumed we were pregnant just like TikToker Katie did.

Katie thought she was pregnant at 17 when she was late on her periodCredit: TikTok 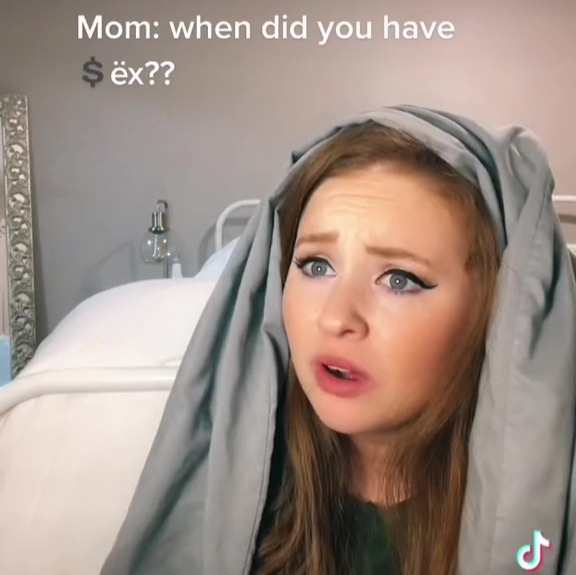 She had to explain exactly what her and her ex-boyfriend had been up to to her mumCredit: TikTok

Earlier this week, the social media star said she did a pregnancy test as soon as she could – and was terrified when it turned out to be positive.

There was just one small complication – the then-teenager had never actually had sex.

In a viral video that’s racked up over 10 MILLION views, Katie – now 27 years old – explained how the first thing she did was call her ex-boyfriend to tell him the news.

After he didn’t pick up the phone, the terrified teen texted his mum to ask what she should do – who just joked that she “needed a cigarette” to cope with the bombshell.

Desperate to talk to the baby’s dad, Katie turned up at his work as he was finishing his shift but he still didn’t want to speak to her.

When she told him she was pregnant, Katie alleges her ex replied: “Not with my baby you’re not!”

With nowhere left to turn, Katie had no choice but to tell her mum – who demanded to know when she’d been having sex.

Katie told her: “I didn’t! We never did. He did [ejaculate] in his [trousers] though.”

Unsurprisingly, Katie’s mum demanded to see the test then and there – but the teen had already thrown it away in case anyone saw it.

Luckily, she had kept hold of the receipt – which is how the mum and daughter discovered her awkward mistake.

The teen asked: “What does OPK stand for?”

He told everyone I faked a pregnancy. I did not become the next Virgin Mary…

Katie recalled: “Had to buy an actual pregnancy test the next day. It was negative.

“I got my period that same day. It was only late because I was stressed and sad over the break-up.

“He told everyone I faked a pregnancy. I did not become the next Virgin Mary.”

One viewer replied: “To be fair, the ovulation tests look EXACTLY like pregnancy tests. Unintentionally scared my hubby once showing him one.”

Another added: “That was a wild ride.”

Meanwhile, a third joked: “This was the best mini soap opera I’ve seen!”

For more real life stories, this woman had thousands in hysterics over hilarious way she told her parents she was pregnant at 18.

And this couple called their new baby after a truck – cruel trolls have said they shouldn’t be allowed kids but they think it’s cute.

Plus this mum has an eight-month-old & is already planning baby number two- people slam her for it but she wants 8 & needs to get a move on.