A WOMAN has revealed how she is now married to her father-in-law – despite a 29 year age gap – and they have a baby girl.

When Erica Quiggle’s relationship with her first husband, factory worker Justin Towell – father of her nine-year-old son – faltered in 2011, her father-in-law, Jeff Quiggle, 60, an engineer, offered her a shoulder to cry on. 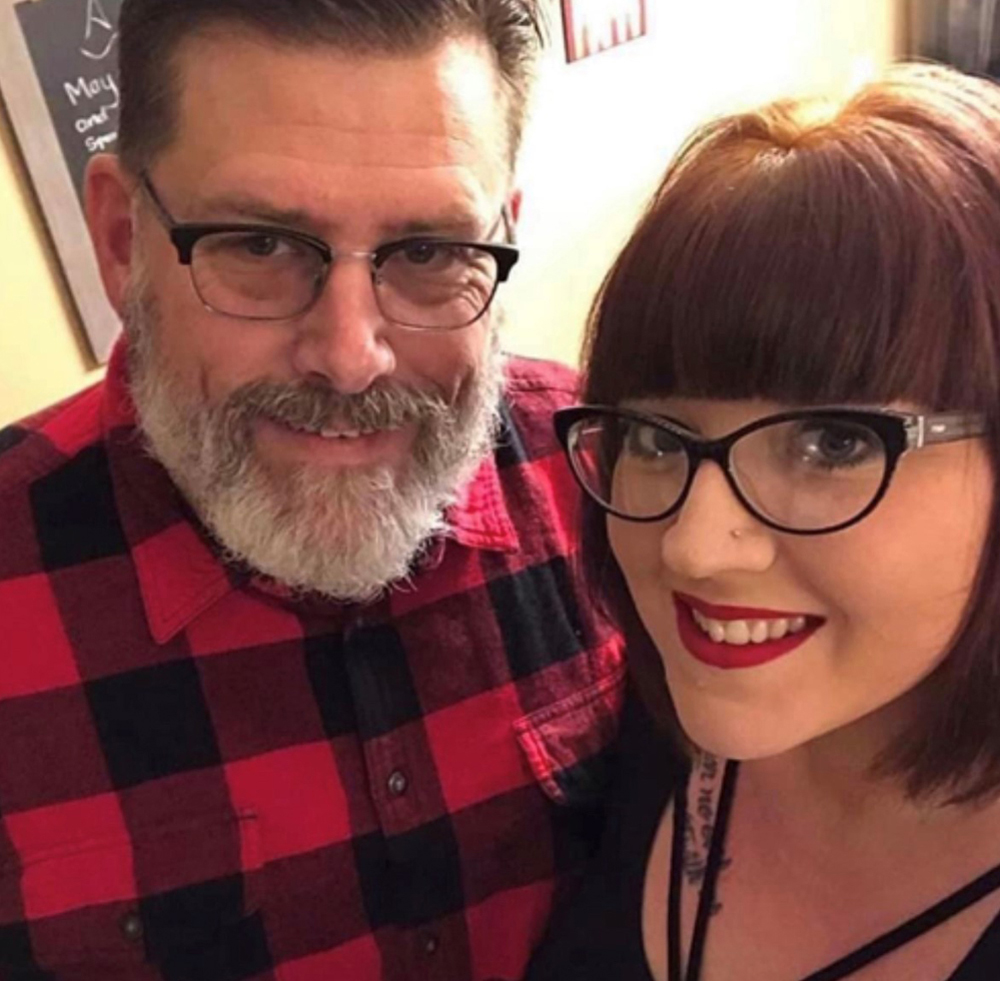 When Erica Quiggle, right, went through a divorce with ex husband Justin Towell, his stepdad Jeff Quiggle, left, was a shoulder to cry on – and they are now marriedCredit: PA Real Life

But stay-at-home mum, Erica, 31, of Kentucky, USA – who was just 19 when she married Justin, now 38 – soon found her gratitude to his stepdad Jeff blossoming into love.

Not wanting to hurt anyone and with an age gap of almost 30 years, she tried to fight her feelings but, in 2017, by which time their respective marriages had ended, Jeff had confessed to feeling the same and they made their love public.

They then completed their family when their daughter, Brexlee, two, was born in 2018, after they were married in August that year.

Erica, who had known Jeff through Justin’s sister since she was 16, said: “It sounds scandalous, but we had this love we could not deny. 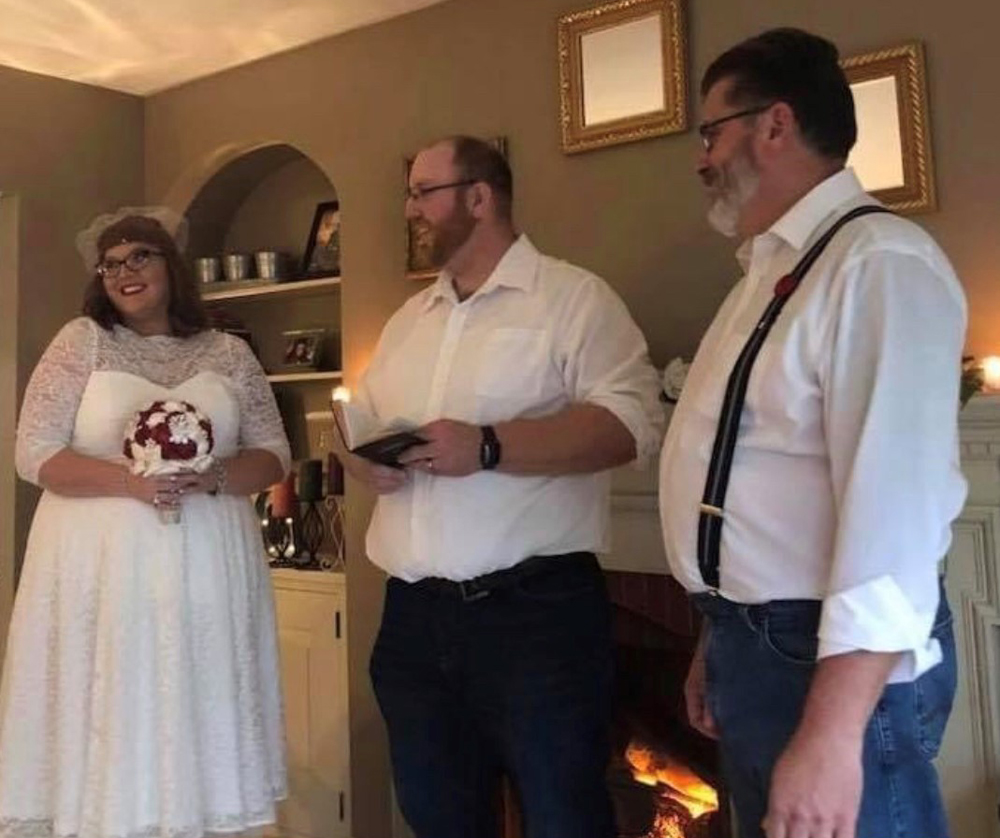 “Despite everything, our relationship now is perfect.

“Jeff is the young soul and I’m the old soul. He laughs when I say that, but it all worked out – and Justin was the most understanding person.”

Erica shares custody of her son with Justin, who has remarried and still lives in the same close-knit community – as does his mum – and now wishes the couple well.

Justin said: “Everything’s all good now between us.

“There’s no hatred there anymore. We talk about our son and we’re both moving on with our lives.”

Meanwhile, Jeff, who is not naming his ex-wife out of respect for her feelings, says he has found his soul mate in Erica.

He explained: “We really enjoy each other the way we are and we’re going to enjoy the time we have.

“We’ve never looked at the age difference – we just fell in love the way we are.” 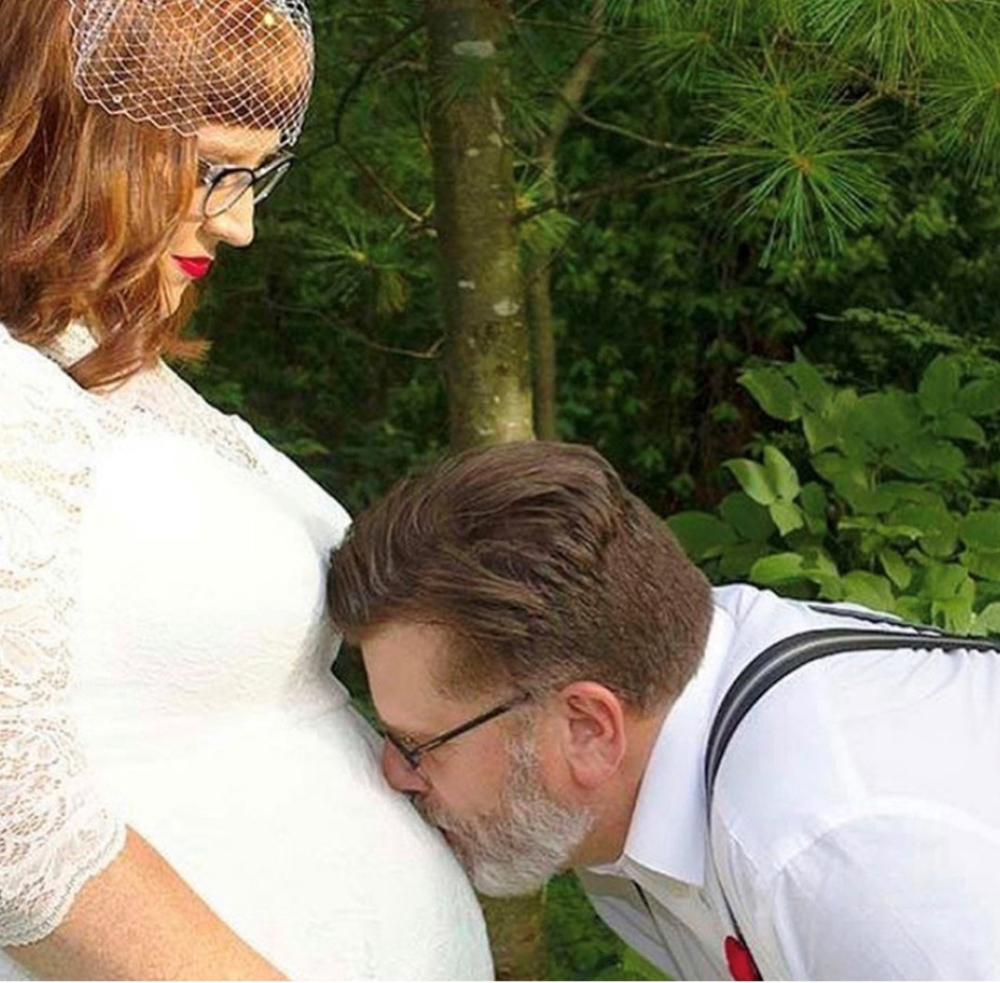 They then completed their family when their daughter, Brexlee, two, was born in 2018Credit: PA Real Life

After leaving high school in 2008, Erica – then Erica Lane – who had grown up on a trailer park in Harrodsburg, left home to live with her then boyfriend in nearby Lexington.

But that relationship crumbled so, in 2010, she returned home, found a job in a department store and began dating Justin, then aged 27 – her schoolfriend’s brother – before marrying him when she was 19.

She said: “I met up with him and we went on a date and for some reason getting married seemed like the right thing to do.

“His family and my family said we needed to do it and that we were perfect for each other.”

Sadly, Erica said their relationship lacked sparkle and even the birth of their son, who she wants to remain anonymous, in 2012, was not enough to keep them together. 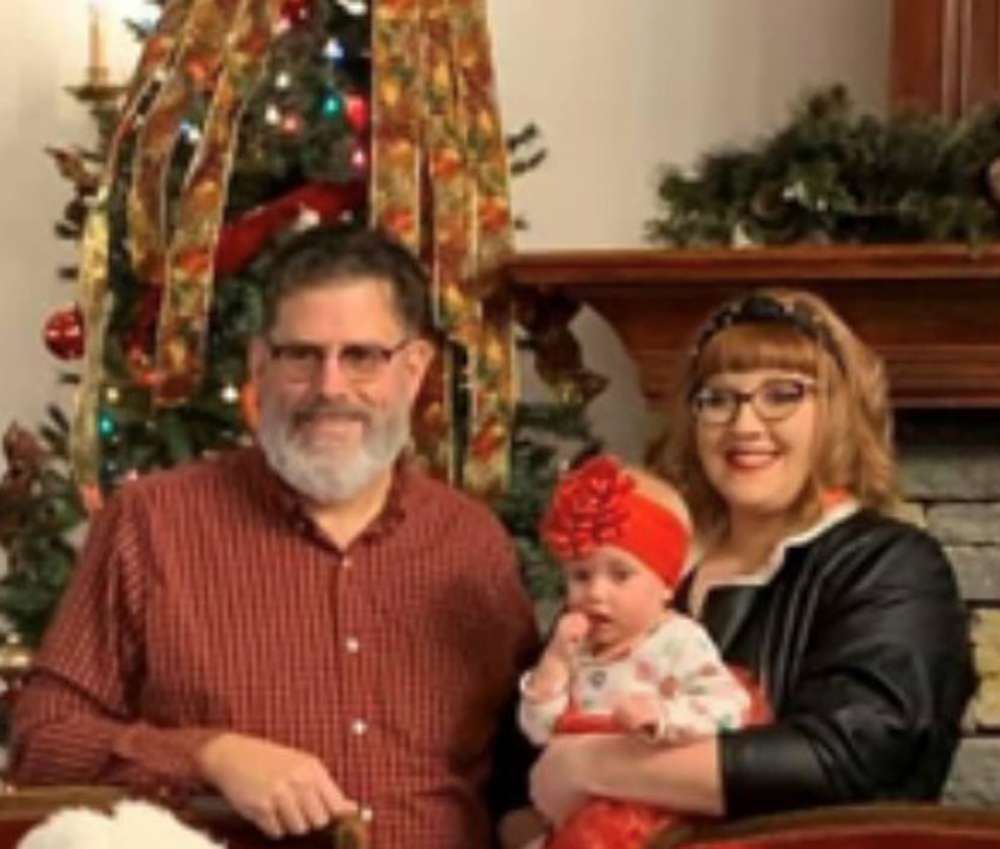 While she landed a job with a major make up franchise in 2015 and longed for travel and adventure, Justin enjoyed being settled at home.

As her ambitions grew, their differences became more pronounced.

She said: “I was building a team and wanted to go on to be a director and travel and do something out of the ordinary.

“In a small town you don’t have that many people who dream. It’s not that he didn’t want me to do it – but he didn’t understand it.

“It was hard for us, as we couldn’t connect on that level.” 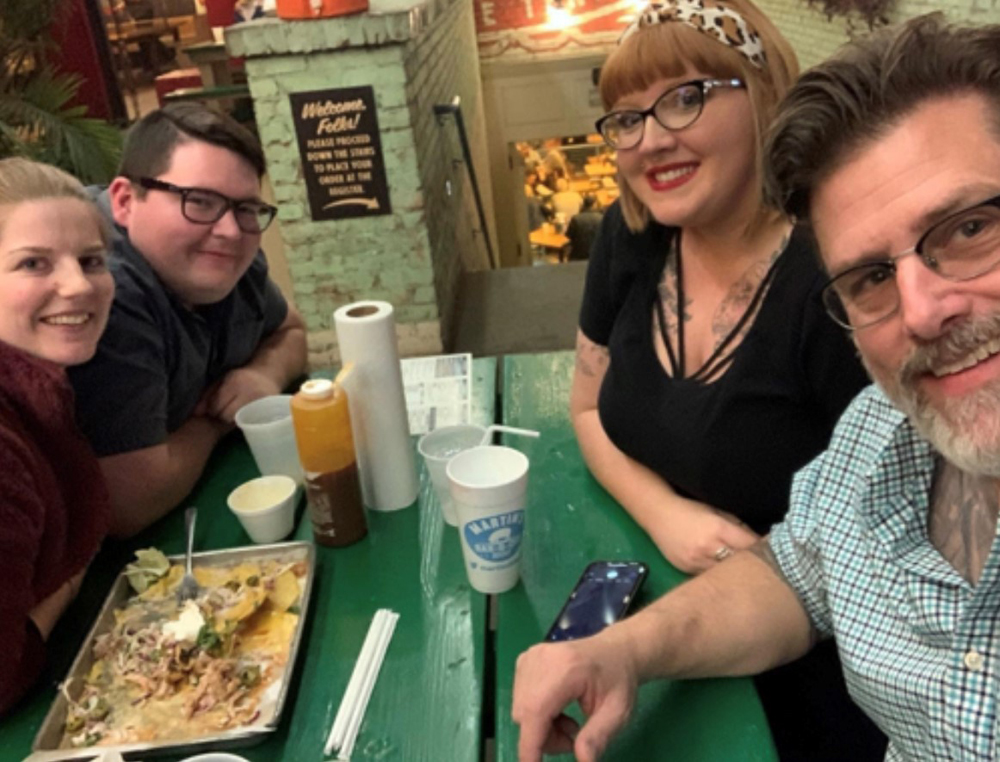 Jeff and Erica pictured with friends out at dinnerCredit: PA Real Life

Her stepfather-in-law Jeff was one of the show organisers – drawing them closer together.

“I had actually known him since I was 16 but, of course, we had no connection at that age,” she said.

But soon they began to confide in each other – with Erica confessing that she had marital problems.

“There came a point when I broke down about Justin and said I couldn’t do it anymore,” Erica admitted. 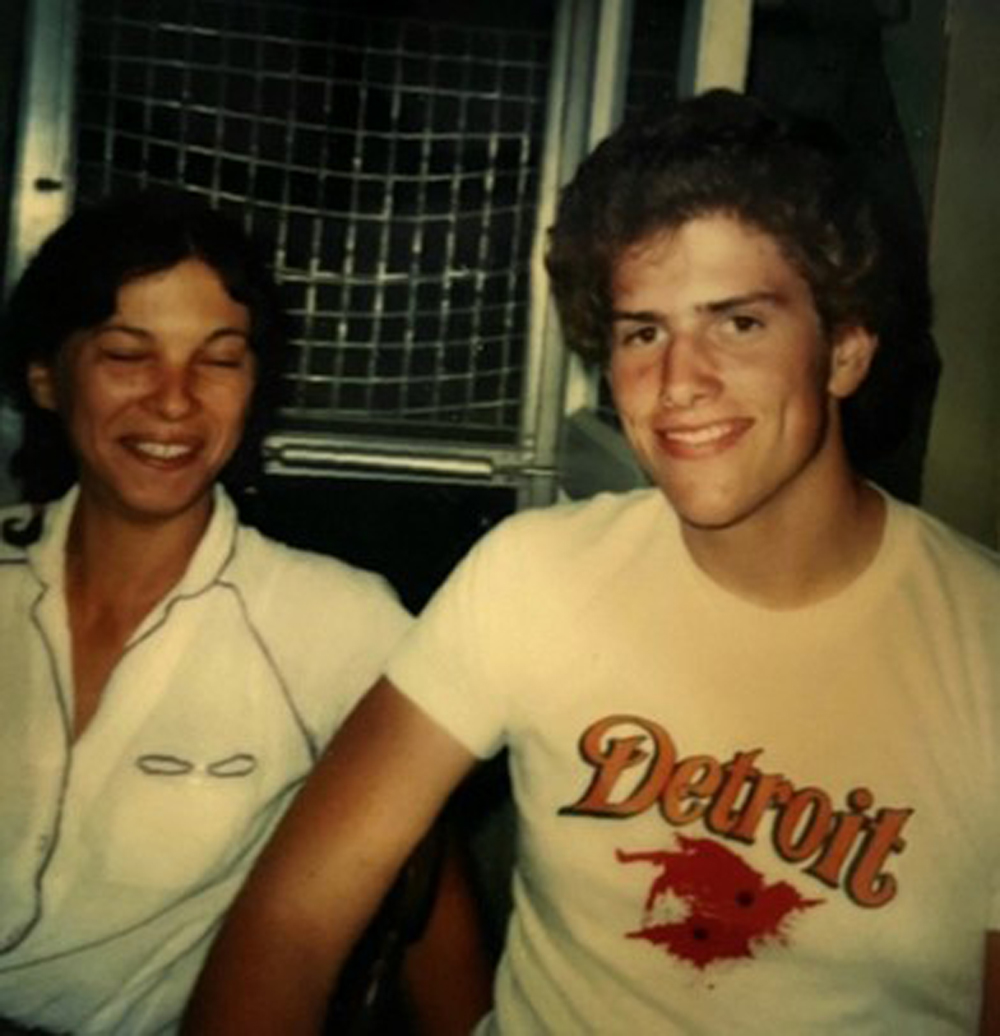 A younger Jeff pictured with his sister in 1978Credit: PA Real Life

That was in late 2015, after which Jeff became her shoulder to cry on, until her marriage was finally over.

In September 2016, the couple were separated and, later that autumn, Erica and Justin split up, too.

Both newly single, Jeff also admitted to Erica that he had deep feelings for her.

Wanting to be honest with Justin, she told him what was happening and was amazed by his understanding response.

She said: “I had a deep conversation with him about how I did not want to hurt him, but I told him mine and Jeff’s love was so strong that we couldn’t give each other up.

“He was being so supportive and said, ‘If you love somebody you love them and you can’t help who you love.’”

And in the summer of 2017, after both their divorces were finalised, Erica and Jeff felt it was time for them to go public and become a proper couple.

Then, in the autumn, he asked her to move in with him.

She said: “Living together was the best thing ever.

“Everyone argues, but it was just peaceful. We spent all our time together, we went on trips, he took me places.” 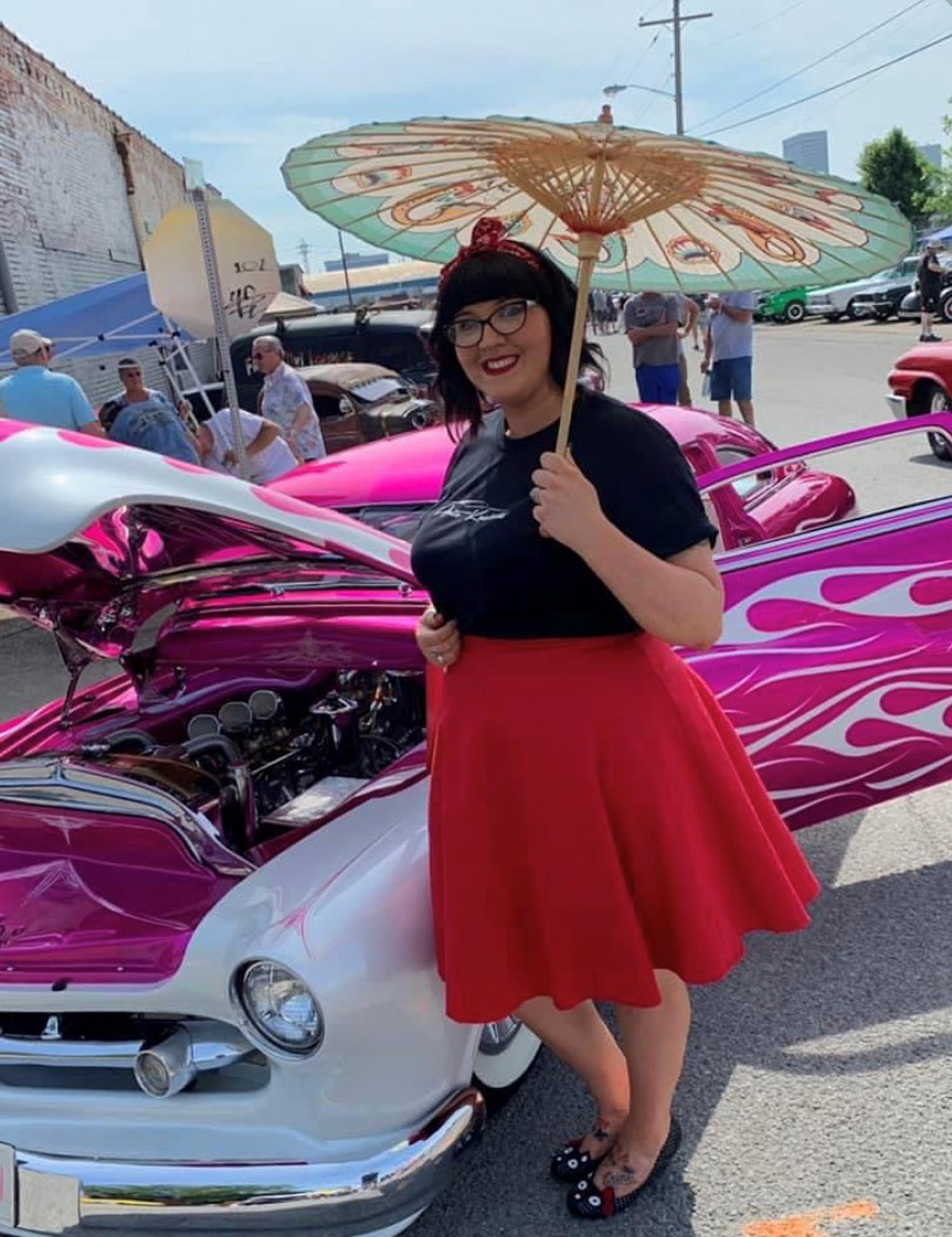 After both their divorces were finalised in 2017, Erica and Jeff felt it was time for them to go public and become a proper coupleCredit: PA Real Life

Luckily, Erica and Justin remained brilliant parents to their son, who to this day splits his time between his mum and dad’s houses.

“My son never remembered anything about us splitting up, which is great,” she said.

And in late 2017, Erica and Jeff began house-hunting – quickly finding their dream property, which they have been fixing up ever since.

But while preparing to move in in early 2018, Erica said: “We had a little surprise.

“We knew we wanted to get married, but we didn’t know when.

“We found the house of our dreams, which we’ve been fixing up for a few years – then I ended up getting pregnant with Brexlee.” 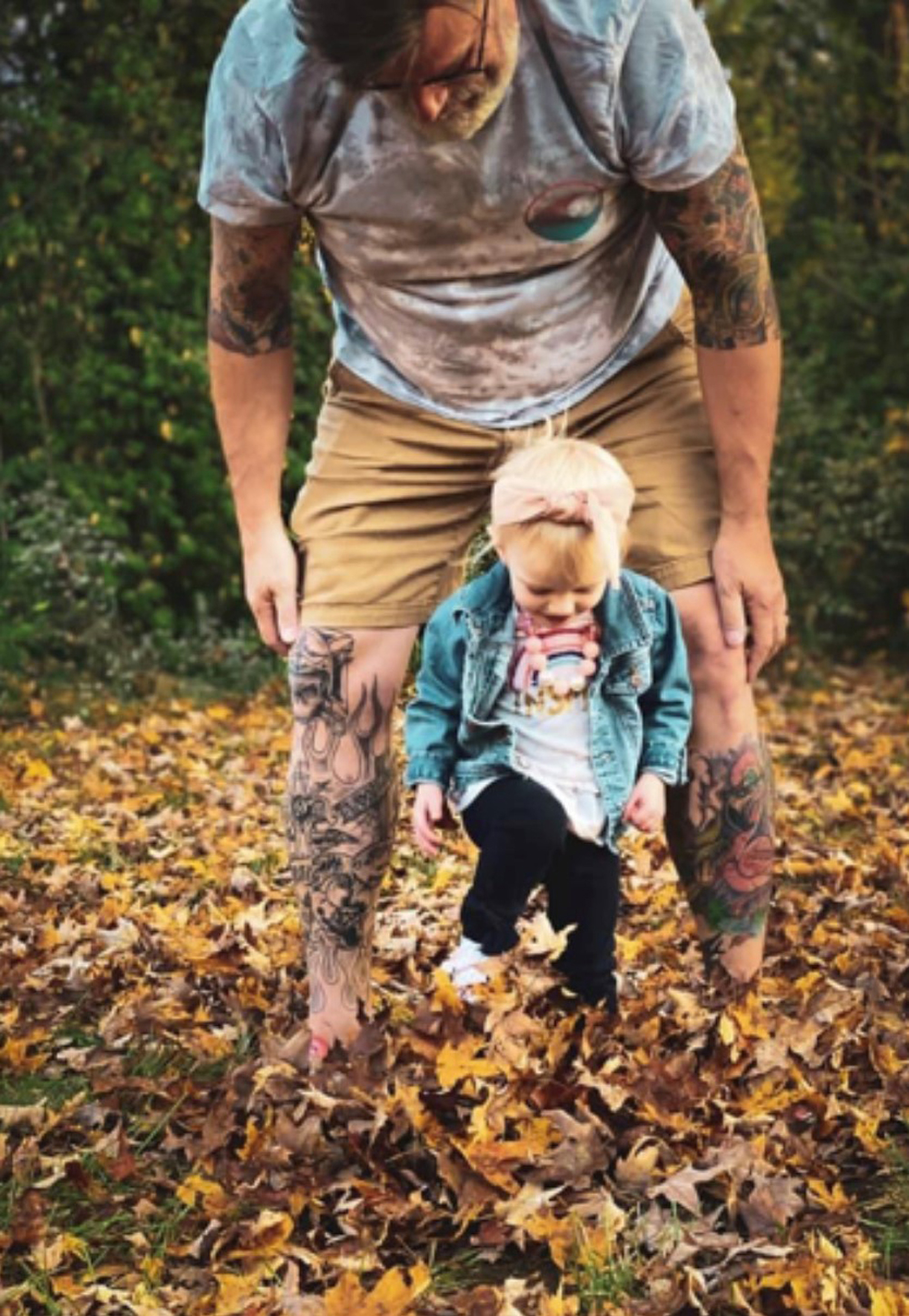 While Erica is blissfully happy with Jeff, she is keen to scotch rumours that she divorced Justin because of himCredit: PA Real Life

Jeff’s proposal, just weeks after moving into their home and finding out they were having a child, while it was not a grand romantic moment, was still everything Erica had dreamed of.

“It wasn’t some romantic proposal, but it was exactly what we both wanted.”

They then held their August 2018 wedding in their new home, which is already filled with special memories for them to treasure for a lifetime.

“I was dressed all pin-up, very vintage and Jeff wore cute suspenders and jeans with a white shirt and Van trainer shoes.

“It was a very special moment.” 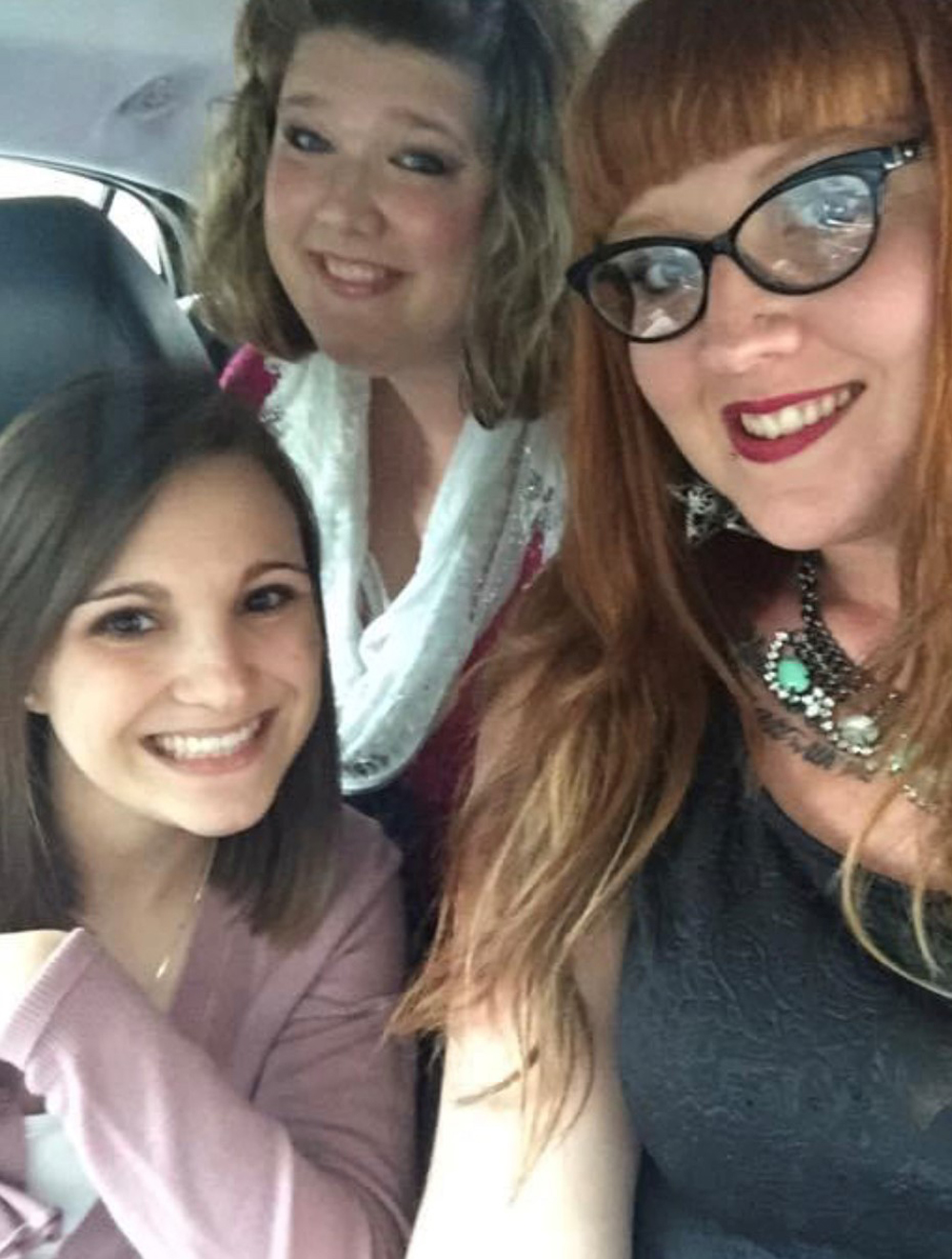 And while Erica is blissfully happy with Jeff, she is keen to scotch rumours that she divorced Justin because of him.

She said: “When we made the decision to divorce our marriage just wasn’t working.”

But she admits that the chemistry between her and her second husband was instant.

She said: “He was very educated and wise.

“He was always learning and when he talked to me, I had all these butterflies. I’ve never had that before.

“Seeing him live out his dreams, together with his success at work put everything into perspective for me.

“I realised there was someone out there who did want more in life – it was just someone who was unexpected.” 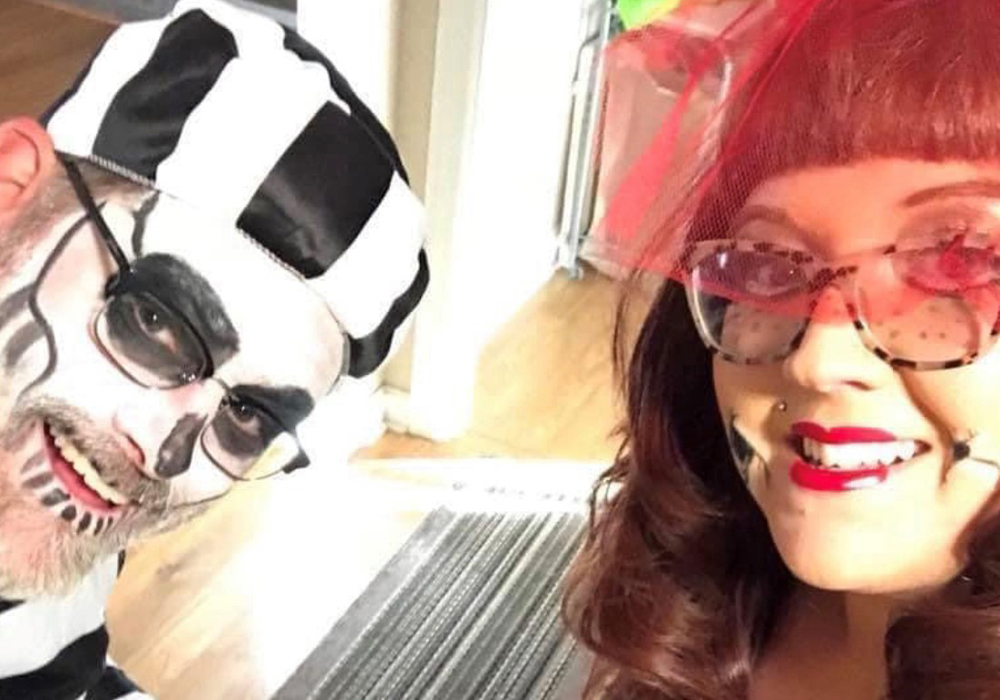 Erica’s ex husband Justin has given the couple his blessingCredit: PA Real Life

Jeff admits his love for Erica soon grew as he got to know her well.

He said: “We had things in common. I show cars and we would go together as she started doing pin-up at some of the car shows.

“We grew a lot closer to each other. We fit together really well.”

He also describes Erica as an “old soul” which means he does not feel their age gap.

He said: “My relationship to Justin doesn’t feel that different than it was before. It was a little hard at the beginning, but he’s a really loving person and wants people to be happy.

“He comes to the house for birthday parties for his son.”

Jeff is also delighted that Erica made his dream of becoming a father come true.

“I’m going to have a great retirement doing all these things with my daughter,” he said.

“The age difference between me and Erica doesn’t bother us. 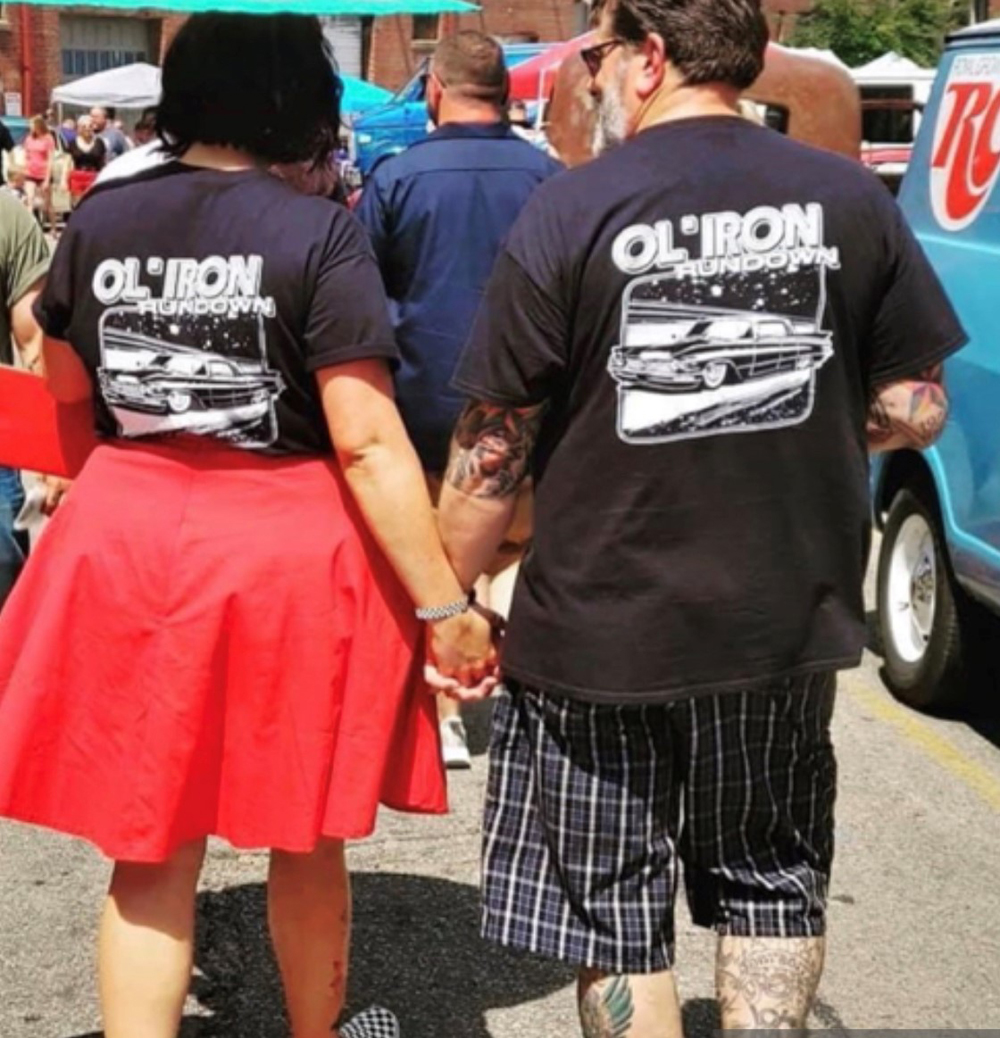 Jeff admits his love for Erica soon grew as he got to know her wellCredit: PA Real Life

Justin has also given the couple his blessing.

He said: “It’s been a few years now since all of this happened, and I’ve left it behind me and moved on.

“Me and Erica have a kid together, and we think about him above everything else.

“We do what we can to provide support for each other and keep things on the cool side.

“We have a pretty good relationship – and we have to make it work regardless for our son.”

We shared how a couple with 23-year age gap got engaged in a MONTH, have matching tattoos & he’s 3 years younger than her parents.

Previously, a mum, 27, revealed the 26-year age gap between her and her fiancé – who is older than her parents – means he’s often mistaken for her dad.

And a student, 19, insists that ‘love has no age limit’ after falling for lover, 52… but her family have disowned her over the 33-year age gap.

I’m 19 and dating a tennis coach, 48, I met while playing with his DAUGHTER – our families give us hell but we’re in love