A HUSBAND was sick of his wife complaining about his poor aim while going to the loo, so challenged her to give it a go using a bucket and a hose – proving how hard it is.

Jaimie Kramer, 45, said that his wife Jess Kramer, 37, would always moan about his inability to “get every drop in” causing her to clean up his mess “again, again and again”. 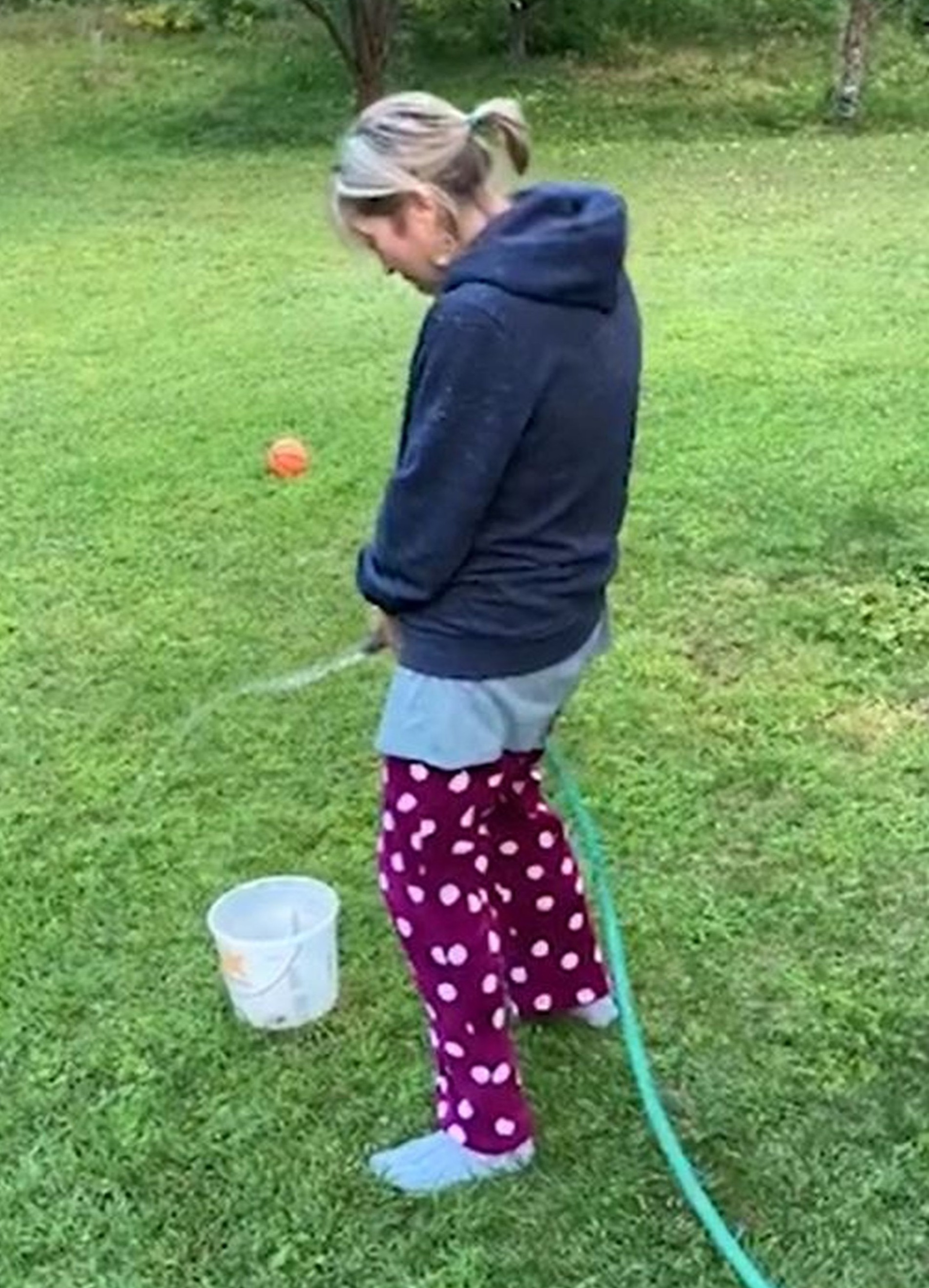 Jess Kramer, 37, was challenged by her husband Jaimie to practise her aim after complaining about his toilet habitsCredit: Kennedy News and Media 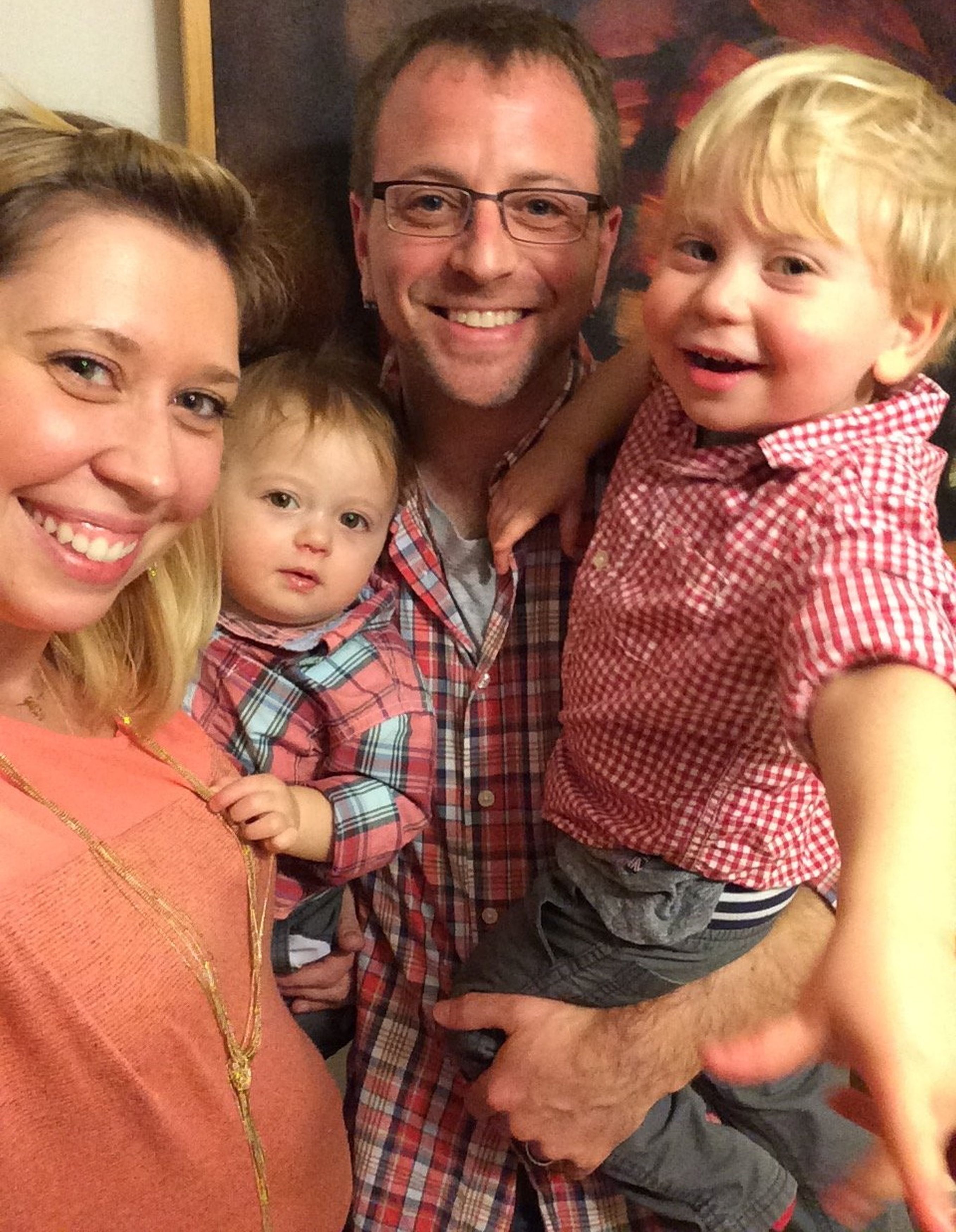 Jess is the only woman in her household of boys and is sick of cleaning up the mess “again and again”Credit: Kennedy News and Media

His poor toilet habits became a running joke between the pair but the dad-of-two was eager to prove just how tricky it is for men to nail their aim.

So he challenged her to hold a hose over a bucket while making sure all the water lands inside.

The 37-year-old mum – who is the only female in a household of boys – failed miserably and admitted she’d “totally lost”, but did gain an “entirely new respect” for her partner’s difficulties.

The hilarious footage, which went viral with more than two million views, shows Jess directing her hose at two buckets before Jaimie nabs one as he “doesn’t get the luxury of two”. 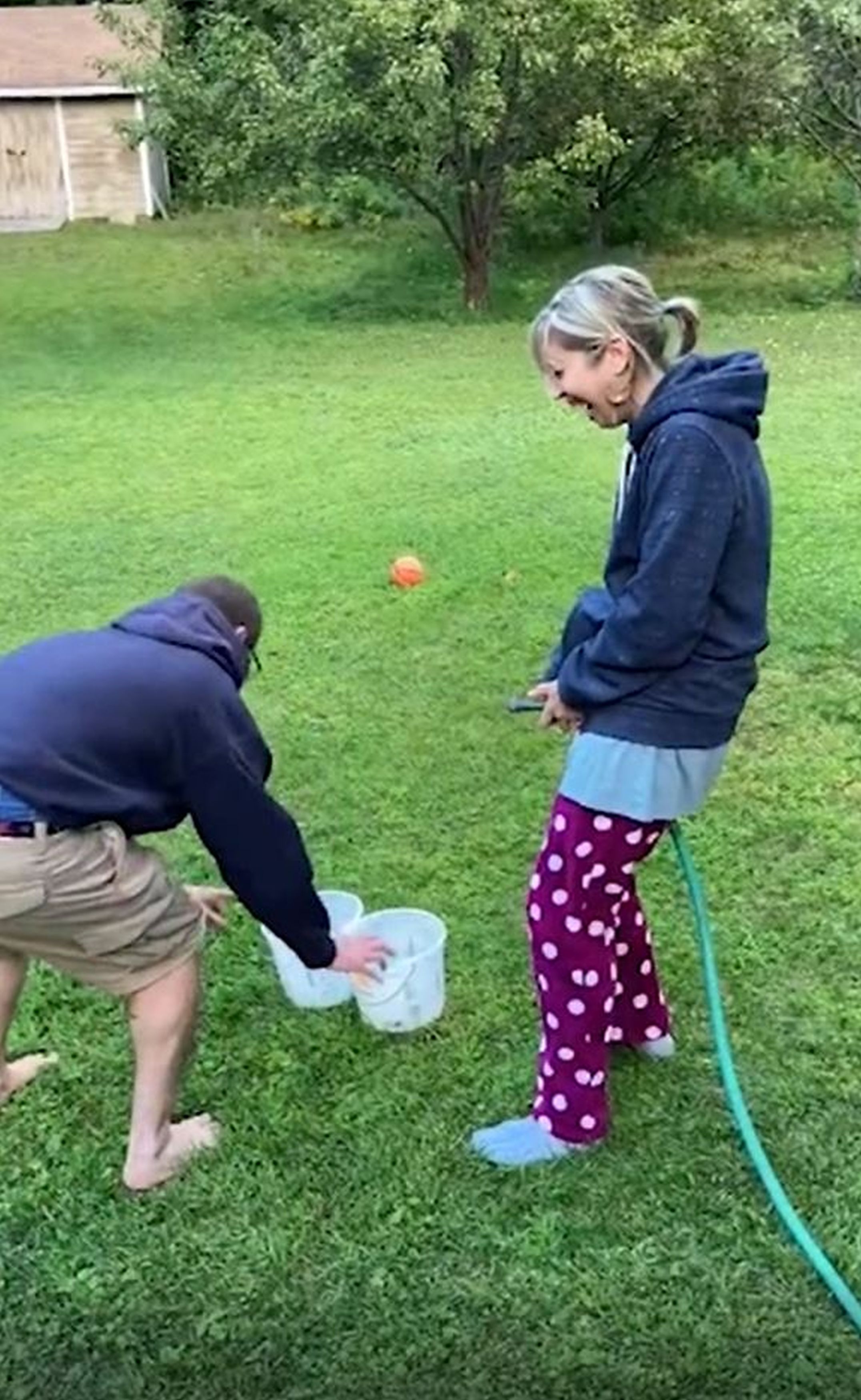 Jamie first gave her two buckets to get the water in, but took one away saying he “doesn’t get two” when he goes to the looCredit: Kennedy News and Media 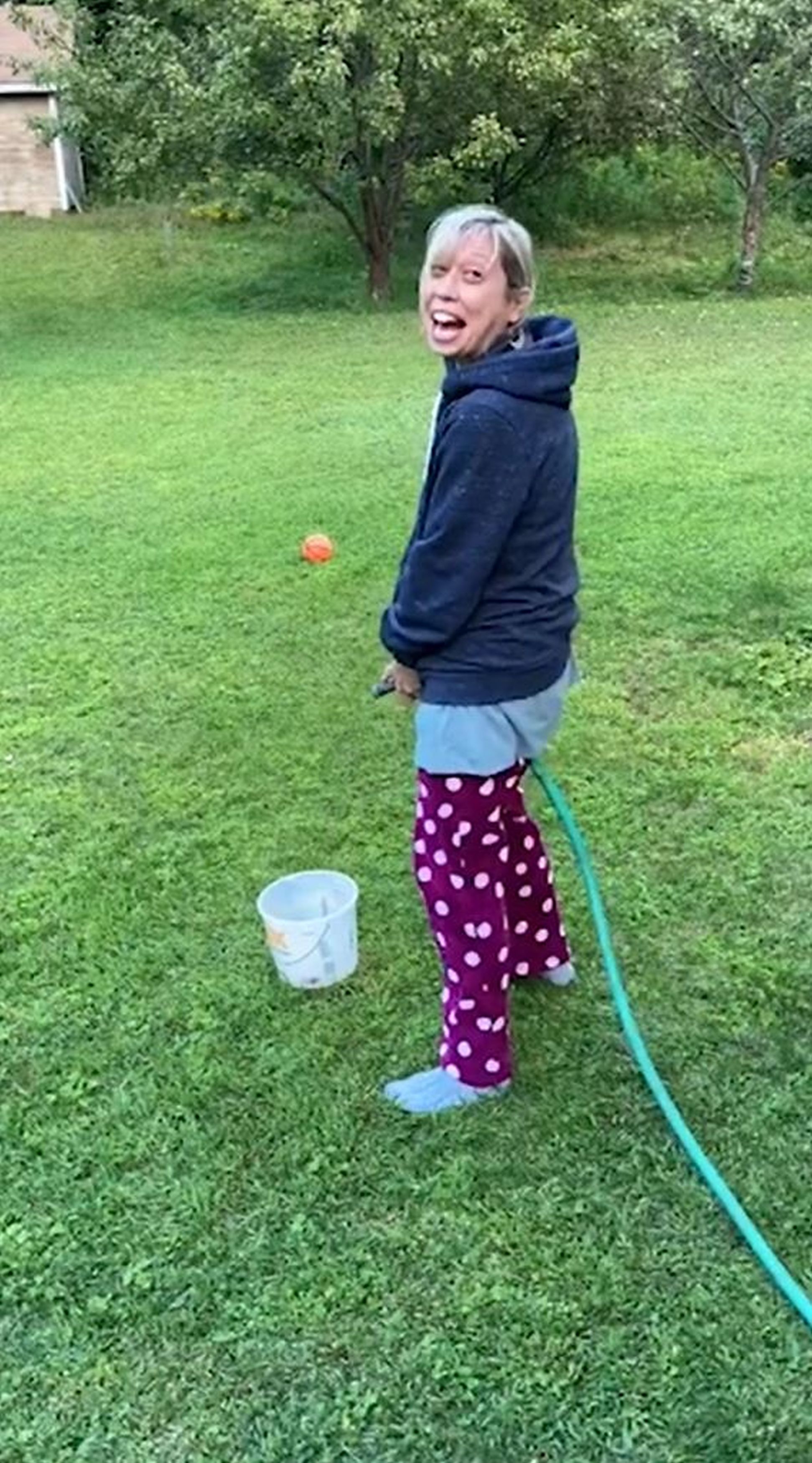 Jess struggled and admitted it was actually trickyCredit: Kennedy News and Media

Jaimie Kramer, of Williston, Vermont, US, said: “I always joke that being a man has real problems that we take for granted.

“She was going on about me, all the boys and our inability to get every drop in and I was like ‘you don’t know how hard it is and what we’re up against – it’s not as cut and dry as you think’.

“I was like ‘we don’t have as much control as you want to believe we do’ and ‘you try it to see how much you can get in and you can’t spill a drop’ – every drop counts.

“I think it was me taking on the plight of men – I’m likely to take on the softball issues that nobody else is really fighting for.

“I thought her attempt was very exemplary of what it’s like living with a penis – you’re going to get like 80% in. 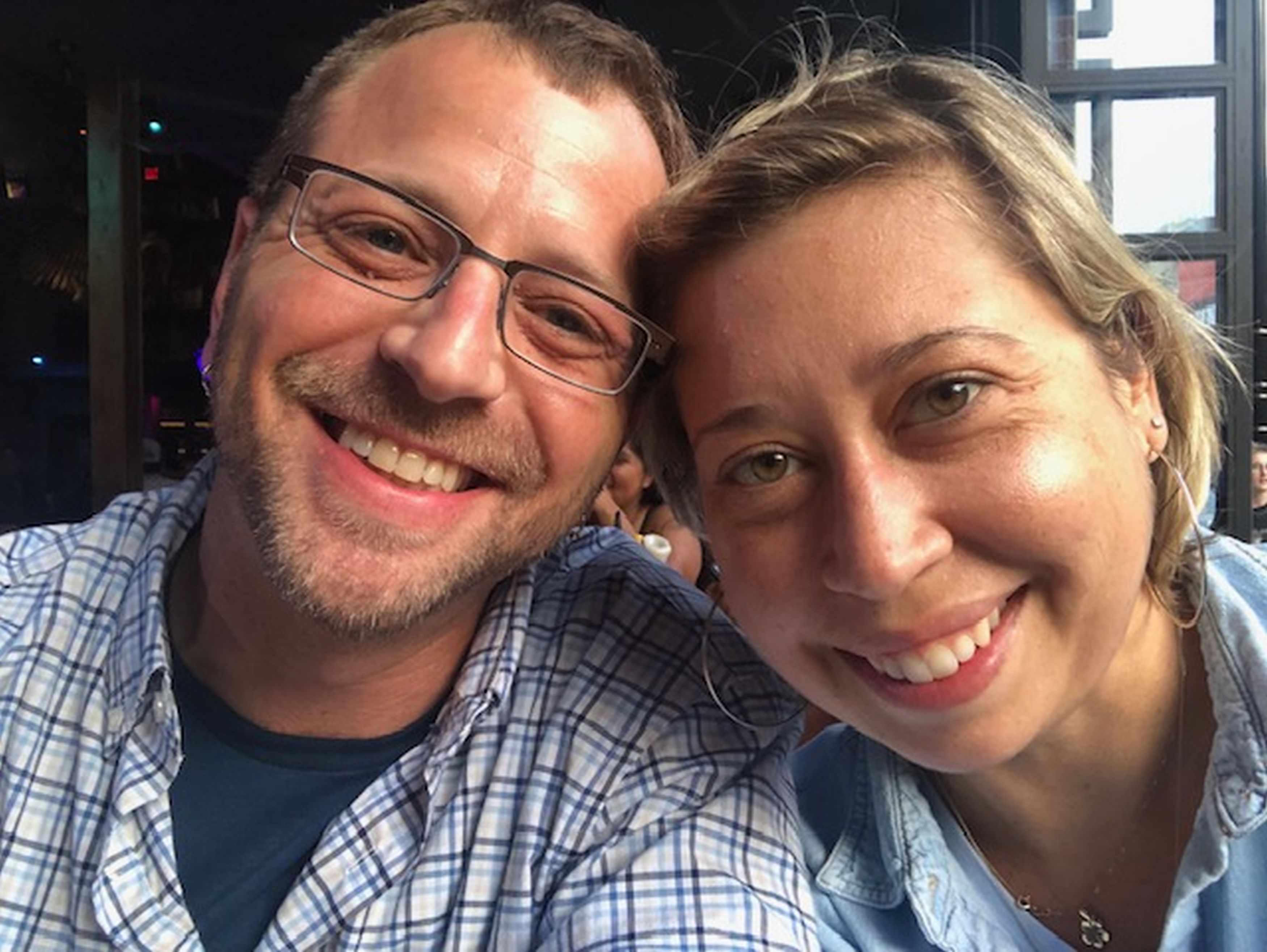 The couple filmed the scenario and shared in on TikTok where it went viralCredit: Kennedy News and Media

“Once you understand what you’re working with and where it’s aiming, you can adjust but there’s a couple of moments in the process where you hope, especially when it’s dark out.

“I felt vindicated and the more attention the video gets, I feel like our cause is getting out there.”

Being the only female in a household of five men, including their male cat and dog, posed some unique challenges for the science teacher.

Engineer Jaimie tasked Jess with getting every single droplet in the bucket during a family BBQ and a friend filmed the scene so the mother-of-two could assess exactly how she performed in it.

Jess said: “Whenever I would go to the bathroom and the seat would still be up and I’d notice stuff on the toilet bowl or on the floor and I’d just had to clean it up again, and again, and again. 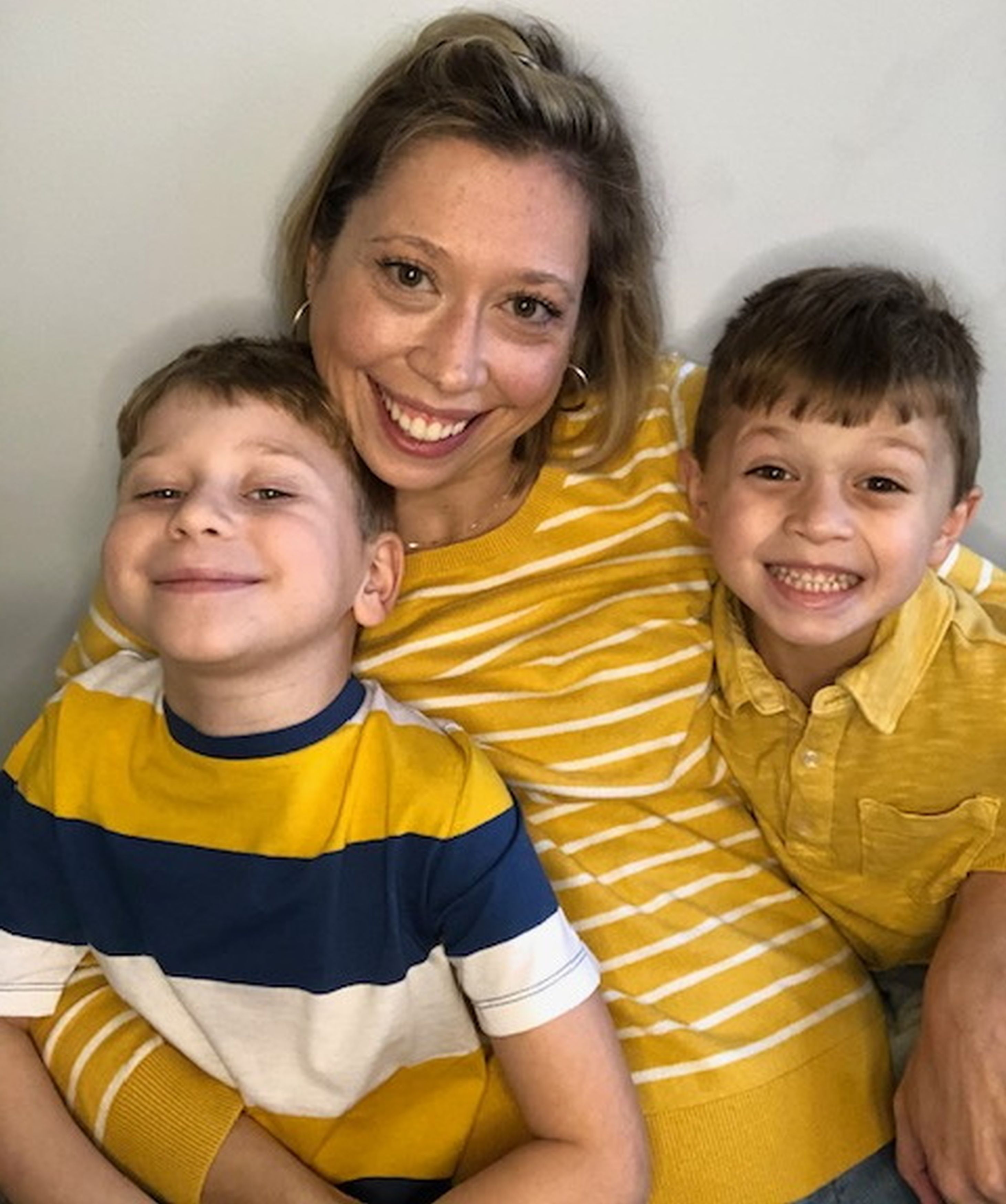 jess said she’d always cleaning up the bathroom after her boys miss the looCredit: Kennedy News and Media

“It became so much of a joke that it was just another offhand comment of ‘had to clean up pee again’.

“We were just on the floor laughing about it [the video].

“It was so funny because it was so hard – someone else being in control of the water flow was really difficult.

“I totally lost – I had an entirely new respect for it – not that I approve of it, and I still think if you have that problem you can clean up after yourself.”

Jess posted the clip on TikTok in a bid to make people laugh – and she didn’t expect it to go so viral as it amassed more than 2.2million views, comments and shares. 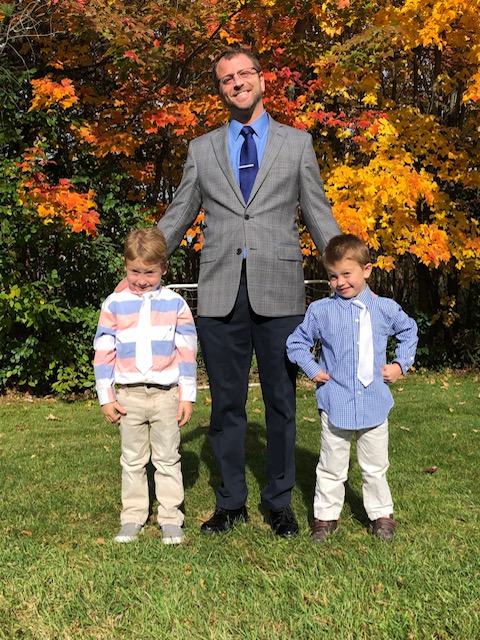 Jamie’s bad aim is a running joke between the couple, but he admits it’s not as easy as it seemsCredit: Kennedy News and Media

The 37-year-old said the video must have been “completely accurate” for many households, as male commenters flocked to say they’ll be urging the women in their lives to try it out too.

Jess said: “I also saw people saying ‘oh, we’re doing this at our next BBQ.’

“I try to make people laugh every day – I want to spread joy, connection and happiness.”

Jaimie added: “Every woman who watches it, whether they realise or not, is understanding at least a little bit of the challenge.

“I would also recommend every woman try it – grab yourself a hose and a bucket – put yourself in our position, give it a go.

“I think it’s so funny because it’s relatable – everybody on the planet understands this conversation and challenge, even if you don’t speak English – one look at the video and everybody understands what’s happening.

“It’s relatable because I feel like everybody in the world either has a penis, or knows somebody who does.”

Meanwhile, a mum who was ‘sick and tired’ of her sons weeing all over the loo comes up with genius way to get them lifting the seat.

And this mum leaves hilarious notes on her toilet to help her sons improve their ‘aim’… and other mums are seriously impressed.

Plus this bloke was slammed for proposing to his girlfriend while she was on the LOO.