A MUM has revealed how she turned a £20 Ikea unit into an incredible Barbie dollhouse for her daughter’s birthday.

Catherine Moses, 26, from Full Sutton in York said she spotted a similar idea on Pinterest of using an old cabinet and decided to have a go at the DIY project herself. 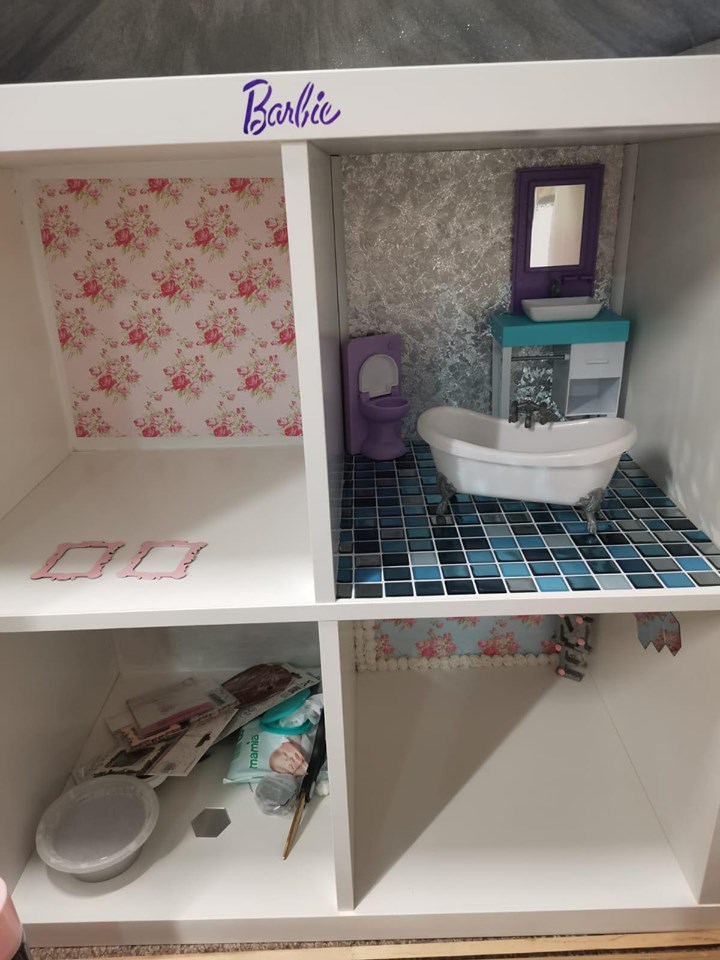 The self-employed cleaner wanted to create a dollhouse for her daughter but also wanted to avoid paying the hefty £300 price tag of the official Barbie products.

Instead Catherine used a £20 Ikea Kallax unit – previously used for toys storage – and turned it into a two-story dollhouse.

She used bargain buys from eBay – including miniature mirrors and stick-on tiles – as well as materials from her craft cupboard to complete the house makeover.

The mum believes she has saved herself over £200 by doing the DIY birthday project herself instead of buying a brand new one. 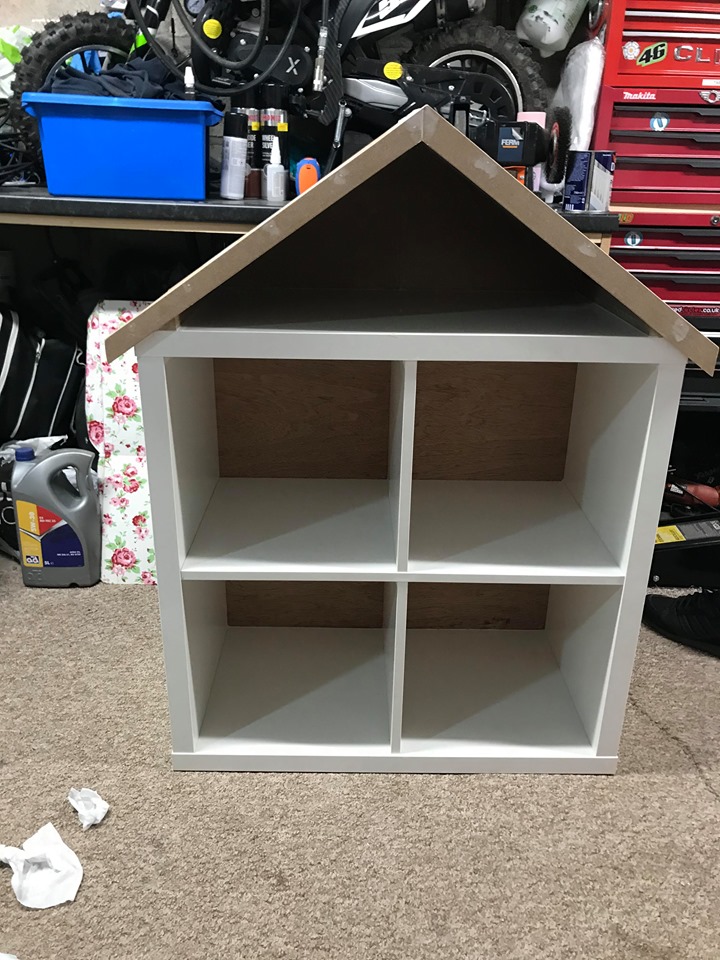 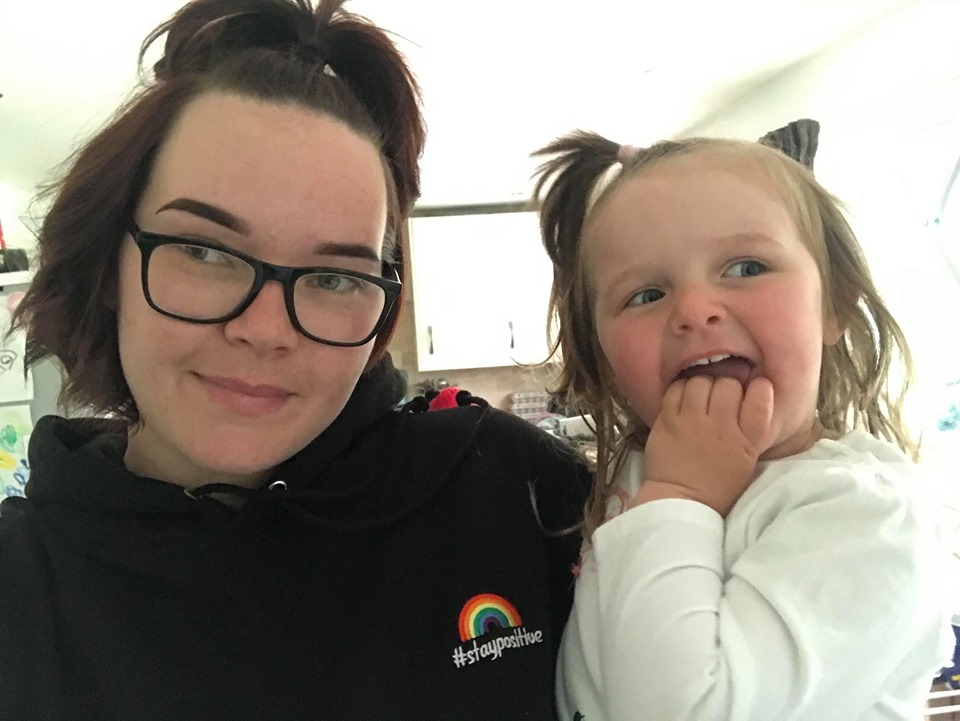 Catherine made the dollhouse for her daughter’s third birthdayCredit: Catherine Moses

She shared the transformation on Facebook, writing: “My Ikea unit turned into a Barbie house!

“Doing it for my daughter’s 3rd birthday. Not finished yet but I’m happy with it so far

The post instantly went viral and raked up over 5,500 likes and hundreds of comments with strangers praising Catherine’s budget creation. 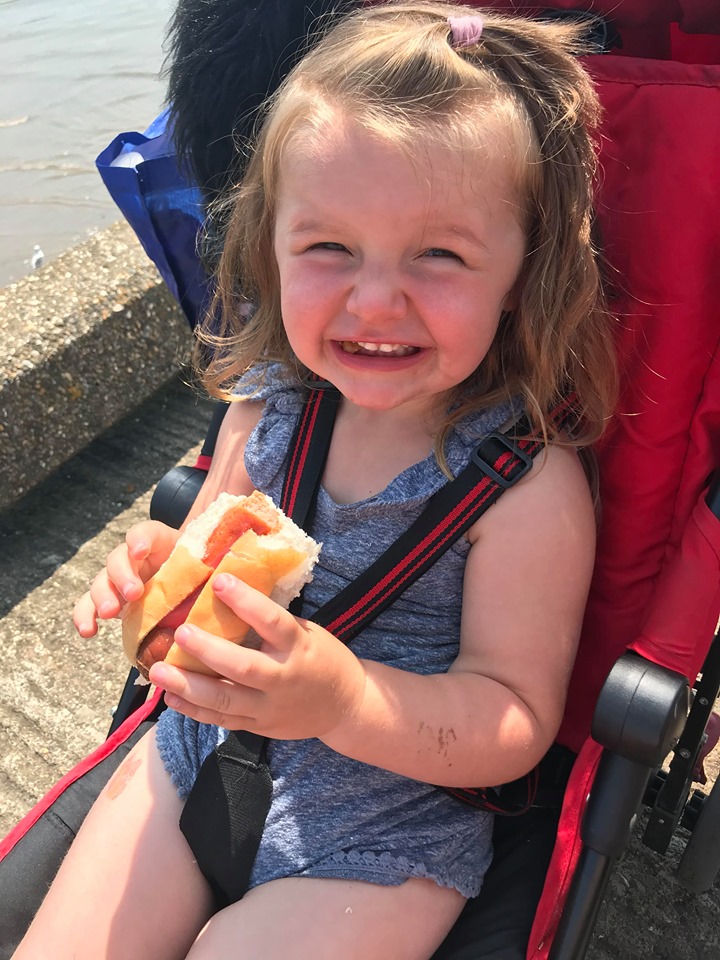 Catherine is waiting to show Amira on her birthday at the end of the month Credit: Catherine Moses

Catherine said she got the idea to turn the Ikea unit into a Barbie playhouse after her friend shared a picture with her from Pinterest.

The mother had previously researched buying a Barbie dollhouse from new but was shocked to discover the hefty £300 price.

She said: “I had a look and based my dollhouse on a picture I found online.

“The Ikea unit was only £20, we’d had it for a while as we were using it to store toys inside Ikea fabric boxes. 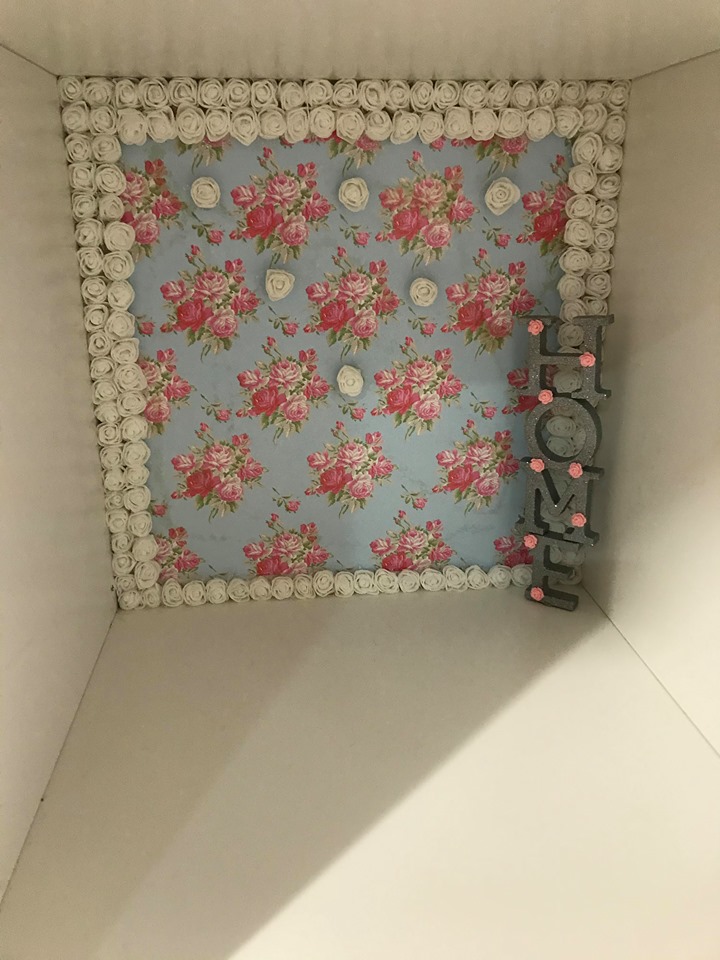 Catherine picked up wallpaper samples from The Range, plus some extra decor items from eBayCredit: Catherine Moses 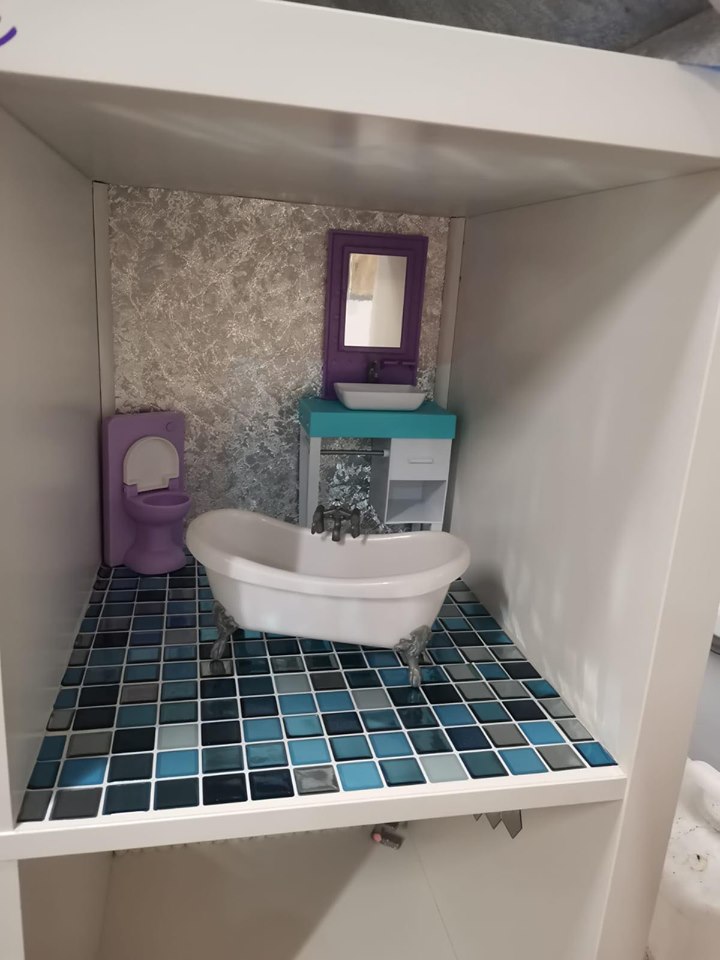 “I decided to make my own dollhouse as I wanted something good quality but I also didn’t want something made of flimsy plastic or overpriced.”

Catherine, who is mum to Amira who will be three-years-old at the end of September, said she asked her partner’s friend for some help to get started.

The joiner made a roof for the dollhouse and used a nail gun to attach it, before using plywood to secure the back of the house.

The friend also measured, filed and sanded the roof.

Catherine said: “I then got some filler to fill any gaps, I waited overnight to let it dry and then used an under coat on all the new wood that was added.

“I then bought three packs of stick-on tiles and some wooden little craft frames from Poundland, I got some wallpaper samples from The Range and I started doing the bathroom first.

“I started with a silver wallpaper which I roughly measured and cut it out before using some spray glue to stick it in.” 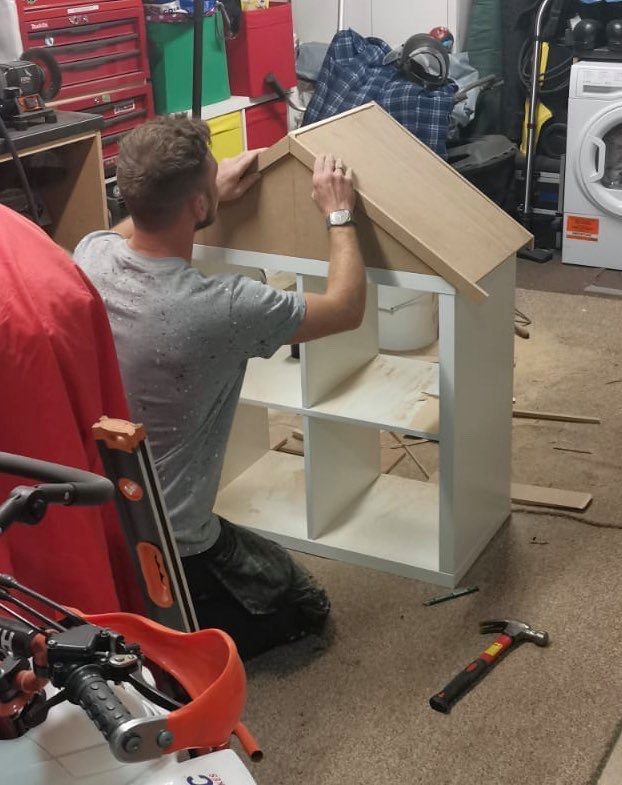 Her partner’s friend made a roof for the dollhouse and used a nail gun to attach it, before using plywood to secure the back of the houseCredit: Catherine Moses 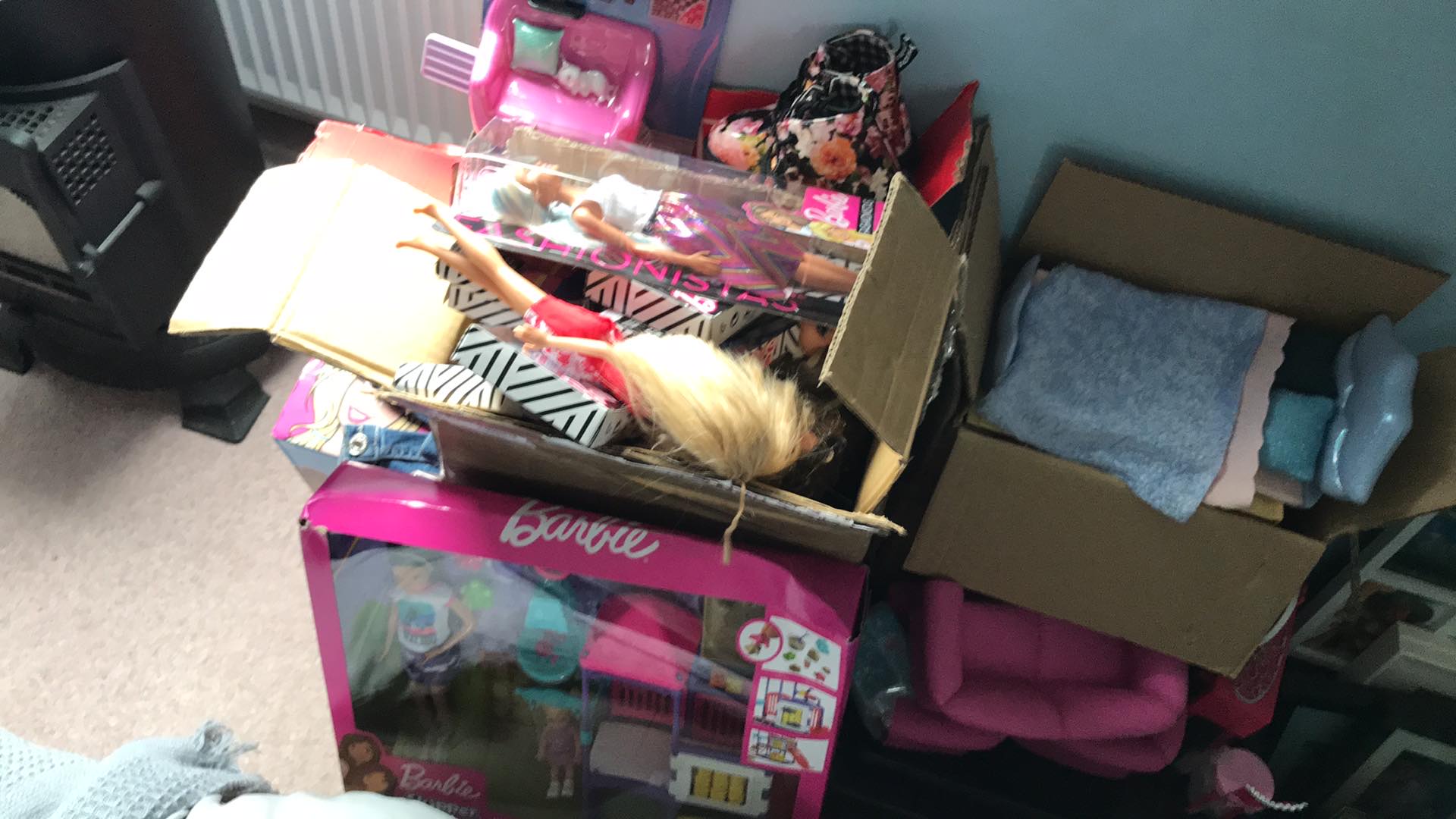 Catherine said a branded Barbie dollhouse would have set her back about £300Credit: Catherine Moses

The mother went on eBay to pick up some bargain buys for the decor of the dollhouse – she spent £1.85 on rose heads and £5.19 on mirror effect tile wall stickers.

She also purchased Barbie stencils from eBay for £7 along with a Barbie bath set for £17 and a living room playset for £16.

She noticed the wallpaper she had stuck in the dollhouse bathroom was short so she decided to add the stick-on tiles.

She said: “The tiles were really tricky to do so it wasn’t perfect but I was still pleased with it.

“I then used some of the beading for the edges of the wallpaper, I just cut them down and put two coats of undercoat on before gluing it into place. 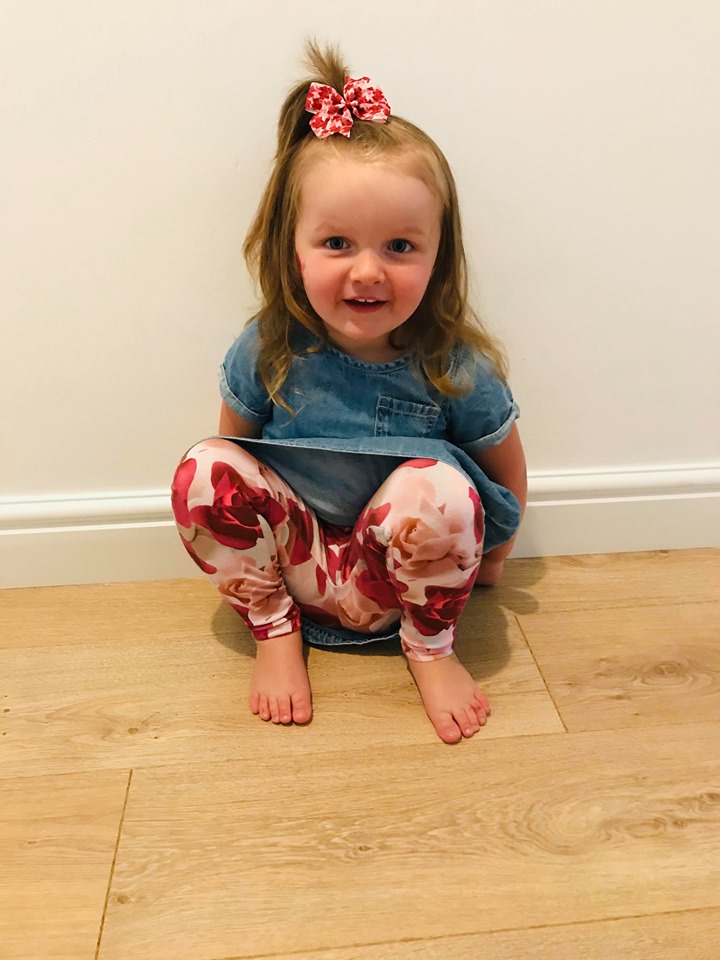 “I then moved on to doing the living room and used some floral craft paper that I already had and glued that onto the back wall.

“It was short around the edges so I improvised and used some foam roses that I had already bought for a different project and I glued them round the edges and that turned out good.

“I then had some wooden letters that were laying around in my craft cupboard so I got the glue gun and glued them together and glued some pink roses on to make it look pretty then glued it to the floor in the living room area.

“I then put some little mirrors onto the wall that I ordered off eBay.”

Catherine also used a Barbie stencil from eBay to label the front of the house with a purple Sharpie pen.

She has also made a start on the bedroom in the dollhouse by adding craft paper to create the illusion of wallpaper. 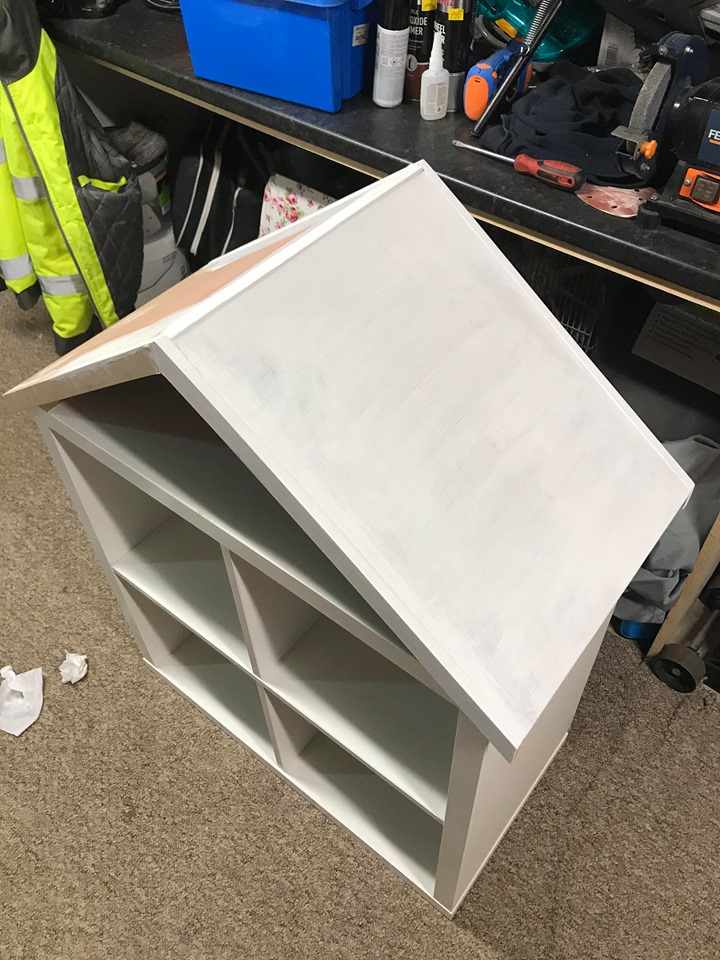 The project was so quick and easy to do Credit: Catherine Moses

The mother started the project at the beginning of September and said she cannot wait for her daughter to see it on her birthday at the end of the month.

She added: “I was looking for barbie houses and they were over £300. I just know she’s going to love this!

“She’s had a sneak peek at it already but I’m trying to hide it under a sheet in the garage before her birthday and until it is finished.

“I just need to finish off the bedroom, kitchen, kids room, the hangout area and the garden area which I’m going to use fake grass on.’

The DIY enthusiast said she also has plans to use a toy box that was made for her son when he was little to create a Barbie hangout area. 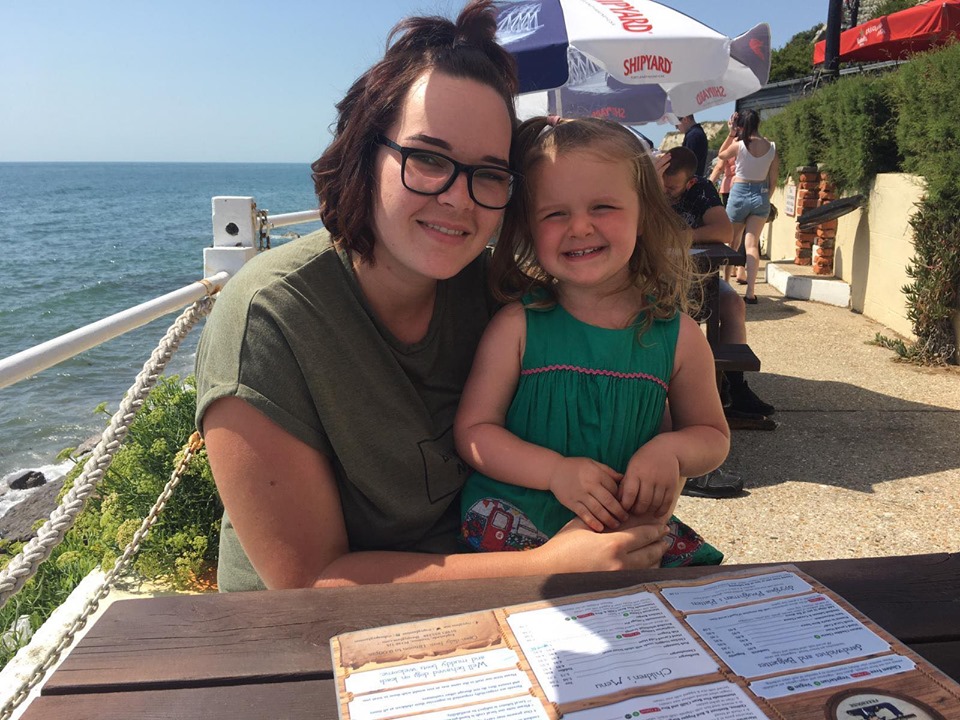 The DIY enthusiast said she also has plans to use a toy box that was made for her son when he was little to create a Barbie hangout areaCredit: Catherine Moses

And she is also going to put a bargain Barbie park set she purchased online in the garden area.

One user wrote: “This is a great idea. Better than the overpriced plastic tat. Looks better quality and reusing items.”

Meanwhile a fourth added: “What a cracking idea. Pinterest has some unusual dollhouses too!”

We also shared how people are turning cupboards-under-the-stairs into playrooms, gaming dens & even DOG beds, here’s how to do for cheap.

For more DIY hacks, one woman shares her cheap IKEA hack which instantly makes your room look twice as big.

As we previously told you, one DIY fan who couldn’t afford new shelving transformed an old Ikea unit instead – and it cost her next to nothing.