Mum shocked by ‘rude’ message from sister about her seven-year-old daughter’s behaviour, but no-one’s really on her side

One mum has taken to the internet to moan about her sister’s “rude message” – but no-one’s really on her side.

A mum was left shocked after her own sister commented on her daughter’s behaviourCredit: Getty

Posting on Mumsnet, she explained she was “annoyed at this message” which was about her seven-year-old daughter’s behaviour at Christmas.

It reads: “I just wanna say like I’ve noticed a certain someone screaming a lot more and I don’t think it’s appropriate especially in places like where there is mum who is tired and sick and also grandma.

“I just feel like it’s important to express that people scream in threatening situations and not for attention. Maybe you can take the phone from her for a day or something or send her to a room if she does it.

“I dunno have you spoken to her about it yet? Hope u don’t think I’m overstepping any boundaries , just think it’s important to say as an Auntie that there needs to be some discipline.

The mum added: “This message really got my back up, yes she was loud and she has started to try and assert her presence. I just found the message rude?”

But instead of siding with her, her fellow parents told the mum she needs to get the screaming under control.

One said: “My son is a bit older but I’d be absolutely mortified if he was screaming in any situation that wasn’t pain/fear”.

While a second said: “Sounds like your child was screaming a lot and you weren’t doing anything about it, in which case it seems like a fairly reasonable message to send.”

And a third wrote: “If my 7 year old started screaming in public we’d go home immediately. If your sister has felt the need to message you about it, it’s obvious that it’s hit a nerve with her and your mother?”

Another mum added: “She’s right! Screaming isn’t an appropriate method of communication in general! Why is she screaming?”

While one said: “A 7 yo who has her own phone and who screams to get her own way? Yikes. Listen to your sister, she’s only said what everyone else is thinking.”

“What’s rude about it?” another parent asked of the message. “Your sister has clearly tried to word it as politely and cautiously as possible.” 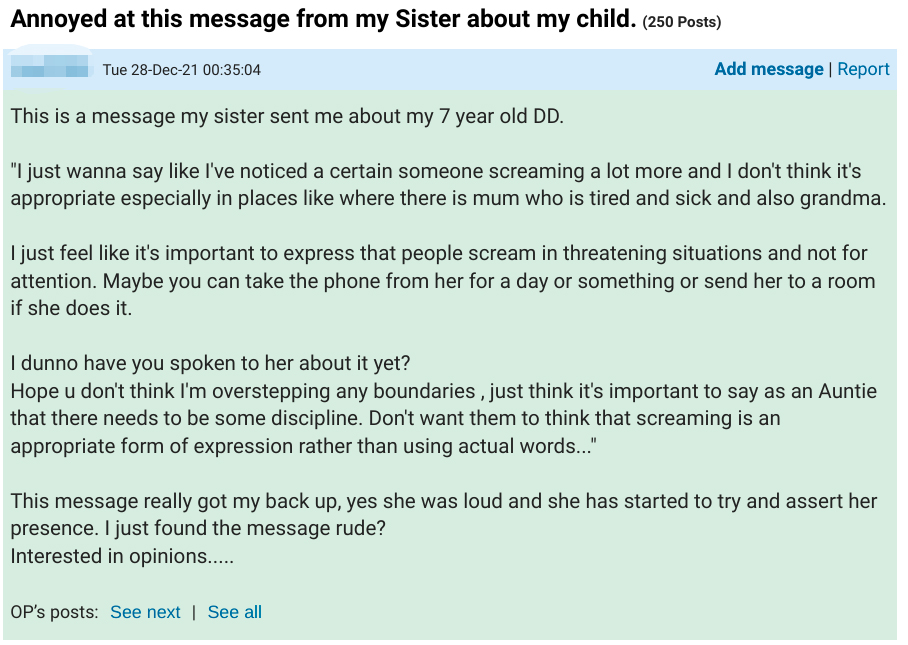 But many felt the message was appropriate and had been ‘politely’ wordedCredit: Mumsnet

While some suggested the mum was “in denial” and might even need parenting advice.

One said: “Could you go on a parenting course? They can be widely available and really benefit children.

“Honestly it sounds like you would really benefit from some guidance.”

And a second said: “Don’t be in denial OP (original poster) nor take offence at someone who loves you and your DD (dear daughter) trying to help.

“You won’t be doing your DD any favours by allowing the behaviour to continue.

“Sounds like you’re being defensive. Kids push and push, it’s up to you to see a line and provide discipline. It will serve her well as she grows up.”

Top Steam games of 2021 include Halo Infinite and Battlefield 2042