Mum proudly shows off 12 perfectly prepped lunchboxes for the week

NOT only is it mind-numbingly boring, but we also find packing our kids’ school lunch boxes pretty stressful.

How can we squeeze in the key food groups? How will it compare to their mates’ lunches? What if they refuse to eat it? The list goes on…

The mum makes her kids’ lunchboxes in bulk so mornings are less of a rushCredit: Facebook 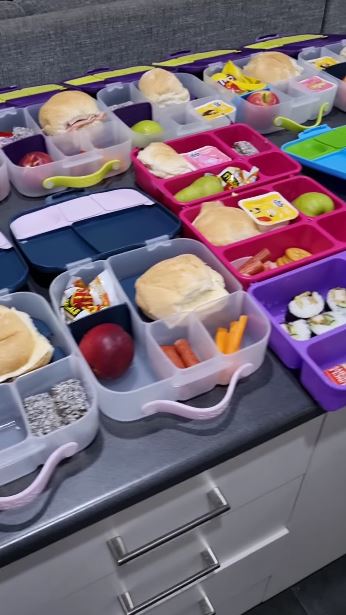 People were amazed the food stayed fresh for so longCredit: Facebook

So in an attempt to tackle this nightly chore all in one go, savvy mum Claire decided to prep her kids’ lunchboxes for the entire week.

Posting on the Facebook group Lunchbox Mums, the Australian parent said rushing to pack the lunchboxes had previously been a “trigger for panic attacks”.

As the family all have to leave the house at 7am, Claire has found making them all ahead of time is the best approach as it means she can go to sleep knowing that everything is sorted in the morning.

She wrote: “My kids are MY top priority. I include them in this process so they are able to make decisions on what they would like to eat.

“I also individualise them to suit each child whilst balancing a healthy variety.”

Sharing footage of their 12 lunchboxes, the kids have an assortment of sandwiches, sushi, crackers, crisps and fruit to get through in a week.

Broken down into different sections, each child either has sushi or bread roll as their main and then carrot sticks of yoghurt, biscuits or breakfast bars to snack on.

Explaining how the lunches are kept in the fridge when they get to school, Claire added: “‘I send fruits with a shorter lifespan first, by mid-week its fruits like apples.”

The post prompted hundreds of “likes” and comments from other members of the group.

“Well done for finding a way to make your week work best for your family,” one gushed.

“Amazing,” another added. “You would be surprised what stays fresh for the whole week.”

That said, others were sceptical about how practical this approach is.

A third said: “I couldn’t do that. Most of those foods would be yucky and not fresh. I would maybe just put in the packet food then add the other stuff the night before.”

Meanwhile, a fourth wrote: “It’s great to be organised, but only takes me 2 mins to chuck together lunch in the morning or before bed.”

In more parenting news, this mum-of-three tries to ‘normalise’ not cleaning her toilet for a MONTH, but trolls demand she ‘do to better for the kids’.

And this woman’s boyfriend didn’t let her pick her baby’s name – he thought her suggestions were weird but she loved them.

Plus this woman uses her breast milk to keep her teeth white, her skin clear and her hair healthy – she even drinks it to give her more energy.

Punter turns 72p into £2,650 thanks to ‘muggy acca’ that somehow found six straight winners at Kempton