SHARING a room with your siblings as a kid can be pretty fun, but let’s face it, everyone needs their own space from time to time.

One mum was desperate to find a solution for her three girls, who shared one very small room – and managed to find a way to redesign the area giving them each the space they need. 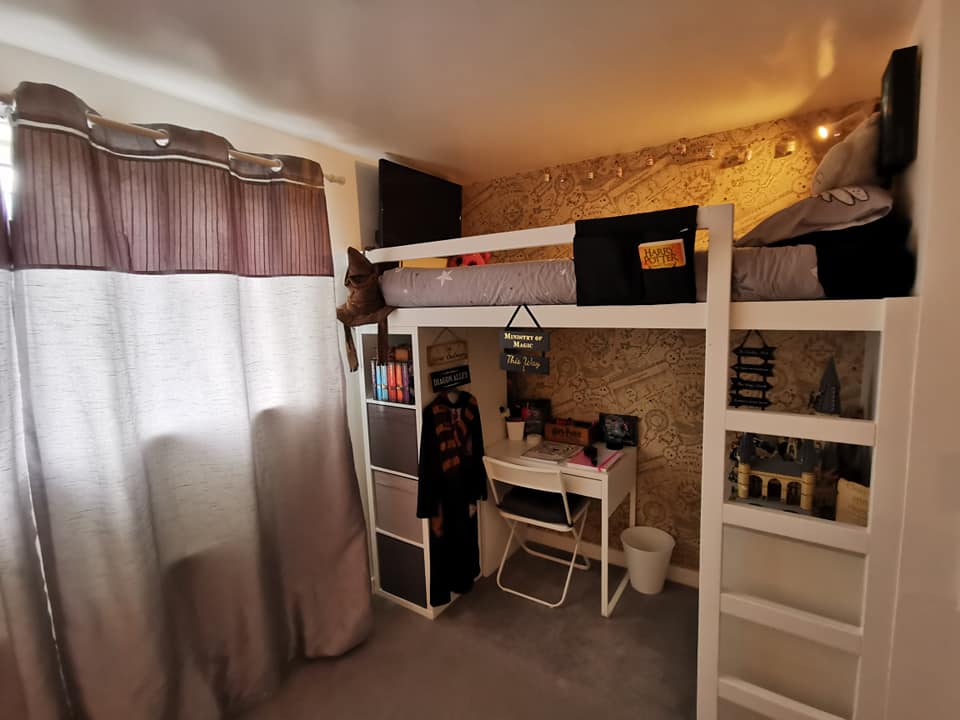 One side of the room is Harry Potter themed with a single bed and plenty of storage Credit: Rachael Lowe

Sharing the new look online, Rachael Lowe explained they’ve always struggled with space and storage in the room, and has spent ‘hours trawling Pinterest’ to get some ideas.

Finally, after running the ideas past her partner, the pair got to work on the stunning new look and the result is incredible.

On one side of the room, which is Harry Potter-themed, is an elevated single bed, with a desk and plenty of storage underneath.

The other side of the room has a modern take on bunk beds, complete with cubed storage units, a side table and a wall-mounted TV for movie nights – littered with 101 Dalmatians. 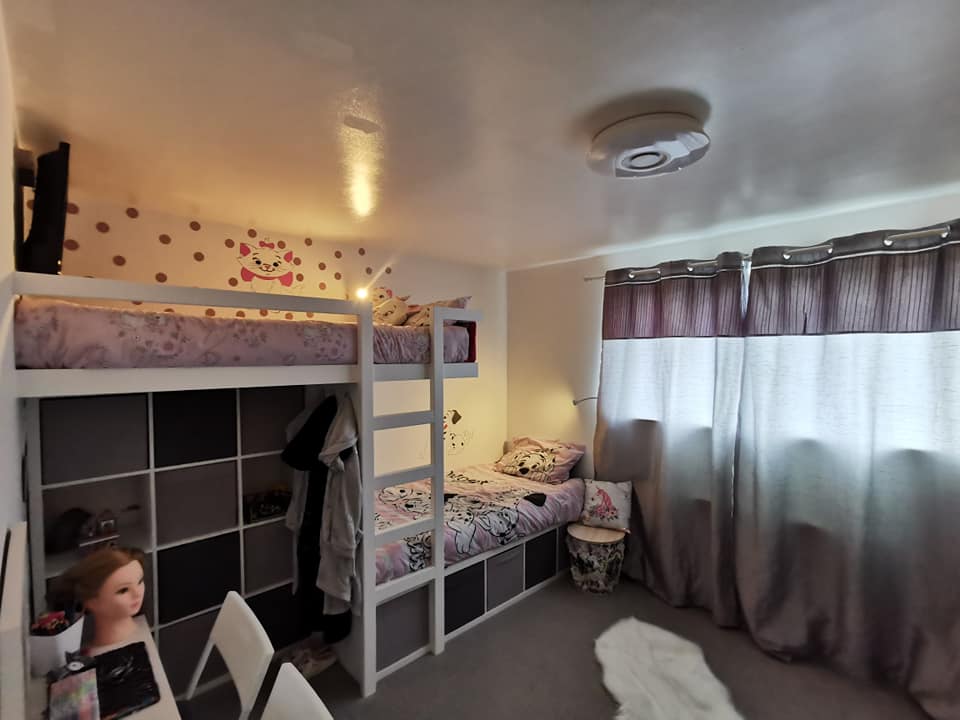 The other side has modern bunk bed and covered in 101 Dalmatians with extra storage Credit: Rachael Lowe 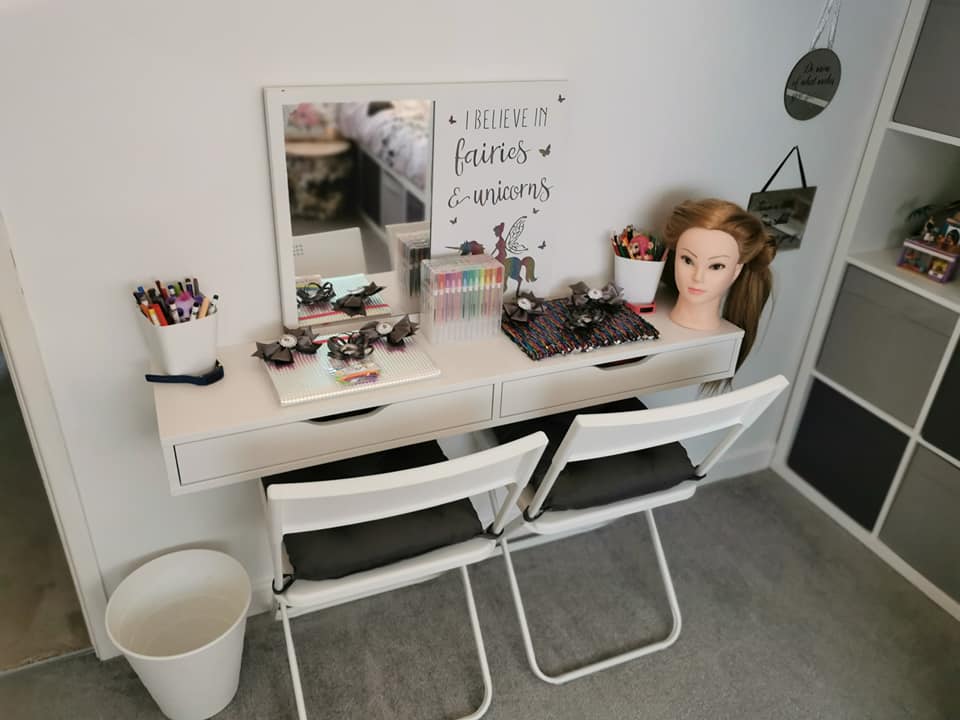 Every wall, corner and inch of floor has been utilised to maximise the space without it looking cramped.

The custom-made beds allow for plenty of extra space so the family were even able to pop in a dressing table and STILL have the room appear big and open.

The new bedroom design won over an army of fans in the DIY On A Budget Facebook group, and the crafty mum was forced to reveal more details about the room.

She wrote: “Harry Potter wallpaper was from Wilko and it glows in the dark. All of the beds were custom made by my partner using 3×2 wood and Mdf and hours and hours of sanding and painting. 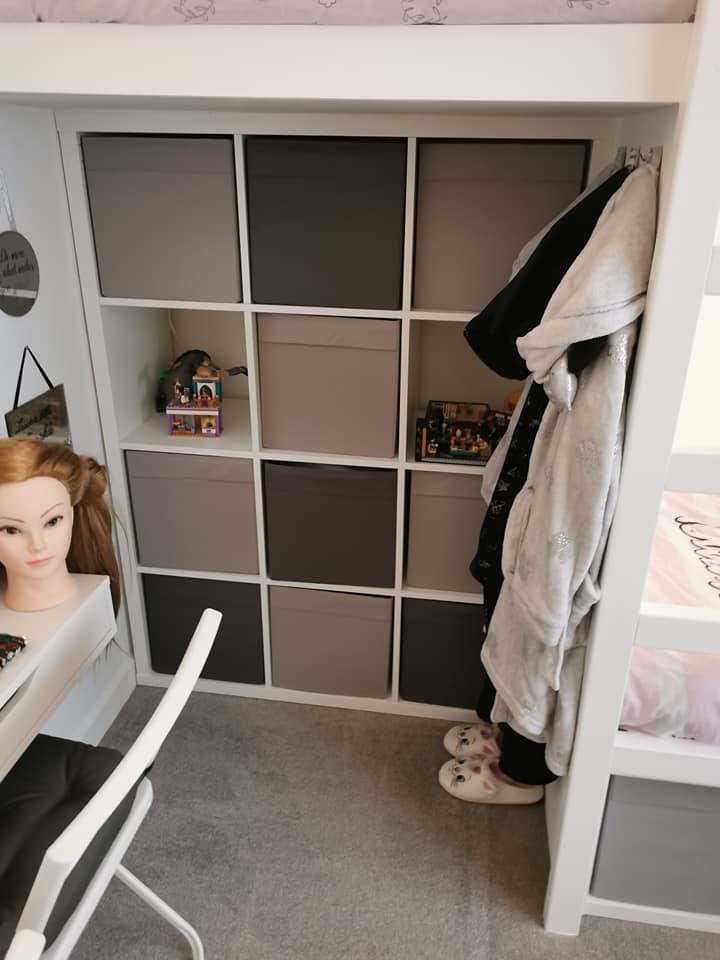 The storage cubes fit nicely under the bedCredit: Rachael Lowe 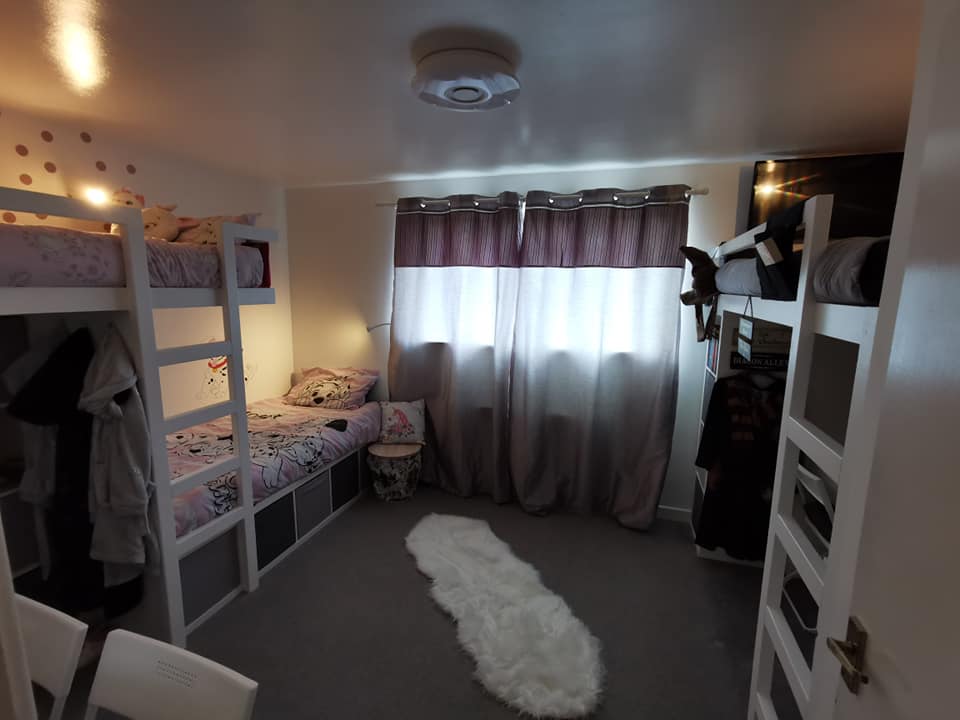 There’s so much open space with the new designCredit: Rachael Lowe 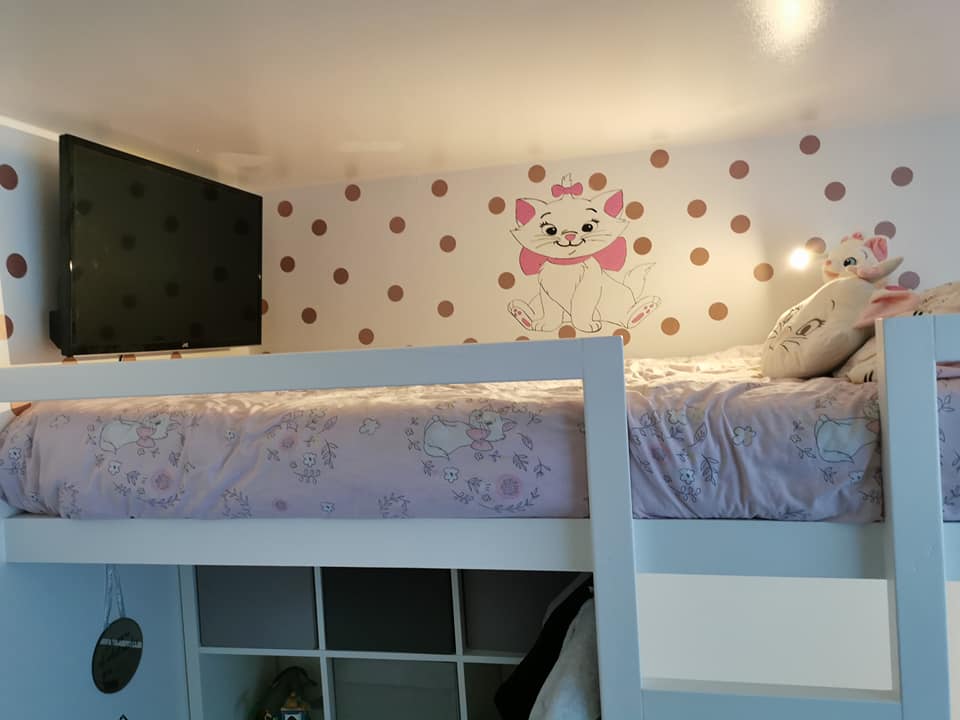 There’s even a TV mounted on the wallCredit: Rachael Lowe

“The units with the draws are Ikea Kallax with Drona boxes. The bottom bed base is made using 2x 4 unit Kallax and 2x single Kallax so when the front drawers are pulled out there’s another row of them behind for added storage.

“The desks are from Ikea the small one is called Micke and the large is Ekby Alex. Chairs were also from Ikea.

“The Dalmatian and Marie were drawn by me using a projector and hand painted. Rose Gold polka dots were from Amazon and I’m still waiting for Dalmatian spot stickers to arrive from Ebay.” 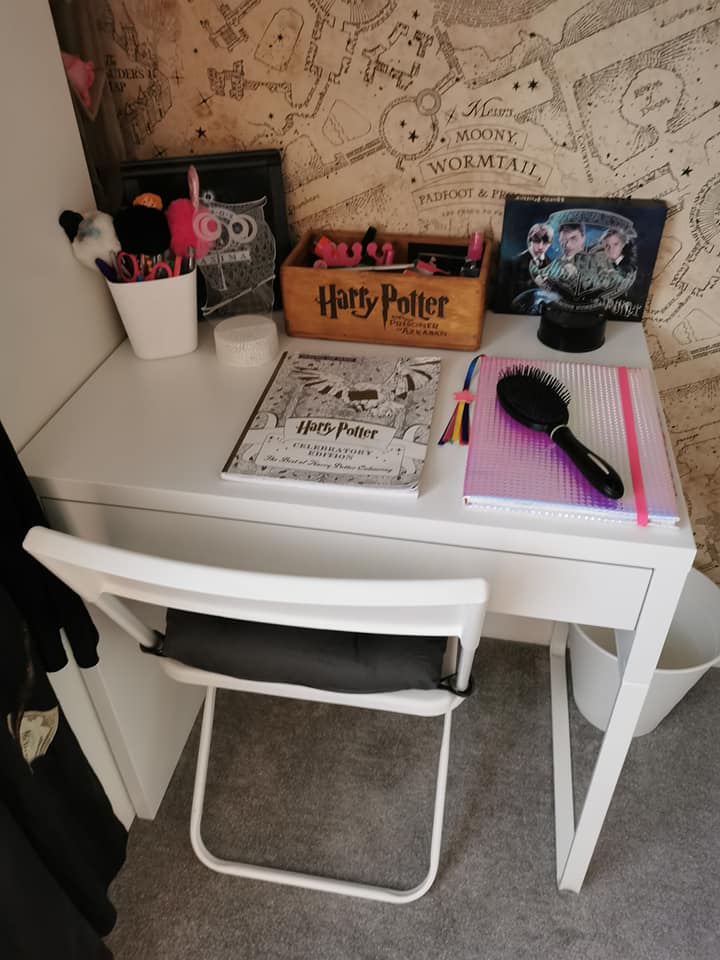 The room fits a desk tucked away nicely under one of the bedsCredit: Rachael Lowe 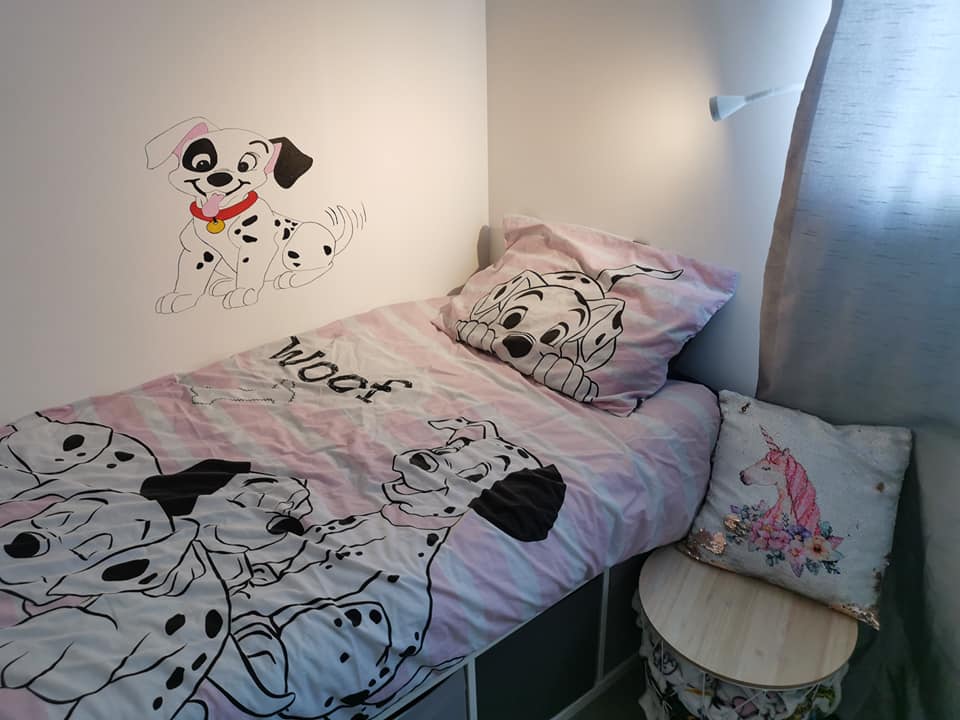 They each have their own bed and space Credit: Rachael Lowe 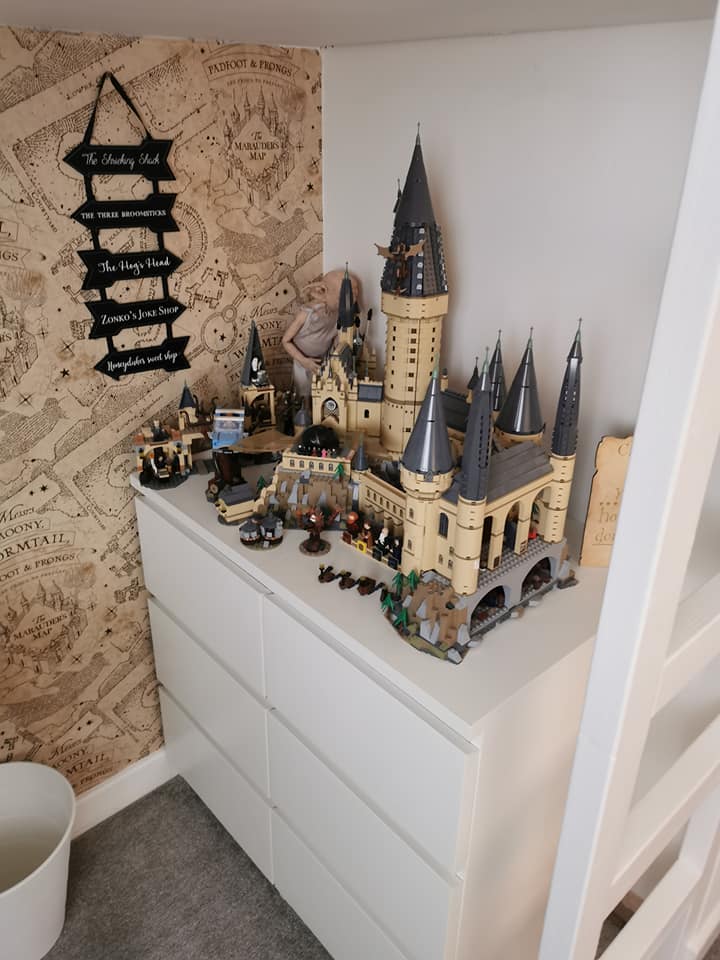 There’s plenty of storage room now, and even has an amazing Hogwarts displayCredit: Rachael Lowe

Her post has racked up 2.5k likes, and hundreds more comments from eager DIY-ers praising their efforts.

One wrote: “Fabulous use of space!!!”

While another shared: “Absolutely amazing – take my hat off to him, he done good.”

With a third adding: “Wow! That is an amazing use of space.”

While many complimented the use of space, others loved the idea of having two themes, making it comfortable and appropriate for all three girls.

Others dubbed the space “brilliant” and “creative”, while some loved the idea for their own kids rooms.

With a fun new space to hibernate in, we bet the girls aren’t going to want to leave.

We also shared how a mum-of-three whose kids shared a ‘tiny’ room gives it a space-boosting makeover thanks to TRIPLE bunk beds.

Plus a thrifty mum uses bunk beds to split her daughters’ room in two so they can both have some space & it’s an instant hit.

And a savvy mum who was sick of daughters’ constant arguing turns one bedroom into two by building her own WALL on the cheap.

Brits must fill out and submit forms TODAY or risk £1,000 fine as deadline hits