LIVING in a ‘small’ three-bedroom house with five kids under eight sounds like the definition of chaos for many people.

But that’s the reality for one mum who was forced to streamline her day-to day by putting a number of systems in place – and while it might seem a lot for some people, she says ‘when things are well-organised, life flows more smoothly’. 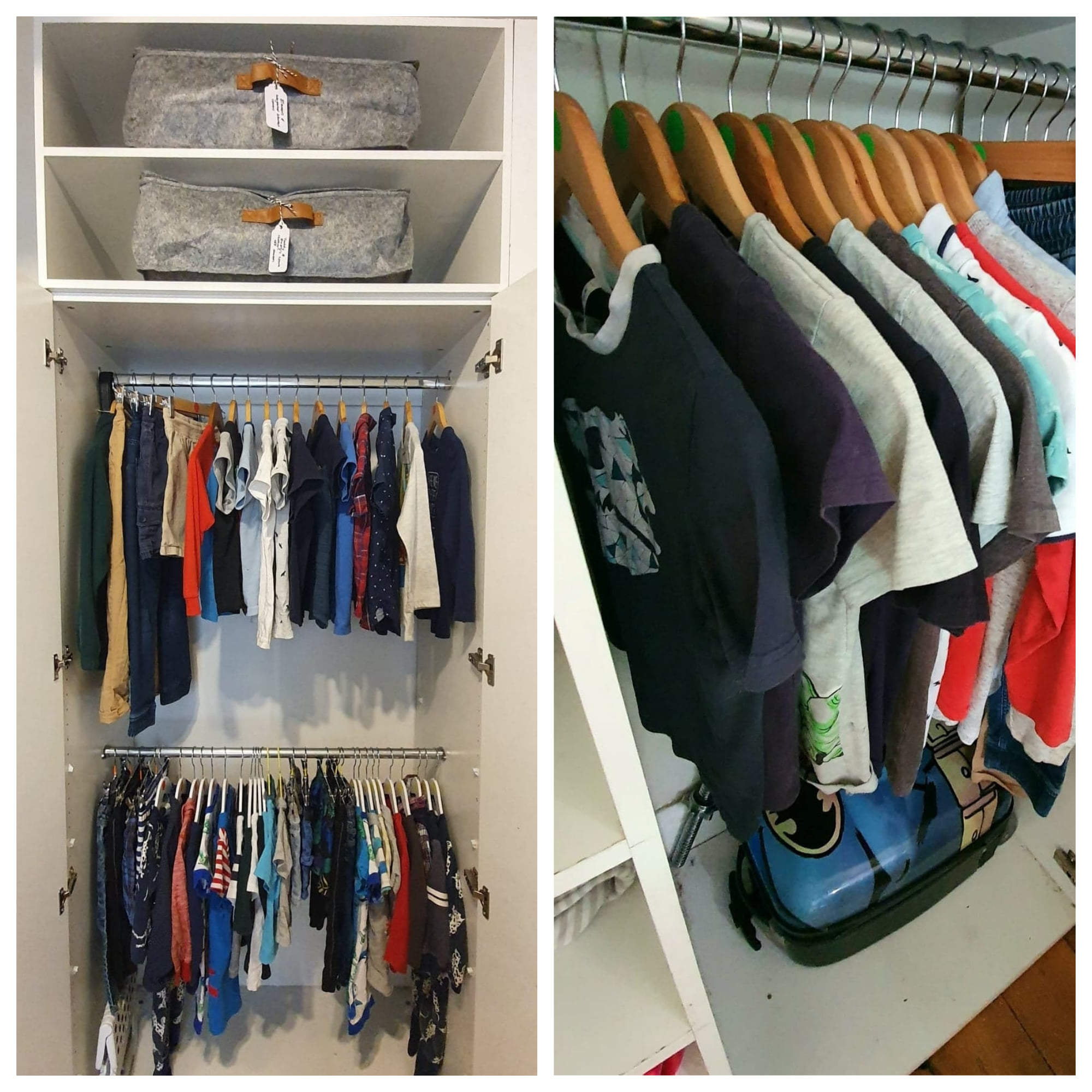 With five kids under eight, the mum has started using capsule wardrobes and a colour-coded system to stay organisedCredit: Facebook

So what are her secrets you ask? Well, the busy woman – who has five boys under eight, including two sets of twins – has shared her organisational tips online in a bid to help other mums keep their home tidy.

She admits that while it might seem like a lot at first, there are many benefits to having a ‘minimalist approach’ and by staying on top of things around the house, it’s easier on her entire family .

She wrote: “People say to me that they don’t know how I can be so organised with so many little kids, when the reality is I can’t afford not to be organised.

“All this might sound like a lot of effort, and it is initially. However it has some important benefits. Leading onto the first major benefit: the kids can dress themselves. 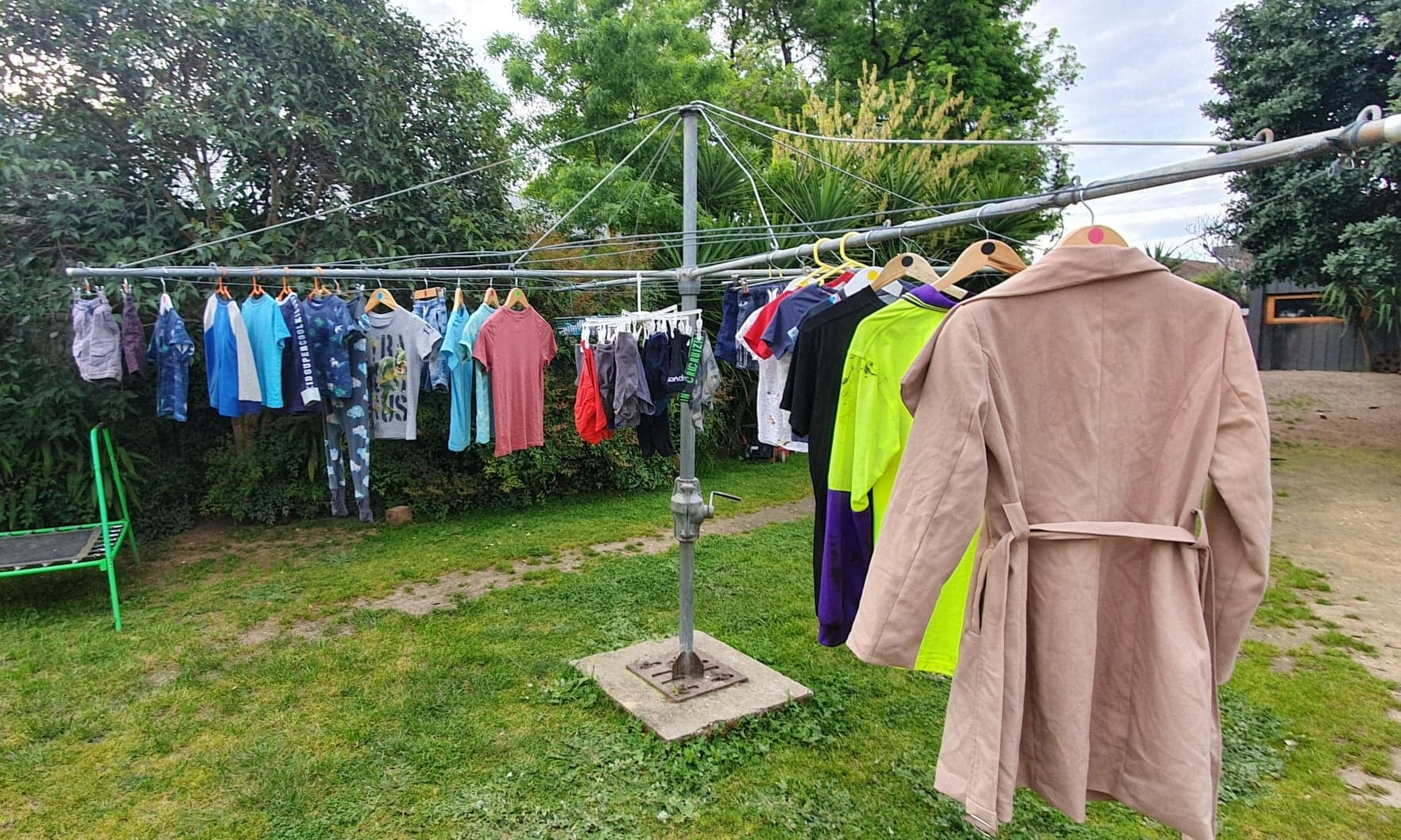 She hangs everything straight from the wash so no folding is necessaryCredit: Facebook

“Having a setup that is easy for kids (and husbands) to navigate means they do more independently. I’m a high school teacher and my 7yo twins are more capable and independent than some 14 year olds I’ve met.

“My older twins can now get up, get dressed and find their belongings for school because I have a good system for them. For me this means less crazy early morning running around and a few more minutes precious shut eye as I’m not a morning person!”

She also added that her approach teaches her boys ‘organisational skills’.

“It’s a work in progress of course, because none of my boys are what I would call neat, but they’re on track to be adults who know how to function well (hopefully lol).” 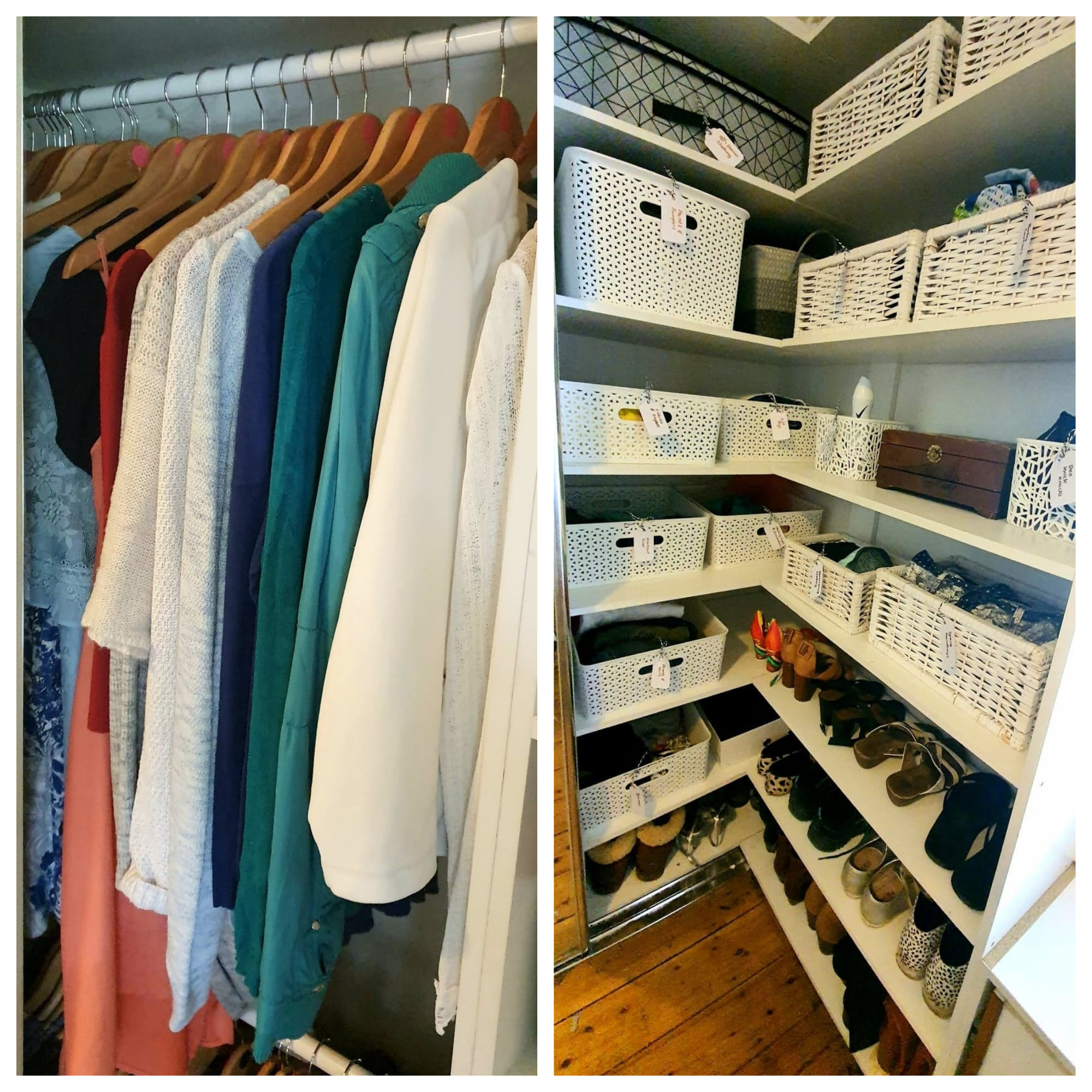 Having less clothes means less washing and it’s easier for everyone to get dressed in the morningCredit: Facebook

And added: “Ultimately, it saves me time, work and stress to be well-organised. I hope these tips are useful for others in organising clothes with kids.”

1. Keep it minimal and hang everything

The Aussie mum said that having twins first made her become more organised, but said when her third son was followed by a second set of twins she knew she had to ‘level up’ .

She said: “I’ve always been fairly minimalist with the kids clothes. Recently I’ve become even more so. Surprisingly, it’s easier to get dressed with less wardrobe crowding as it allows you to see what is there.

” I used to KonMari fold the kids clothes but I found that they’d mess it up right away rifling through looking for things, so now I’ve mostly moved to putting the bulk of their clothes on hangers.”

Hanging clothes makes it easier to see what you’ve got in your wardrobe and to see each item of clothing. Provided you’ve decluttered and you’re only hanging in season clothes, picking outfits becomes a breeze. 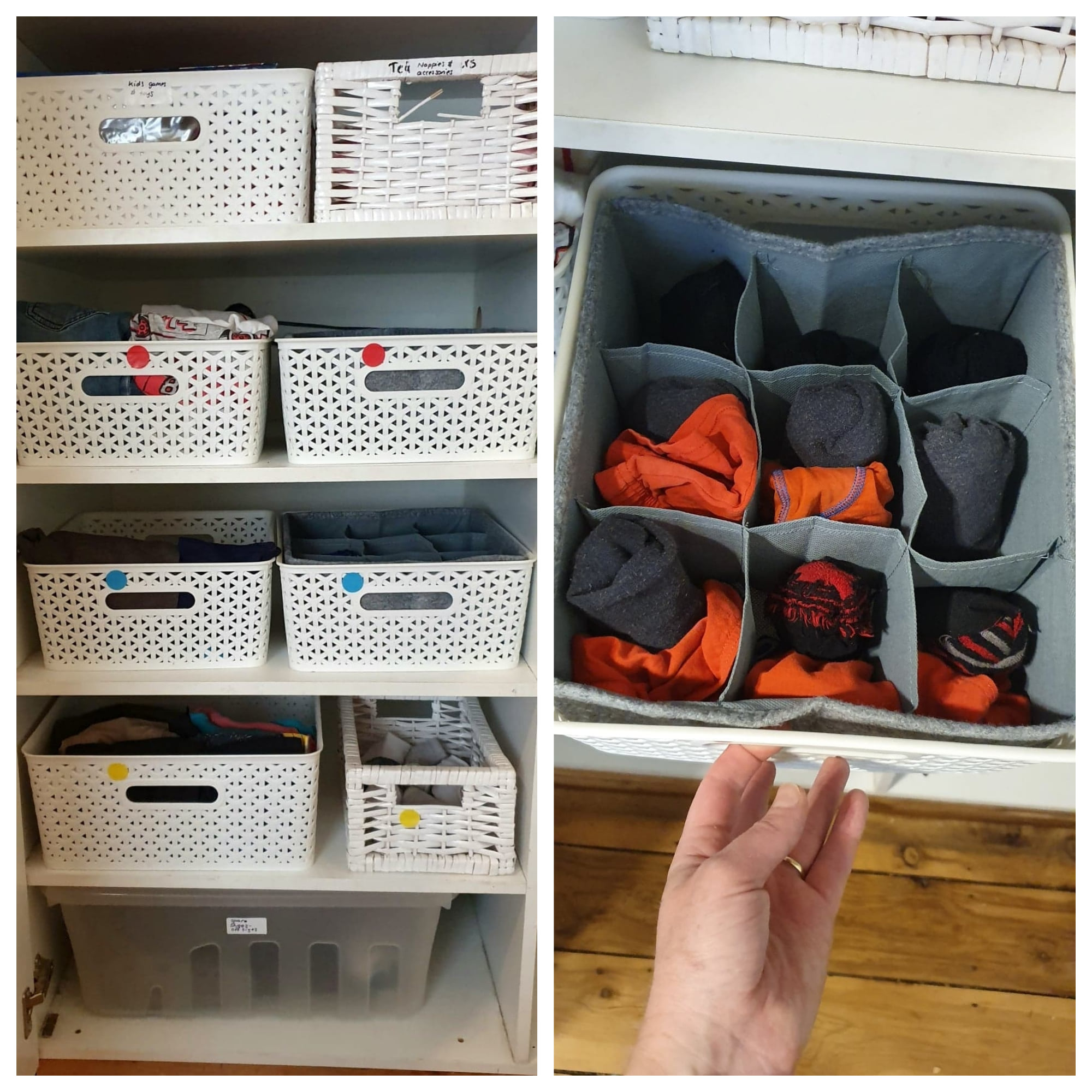 Each child has a colour and she stores their socks and undies accordinglyCredit: Facebook

She said: “My 7yo boys have already complimented the hanging wardrobe system, they are already finding it easier to dress themselves and find what they need.”

She also suggested using wooden hangers because they’re thicker, which automatically spaces your clothes out more, making it harder to cram your wardrobe over full.

Having a capsule wardrobe – a strategic approach to having only essential clothing items that all work together – for each of her kids means reducing the time spent on sorting out what to wear and in turn the amount of washing needed.

She revealed that for each of her kids she’ll have a small warbrobe consisting of five outfits for both winter and summer, five transitional outfits, five sets of PJ’s in total and five pairs of shoes.

What her capsule wardrobe consists of

Plus one of all essential items including a hat, swimmers and a raincoat.

Plus one of all essential items including a hat, swimmers and a raincoat.

The organised mum also suggested steering clear of print pants or shorts. With fewer items of clothing overall, she said you want everything to go together. So sticking to plain bottoms means most tops will go with most bottoms.

3. Declutter and reduce the amount of stuff you have

She said to start by packing away in between sizes that are too big or too small.

She wrote: “I don’t know about other people’s kids but my 5yo will wear anything from a size 3 to a size 6 if he can access it! So I have to make sure all unused sizes are packed away in tubs and stored up high.”

She said the best way to declutter is to get the kids involved.

“I find they’re actually really good at deciding which clothes bring them joy,” she said.

“My boys tend to wear the same few outfits over and over, so having fewer outfits works well for us. Not to mention kids grow fast, so their wardrobe changes each season. 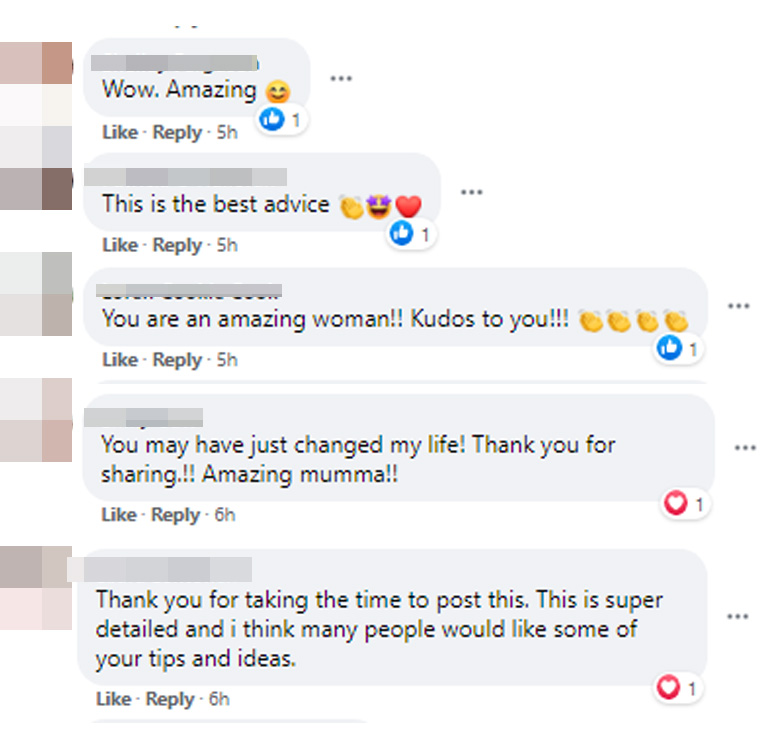 People online were seriously impressed and were thankful for her tipsCredit: Facebook

The mum-of-five said she picked up some coloured stickers and added them to wooden hangers – giving each family member their own colour.

She said: “Colour coding makes it easy for kids to manage their own belongings, leading to more skills and independent kids.”

When the Aussie mum does the washing, she’ll hang it straight on the colour-coded hangers making it easier to put away – and it means no folding whatsoever.

She said : “Before bringing the washing in, I collect the empty hangers from the wardrobes, hang each item on the hanger and pop the hanger on the clothesline.

“Socks and jocks go on a special sock hanger. It takes a little longer to do this when hanging out the clothes; but much is gained at the other end!

“At the end of a very busy day wrangling twin toddlers when my energy is flagging, I can grab the hangers off the line and pop them straight into each person’s wardrobe, no need to fold or hang. Winning!”

Vote in our Good Influence Awards and win £500

Fabulous is launching its Good Influence Awards to celebrate women using their platforms for good, turning social media into an empowering space.

To be in with a chance of winning £500, vote for your faves before 11.59pm on Sunday September 20 to and help us decide the shortlist.

The winners will be selected by our judges Maura Higgins, Katie Wallwork and Nana Acheampong.

What are you waiting for? Get voting!

In other parenting related news, a mum-of-two shares her extremely detailed weekly house organiser – and busy parents love the idea .

And busy mums share the easy ways they get the housework done in half the time… & how to trick the kids into helping.

Plus we shared how organised mums have breezed through back-to-school panic with labelling and lunchbox prep.