A YOUNG mum has shared her story on TikTok about constantly getting ”dirty” looks when she doesn’t wear make-up while taking her baby for some fresh air.

The 22-year-old uploaded the video on social media, where it’s already been seen by more than 111,000 users.

The make-up lover shared her experience on Tiktok claiming she now rarely leaves the houseCredit: TikTok/@lucyannemakeup

According to her, whenever she goes out for a walk in comfortable joggers and a sweatshirt, bypassers give her dirty looks.

The TikTok mum speculated it could be because she looks very young when not wearing foundation and other make-up and the short height doesn’t help either.

However, it was then revealed that it’s a completely different story once she gets ready, wears make-up and a more dressy outfit.

”People stop and chat to your about your baby, people smile and be nice?”

It appears that this is a common issue amongst mums, as others told the same story.

”Yep, but my partner can dress however he likes when he has the baby and people don’t bat an eyelid cos he’s a bloke.”

Some mums didn’t think it was that much of a problem, with one writing: ”Yes & that’s why I continue to look rough when I go out, don’t want anyone to chat to me.”

”It’s really sad that people judge so much.”

Plus, a woman has shared her story to TikTok about being a young mum, as people often question her for being ‘too young to be a mum’.

Also, this mum shares easy way she gets her toddler in the trolley when food shopping and other parents brand her a genius. 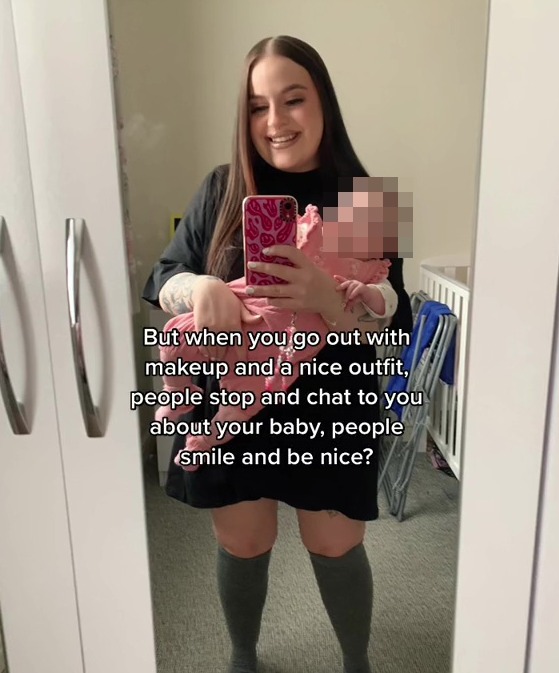 Other mums claimed she wasn’t the only one and that dads have it easierCredit: TikTok/@lucyannemakeup

More than half of Europe to catch Omicron in next two months, WHO warns

My husband says I don’t manage my time properly so he’s presented me with a chore rota, I’m fuming

We gave our son a unique name