TEACHING kids to speak can be a tricky task, but a mum claims there are three simple steps to them learning ANY word.

A mum on TikTok, who posts under @montessori.mothering, uploaded a video on her three-step trick. The first step is to repeatedly say the name of an object as you hand it to them or point it outCredit: @montessori.mothering/Tiktok

She wrote: “The Montessori way to teaching your baby their first words using the three period lesson.”

Montessori parenting follows the 100-year-old education system of Maria Montessori which aims to give children the chance to become independent much earlier.

The first step to teaching your child a word, she claims, is to hold an item and say the word repeatedly.

In her video, she holds up a figure of a pig and tells him the name of the animal over and over.

The next step is to ask her child to show them where the item is, and she filmed asking him to pick out the pig among a selection of farm animals.

She explained: “If they choose the wrong animal, don’t correct them.

“Name the animal they choose.”

She added: “You don’t want to discourage them. It’s meant to be fun and positive experience.

“If they picked up the horse instead. Just say that’s the horse.”

The final stage is to ask them to name the object or item you have taught them.

In the clip, she asks her son “What is this?” when he is holding the pig.

The mum added: “Don’t try this until you are sure baby knows the word.”

She commented: “You can start with step one early on (5-6 months). But I don’t think moving on step two would happen until closer to a year.”

Her clip has racked up nearly 20,000 likes, and many parents said they would try it with their kids.

One said: “I love this especially because I’m in the process of trying to teach my son how to say mama or dada.”

Another added: “from a Speechie. Good job!” 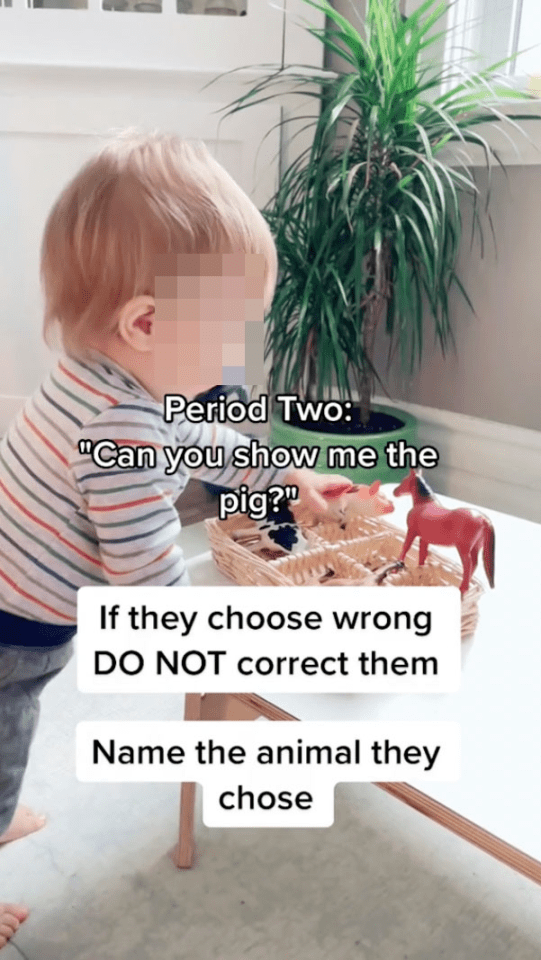 You then need to get them to select the object and show it to youCredit: @montessori.mothering/Tiktok 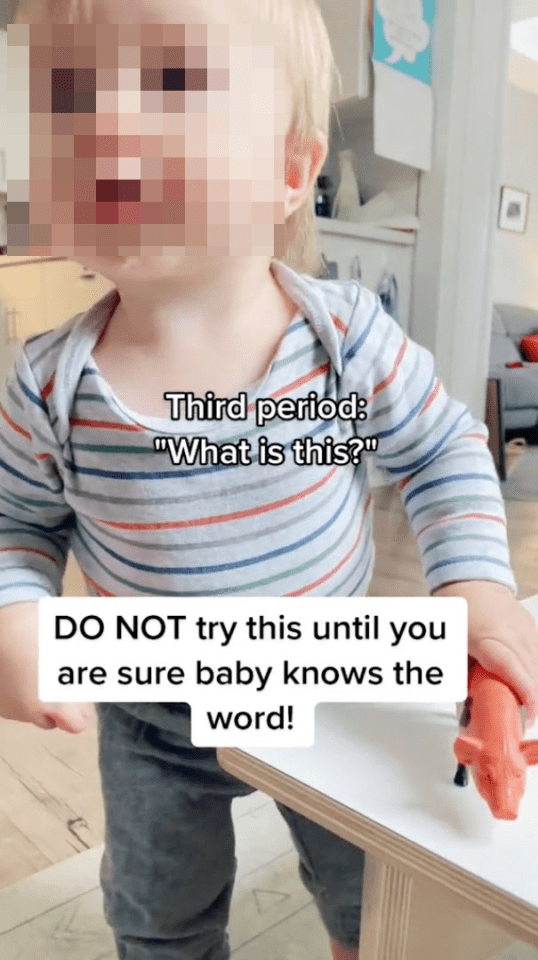 When you are sure they know the word, ask them what the object isCredit: @montessori.mothering/Tiktok

Meanwhile, a child expert reveals 8 things you should NEVER talk to your kids about.

And a nursery worker says what they REALLY mean when your child’s been ‘exploring the room’ or they mention ‘listening ears’.

My breast milk went GREEN after I got covid

I let my baby drink TEA

My husband says I don’t manage my time properly so he’s presented me with a chore rota, I’m fuming