A YOUNG mum has revealed that people often mistake her for being her daughter’s sister not parent.

Ruby Whitaker, from Georgia, shared the video on TikTok, where it’s gone viral, racking up a staggering 4.4 million views.

When she announced the pregnancy, many said she would regret thisCredit: TikTok/@rubyselena123

According to the 21-year-old, who became pregnant with her daughter at 19, by-passers and strangers would often say: ”Your little sister is so cute.”

She said that they would be in shock upon finding she’s the mum, not a sibling.

Ruby, who also revealed that her friends and family said she would regret the pregnancy, added that people staring at the two is not uncommon – it’s ”what being a young mom is like”.

Unlike her young friends, who are out and about all night, the 21-year-old claimed she’s usually in bed by 9pm most evenings, as her daughter, Zaelynn, has exhausted her.

The TikTok-famous mum – she has over 140 thousand followers on the social media giant – regularly posts videos of the two sharing emotional mother-daughter moments.

”Been there – it eventually fades ❤️I always just said “I’m lucky I get to love them longer!” ”

Another added: ”I had my first child at 33… I feel like I missed out on so much fun” before urging to enjoy the time spent together.

”They grow up too fast.”

”I had my daughter at 16 & now I’m a grandma… I absolutely love being a mom,” shared another parent.

”Girl anytime I go somewhere with my daughter they ask her if her big sister babysits her alot,” said a mum.

” You both will live for it when she’s older…I swear!”

In other parenting news, a mum has shared her story about constantly getting ”dirty” looks when she doesn’t wear make-up while taking her baby for some fresh air.

Plus, a pregnant mum has gone viral after sharing a video of her unusually large bump.

Meanwhile, this mum shares easy way she gets her toddler in the trolley when food shopping and other parents brand her a genius. 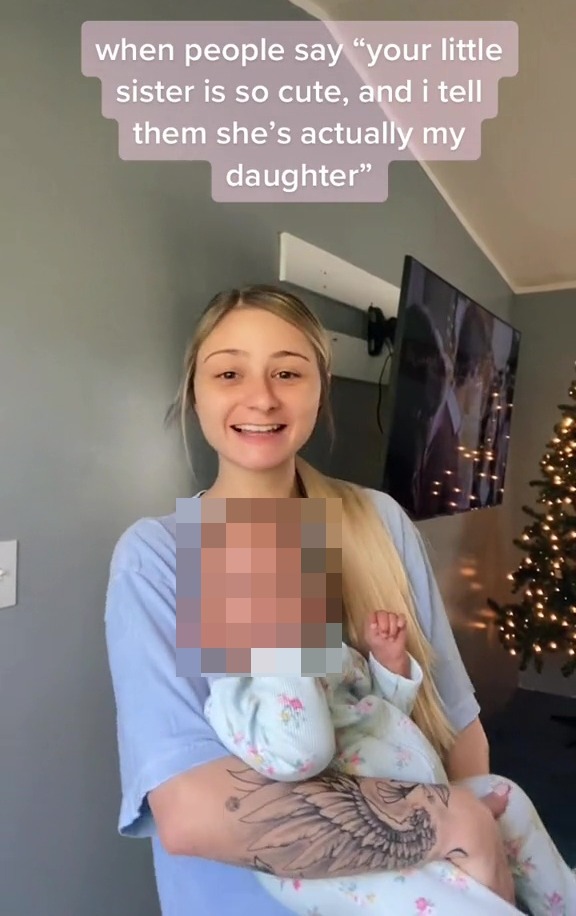 Ruby became pregnant with her daughter at 19Credit: TikTok/@rubyselena123