A MUM looking for advice on how to stop breastfeeding her two-and-a-half-year-old son was trolled by users online.

The woman called Kaylee posted a video to her TikTok account, cupidkayleee, where it has been viewed over two million times, in the video, she asked mums how to wean her child off breastfeeding.

Kaylee shared a video asking for advice on how to wean her child off breastfeedingCredit: @cupidkayleee/Tiktok

The 21-year-old mum is believed to live in California in the US, and works as a server in a restaurant to provide for her and her son.

Kaylee captioned the video: “please comment suggestions on how to get a 2.5 year old to stop with da b00bs.”

In the video, she wrote: “what it is like to have a toddler who still breastfeeds.”

Kaylee shows herself sitting in the car whilst her little boy keeps trying to get to her breasts so he can be breastfed.

She asks her son to wait, to which he just continues to try and burrow his hand into her top.

Whilst some mums offered advice on how to wean babies off of breastfeeding, others trolled the mum for still breastfeeding her kid.

One user wrote: “This is just nasty, tell him no. Can’t tell me a two-year-old has power over you.”

To which Kaylee responded in a video saying: “What the f**k do you mean this is just nasty? You’re nasty.”

Another user commented: “He is too old for that.”

“Bro, he was supposed to stop like a year and a half ago.” Claimed another.

Whilst there were some who trolled Kaylee for still breastfeeding, there were plenty of mums rallying around her and showing their support in the comments.

“This is a cute and funny video. For y’all sexualising a mother and child’s bond, it is ridiculous. HE IS A BABY.” Wrote one user.

Another person commented: “Most of you still breastfeeding cows and this is where you draw the line?”

A third person replied: “Say they are broken and put band-aids on them.” 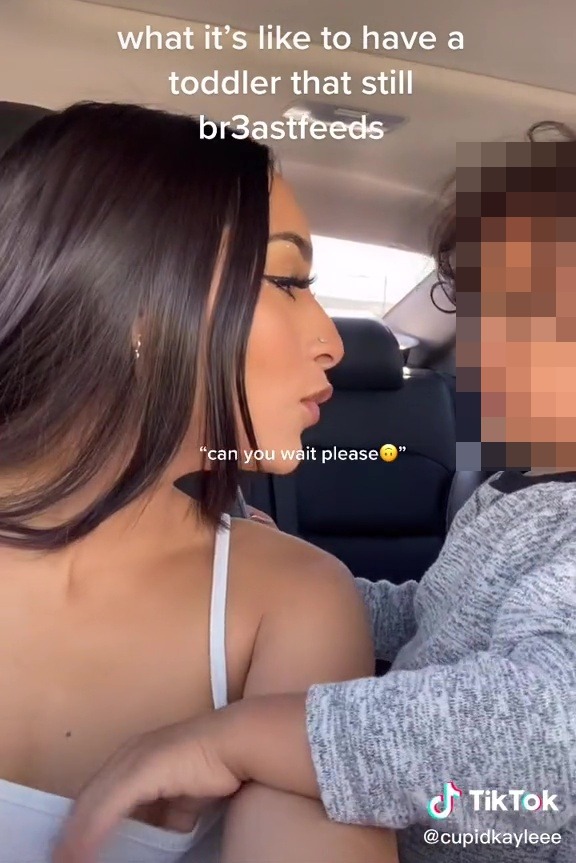 Some mums advised putting salt on the nipples or covering them in plastersCredit: @cupidkayleee/Tiktok

Plus, one mum reveals she makes butter with her breastmilk and that even her husband eats it.

And, a teacher reveals where teens hide things they don’t want their parents to find.

Meanwhile, a mum reveals she didn’t cut the placenta off her baby and let it fall off naturally, she used a pillowcase to protect it.

I regret having a baby so much, I’m a shell of my former self & wish I could go back so my son never existed

My parents bought me a baby for Christmas

My FIVE-year-old still sleeps in his cot

Grandma Asks For Two Thirds Of Daughter’s Salary To Babysit Her Grandson, Asks If That’s Wrong

People can’t believe the size of my baby