A SCHOOLGIRL tried to pull a sicky after cutting off her eyelashes and telling her mum that they had FALLEN OFF.

Harleigh, five, cut off her eyelashes at school 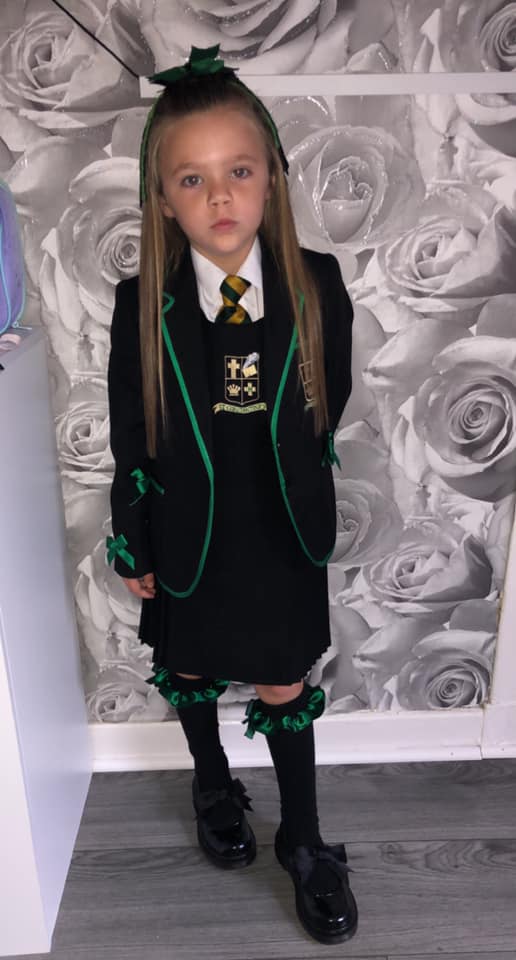 Mum Jolaine, 22, was mortified when she realised that her daughter’s eyelashes had a DIY trim.

With her mum furious at what she had done, the cheeky youngster claimed that they “fell off at school”.

Speaking to Fabulous, Jolaine said: “On Thursday, I told her to get up for school and she said that her eyes were sore.

“I thought she was just tired and it wasn’t until I was washing her that I saw that her eyelashes were cut off.

“I was so angry at her at first, I thought ‘you just started school but now you have no eyelashes.’

“She told me that they fell off in school.

“I have never heard anything like this in my life, cutting hair, I can understand that but I’ve never heard of anyone cutting their eyelashes.

“I didn’t notice Harleigh’s eyelashes until the next day but she obviously did it in school.

Jolaine told of how she was running around Braehead to try and find anything which would help grow back her daughter’s eyelashes.

After her initial reaction, she now sees the funny side to what Harleigh did.

Jolaine put a post on her social media about Harleigh’s antics which left her friends in stitches.

She added: “I put the post on Facebook and a lot of people found it absolutely hilarious. People were saying she’s a genius.

“At first I didn’t see the funny side to it and now I can’t look at her without laughing because it’s so noticeable.

“She’s hilarious, she’s got her own personality and is so sassy.”

In related news, a desperate mum asks for help with her 10-year-old daughter’s ‘trick’ maths homework but gets totally savaged in response.

While this desperate mum begs for help with her seven-year-old’s maths homework… and even a PROFESSOR can’t understand it.

And this mum warns parents to check their child’s homework after daughter used Google & ended up with some terrifying answers.

Cristiano Ronaldo to get Man Utd No7 shirt as Cavani ‘gives it up’, Trippier deal back on, James set for loan

Experts’ guide to baby must-have products: From prams and car seats to babygrows and breast pumps

Food, faith and family: how we feed our son his rich mixed heritage | Family

A tussle at nursery leaves our boy tearful… | Parents and parenting