A DIVORCED mum impressed fellow parents with a unique hack she came up with to help her child understand joint custody.

Separated families say they’ll definitely be using this super simple technique, which only requires a whiteboard and some markers. 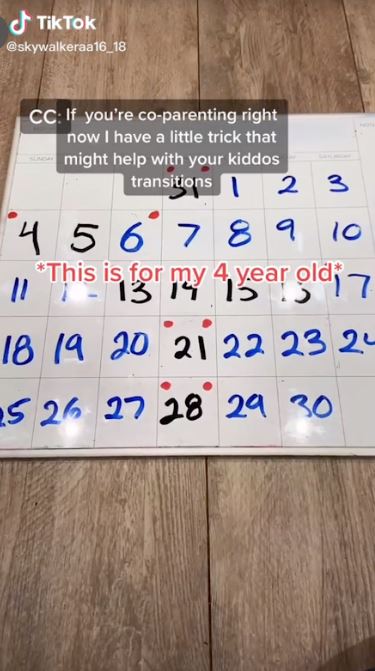 Mum Kinsey uses a whiteboard to show her daughter when she’ll see her dadCredit: @skywalkeraa16_18/TikTok

Mum and Tiktok user Kinsey said that she created the hack because her 4-year-old daughter “had been struggling with transitions” between her mum and dad’s houses.

In the video, Kinsey shows how she has been using a whiteboard as a calendar for her daughter.

She colour-coordinates the calendar to make it easy for her little one to understand. 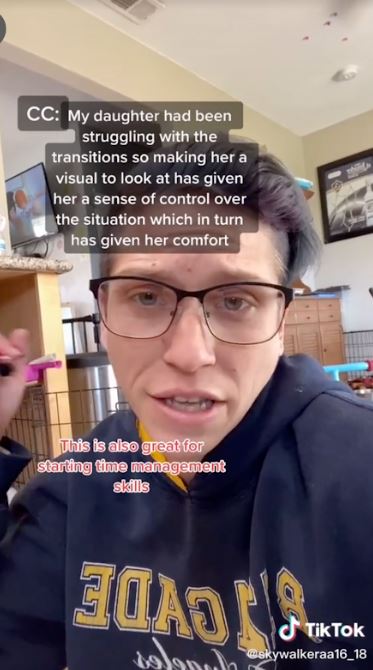 She says it gives her daughter a sense of comfortCredit: @skywalkeraa16_18/TikTok

The mum also uses red dots to indicate which days her daughter will be travelling.

She says: “And if there’s red dots, that indicates leaving and coming.”

This, she says, really helps her 4-year-old understand when exactly she’ll be seeing her father and for how long. 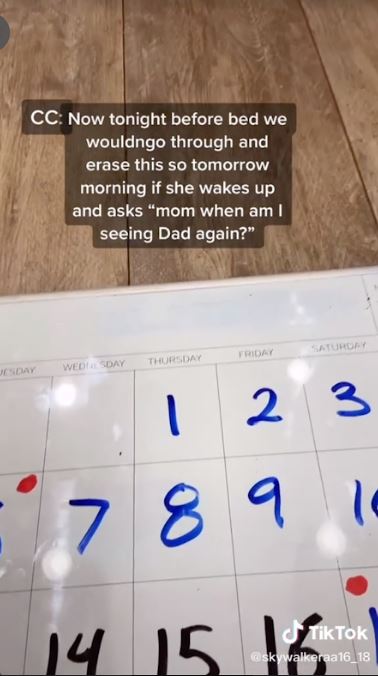 The board is colour-coordinated to help her daughter understandCredit: @skywalkeraa16_18/TikTok

She explains: “Tomorrow morning if she wakes up and asks, ‘Mom, when am I seeing Dad again?’, I can say ‘go look at your calendar’.

“She will go through and count, ‘one day, two days, three days, oh, I’m seeing my dad on the fourth day’. And she’ll know that sometime on that day she is leaving to see her dad.”

Because the calendar is depicted on a whiteboard, Kinsey can wipe off the days as they pass, so that her young daughter doesn’t get confused with which days have already passed.

Kinsey says that the visual aid has given her daughter a “comfort” because she now has a sense of control over the situation.

The video has racked up over 400,000 views and commenters absolutely love Kinsey’s idea.

One commenter said: “This is amazing.”

“That’s so smart, I love that”, wrote a second viewer, while a third said: “I really like that and I think I am most definitely going to be using this.”

We shared this organised mum’s five tips for keeping your kitchen cupboards tidy… and it’s time to buy a label maker.

Previously, this woman showed the easy way she budgets using a bargain Poundland buy and it only takes her seconds each day.

Meanwhile, this super-organised mum sets 12 alarms a day and arranges her daughter’s playtime with military precision.

Mum-of-four goes to extreme lengths to keep the kids entertained in the car, so is it a step too far?