Stunning, rural home in Sweden is top of the class | Interiors

When Jörgen Ahdrian Brorsson first saw his new home it was an antiques shop – indeed the lighting pendant that now hangs in the bedroom is a bargain he picked up on that visit. But the real find was the building itself, which he fell in love with and never forgot.

Two years ago, when he and his wife Sara decided to leave the hectic life of Stockholm behind, he knew this old school house, built in 1928, offered them the chance for the peace they craved.

Used as a school until 1963, the building had been through several different incarnations by the time they got their hands on it, including a church organ workshop, a B&B and a café. But Sara and Jörgen didn’t want to simply stamp their vision on the building, they also wanted to take care of it and renovate it in a style that was true to its history as well as their own particular ideas.

“We moved here in 2019 and renovated the whole house, making sure to preserve the unique school style as we did,” says Sara. “We stayed faithful to the era of the house and its art deco style, using that as the base, with added antique items and modern art.”

Located in the scenic area of Kullaberg in the Scania province of southern Sweden, the house is 10km from the town of Höganäs, built around a fishing harbour in an area known for coal and clay. The clay produced here was used in the manufacture of ceramics and the original tiles in the school – which Jörgen and Sara have left in place – were made by a local company.

Sara leads the way through the beautiful rooms and old classrooms, which have a welcoming feeling and soft atmosphere, despite the big spaces. The layout is similar to that of an ordinary house, with a hall, living room, kitchen – painted in a sumptuous black – and study, but on a grander scale because of the larger rooms and higher ceilings. 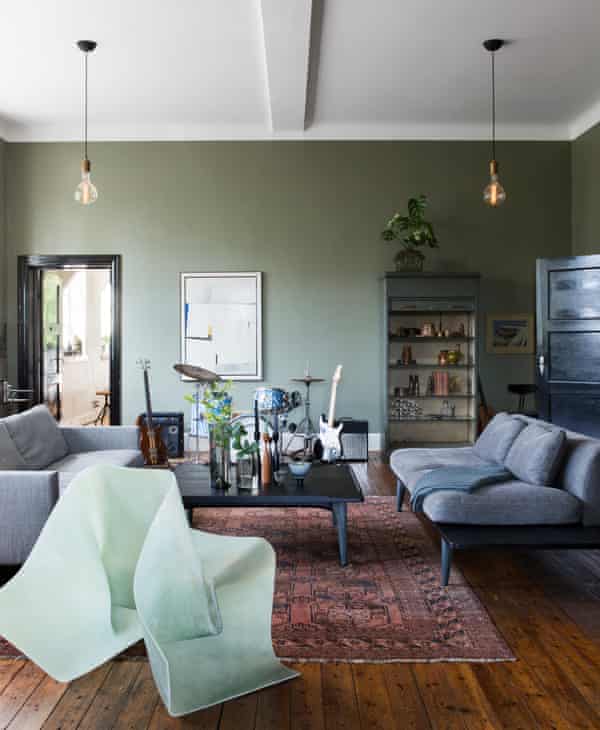 Mix and match: walls in Green Leaf by Jotun and a Fold chair by Olivier Gregoire. Photograph: Johan Sellén

The living room is painted in Green Leaf from Jotun and the light green Fold chair, from Olivier Gregoire, makes a striking focal point on the restored 1920s wood floor that has seen 40 years’ worth of schoolchildren tramping over it.

We walk up the staircase, along a corridor and down some steps half a floor below to the old gymnasium. It still houses some of the equipment used when it was a school, but it’s now a TV and table tennis room. Table tennis is the family sport and the table – a conference and dining table with a net strung across it – is actually from the couples’ own furniture import business. In fact, all the rooms have pieces from their business, Dunke Design, which was started five years ago after a holiday to Vietnam where, by chance, they discovered the local furniture company District Eight.

The handmade furniture is inspired by early industrial design and the first collections were made from recycled materials taken out of French colonial houses. The couple fell for the timeless design and sustainability, and decided to bring District Eight home to Sweden, where they formed Dunke Design to distribute it.

Things took off and, new to the furniture business, they found themselves in demand, working in their store in Stockholm during the daytime and delivering furniture in the evenings and at weekends, driving all over Sweden in their van. Sometimes, they were so busy they had to sleep in the store to manage the opening hours and keep up with orders. After such a hectic five years, the old schoolhouse, close to the sea and surrounded by a vineyard, has proved the perfect escape.

“This is a place for peace of mind,” Sara says. “To be in tune with nature and the ocean is the best foundation – the starting point to being calm and harmonious.” 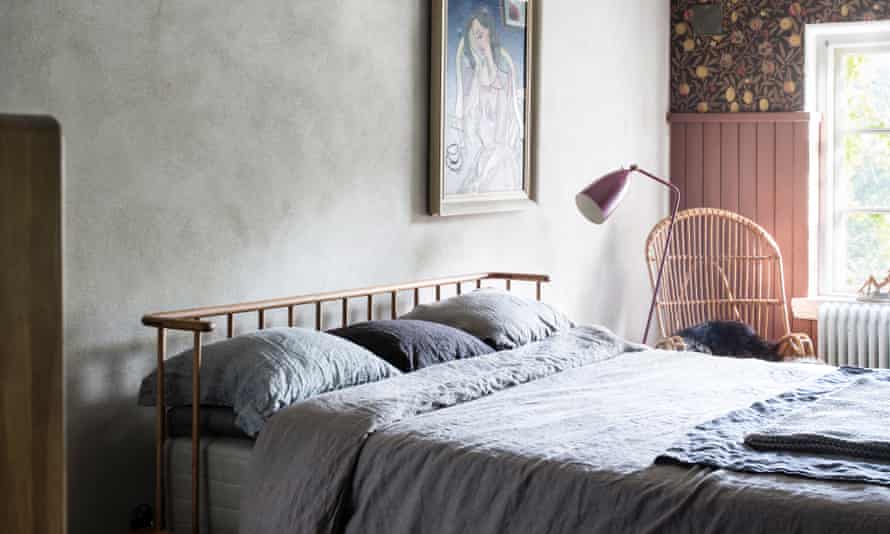 Pillow talk: one of the bedrooms. Photograph: Johan Sellén

“We are totally amazed by the difference in tempo, compared to the big city,” Jörgen adds. “Living with nature, seasonal changes and shifting colours – it’s fundamental.”

Of course, the furniture does suit the space – solid materials and slender forms in the high-ceilinged rooms. In that sense, their home is the perfect showroom, something that the couple always intended.

“At first we intended to be open for the public only during the summer, but when the first week of autumn came and we thought we could have the weekend off, there were plenty of people waiting in the courtyard before we’d even got out of bed. So, we could do nothing but jump out of our pyjamas and go downstairs to open the doors,” says Sara.

How to add self-adhesive wallpapers over the top of traditional wallpapers.

How to Choose a Radiator for Your Home

Halloween Bakeware You Need In Your Kitchen Now!

‘It’s all here on the water’: how Britain’s canals became home to bakers, blacksmiths and florists | Life and style