YOUNG Brits under 30 are the most likely to be hesitant about getting the Covid vaccine, shocking research has revealed.

Those aged 16 – 29 are the most likely to have reservations about it – with most worried about side effects and the long term impact on their health. 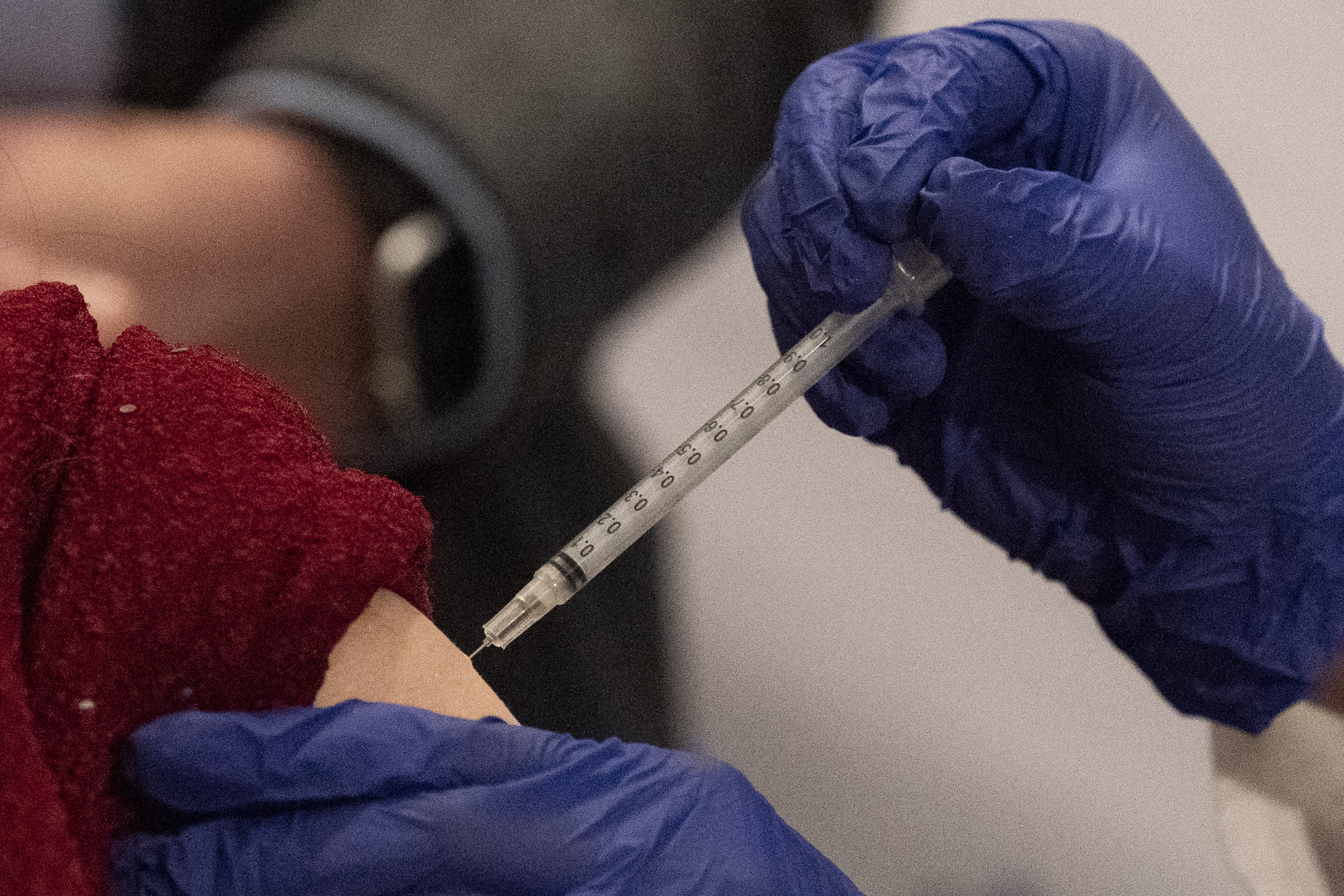 Brits who are younger are even more likely to be hesitant about getting their jabsCredit: AP:Associated Press 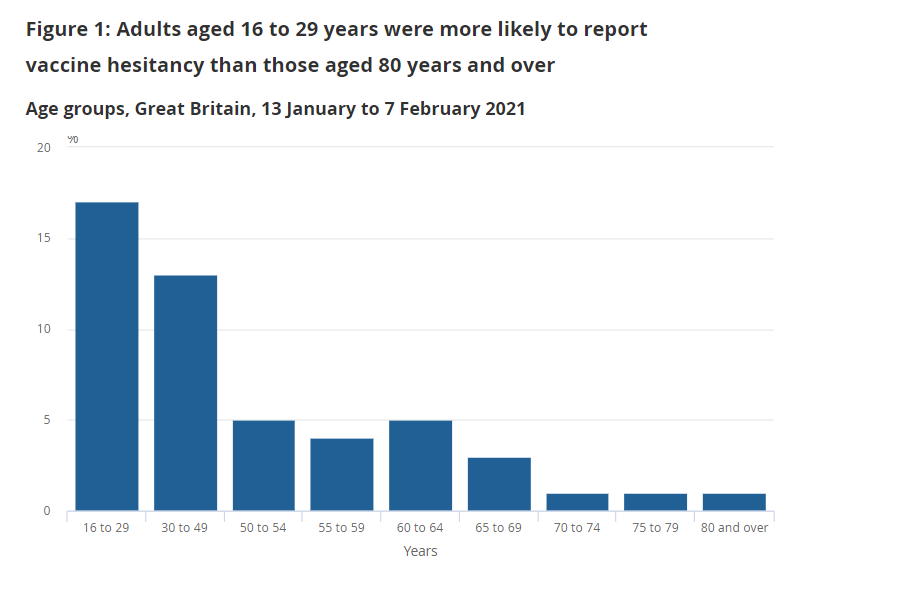 However, In a huge boost for the nation’s rollout, more than nine in ten Brits across the nation said they would get the jab when called.

One in six of those in the lowest age group expressed fears, and young women were also more likely than young men.

And black Brits and those living in the most deprived parts of the country were more likely to have fears about getting the jab, the ONS said today.

Over four in ten Black or Black British adults reported vaccine hesitancy – this was highest of all ethnic groups across the UK.

It was double that of people in other ethnic groups, where no more than two in ten expressed worries.

Nearly one in six of those people living in the poorest and most deprived parts of the country were likely to be hesitant about the vaccine too – compared to around half that in those who were better off.

Nearly half of people with reservations said it was over the possible side effects of the jab, or long-term effects on their health.

Twelve per said said they were scared it wouldn’t work – and eight per cent were against getting vaccinated generally.

The numbers pose a challenge for the Government as the rollout continues.

Although more people were reported to be willing to get the vaccine than was previously thought, the jabs rollout has mainly focused on older and more vulnerable Brits so far who are more at risk.

Boris Johnson has promised every adult will get a vaccine by July – and this week the over 55s in many areas have received letters telling them to book their slots.

Younger Brits are expected to get their jabs within weeks, followed by the unlocking of the rest of society. 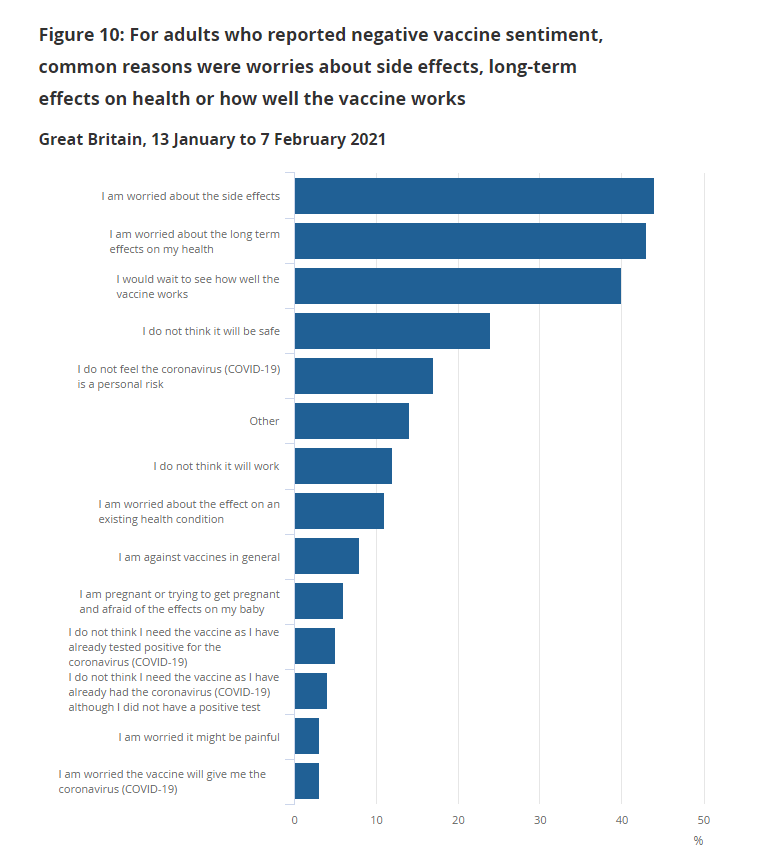 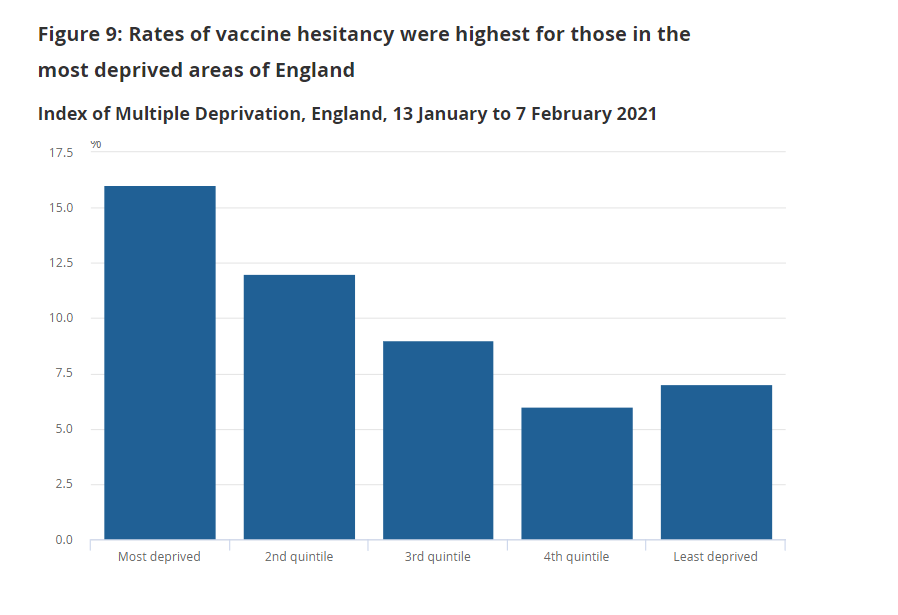 Tim Vizard, Public Policy Analysis, Office for National Statistics said today: “Over the past three months, we’ve seen people become increasingly positive about the Covid-19 vaccines, with over nine in ten adults saying they would have it if offered, or having already had it.

“Of those who are hesitant about receiving the vaccine, it’s younger and black adults who are most likely to say this, with concerns around side effects, long term effects and how well the vaccine works being the most common reasons.”

A No10 spokesperson said today: “As we have done throughout the vaccination programme, we will continue to encourage those who haven’t come forward to take a vaccine to do so.

“You’re aware of the work we’ve done with community leaders and groups to receive the vaccine.

“We will continue to encourage them to do so.

“We have all worked together to promote the safety and efficacy of the vaccine, we will continue to do that.”