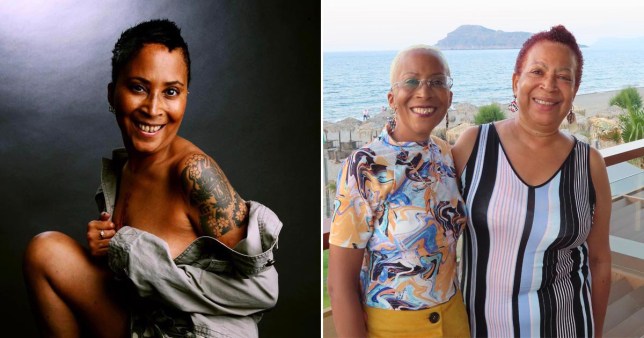 When people ask Lisa Brereton what it’s like to have two heart attacks  – her reply is that she has no idea.

This is because she didn’t realise she was having either one at the time.

Lisa, who works for the NHS, had two heart attacks before the age of 40 – one month apart from each other. The first occurred after seven weeks of unusual pain in 2011.

She tells Metro.co.uk: ‘Over a week I went from being absolutely fine to being in pain: I was feverish, I had pins and needles going up and down my left arm.

‘I had to stop working, as I couldn’t drive or go anywhere without someone being with me and I used to wake up in the middle of the night.

‘It used to be pins and needles in my left arm, which we call an episode. That would last 15 to 45 minutes.’

Lisa journeyed to and from the hospital during this period – but says she never saw a cardiologist. Instead, she was given painkillers to manage her pain.

But one Saturday morning Lisa’s vomit was black.

‘We went down to out of hours doctors and they immediately sent me down to the A&E department – that’s where my heart failure journey started.’

Lisa was taken to the cardiac assessment unit and for an andiogram, which revealed she had a heart attack sometime on Friday night.

Naturally, this came as a shock to Lisa – who explains it hadn’t felt any different from the pain she’d experienced during the previous seven weeks. 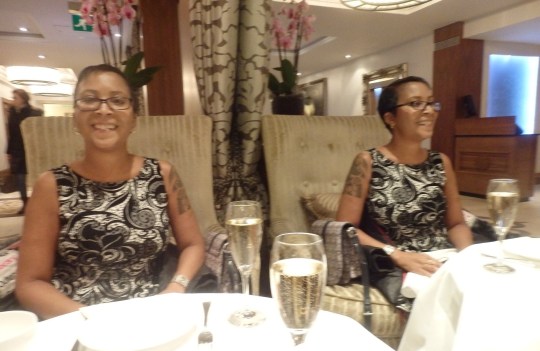 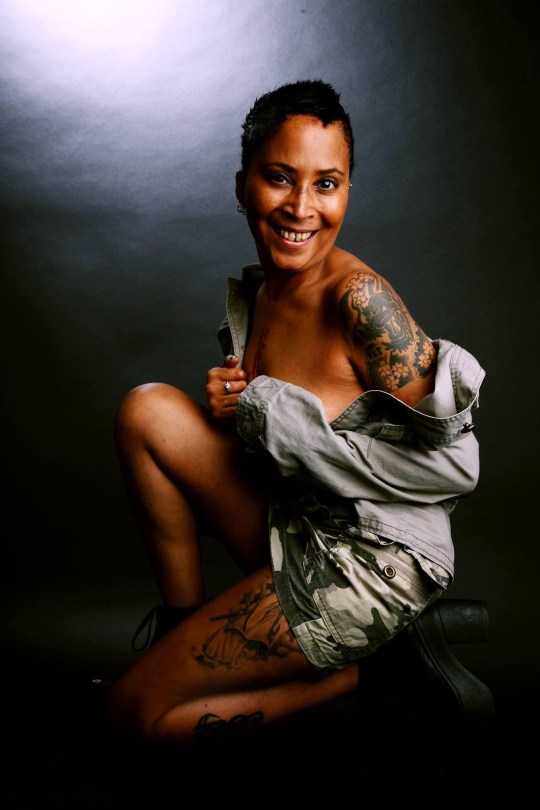 Her second attack happened just one month later – almost to the date.

Lisa said: ‘Again felt hugely unwell and while I was having another angiogram my heart went into distress and I had another major.’

Two years on and Lisa started experiencing further symptoms – including breathlessness and being unable to lie down flat.

Doctors explained that she would need open heart surgery to fix a leaking valve in July 2013.

One of the scariest parts was that Lisa had no idea what medics would be doing until she was under general anaesthetic – doctors would have to decide the best cause of action when she was on the operating table.

She said: ‘It very strange in that I didn’t know what type of surgery I was going to have – because I was still very young. I didn’t know if it would be a repair, a replacement or how many coronary artery bypass grafts I would have.

‘I’m a very controlled person – I like to know. So it was very disturbing for me to go into such critical surgery and not knowing what I was going to have.

‘The preference was to do a repair but if the damage was so bad it would have been a replacement.’

Following the surgery, Lisa was out of hospital within seven days.

Recovery took time for Lisa, but, sadly, this wasn’t the end of the road. In 2014, medics told her that the valve was leaking again and that she’d need more heart surgery to replace it – but she refused.

Lisa said: ‘I’m stubborn, I said no. I wasn’t mentally prepared to go through that again.

‘While you’re recovering there are different things that happen that nobody tells you, like bubbles in your chest and things in your chest that eventually have to come out at some point.

‘There’s a fine line between scaring patients, but I think there needs to be honesty – because we need to prepare for that. I remember seeing these things sticking out my chest and then the nurse explained to me what they were.

‘It was hard at those points, I wasn’t mentally prepared to go through it and have the surgery again. So I said “no” and walked out my consultation room, but had to come back two weeks later when I’d calmed down.’ 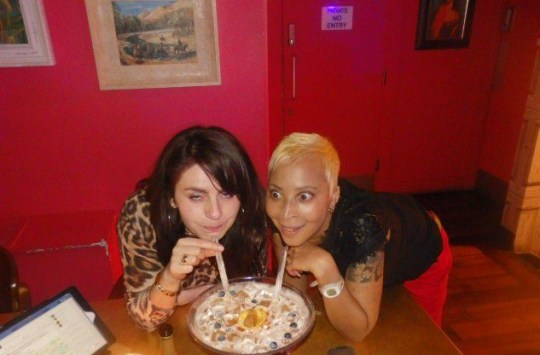 She’s now on a trial drug that is working well (Picture: Lisa Brereton)

As an alternative, Lisa got put on a trial drug – which is still going well to this day.

She adds: ‘As of two weeks ago, surgery isn’t in the near future. So I am still monitored very heavily, obviously.

‘I have four ECGs a year, I see my heart failure consultant twice a year, and I monitor myself. There are different things I have to do like keep an eye on my blood pressure, make sure my pulse is fine and look after myself generally.

‘But that was in 2014 and we are still here and no further surgeries at this moment in time.’

Following her heart failure diagnosis after her first heart attack, Lisa has a new lust for life and has created a bucket list to ensure she experiences everything she’s always wanted to try – even the little things.

Other things she has ticked off include swimming with dolphins, travelling to Malta and getting numerous tattoos.

Lisa has big plans for the future – despite not being able to do the physical activities that she previously would. 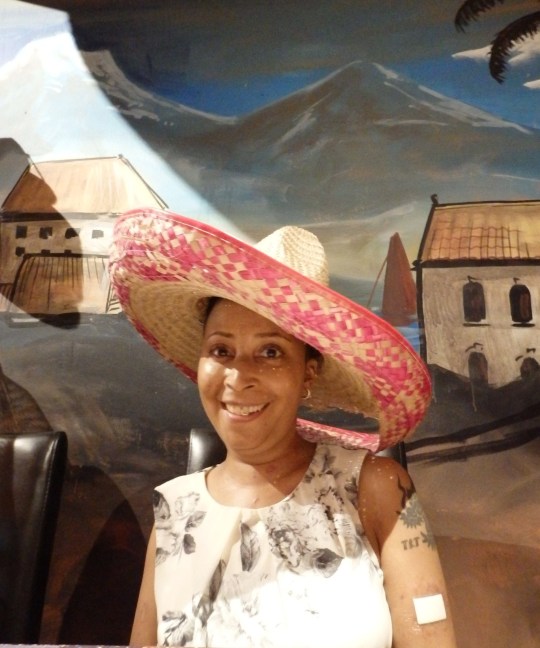 Lisa has made a bucket list to ensure she keeps doing things she loves (Picture: Lisa Brereton) 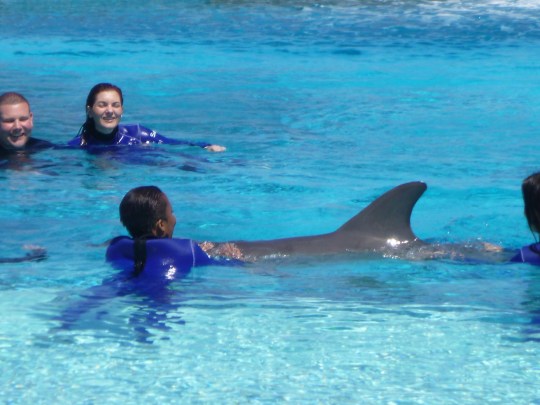 She’s even been swimming with dolphins (Picture: Lisa Brereton)

Before her heart surgery, Lisa was a black belt in Shotokan karate, but had to give this up following her operation, which left her with a metal plate in her breastbone.

‘The risk was too great of being hit in the chest,’ Lisa explains.

‘I don’t now view it as something like “oh my god I’ll never get back to that,” I view it as a proud moment in my life – that’s what I achieved. So I do display them quite proudly with all my other belts.’

Despite not being able to practice that passion anymore, the 48-year-old says she’s adapted to her body’s new limits and now enjoys activities such as swimming, pilates and working out with her personal trainer.

Lisa is also keen to share her story – ahead of the national Heart Failure Awareness Days in mid-May.

Lisa wants people to know that younger people do experience heart attacks and raise awareness of how to support those living with heart failure.

She adds: ‘I call us the “lost group” – those 30s/40s group. If you’re a paediatric patient you’re very well looked after – if you’re older it’s expected, even though it shouldn’t be, that you’ll have a few problems.

‘I think one of the things for me is to be an advocate and a voice for other patients.

‘For heart failure patients, we are all so lost.

‘That’s why I’m working with the British Heart Foundation (BHF) – I think we need to be heard and have a voice.

‘Last year in autumn, BHF published a document called “Heart Failure Blueprint for Change.” It’s a summary about achieving the right care and support for those living with heart failure, to help us live longer.

‘I really would like people to read that document to understand more about what it’s like to live with heart failure.’

She adds: ‘There are three Fs for awareness – fatigue, fighting for breath and filling up.

‘Early intervention is a lot safer for people.

‘If you have any of those prolonged symptoms, please seek help.’

What are the symptoms of heart failure?

You should see your GP immediately if you begin to experience any of these symptoms.