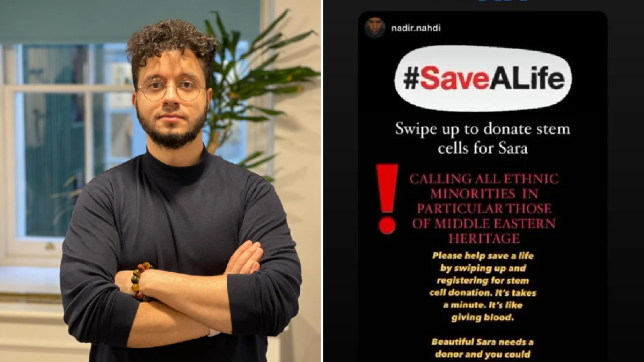 Fizel is calling for ethnic minorities to join the register – to save his sister and thousands like her (Pictures: Fizel Nejabat)

A man whose sister is living with terminal cancer is encouraging people from ethnic minority groups to sign up to donate stem cells – to tackle the huge racial disparity.

Your chances of finding a life-saving stem cell match depend on the ethnic makeup of the stem cell donation register.

Research shows that white Europeans have a 69% chance of finding the best possible match, while people from Black, Asian and minority ethnic backgrounds have just a 20.5% chance.

This narrows down further to 5% if you’re of Middle Eastern descent. This is the case for Sara, Fizel Nejabat’s sister, who is a 41-year-old mother of two with myelofibrosis – a form of blood cancer.

‘Within our family, we call Sara the force of nature. She’s tempestuous, she’s angry, she gets everything done. She’s always always fighting for things,’ Fizel tells Metro.co.uk.

Sara had her first child at 18 and managed to complete her degree with a newborn. She then decided to undertake a second degree just after having her second child, and began a career in pharmacy with two small children.

Sara’s devastating diagnosis came in her mid-20s when she noticed some excessive bruising. Doctors told her she had a rare form of blood cancer which means her bone marrow doesn’t produce blood cells in the correct way. She was told that this illness would eventually take her life.

Medication has controlled Sara’s condition for a number of years, but now, at 41 with her eldest son just starting university – Sara is in need of a stem cell transplant to save her life.

‘There has been just been a huge amount of anxiety for the family over the last ten years,’ explains Sara’s brother Fizel.

‘If you can imagine a mother having to go into hospital every month to check on her blood cells, knowing that at any point, she might be told, “this is the last time you’re going to have this blood test. Now there’s nothing else that we can do for you.”

‘I can’t imagine a mother having to go through that.

‘But throughout all of that, she has raised two phenomenal young men. But she has had to hold so much inside. It’s upsetting. It’s traumatising.

‘The doctors put her onto some extremely intensive and aggressive medication for the last six months. So now we’re at a point where we do need to find a stem cell donor for Sara.’

Fizel says that one of the reasons why the numbers of ethnic minorities on the stem cell donor registration are so low is because of myths and misinformation.

He says too many people don’t realise that stem cell donation is the new name for bone marrow donation, and that the process no longer includes painful extraction using needles. Instead, the process is similar to simply giving blood.

‘People think that when you register you need to go to the hospital and do all these blood tests. You don’t,’ says Fizel.

‘All you do is go to the dkms website with the Anthony Nolan website, you put your address, email and telephone number in. Within three to five days, they will send you some swabs. You put the swab in your mouth, leave it there for 60 seconds, let it dry for five minutes, put it in the envelope, and send it back. You never actually need to visit a hospital.’

When you’re registered, if you are ever called upon to donate, you’ll go to hospital, they insert a needle – like they would if you were giving blood – you stay there for a couple of hours, and then get some tea and biscuits.

‘You have these persistent myths and misinformation, which is spreading, particularly within the ethnic minority,’ adds Fizel. 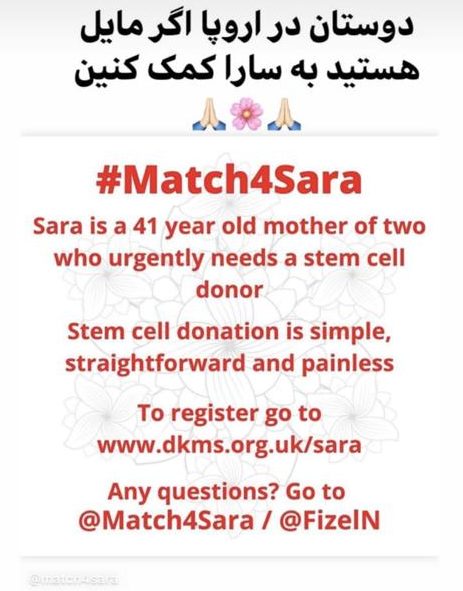 ‘This is another one of those situations where the ethnic minority community suffers far more than the wider society does as a whole.

‘The reason for that is very simple. The make the ethnic makeup of the register.’

There are about 2.5 million people on the stem cell donor register in the UK, the overwhelming majority of them are Caucasian. Less than 4,000 – out of 2.5 million – of those people are Middle Eastern.

So Sara’s chances of finding a match are dramatically reduced.

This is why Fizel is so committed to encouraging as many people as possible from ethnic minority communities to learn more about stem cell donations, and to join the register.

‘If you sign up all the ethnic minorities onto the register, that would actually solve this problem,’ he says. ‘There is an endpoint to this issue. It is like a treasure chest at the end of the rainbow. All we are trying to do is to get as many people as possible to sign up to the register.

‘Obviously, this does have a huge impact on both myself and the family. Quietly and privately, we grieve and we go through it,’ Fizel tells us.

‘I want her to know that we did everything possible. And I want her to feel like the world has done everything it can to keep her here. I don’t know if it will work. I’m not sure.

‘Whatever happens, I don’t want my sister to go out without me fighting for her. That, for me, is the most important thing.’

Cineworld confirms May reopening plans in the UK