DRESSED in black, with her head bowed in sorrow, the Queen looked isolated – and lonely – at her beloved husband Prince Philip’s funeral.

Sitting metres away from family in St George’s Chapel, Her Royal Highness was unable to be comforted despite grieving for her husband of 73 years. 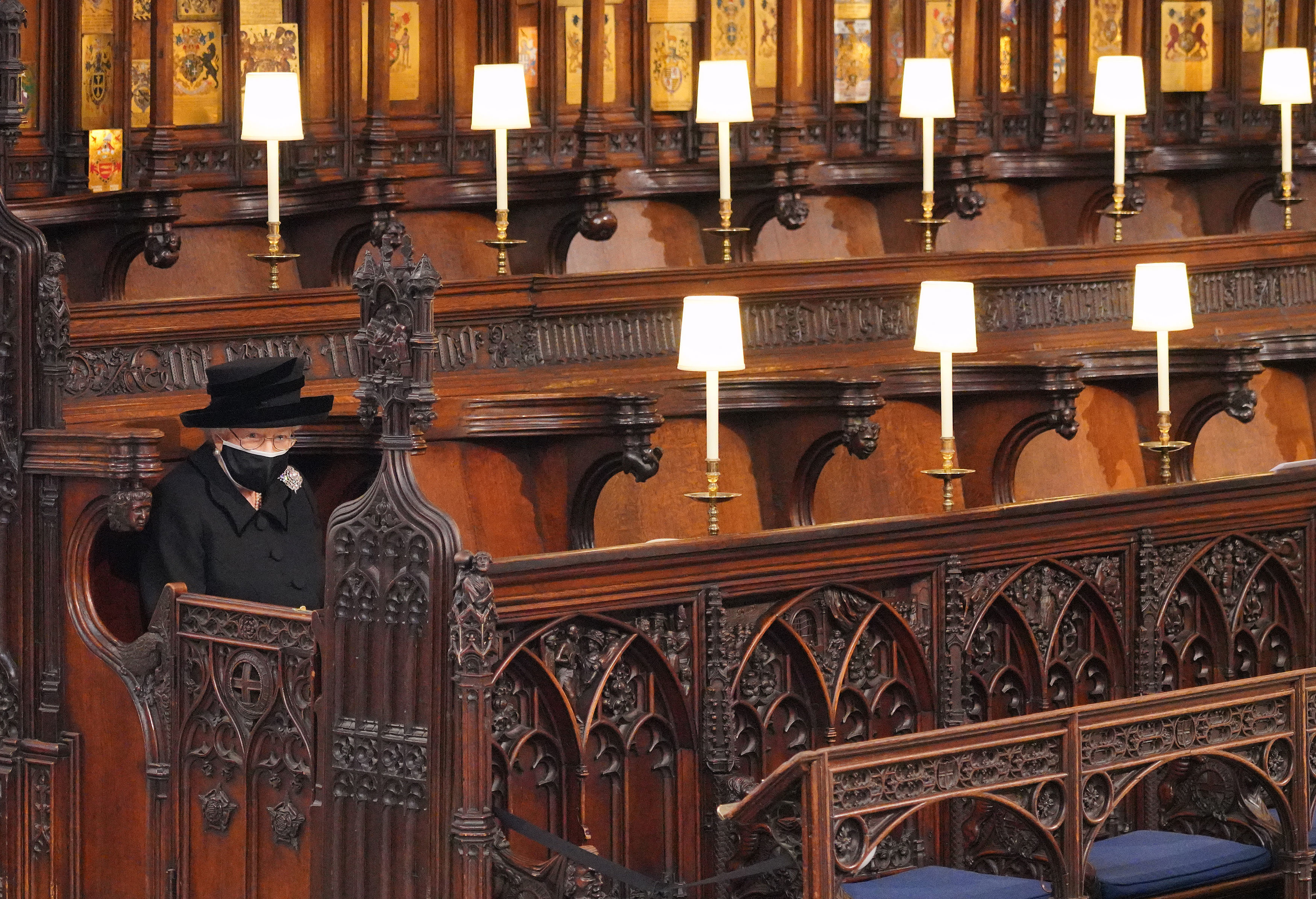 Why did the Queen sit by herself at Prince Philip’s funeral?

ABC News in Australia, for example, noted: “While anyone else might have had a supportive hand to hold, the Queen had none.”

“The Queen sat and mourned alone… nearest the altar, alone in the chapel’s quire, two metres from any family members and wearing a face mask,” wrote the New Zealand Herald.

“Wearing a mask that matched her black dress, hat and gloves, the queen did not take comfort in the physical embrace of her family at the funeral of Prince Philip because of an invisible intruder called Covid-19,” explained NBC News in the US.

With the UK still in the grip of the lethal coronavirus pandemic – and restrictions only recently starting to be loosened – Her Majesty was abiding by social distancing rules.

People must also wear a face covering, as required by law when attending indoor places of worship, crematoriums and burial ground chapels unless you are exempt for health, disability or other reasons, says the government.

Mourners attending a funeral have to stay at least two metres from others outside their household or support bubble.

When it comes to funerals, the government currently allows a maximum of 30 mourners to attend funerals in England – whether indoors or outdoors.

This number does not include anyone working at the funeral. 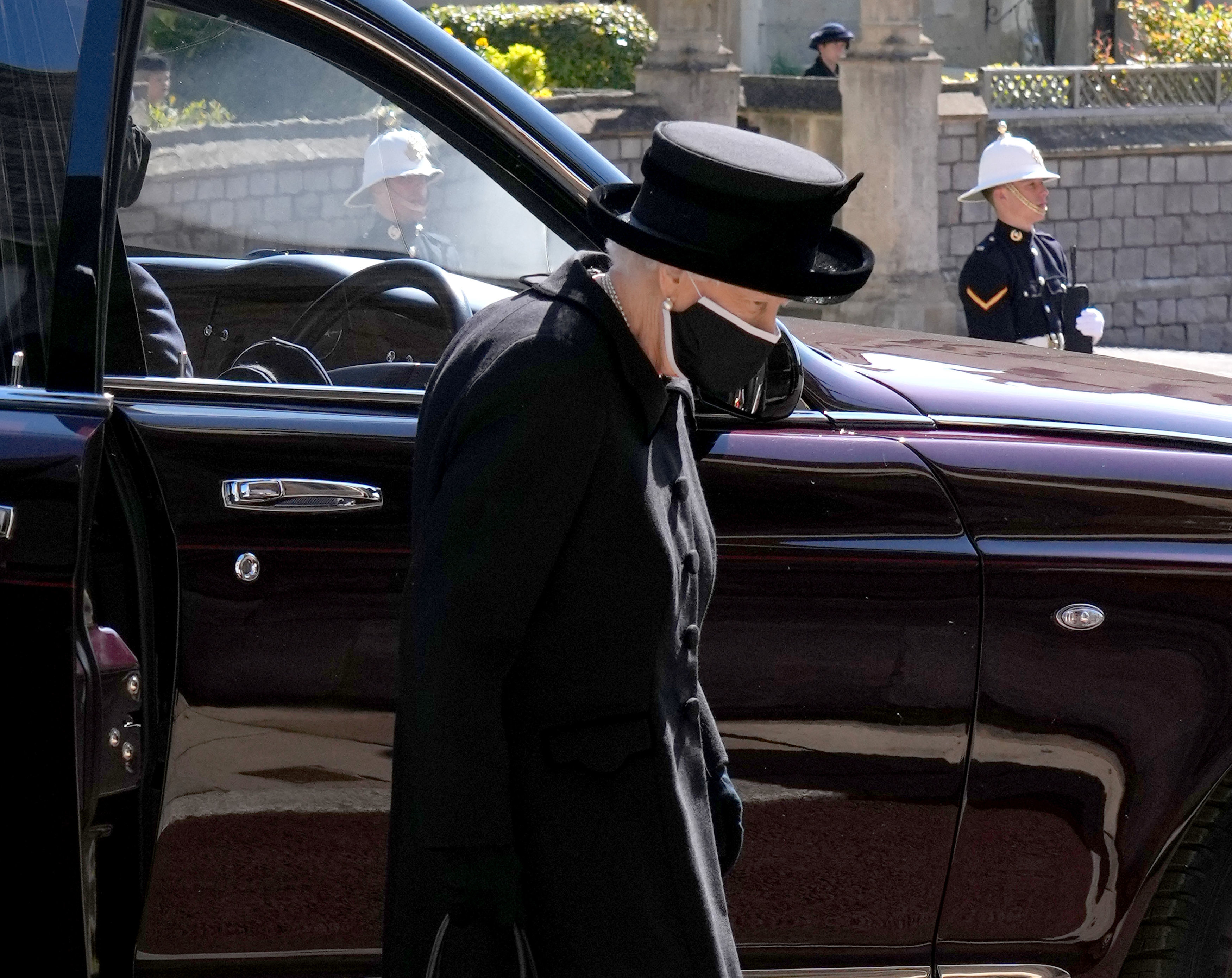 The Queen will reign without her husband by her sideCredit: PA

As the 30 limit rule does not include clergy, the Archbishop of Canterbury and the Dean of Windsor presided over the service on April 17, 2021.

And a small choir of just four people, including one soprano, sang pieces of music chosen by the duke.

However, the sad pictures of the Queen sitting by herself, with no one nearby to comfort her, have prompted some to demand a change in the strict rules for funerals.

TV presenter Kirstie Allsopp tweeted: “I hope the sight of HM The Queen sitting alone, brought home to everyone watching that the time has come to strongly lobby the Government to change the rules for funerals and allow mourning people to judge their own risk, given the success of the vaccination roll out.”

Good Morning Britain presenter Adil Ray echoed her on Twitter, asking: “In honour of the Duke of Edinburgh the Covid funeral rules must be changed surely?

“Close grieving family members must be allowed to sit next to each other, if they’ve had the vaccine or been tested.

“This is so sad to see and being repeated across the country.” 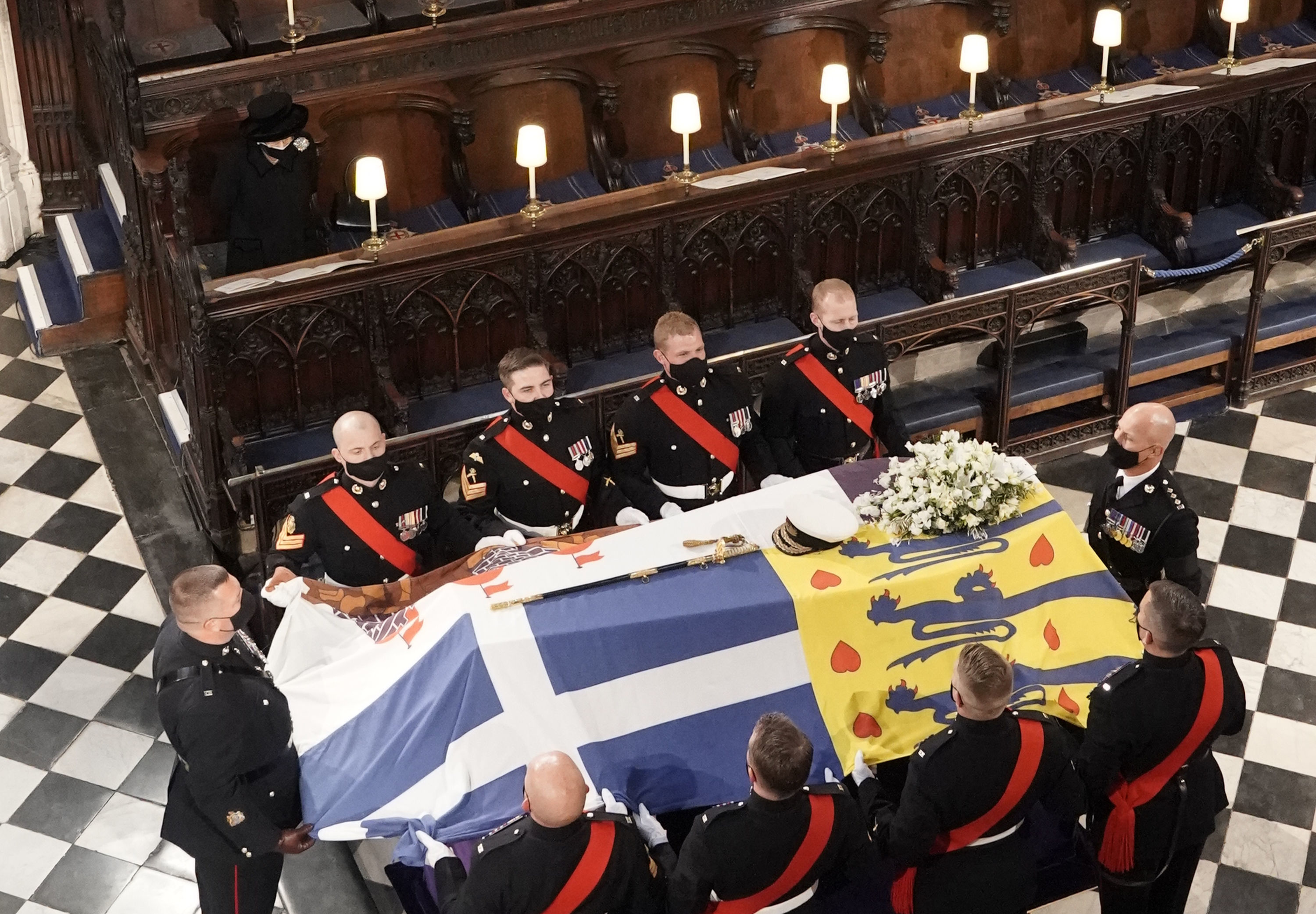 The Queen sitting by herself, as pallbearers carry the coffin of the Duke of Edinburgh during his funeral at St George’s Chapel, Windsor Castle, BerkshireCredit: PA

Who travelled with the Queen to Prince Philip’s funeral?

The Queen’s loyal lady-in-waiting sat with the monarch in the State Bentley to Prince Philip’s funeral.

Lady Susan Hussey, 81, has a strong bond with Her Majesty, having served her for decades.

Both wore facemasks in the vehicle, as it was driven to the ceremony in St George’s Chapel at Windsor Castle, Berkshire.

Lady Susan entered the chapel, but as she was there as a working Royal household member – not one of the 30 guests attending the funeral – she did not sit with the Windsors.

However, she remained nearby in the nave, to be ready to help in case the Queen needed her. 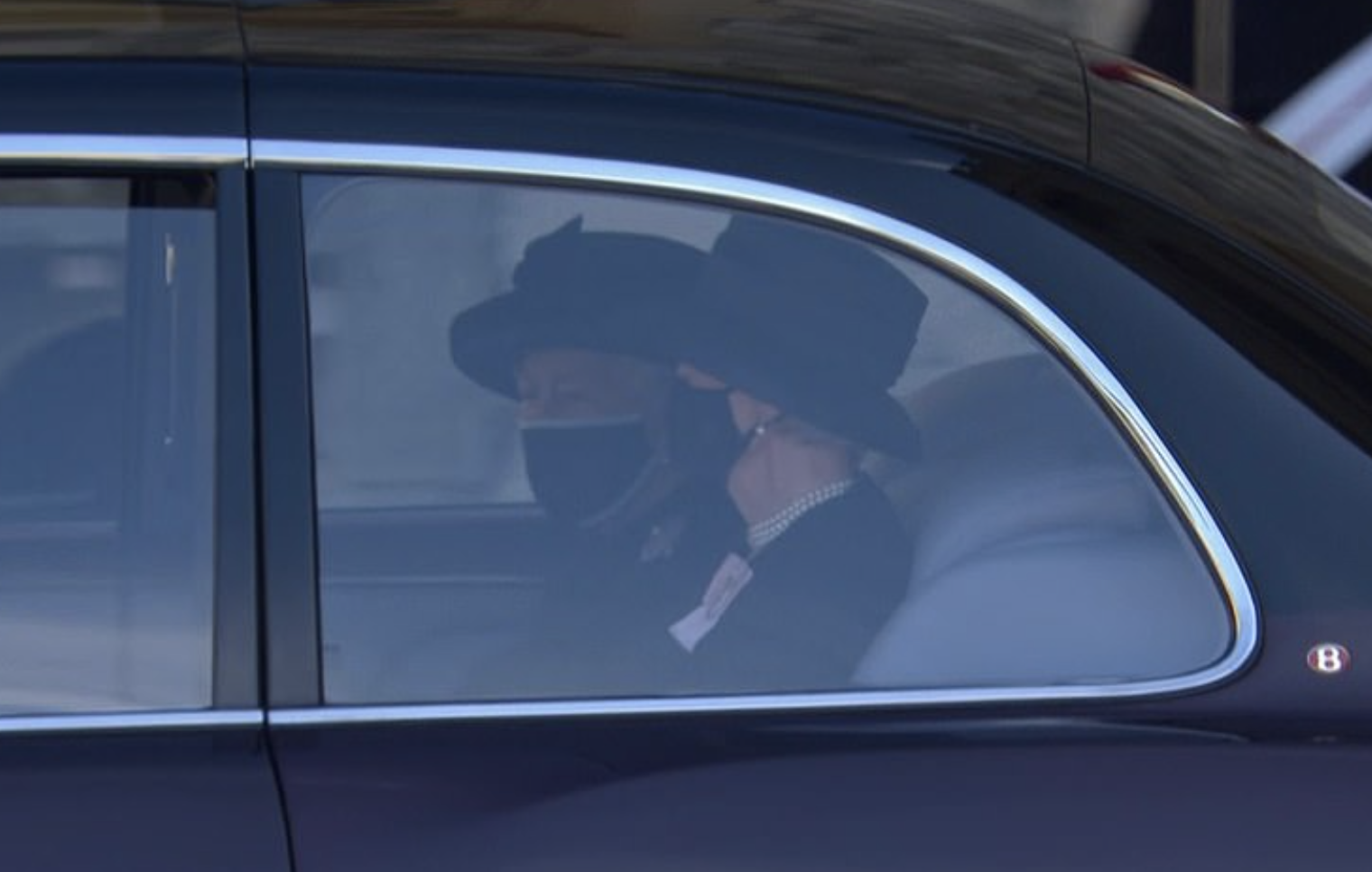 The monarch arrived with her loyal lady-in-waiting

The Times calls her the “No 1 head girl”.

The loyal pal has “been a friend and companion to the Queen since she joined the court in 1960 where she became the Queen’s Woman of the Bedchamber.

“She was initially employed to respond to letters after Prince Andrew’s birth.

“Lady Susan Hussey is also a godmother to the Duke of Cambridge,” the magazine adds. 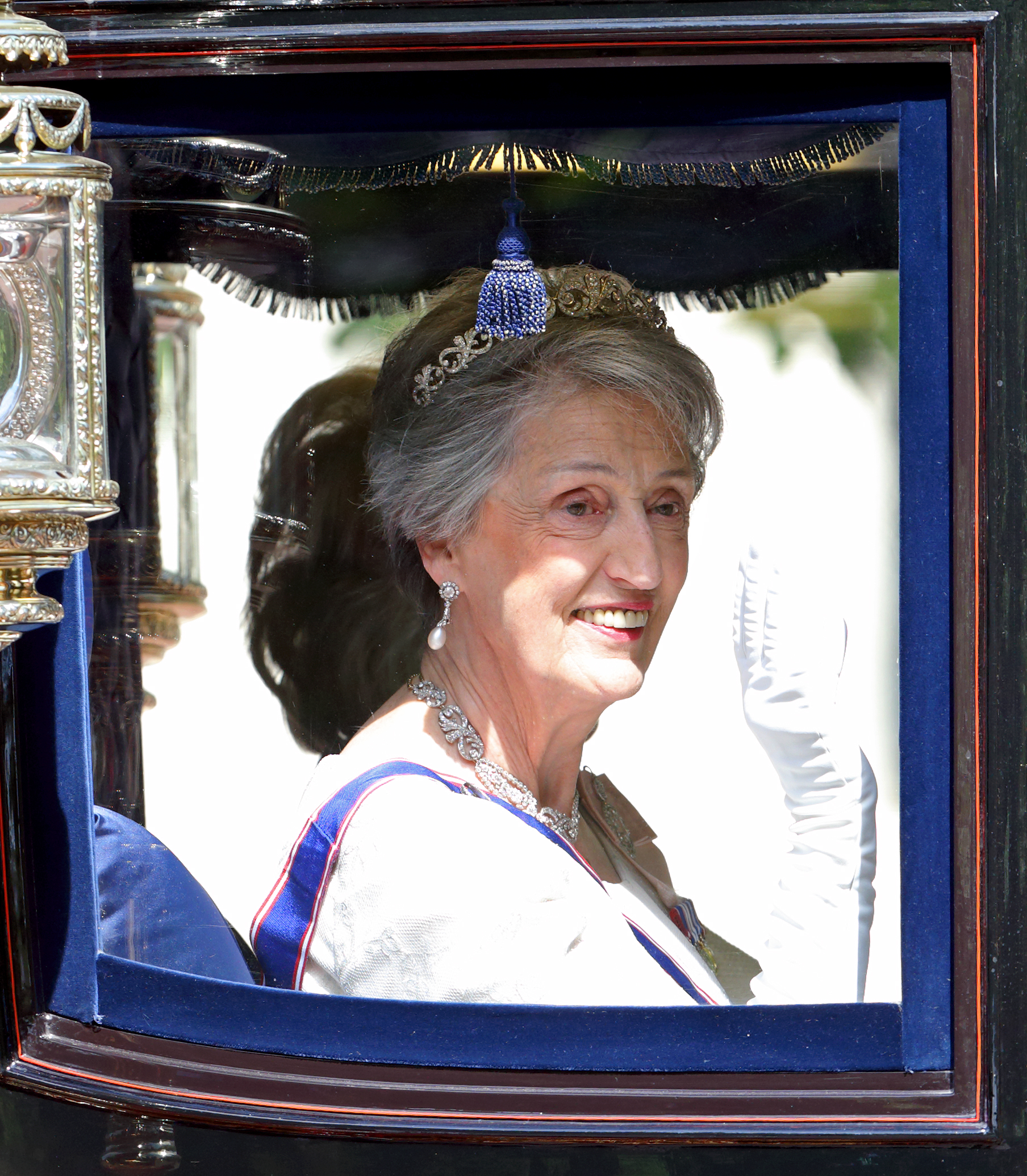 Lady Susan and the monarch have a strong bondCredit: Getty

What does the Queen’s lady-in-waiting do?

Part of the lady-in-waiting’s job is to accompany the Monarch on official duties.

The loyal women are part of HMS Bubble, which is the name given to the team of about 20 staff attending to the Queen at Windsor during lockdown.

They act as friends and loyal assistants, and “have a variety of duties including attending to private and personal matters for the Queen and handling her correspondence,” explains i news.

Enchanted by black holes? We are, too