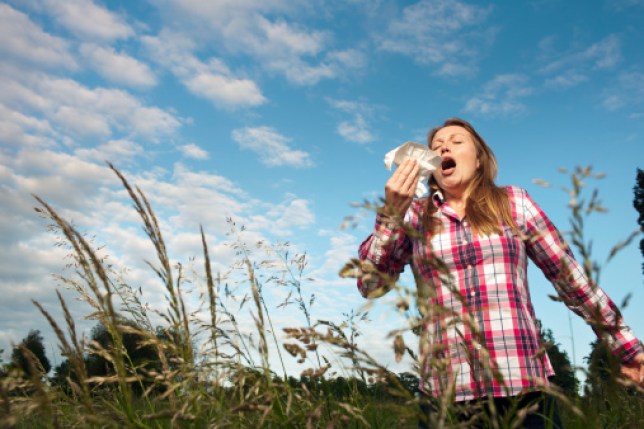 Be prepared before heading out this spring (Picture: Getty)

Spring has sprung, and hay fever season is fully underway with high pollen counts expected to be a regular occurrence over the next couple of months.

For the hay fever sufferers among us, that means a few months of endless sneezing and itchy eyes.

According to Allergy UK, between 10% and 30% of adults suffer from hay fever, along with 40% of children.

Here is everything you need to know about the hay fever season before you head outside, what symptoms you can expect and the best treatments you can use.

When does hay fever season start?

The time of year that your hay fever will be most prominent can vary depending on which types of pollen you are most allergic to.

There is a large variety of pollen types for different plants and trees including ash, birch, pine and nettles. 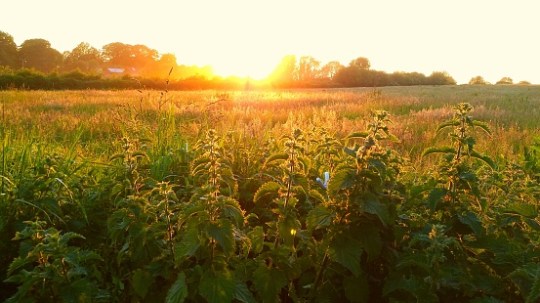 Nettles can cause a hay fever flare up. (Picture: Getty)

Each year the timings of high pollen can vary depending on the weather, and the pollen count is at its highest during warm and windy weather.

Symptoms are often at their worst for the six months between April and September, but the time frame can vary between each person.

The most common groups of pollen that cause hay fever are trees, grass and weeds.

Tree pollen usually peaks the earlier in the year and its pollen count is often at its highest from March until May, although it can stay prominent throughout the rest of the summer in June, July and August.

Grass pollen doesn’t normally start until March or April, but it doesn’t reach its peak until around June or July, and then it starts to decline slightly in August, and then it is usually quite mild by September.

Weeds usually start producing pollen in June or July, but it peaks around August or September, and can sometimes stay prominent in October.

What are hay fever symptoms?

Some of the main symptoms of hay fever can include sneezing and a runny, blocked nose.

In some cases pollen can also cause you to get headaches, earache and you can end up feeling more tired than usual.

There isn’t a cure for hay fever, but there is some medication that you can get from a pharmacy to help treat and reduce your symptoms, including tablets, eye drops, and nose sprays. 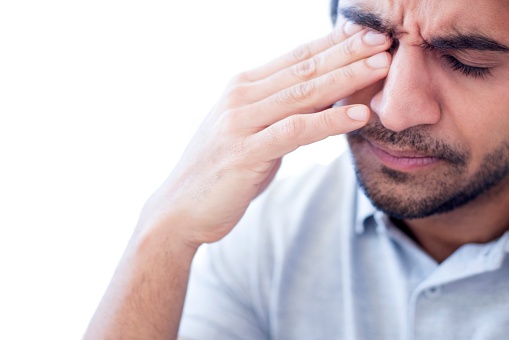 Some sufferers can experience itchy eyes and a loss of smell (Picture: Getty)

It can be worth speaking to your GP or pharmacist to find out the best treatments if you are not sure of the best way to tackle your symptoms.

People who experience hay fever symptoms are also advised to wear wraparound sunglasses to protect their eyes when outside, and use Vaseline around your nostrils to stop pollen from getting into your nose.

It’s also worth having a shower and changing your clothes when you get in from outside, which helps remove any pollen from your body and hair and can help to reduce symptoms in your home.

What is the pollen count in London?

If you’re in the capital and feel limited by your hay fever, health website A. Vogel publishes a five-day pollen count forecast. 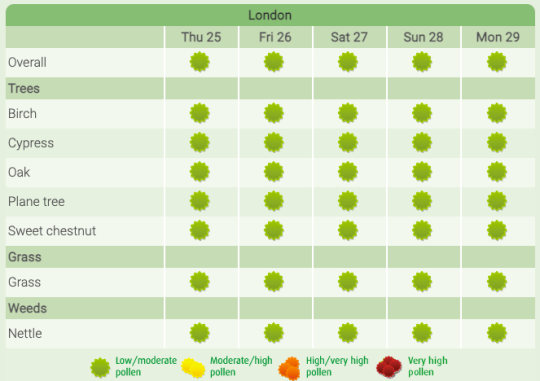 This site gives you a five-day forecast, for all different kinds of pollen (Picture: A. Vogel)

The chart can be tailored to a specific area of London if you’re wanting to be more precise – so whether you’re heading to Clissold Park or Peckham Rye, you should be able to work out if you’ll have a flare-up.

The site also breaks down the count of individual plants if you know exactly what you’re allergic to.

Bristol protester to fight on after ‘being pepper-sprayed by police’