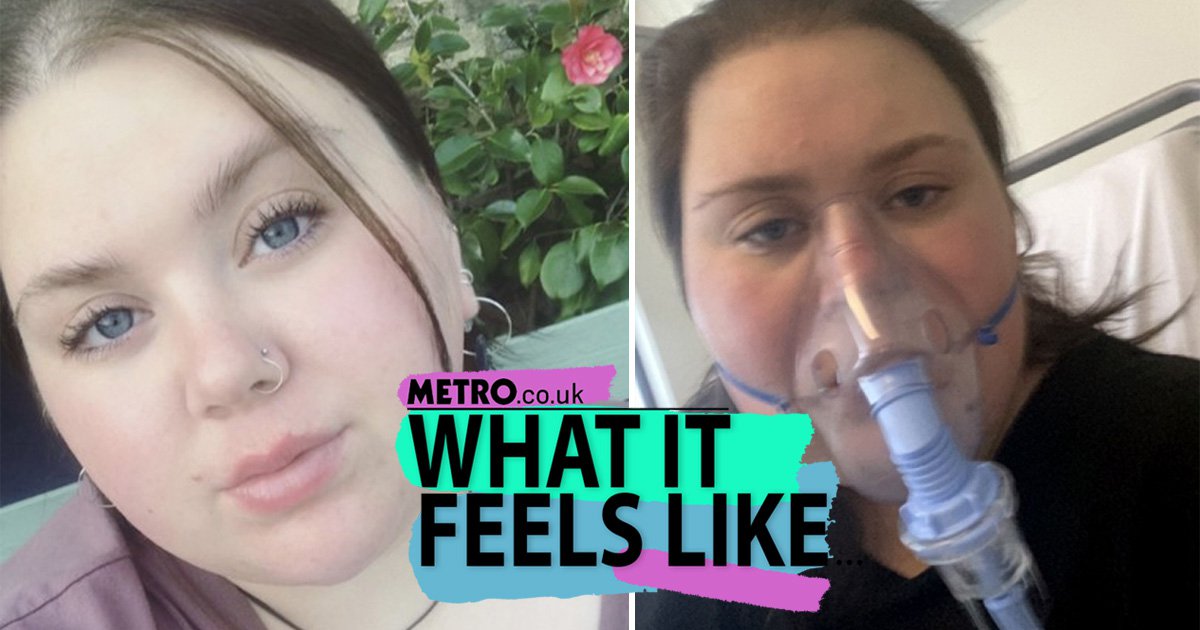 After watching stories about it on the news for months, I thought I knew what lying in hospital with Covid-19 would be like.

I thought people who go in don’t come out; that every case of Covid-19 on those wards would be the worst kind of case.

So, when I was admitted with the virus in January, I feared the worst.

As someone who suffers from severe asthma, I’ve taken precautions to limit my chances of catching coronavirus. I wear a mask outside of my house, sanitize my hands regularly and socially distance wherever I go. Because of this, I thought I was guaranteed to never catch it.

Yet, on 17 January, I found myself in my clean, ‘germ-free’ home, with no prior visitors to infect it, feeling freezing cold. I had the heating turned up, had layered jumper over jumper and was covered in blankets, but I just could not get warm.

Concerned, I ordered an at-home Covid-19 test. In the three days it took to arrive, I’d developed all the typical symptoms of the virus: headaches, dizziness, a cough, no sense of smell or taste, a high temperature, nausea. I felt like death.

To no one’s surprise, I tested positive.

Although I wasn’t experiencing any complications with my asthma at first, I knew I’d have to keep a careful eye on it.

That said, I’m only 23 and besides my asthma am perfectly healthy, so I assumed I’d get off lightly. After all, you rarely hear of young people being severely affected or hospitalised with it.

Having retraced my steps through my head, I concluded I must have caught it when going to Tesco three days before I started to feel ill. Maybe I forgot to wash my hands and had put them near my face? Or maybe it was when I’d taken my mask off after leaving the store?

Five days after I noticed the first symptoms, I woke up experiencing the worst physical pain I’ve ever felt – a sharp, stabbing sensation shooting through my chest every time I tried to breathe (which was an effort in itself, so constricted my airways felt).

I was terrified, thinking that this could be it for me

That’s not to mention how mentally drained I’d become from the loneliness – I’d been isolating from my partner in our home and was rarely seeing him, let alone any family or friends – and the exhaustion from my retching and lack of sleep. I just wanted it all to end.

Soon, I had the worst asthma attack I’ve had to date. I was panicking, trying and failing to catch my breath. I felt as though I was suffocating. It was the scariest moment of my life.

My partner called for an ambulance, but the operator told us to make our own way to the hospital – there was a one-hour wait due to high demand.

Hearing this alone built anxiety; the huge backlog of people needing help highlighted how serious the NHS’s situation was.

I don’t remember arriving at the hospital – I was in and out of consciousness – but I have vague recollections of masks and people wearing full-body, astronaut-like suits, bustling around in chaos. It was like something out of a disaster film.

I was terrified, thinking that this could be it for me.

After medical staff regulated my breathing and I used a nebuliser (a machine that lets you inhale liquid medication), I was feeling slightly better and thought I’d be able to go home that day, but was soon told my oxygen levels were too low and I’d have to stay and be monitored.

I’d never had to spend a night in a hospital before. I was scared – especially as I was all alone and not allowed visitors – but knew this was the best place to be.

After about an hour and a half, when multiple tests had been done and standard procedures followed, I was moved to an ICU Covid ward where I was told I’d tested positive for the South African strain, which I’d heard about on the news.

I was panicking and trying not to cry; current reports were expressing the dangers of this new strain. I wanted to call my family and talk to them about it, but I didn’t want them to worry or seem weak; I already felt like a fraud being in the ICU.

Everyone around me was lying unconscious, hooked up to machines and with countless tubes coming out of their bodies. I didn’t need any of that.

Seeing a person’s chest being pumped up and down to keep them alive is something I won’t forget. Two people flatlined that day and were rushed away – I don’t know if they survived.

I gained an insight into how precious life is, how easily it can be taken away and how I should look after my body more – something we all should be aware of

I broke into tears of sorrow, fear and worry. I thought the same was eventually going to happen to me – why else would they have put me on this ward?

Thankfully, after only two hours in the ICU, I was moved to a regular Covid-19 ward. My bloods had come back normal and my coughing had seized, so I was no longer deemed to be under immediate threat. It felt reassuring to be leaving intensive care.

I was monitored every hour. With a cannula in one arm and medication pumped into the other, I started to feel better. For the first time in five days, I didn’t feel sick, I could taste the food I was eating and the spells of dizziness had gone.

The irony is, I didn’t want to go back home at this point; I felt safe in hospital now. I was surrounded by the best team of nurses and was being given medication that took the pain away – I thought when I left I’d just relapse.

But once I was back at home I got better, improving more every day.

That was seven weeks ago and although I still feel extreme fatigue, the effects on my mental health have been worse than any physical symptoms I still have.

I have flash backs on the suffocating feeling I felt every time I sit at the end of my bed and paranoia every time I feel a slight temperature rise. I think: is it me? Do I have a temperature? Even if it’s unlikely, what if it’s Covid-19 again?

I also have anxiety about going out and potentially being exposed to a new strain.

I even have some hesitation toward having the vaccine, not because I think it’s ‘unsafe’ but because I could have slight side effects of coronavirus again, which would mean I might have to relive how weak I felt – a trauma I want to avoid.

But I’m one of the fortunate ones; I’m alive and breathing unassisted.

I gained an insight into how precious life is, how easily it can be taken away and how I should look after my body more – something we all should be aware of.

As tedious as it is hearing this, please stay safe – if not for yourself then for all the people fighting so hard for their lives.

I was only in hospital overnight, so I guess I should count myself lucky. But I will never be able to unsee the traumatic events I saw