A LEADING Oxford professor has said it is inevitable new Covid variants will arise – but vaccines will prevent severe disease and deaths.

Professor Andrew Pollard attempted to temper fears that new variants will render vaccines useless after the Oxford/AstraZeneca jab was found to be less effective against the South African variant.

Professor Andrew Pollard, director of the Oxford Vaccine Group, said it is “inevitable” new variants of Covid will emerge like the flu. He is pictured receiving his Oxford/AstraZeneca vaccine on January 4

The director of the Oxford Vaccine Group, who led trials of the Oxford jab across the world, said new variants will continue to cause mild disease like the flu and common colds, regardless of vaccines.

He suggested – as other scientists have before – that Covid will be around forever but the population will gain immunity towards it, and suffer a mild illness if they are infected.

New variants will reinfect people who have already recovered from Covid as they evolve and gain new strengths.

However, “the really important point though is that all vaccines everywhere in the world where they’ve been tested have still prevented severe disease and deaths”, Prof Pollard said.

Speaking to BBC Radio 4’s Today programme, he said: “I think that is perhaps the clue to the future here; we are going to see new variants arise, and they will spread in the population, like most of the viruses that cause colds every winter, but as long as we have enough immunity to prevent the severe disease, hospitalisation and death, we are going to be fine in the future of the pandemic.”

It comes amid alarm that the British-made coronavirus vaccine has “minimal effect” in preventing mild disease from the South African variant.

A study, involving some 2,000 people, most of whom were young and healthy, suggested that vaccinated people can still fall ill with moderate Covid and pass it to others.

Prof Pollard, a professor of paediatric infection and immunity, said of the findings today: “I think in many ways it’s exactly what we would have expected, because the virus is introducing mutations as we’ve discussed before, to allow it to still transmit in populations where there is some immunity.

“We already knew in South Africa that the virus was able to cause mild infections in people who were infected earlier last year.

“In a way the study in South Africa absolutely confirms what we understand about the biology, that the virus has to transmit between people to survive, it has to mutate to do that, and it’s done that in South Africa already, and that will affect mild disease in people who have been vaccinated.”

It comes after the deputy chief medical officer for England said it was “not a surprise” to learn that people would likely need booster vaccines to protect themselves against new variants.

The PM has said he is “very confident” in the vaccines being used in the UK. Pictured: A temporary vaccination hub at the Colchester Community Stadium, Essex, February 6Credit: AFP or licensors

Members of the public receive a dose of a Covid-19 vaccine at a vaccination centre set up at Villa Park football stadium, home ground of Aston Villa, in BirminghamCredit: AFP 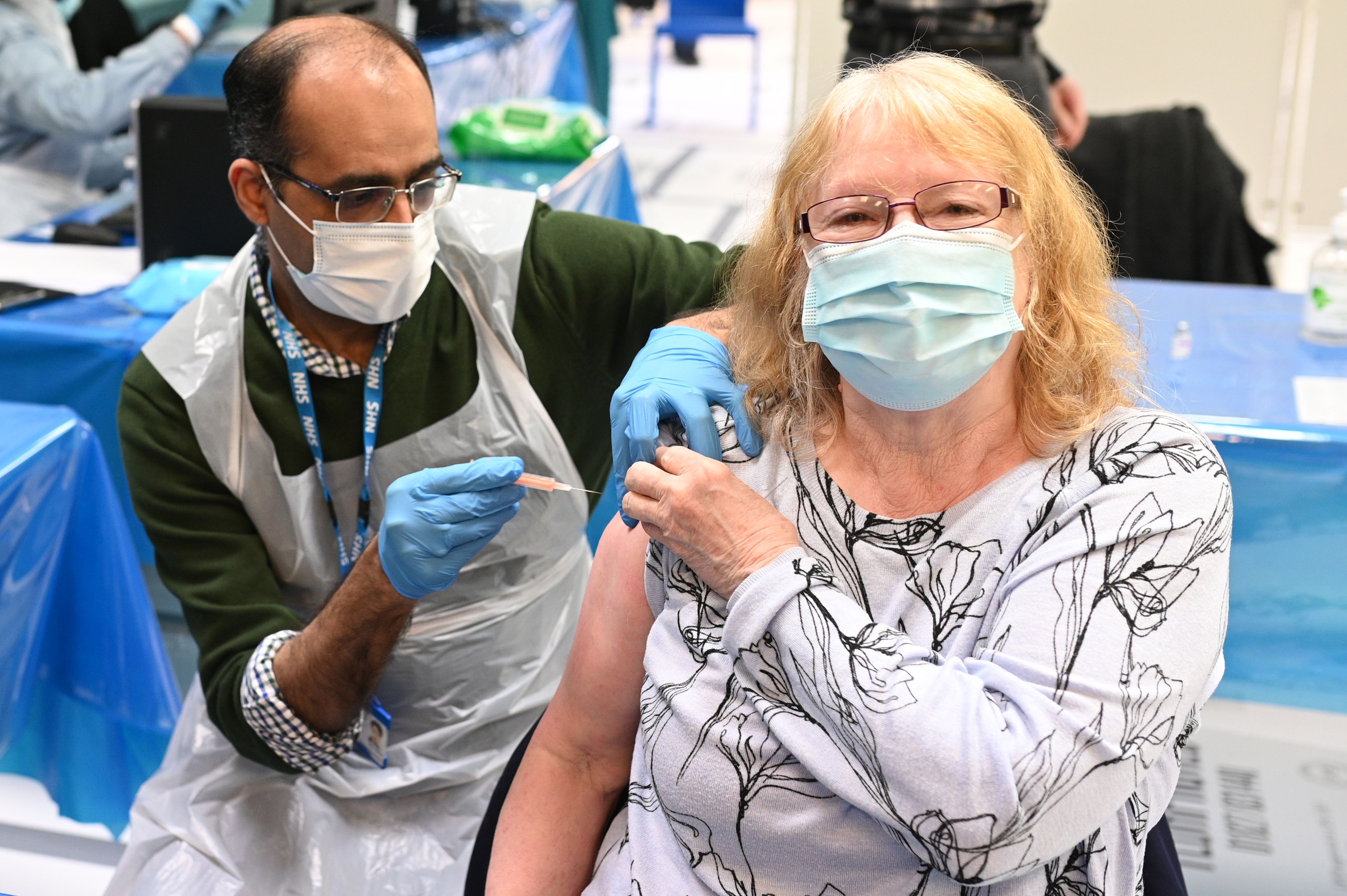 Prof Pollard said: “The really important point though is that all vaccines everywhere in the world where they’ve been tested have still prevented severe disease and deaths.” Pictured: Pharmacist, Murtaza Abdulkarim (L) administers a dose of the AstraZeneca/Oxford Covid-19 vaccine at the Al-Abbas Islamic Centre in Birmingham, West Midlands on February 4Credit: AFP or licensors

Professor Jonathan Van-Tam said if the South African variant did become more prevalent in the UK, people in high risk groups could be given an updated vaccine.

It would likely be a single shot either one every year or two years.

“You can be re-vaccinated and we are taking a lot of steps behind the scenes to ensure that we can be in that position,” Prof Van-Tam said at Monday’s Downing Street briefing.

The study of the Oxford jab in South Africa could not conclude whether the vaccine worked against severe disease in cases caused by the South African variants because the participants were young.

But AstraZeneca said it believes the jab will still protect against severe disease caused by the mutation.

And the lead researcher in the Oxford team Professor Sarah Gilbert told BBC’s Andrew Marr show on Sunday: “Maybe we won’t be reducing the number of cases as much, but we still won’t be seeing the deaths, hospitalisations and severe disease.

“That’s really important for healthcare systems, even if we are having mild and asymptomatic infections, to prevent people going into hospital with Covid would have a major effect.”

One prominent SAGE adviser claimed the finding meant “more restrictions might be needed for longer” in the UK, where 147 cases of the South African strain have been detected so far.

Dr Mike Tildesley, who advises the government as a member of the SAGE sub-group SPI-M, told the BBC Radio 4 Today Programme on Monday: “It means that even with high levels of vaccination there will be a lot of people that could potentially get infected and could potentially pass it on and it may mean that more restrictions might be needed for longer if we can’t get on top of this.”

Dr Mike Tildesley, an infectious disease expert from Warwick University, said it was “very possible” the South African variant is already quite widely spread in the UK. 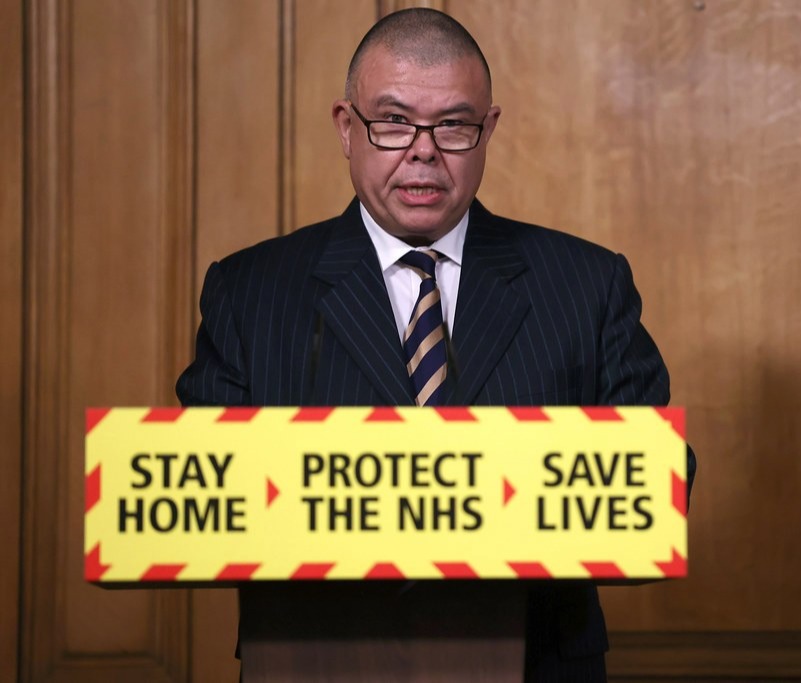 Professor Jonathan Van-Tam, pictured at Monday’s Downing Street briefing, said it was “not a surprise” to learn that people would likely need booster vaccines to protect themselves against new variantsCredit: Simon Dawson / No 10 Downing Street / BEEM

Prime Minister Boris Johnson has not ruled out the possibility lockdown will be extended if the South African variant continues to spread.

But speaking during a visit to a coronavirus test manufacturer in Derby, he said he was “very confident” in the vaccines being used in the UK, insisting he has “no doubt that vaccines generally are going to offer a way out”.

Prof Van-Tam played down the prospect of the South African mutation becoming the dominant strain in the UK despite concerns the true number of cases could be several times higher than that detected by testing.

He said the South African mutation did not enjoy a “transmissibility advantage” over other variants.

The South African variant accounts for around 90 per cent of new coronavirus cases in South Africa, which has put its rollout of the Oxford/AstraZeneca vaccine on hold.

Professor Salim Abdool Karim, head of South Africa’s Ministerial Advisory Committee on Covid-19, told Times Radio “our problem is we don’t know if the AstraZeneca vaccine will be effective in preventing severe disease and hospitalisation in the population”.

But Prof Pollard claimed today the pause of the jab rollout in South Africa was so officials could reassess how to use their doses effectively.

Meanwhile, a study published on Monday suggested the Pfizer Covid vaccine does work against the South African variant.

Samples of blood from 20 vaccinated people were taken two to four weeks after their second jab.

And researchers at the University of Texas Medical Branch at Galveston found the vaccine does block the virus with the N501Y and E484K mutation.

The N501Y mutation – which gives strains an ability to spread more easily – is found in the new Kent, South African and Brazil variant.

But it is the E484K mutation, found in the South African and Brazil variants, which is the most concerning, because it can “hide” from the immune system.

The mutation has been discovered in a number of the cases of the Kent variant, too.